Room in the heart...if not the brain 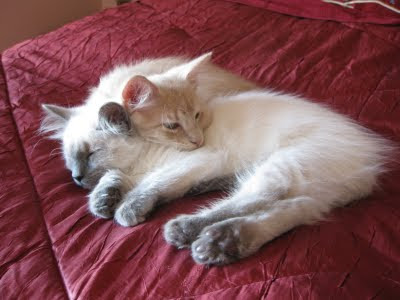 (I have just four grands so far...grandkitties...above are Cessa and Hensley. I get videos of them almost daily!)

We just read the obituary of daughter of one of the former Presidents of Brigham Young University (the LSD ground zero shall we say...)

All I could think of was "Wow, she must get up early every morning, start the coffee and get busy making another birthday cake."

Then I realized she wouldn't have been one to drink coffee as a Mormon.
Maybe that gave her more time to bake cakes.

If each of her kids married...that would be 28 "kids" plus she and her husband...so 30 b-days a year just in the immediate family.

The grandkids must have married to make great grands...so that would be 176 people

Plus 144 more from great grands, assuming they were all too young to marry.

340 birthdays a year. That's a lot of cake and candles to deal with!
My favorite line in the obituary: The laundry was always done, and there was always a nutritious hot meal on the table. Mom even made most of her children's clothing.
Keeping the laundry "done" for just the two of us stumps me sometimes...having it "done" for sixteen people? I'm in total awe.
(The SLC obits are often amusing/interesting. Recently one woman was memorialized with the phrase "She loved to iron." Another woman received "She was greatly loved inspite of herself"
while another said "She was greatly affected by the human condition". I had to wonder if she had a choice there...being human and all...)
Around here it is pretty typical for a woman to have 20+ grandkids. Women my age usually have ten or eleven or so. Holidays are a big deal...the "family" comes home for the holidays and Christmas dinner for forty or fifty seems pretty standard. Women don't downsize when the kids leave home...they shop for bigger homes to house the growing family over the holidays!
The other day I eavesdropped on a woman surrounded by three younger women. They were examining three part buffet warming servers. It was really cute to see them discuss the pros and cons and then excitedly decide which was was going to be just right for the holiday meal.
I should have hung around to see how many they bought ;-)
One buffet server surely wouldn't have been enough.
What really makes me laugh is listening to the older men. They usually will admit that after the first thirty grandkids were born, that they pretty much lost count. (One old guy's obiturary noted that he had "over thirty grandchildren". Another one noted that there were a certain number of great grands and "two more in the oven".)
A lot of the old guys aren't really sure how many grandkids they have.
They will tell you that they can't remember all their names...
And the great grands?
Um...yes...they have some. The oldest is...um....twelve...or maybe nine...and there were two more born last month...
Birthday parties?
Yeah. Lots and lots of birthday parties.
And then they change the subject to golf.
Posted by Thoughts on Life and Millinery. at 10:26 AM

Reminds me of the local Amish community here in the northlands.

Oh my - it would be hard to keep up wouldn't it? My grandmother had over 30 grandchildren - I was one of the last and she was never sure which one I was. I'm not going to be like that! (to be fair she was over 80 at the time)

Wow. I thought my mother's family was fairly sizable (good country farming family - you birth, rather than hire, your farmhands). Let's see...my grandfather died when I was almost 3, but my grandmother died about 12 years ago at 89. They had ten children, four did not survive childhood. One never married. The remaining five had 25 kids...I lost count after 62 great-grands...and last I heard, we have something like 40-some great-great-grands. No, I'm not counting any spouses. Our family get-togethers are a hoot, with everyone asking each other, "Now who's your mother?"

I forgot to say: the babies are precious!! It would be hard to keep from picking up and cuddling them!

I'm smiling as I think of all the birthday cakes that would need to be baked...since I am baking two today for my twin granddaughters. And I am wondering what I started...now that I have six grands!

I love the obit quotes...and can identify with 'being loved in spite of myself'.