Oh...but it was only three o'clock by the time my beauty treatments were done.

There was so much more to do on such a fine day. 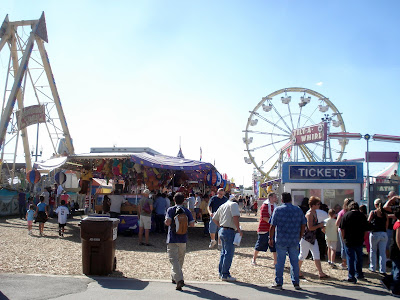 (Bernie had earlier told me he wasn't interested in the event, so I was on my own if I wanted to go.) 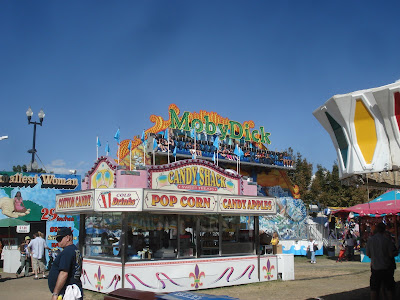 Seriously...don't all State or County Fairs look exactly alike?
I really didn't even need to tell you where I was! 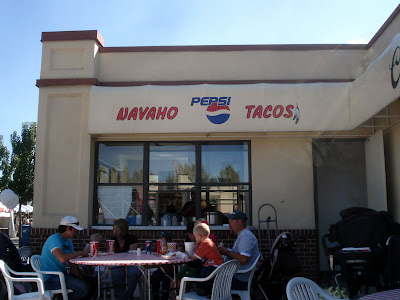 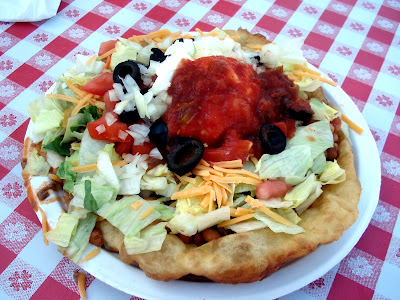 (Not made WITH or BY any Navajos by the way...no Navajo, or any other Native People, were injured in making this taco!)

Navajo fry bread topped with traditional taco ingredients. It cost nine dollars and it would have nearly feed a family of four. I ate about a third, enjoying every bite, and was full.
Another "must do" item checked off my Salt Lake City list. There are "Home of the Navajo Taco" restaurants around town, and I'd been meaning to see what it was all about. 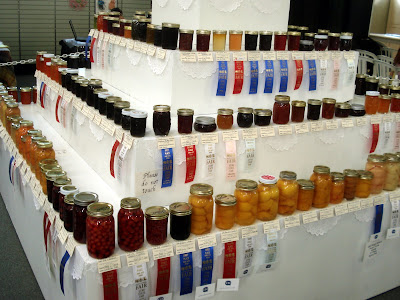 Here are some on display... 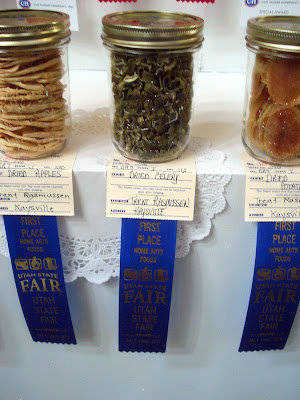 With award winning goodies such as "Dried Celery." 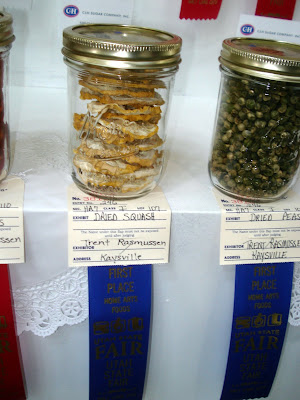 And dried squash? Who would of thunk of such a thing? 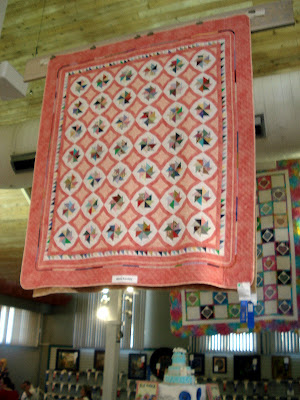 Beautiful quilts were everywhere...this one would look great in my bedroom. 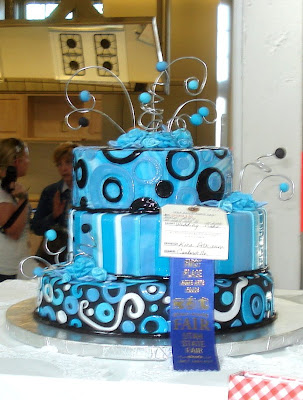 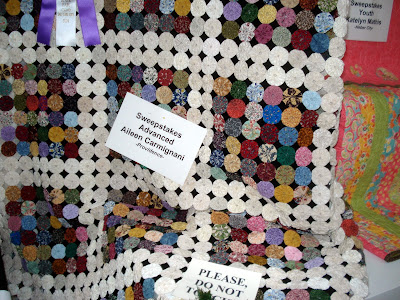 I've made yo-yos...this beauty represents a serious chunk of time. 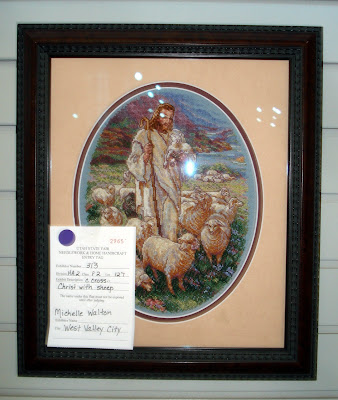 There were plenty of counted cross stitched pictures, with stitches so fine the finished work appeared to be a painting or photograph. 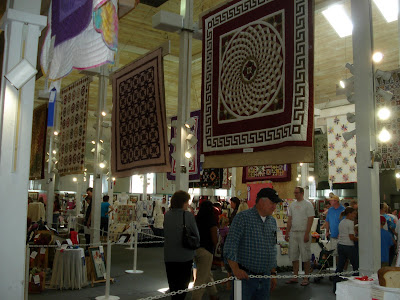 It was hard to take it all in but I did my best. 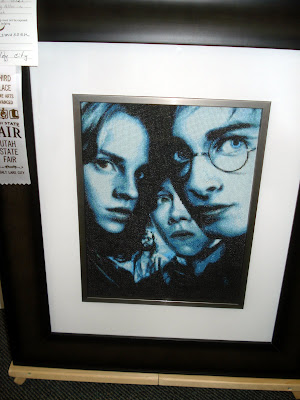 I'm mystified why it was done, but I did admire the cross stitch work of the Harry Potter cast mates. It looked just like a photograph or a movie poster!
There was also a cross stitched Monopoly game board.
Another mystery...I'd love to why they did it. 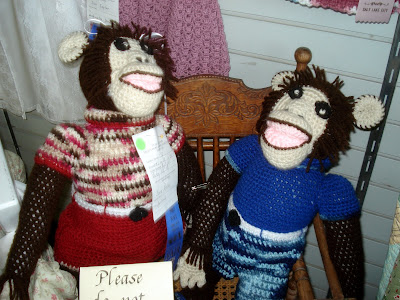 Now I had always thought sock monkeys would be made from socks.
No so.
Apparently sock monkeys can be made without killing any socks if you know how to crochet. 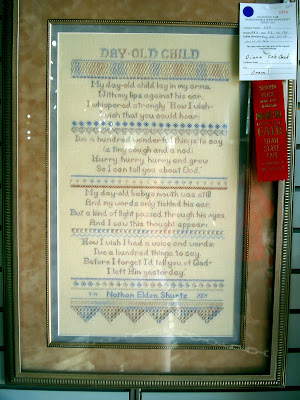 Such sweet thoughts even if a questionable theology.

I remember being a tad sad when I realized my first day with each of my children was over. It is such a special, special day.

My question: how long should/would this stitchery stay up in a child's room?

Where would you put it after the kid turns, say, fifteen?

Could you just pass it around to family members to use until the baby is a certain age?

Discuss these questions among yourselves. Prepare a five minute speech explaining your conclusions and present to the class, along with your notes in one hour. 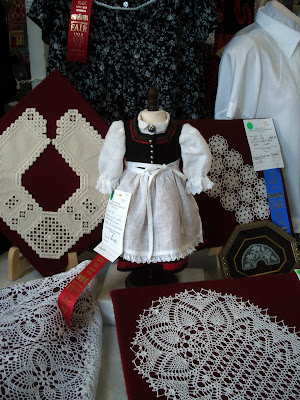 I love dolls in ethnic costumes. And crochet or tatted doilies.

Interestingly, these items rarely elicit much admiration from men.

I wonder why that is.
Feel free to ask the men in your world about what they think about when they see crocheted doilies.
It could be the beginning of an interesting discussion.

I was very impressed by this dress that was worn by a beauty pageant contestant. Miss Wyoming or Miss Idaho...something like that.

I'm serious. I love that dress.
Maybe because it is a formal with sleeves.
Sleeved formals are so hard to find.

From Home Arts I crossed over to the Floral Arts building. 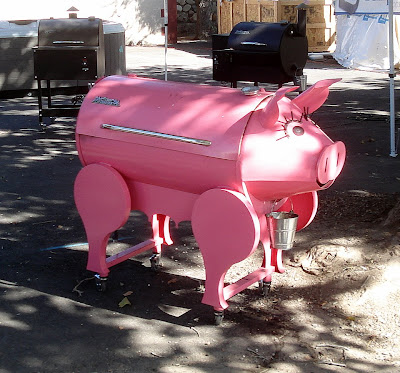 On the way I saw this. I never knew I wanted a pig shaped barbecue smoker oven.

Isn't it just too cute, cute, cute?
I wonder if the guys out there would think the same thing. 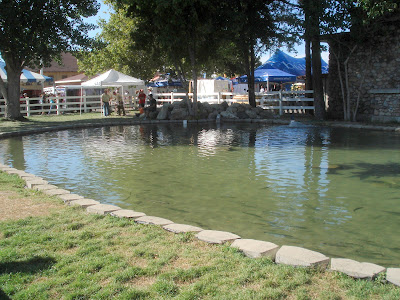 I passed a well stocked fishing pond, where kids could learn to cast a fly line. 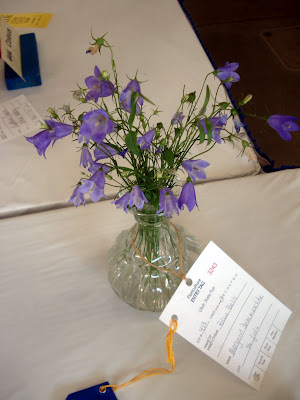 And was VERY glad to be back inside of air conditioning again to view the flower show. 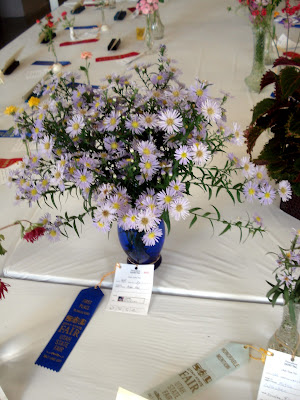 Or maybe home grown wild flowers were used. I was inspired. 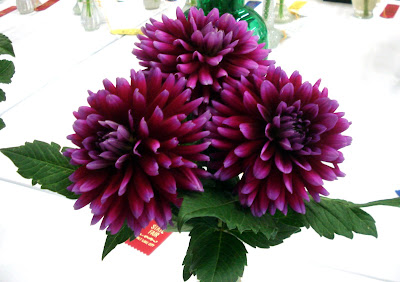 Of course I was thinking of dahlias that my son and my dad have grown.

(Theirs have been amazing!) 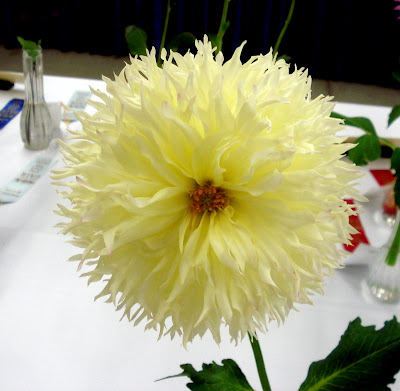 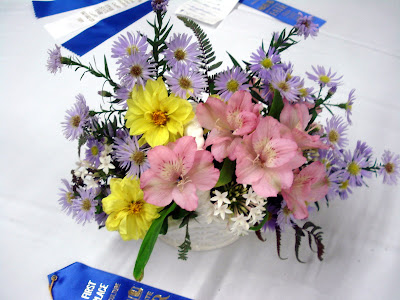 Arrangements were made to illustrate various stage productions, like Music Man or My Fair Lady.
I can't remember which play this arrangement was to represent, but I liked it very much. 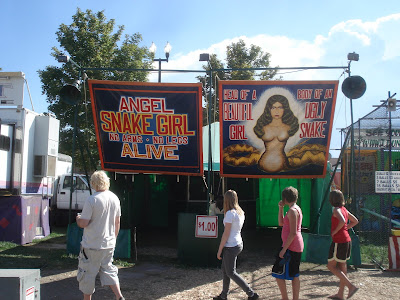 From the Flower show I headed over to the Crafts show. Along the way was this sideshow.
Each fair I've ever been to has the same slightly sad and definitely weird kind of side shows...
(No, of course I didn't go in and see. But my heart ached a bit for her.)
To be continues.....
Posted by Thoughts on Life and Millinery. at 7:12 AM

Oh now I'll be on a quest the rest of my life to eat a Navajo Taco! I really like that dress, too. Gotta go and write my speech...

wow. . .that's a fair .. It really seems that everything is done just a little bit better down there. I really loved all the displays ..

I'd love one of the tacos. . .
Where is class meeting? What time?

More fun every time I check your blog!

The new header is so fantastic with the dark-light contrast!

That green dress is so pretty! And those quilts!

I had to store all of my Mamaw's crocheted and tatted doilies when a certain male in this household began using them as drink coasters!!!! I had one of her intricate tatted doilies framed, by the way.

Fairs are certainly a mix of the pretty, ugly, and odd, aren't they?

That is some fair you have out there...and you did an in-depth tour!

That is some fair you have over there! And you did an in-depth tour.