My next stop at the fair was the Arts and Crafts building. In San Diego I used to be totally wowed over the things people made.

Here...well, the Beehive State of Utah is a little different than the Golden State of California. 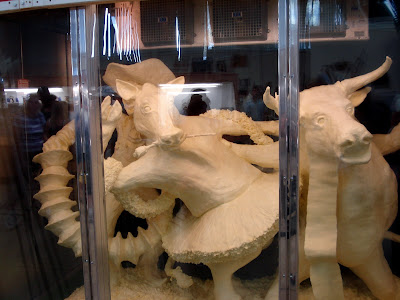 In Utah they make dancing cows sculpted from 700 pounds of butter...the butter having been re-cycled from the frozen cow sculpture of last year.
Wonder why the solid butter cows weren't also deep fat fried?
(Actually the cows were nearly life sized. Otherwise I am sure they would have been rounded up and fair food fried.) 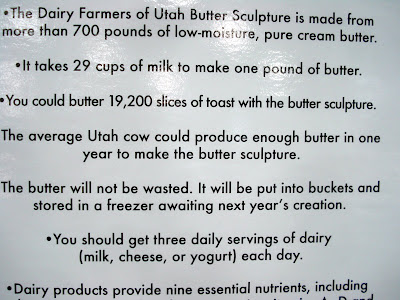 The Dairy Association drove the point about butter sculpture home with this sign.

I did learn something new: 29 cups of milk are needed to make one cup of butter.

I suspect that ratio would vary with the kind of cow that was being milked.

(I learned a bit more about dairy cows at a later stop.) 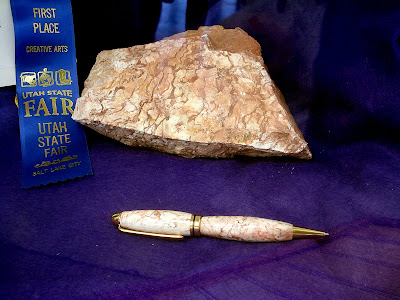 Knowing it would be very hard to top dancing cows sculpted out of butter, I got a grip on myself and proceeded to look through the rest of the show. I'm glad I did: this pen fashioned from pretty pink marble was very cool. 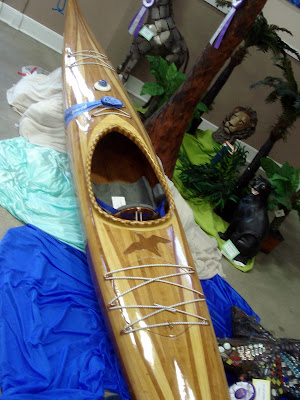 Some one made an amazing kayak. The extra step to inlay the bird design and the opening border impressed me a lot.
. 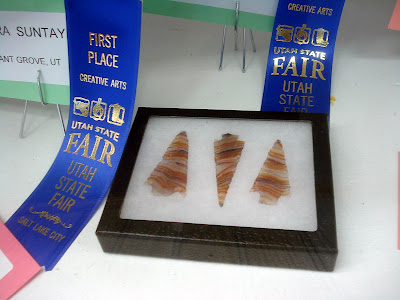 Now if I were given such beautiful stone, I confess my first impulse would not be to chip arrow heads out of it. I wonder if the artist was a Native American.

I also wondered if my cousin Casey still has the arrowhead that I found out in the desert while we were family camping when were kids. I traded the arrowhead for a blue glass bottle that he found. I think if I saw him again (and it has been well over 35 years since I have seen him...) I would ask if he wanted to trade back. That tiny arrow head barely an inch long. I'd have it made into a necklace now. 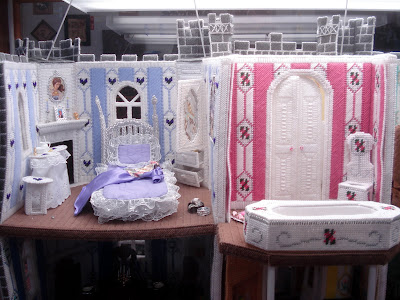 Can't you feel the love that went into this plastic canvas needle point doll house?

Please vote in the comments. I have a hunch I know the answer, but just want to check to see if my instincts are right. 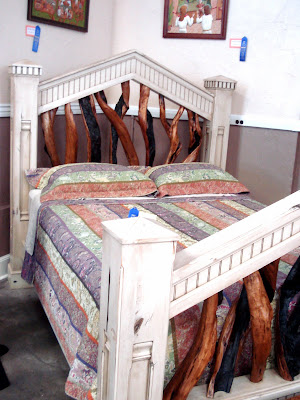 This bed: Is it a "he wanted" and "she wanted" mix? I think it is amazing. Never would I have thought of combining classical looking frame with natural mesquite wood. I'll bet it is pretty darn romantic in that bed on a snowy night in a room lit by firelight. 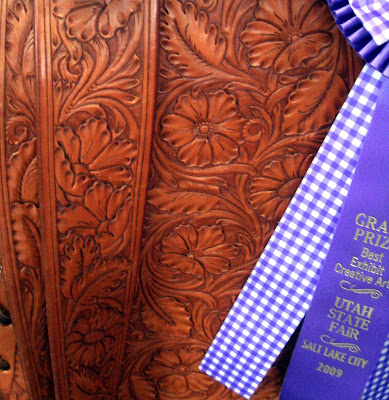 A hand tooled leather saddle took Grand Prize. It was gorgeous work. It even smelled wonderful as I leaned close to get this picture 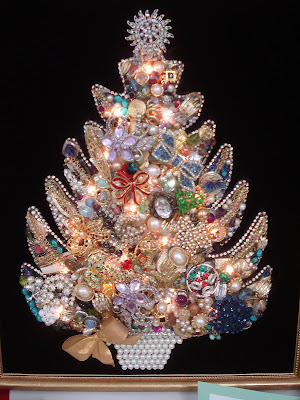 These jewelry Christmas trees have always fascinated me. Left over bits of jewelry combined to make a tree against a black velvet background, and sometimes tiny lights are even worked in to make it glow.

Kitchy, but I tend to be drawn and distracted easily by glitzy and shiny things.

Always have been, and hopefully I always will be. Glitzy shiny things are fun! 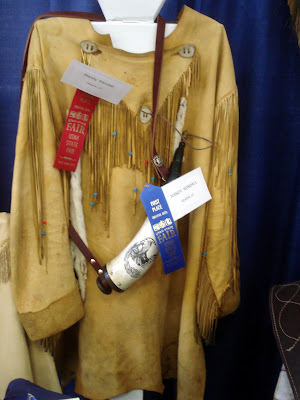 Now I wanted to know if a Native American made this...shooting the deer, skinning it, tanning the leather, sewing it, fringing it...making the horn. If it was some blond white guy making it it would still be interesting. I'd want to know why he was doing it...where he intended to wear it...and what if he got fat and couldn't fit it any more: would he make another one?

Question. I always have so many unanswered questions. 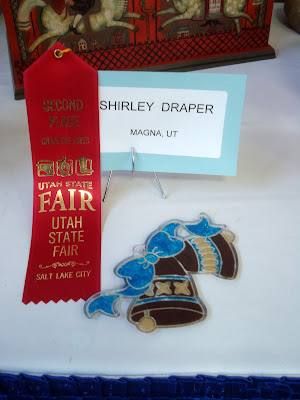 At first I didn't get the prize for this little painted plastic ornament. 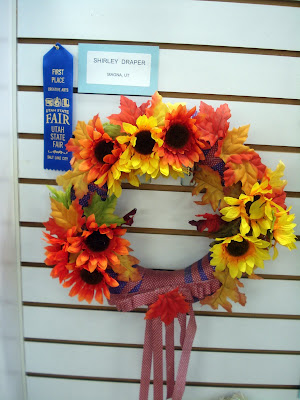 Or this one. But then I read that people's names were attached to different colored cards, and could either be a professional crafter, an adult, a child, a senior, or mentally or physically disabled. that last classification was designated with a blue card behind the person's name.

It made me proud that the Utah State Fair intermixed all the levels together, and this person's work really was wonderful after all. 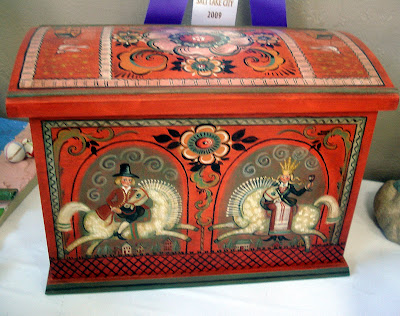 A wedding chest. The more I looked at it the more I liked it. 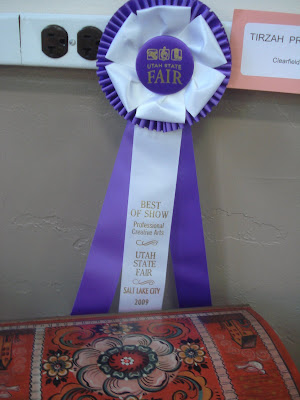 Apparently so did the judges. 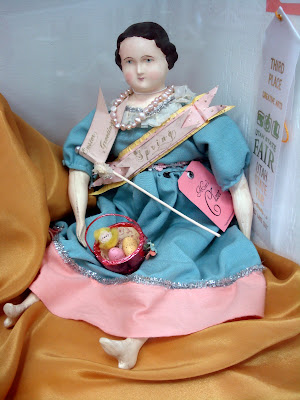 Such a sweet and humble little doll.
I was charmed.
Over a quarter of the Arts and Crafts hall was dedicated to scrapbook pages.
Not a single hat was to be seen.
Eh...a few glances at the pages and I was on to my next stop at the fair.
To be continued...
Posted by Thoughts on Life and Millinery. at 4:58 AM

Ugh, all that butter makes my stomach hurt...and just looking at it makes me feel so fat. ;)

There are so many neat and interesting crafts!

gross butter. I vote bed from grandpa. It would probably last longer.

What, no hats? Maybe you will need to correct this oversight next year...

The guy who sculpts butter must have a huge freezer!

I'd rather have a wooden dollhouse made by grandpa.

The tooled leather saddle is my favorite!

The wooden dollhouse by grandpa...gets my vote.

Wow...your dairy farmers over there are extravagant. I'm thinking there must be a surplus of milk in the state. Quite lovely cows though...I must admit.

You need to start a hat section for next years fair.
The doll house. . .grandpa's wooden one please.
The bed. . .neither. .it was a mistake I think. . is that mean?
Your SLC is amazing.

Y'know, I did forget to vote for the dollhouse. I'd definitely prefer the wooden one built by grandpa. We can furnish it with the plastic canvas bedroom furniture (with working dresser drawers!) that my MIL made for granddaughter Laura oh-so-many years ago!