Before and After: Master Bathroom 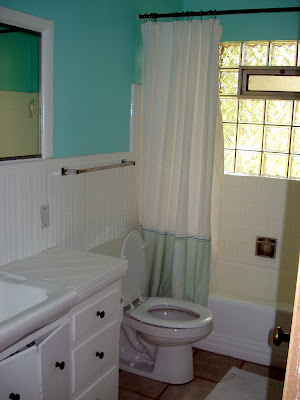 I really did like it as it was "before"...pity that the sink and tub had been painted with epoxy paint to address the worn surfaces. Beneath the white epoxy the original tiles were dusky pink with a narrow grey ribbon of tile for added detail. The sink had been the same shade of pink as the tiles too.

Save the Pink Bathrooms!!!

Drat...we were to late to save this one. So at the same time the kitchen was gutted, the bathroom was gutted too. 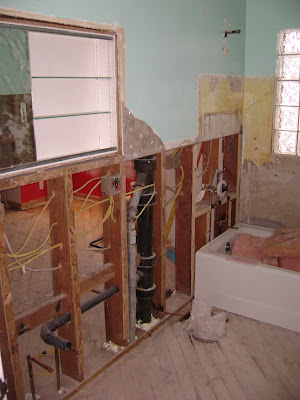 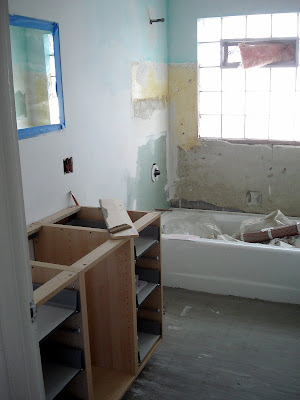 I insisted the glass block window be left alone. And that the double sliding mirrored medicine cabinet be reused. The light fixture and the faucets in the sink could also be re-used. I was just bummed that the original wavy tiles couldn't be saved.

Bernie had a vision for having black cabinets installed. I wanted a 1950's pink bathroom. We talked, looked at tile...he found a great black and white tile pattern called "Whirlygig" that was just perfect.

I wanted a heated floor. I wanted a deep tub. I wanted a tall toilet. I wanted a shower curtain (I had had more than enough of trying to keep glass shower doors lime deposit clean...)

I wanted a deep sink...in fact I wanted the old style sink. Like that could happen...do you have any idea of how many styles of sinks are out there? I even went to a junk yard in hopes of finding the original style sink in good condition. No luck.

I wanted plain white tiles with black tile trim. Most people told us to get granite. No way Jose...I wanted the tradition 1950's style bathroom tile.

We wanted a taller than usual vanity.

I spent hours pouring over the Retro renovation website. I studies toilet styles...the 1950's toilets have round bowls...the 1960s and newer have elongated bowls. Our narrow '50's style bathroom would have been crowded with an elongated bowl. I studied sink styles...visited original 1950's bathrooms and took another look at some of the bathroom pictures I had taken while looking at houses last fall.

Some of the bathrooms that I had laughed at when I visited them earlier became mental pin up pictures of inspiration and guidance for me later. I yearned to sneak off with some of those crazy colored bath fixtures!

Well...here's what we finally did: 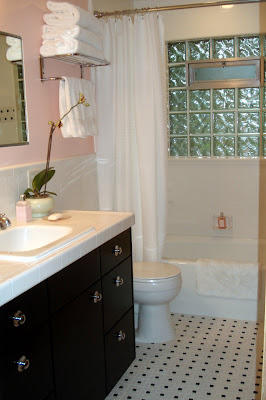 The hotel style towel rack took some research to find. We wound up buying from an on-line resource, and also buying our other racks and the metal dishes to go 50's style behind our drawer knobs. No worriers about scratching the painted cabinet work with that simple yet mostly forgotten option. (We were tempted to go with the Atomic Age four pointed starburst plate backs, but talked outselves out of it in the end.)

Facing the vanity on the other wall is a large floor to ceiling double doored cabinet. I've got plenty of storage space in here...actually more than was in my living room sized bathroom in Houston! 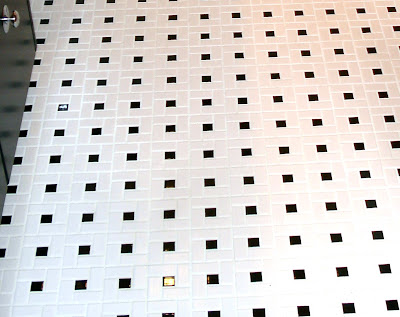 The white and black floor is actually slightly beige... 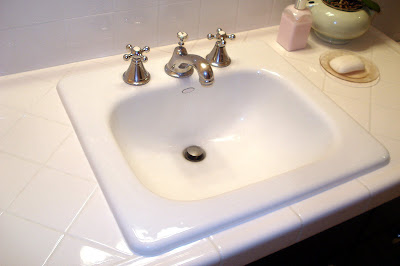 The sink is deep! I wanted the smoothest curve and the deepest I could get, and the thinnest rise at the rim. It is surprising how many people love our sink. Easy to clean...I was tempted to get a cute square sink with several layers of rise in the rim...but then remembered each layer and each angle is one more feature to clean.

(The soap is on a Depression glass plate...the orchid is one that B. has nurtured, and my mom made the pot it is in...) 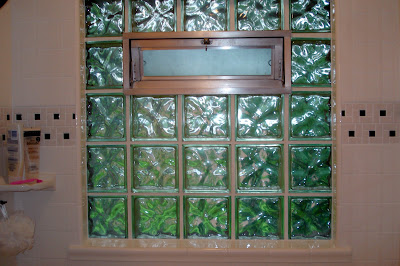 Our contractor suggested using a run of the floor tile on the bathtub walls. Great idea!
He regrouted the window blocks to white, and polished up the "letterbox" window, and made it functional again. I love being able to open that window that is modestly situated at head height. I can enjoy a garden view while I shower! 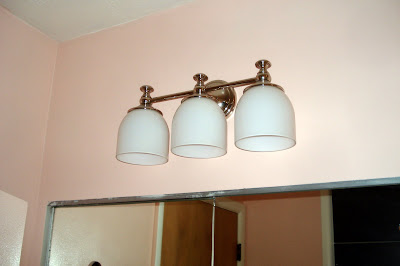 Reusing the lights...not quite '50s style, but we liked them, and we still need to get the medicine cabinet re-framed. We'd like to find a stainless frame...but might need to just frame it in black.
I'm using some of my pink depression glass for holding soap and a candle and such. Both B. and I really, really are happy with how this bathroom turned out.
(And yes...he has NO problem with having a pink bathroom. In fact he has reassured me that he likes it pink. Real men aren't afraid of pink! Especially if it make their women feel feminine and happy.)
Posted by Thoughts on Life and Millinery. at 7:24 AM

Very nice! It looks like a bathroom in an older luxury hotel! I really like the floor...the sink...the towel rack...

I can hardly wait till mine is finished...

It's gorgeous. I wasn't sure about the black cabinets idea until I saw how great it looks with the floor, and with everything else too. Saving that window was genius - it really is fabulous.

I just love it~

The Save the Pink Bathrooms site made me laugh. We once bought a house with a pink and black bathroom and we loved it. We renovated everything else but kept that bathroom. I love what you've done with your bathroom - very serene looking.

OH Jill, you guys did a wonderfu job of the bathroom. I love it. . .I was sad too to hear the old one was going. . .but I am easily bought. . and now I love this one. The rack for towels is such a great idea. .I wish I had room in my bathrooms for one of those. .
You are just an inspiration and I hope that when others are looking to renovate a true 50's house they'll find your blog with all the info and history included for their projects.