At last...the After Shots

I know I have been promising my "before and after" shots of our house.
Well, here we go!
Our house "before" 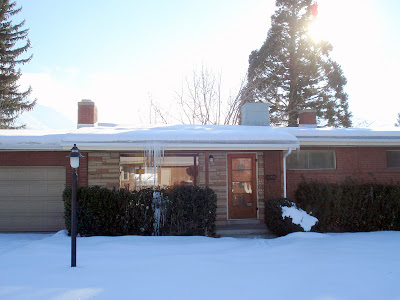 As it appeared the day we took ownership. The hedges were blocking our view from the living room! 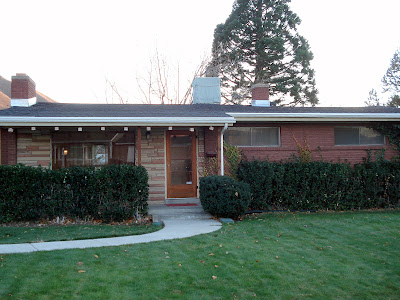 The house as it was when we first met in October. The owners had strings of lanterns along the typical wide eaves. Hip indeed! 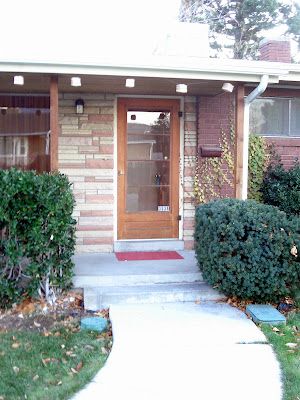 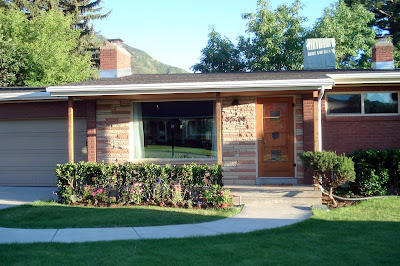 AFTER: A little better...the steps are now cleared., the hippie lights are gone, a new porch light and address numbers have been added.

The old metal framed windows have been replaced with energy efficient double paned glass, vinyl and new screens. We can actually open and close them easily!

The green tarped swamp cooler should be gone by next weekend. 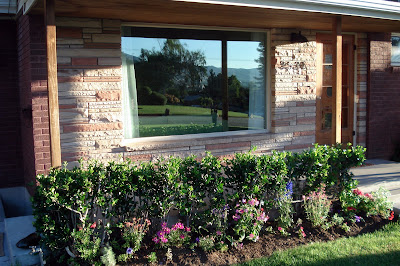 There are fragrant flowers are planted in front of the hedge that we now can see over from the living room. The combed redwood beneath the overhang has been scrubbed clear of vines and oiled. 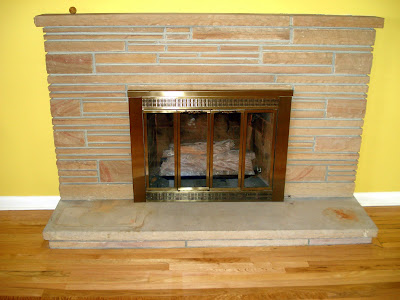 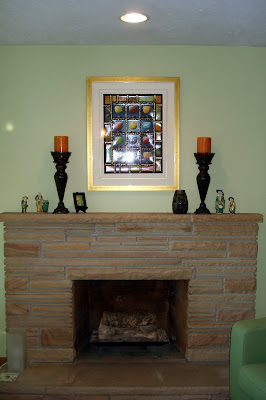 And after. We added the spot light, and changed the paint colors, and ditched the glass doors as it is a gas fireplace. After much discussion, the opinion was not to seal the flagstone to look wet, but rather let it remain as is, with the soft dusty natural colors. 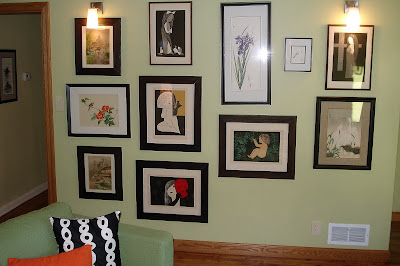 You can see the wide oak floor mouldings we added in this shot. 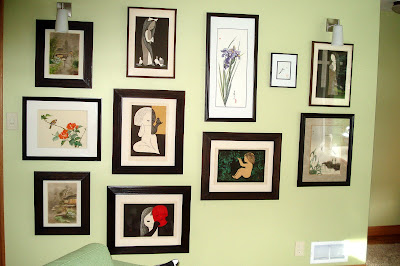 The "salon" style art display facing the fireplace. The prints were mostly from Bernie's grandmother, I framed more of them and used them because they were both modern and colorful. 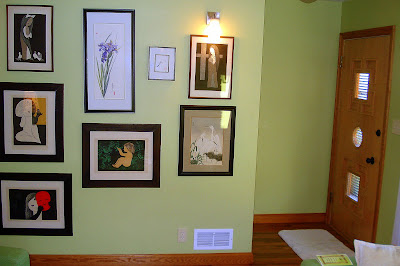 By way of reference, the front door faces a small coat closet as you come in. 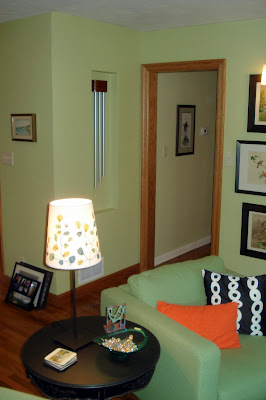 The hallway past the door chimes leads to the bedrooms and bath, and also a sliding door into the kitchen. 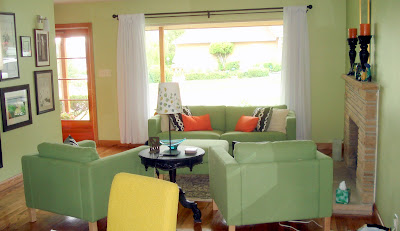 Looking back through the living room from the dining area. It took many tries to figure out what kind of drapery to put up colorwise...now we want pinch pleats that we can draw with a pull instead of pushing the drapery open and close by hand. The is a secondary layer of white sheers behind the white drapes.

The golden yellow square at the bottom of the picture is a dining room chair back... 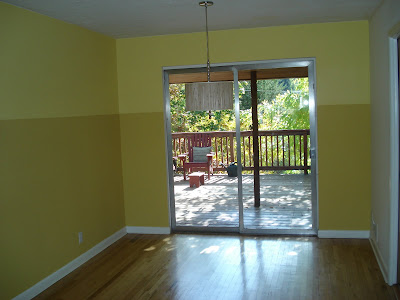 The dining room before.

Notice the white floor mouldings, and metal frame on the sliding glass door. 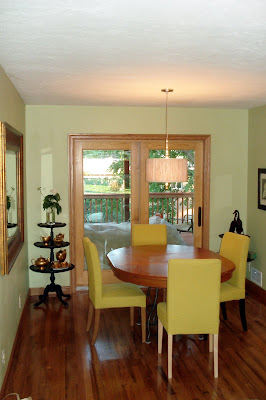 Now a wooden framed slider, and the floors have been redone throughout. The new dining chairs have different colored legs right now...I'll be painting them all black eventually.

The tiered tables used to be mahogany, I sanded them and also painted them black. The large mirror on the wall used to be above our fireplace in Houston.

We have kept the light fixture for now. 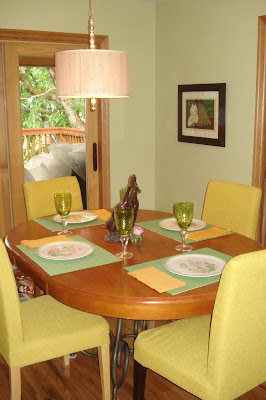 The facing wall has more of Grandma's Japanese prints, and you can just see the moulding around the second pocket door into the kitchen. I must admit, I do like the option of drawing a door closed on the kitchen mess when dining more formally than in the kitchen. 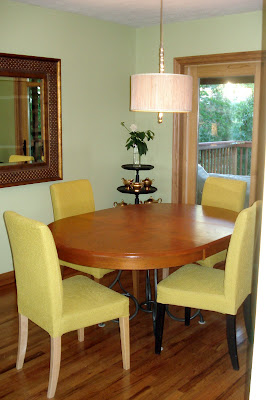 The view is nice to the deck and trees. I've now got six chairs, and am ready for a seated dinner party instead of a crowd of 35 milling about with plates in hand!

What won't be seen will be where most of the remodeling money went: plumbing and electrical. We now have air conditioning, vented through the floor vents that served for heat for more than half a century.

As you may recall, hot air rises, cold air sinks. Let's just say that at least my feet are cool upstairs. Downstairs the temperature is really nice and cool!

I found myself reluctant to share my "before and afters" because 1. I still see things I want to do, 2. Some decoration is at "good enough for now" level, as I ran out of steam and interest, and 3. The house in Houston was so glam and elegant while this house is so much more low keyed that it seems odd to even show what it looks like.

Just plain living here....nothing fancy. We find that we living mostly in the living room, kitchen, Master bath and Bedroom and Deck. The guest room we don't use at all, and the former second bedroom has been turned into a library-wine retreat...Bernie and Tiggie hang out in there a lot!

Downstairs..it looks great! I just never seem to get down there much except to do the dratted laundry. I'd rather be hanging out outside!

Tomorrow (Friday July 3rd) I'll post about the bigger changes in the house: the Kitchen, and the Bath!

I hope you'll drop by to see them!

Posted by Thoughts on Life and Millinery. at 1:35 PM

I really like the color on your walls...that is so soothing. I think the new woodwork and doors and windows look so nice. We have lived in "big and fancy" and we were ready for "plain and simple." I'm liking our simple little home more all the time. I'll love it when the bathroom is finished!

I'm looking forward to tomorrow...for both of us! ;)

WOW...what a change in color and style from your large Texas home! Your excellent decorating touch was and is perfect for each house. It sounds like you, B. and the cats are enjoying everything about your new home including the garden and mountain views. I am so happy for you and can't wait to see it all when we come to visit. Much love, Mom

It all looks very charming, Jill. I do like the color combos you came up with. I caught a glimpse of your new kitchen in your party post...it looks fantastic. Wish I had one that pretty!

I love this home Jill. . .it is so you. You did an awesome job of decorating the parts I've seen today. What a clean uncluttered look. .that oozes. . .come hang out.
Thank you. . very nice.