Kitchen and Sun room: Before and After

After my earlier rant today (see previous post) about stagers, I feel obligated to let my family know what the house looks like now. So here we go.... 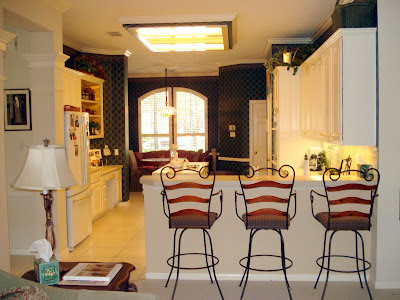 Kitchen before, with the wall paper that I was so-so on, but that I kept for eight years... 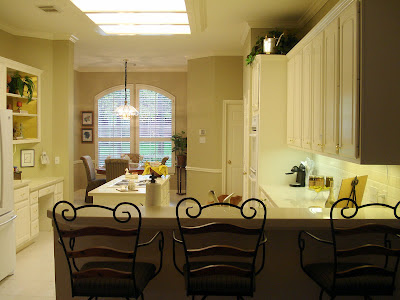 Breakfast nook...table for two and couch. Currier and Ives hunting prints on the wall.

(I've had that couch for over 20 years...I must blog about that couch!) 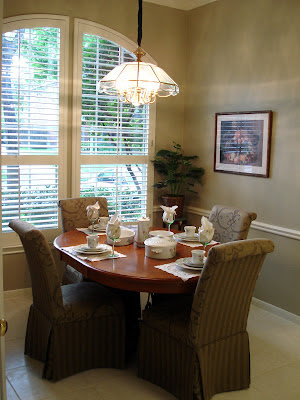 Breakfast room staged. Table has leaf, the two chair that were in our bedroom bay window are now in the kitchen, the couch is gone, and the picture that used to be above B.'s dresser is now on the wall.
Dishes are my Herbs and Spice set, the china set I selected at age 16 and that B. never liked.
Goblets belong to the stager, as do the napkins and secondary pattern plates. 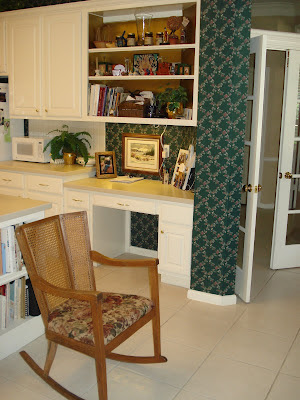 Kitchen desk area, cook book shelf, rocking chair.
I didn't have a chance to re-do the open shelving area; it has always been objectionable to me as it is a dust collector in the kitchen.
Noticed the canning jars on the top shelf?
They were later staged on the other counter top. 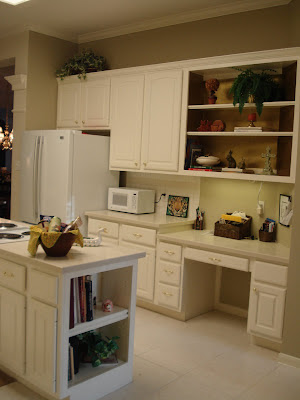 Desk after. Notice the needle point tiger is now on the counter for "a pop of color." The needlepoint celebrated Jeff's love of tigers as a child, and the mascot of the children's Christian elementary school.

No, I would really rather NOT have that sitting on the kitchen counter....

Notice the staging with my wooden salad bowl. It was the one I used to block a hat upon once...

The bright yellow napkin is another color "pop." 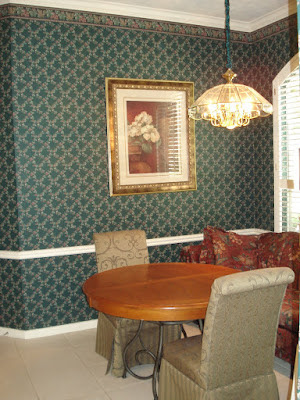 Wall with a big picture, the picture has now been moved by the stager to near the door to our bedroom. 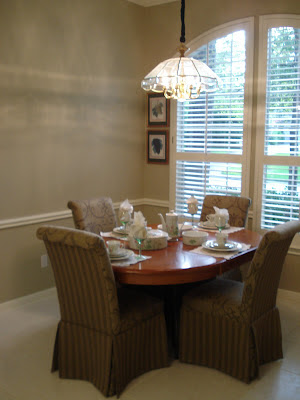 Two small pictures instead of one large. They belong to the stager.

I have to admit I really like how this space looks now. While it was nice to lounge on the couch with a cup of tea, the area seems a lot airier now. Lord knows we don't need any "warm and cozy" spaces in hot old Houston! 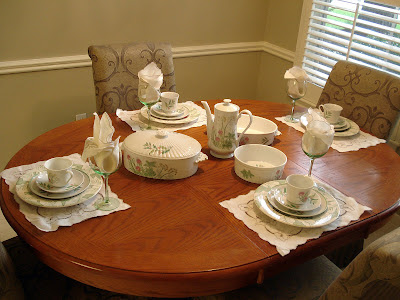 Close up of the table top which will need to stay in place until at least after the virtual tour is filmed.
(Don't you set YOUR table like this in the kitchen EVERY day...all day long???)
I liked what I had before, I really like what it is like now, for now.
Now that I understand the process that allows you to paint over wall paper, I think I will be much more comfortable buying a home with funky wall paper if needed. 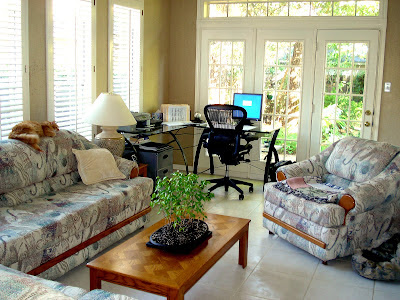 Sun room, before.
Bernie was using it as his office. For the first seven years we didn't have his desk there, and we had a TV where the chair was. 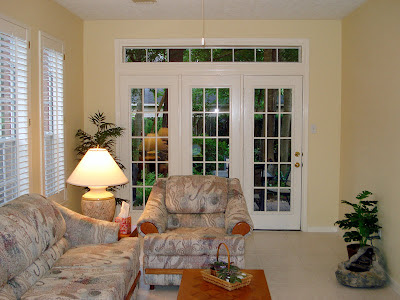 Sun room after paint. Layout similar to how it originally was. 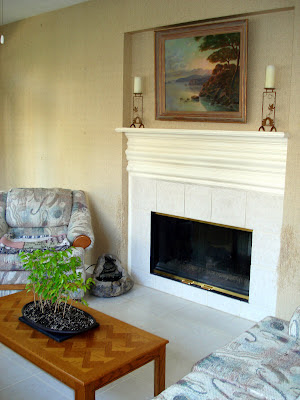 Bernie's bonsai forest on the table is nice.... 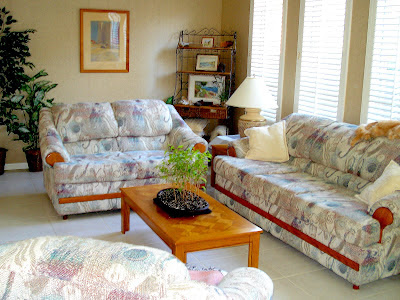 Before. Little change really except the chair position and the second plant by the door.
(I think Tiggie is still in the same place now too.....)
I really like the sunny yellow paint, especially in the morning as the sun comes in through the trees and through the french doors.
The grass cloth was nice, and it was one of the reasons why I bought the house originally, but eight years later, I prefer the paint. I think I have just moved on from neutral/natural/bland colors.
Posted by Thoughts on Life and Millinery. at 7:02 PM

I didn't get to read this post and the previous one until this morning...and I did read the rant about the stagers first. I was initially going to defend short people (I'm barely 5'1") but I won't - I've learned to adapt. Doc is tallish at 6'), so we've learned to compromise over the years. However, the one thing that I have always complained about (and rightly so, I believe) is the placement of peep-holes in doors. I have never been able to tip-toe tall enough to see out one, so what good does it do me? I keep a step stool in the kitchen; should I drag it with me to the front door? And hotel rooms always place them so high that I can't see anything - it would be so much simpler to place them lower (think of a youngster who might be in the room alone for a bit) and have tall/average people stoop to look out. Anyway, I really shouldn't rant on your blog...but thanks for allowing me to!! (Silly, huh?)

I like the look of your newly staged and painted rooms. I've often thought of becoming a stager; it just interests me. I used to help friends with staging their homes and selecting paint, carpet, etc., but for the life of me, I cannot make those decisions in my own home! Weird, huh?

Having someone come into your home to redecorate while you were out would be very unnerving, too, but in the end, that is probably for the best. I'd be right there in the way protesting every little change.

Vicki is absolutely right: Peep holes should be low in the door, especially for kid safety.
Here here! Good observation!

Jill, I really do think that the house looks very fresh, clean and very easy to move into. The only thing that I found really odd was the two little pictures scrunched into the wall with the window. The large wall is where I would have put the picture. . but what do I know, they must know their stuff.
Praying it sells quickly.

I like the new colors. They look so bright. Hope everything is getting under control. Moving is bad enough without all the rest of what you and B. have been dealing with. Just take it one step at a time. This too will pass. Thinking of you both. But I do hope our men get pass this falling phase soon. Love Mom S.

Wow. What a difference. Nice.

It looks very light and spacious.

I agree with Lovella on the pictures but then, I'm not a stager.

Hope it sells soon for you - I'm sure it will as it looks so lovely.

Thank you, that was extremely valuable and interesting...I will be back again to read more on this topic.

Sweet site, I hadn't come across jillthinksdifferent.blogspot.com earlier in my searches!
Carry on the fantastic work!

Thanks for sharing the link, but unfortunately it seems to be offline... Does anybody have a mirror or another source? Please answer to my post if you do!

Thanks for sharing the link, but unfortunately it seems to be offline... Does anybody have a mirror or another source? Please answer to my post if you do!

An Ultra Higher Efficiency search that tends to make the Solo-BaricÂ® [url=http://ghromelia.typepad.com/blog/2010/09/grundig-shortwave-airwaves.html]L7[/url] genuinely a statement item. The cone offers you deeper and stronger bass at greater listening levels with less distortion due to a smaller amount tendency to flex. Simply because, when a woofer cone flexes, there is a reduction of output. This decline of output translates into much less bass.

Thanks for sharing this link, but unfortunately it seems to be offline... Does anybody have a mirror or another source? Please answer to my post if you do!