Yesterday a group of Oregon State Alumni met in a local sports bar right here in Houston to cheer on our beloved Beavers in their yearly scrimmage against the University of Oregon Ducks. 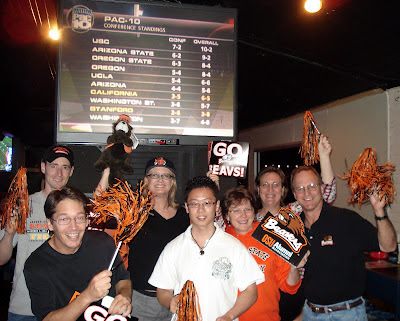 I had never met any of these fellow Beavers before, but the lady in orange graduated a year after me, and the guy in black next to her was in my 1976 graduating class.

We laughed at our excitement; when we were at OSU watching the games in person, Dee Andros was the couch, and he was about the most exciting thing about the whole team, as Andros was as wide as he was tall and went by the name of "The Great Pumpkin,"
Dressed head to toe in orange, coaching from the sidelines, it was an apt moniker.

The team, however, was terrible back then.
I remember playing bridge with my dorm mates to pass the time in the stands.
That's bad. Real bad.

So of course now we are ABSOLUTELY making up for the lost years by enjoying every second of our Fighting Beaver's games. 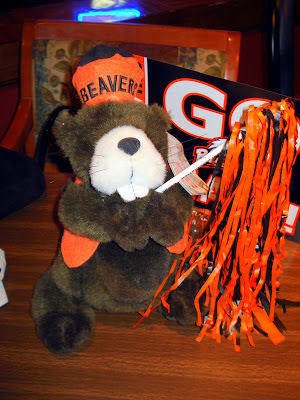 I even took my Benny Beaver stuffed animal along to this game, cuz he plays the OSU fight song whenever you squeeze his paw.
The OSU alumni association gave us the Orange and Black school color spirit sticks to wave. 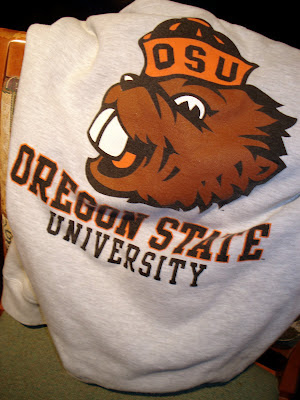 It was too hot here to wear my OSU sweatshirt, so I made do with wearing my Benny Beaver earrings and baseball cap. 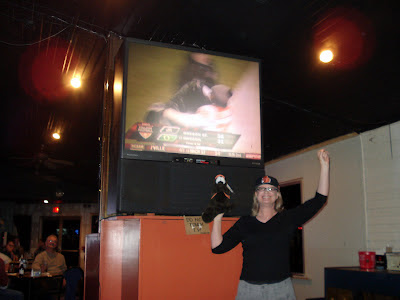 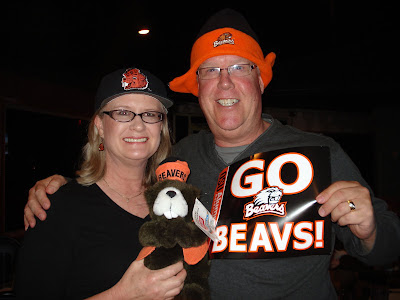 Beaver by marriage Bernie even wore his OSU ski cap to celebrate the victory. 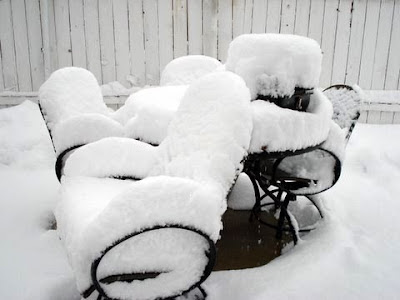 In other news...Laura and Jeff lived through this in Salt Lake City. Some snow, huh? 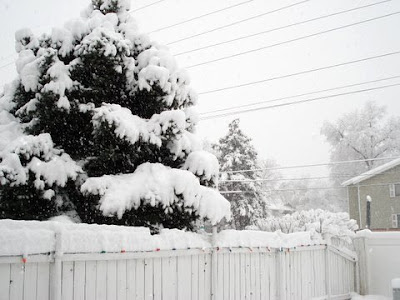 The ski slopes have been opened, Jeff has made his first run. Bernie is glued to the ski resort webcams, and counting the days until he gets to start skiing too. 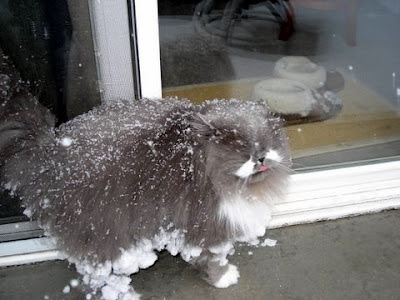 My grandcat Meowsie is not quite so thrilled.
I think he is sticking his tongue out at Jeff for putting him outside in the snow.
Can't say as I blame him....
Let me just say it one more time:
PLUCK AND STUFF THE SILLY DUCKS>>>
OREGON STATE HAS WON!
(And my grad school, Texas Woman's University is STILL undefeated for yet another year!)
Posted by Thoughts on Life and Millinery. at 8:59 PM

Oh Jill....the picture of that cat. My son and I were sitting here laughing until we had tears in our eyes. The little boy is sick and in his case, he was laughing to the point where he had a Smoker's Cough. Good times. A much needed laugh.

Yay for the Beavers!

Hi Jill, I have been a Beavers fan for years !!!
Oh, wait... I think mine all had four legs and a flat tail!

Your kids' snow pictures look like they were taken at our house!! We had a good 6-8 inches today, I think.. very pretty but caused a power outage.
Meowsie doesn't look very thrilled.. maybe out of her element somewhat?

Congratulations on your team winning... I can see it made your day !!! smile

GO BEAVERS! wonder why the story didnt make the Houston paper? Sitting here in the desert, it is hard to picture snow everywhere. The PHX natives ran to the hills this weekend because they had snow. Wonder what Heber looks like in the snow? BTW, did you know Heber has a new name? Heber-Overguard...wonder why? Love B

Poor Meowsie. I love that picture!!!