The other species of neighbors

I hate to admit it, but I don't know very many of my neighbors.
Around here people come and go in and out of their garages, rarely are they seen outside for any reason.
Some days I wonder if any humans live on our street at all.

Now the neighborhood cats are an entirely different story.
As I mentioned before, they feel free to drop by any time and are usually available for friendly conversations on the front lawn or driveway.

On Thanksgiving Day, while all the humans were nowhere to be seen, Giovanni was lounging around on a freshly washed black car, clearly belonging to some guest who was busy eating turkey, and unaware of the feline situation outside on his car. 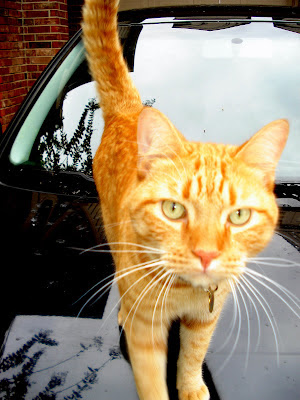 I told Giovanni that I knew a guy up in Canada who would be pretty steamed to see a cat walking around on a freshly washed car.
"Well he's not here, now is he?" G. replied, standing up to make his point. "Sounds like some one who is bigoted against cats to me. He probably has dogs, right?"

I had to admit that Giovanni had the guy pegged. 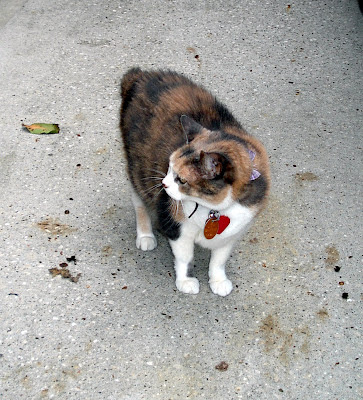 Giovanni's co-cat was available for conversation as well.
Her name is Donut.
Says so right there on her pretty red name tag.
And she is the sweetest little tailless calico that you have ever seen.
She's quite stylish too...gotta love that tiny purple gingham bow on the side of her collar. 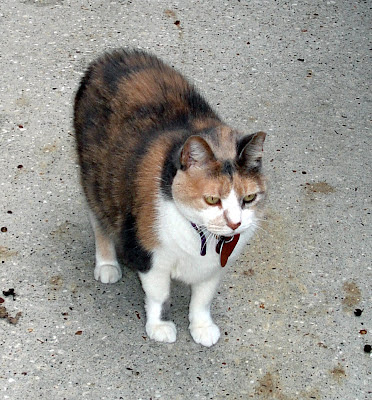 Donut let me give her a few pats and hugs. She did a little bunny hop, and rolled around on the pavement. It is good to be able to relax like that with friends, don't you think? 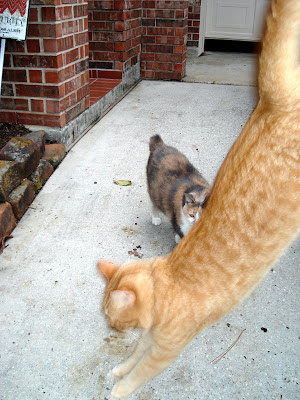 Donut loved having her picture taken, but G. decided enough was enough. He decided to show off with a stunning action shot, leaping down from the car and sticking his landing as a perfect 10.

(Giovanni and Donut. How ever do they come up with these names?)
Posted by Thoughts on Life and Millinery. at 9:19 AM

Fantastic action shot Jill. Send that one into the paper.
Boy, do you ever have the guy in Canada pegged. I was immediately wincing when I saw the pretty cat on the black car and then laughing when I saw your journalistic report . .
It would appear that Donut has had a few donuts in her day.

I'll second what Lovella said (the action shot and Donut's eating habits). That's a cute narrative about your furry neighbors. We have quite a few of their relatives living around us, too, and some are especially welcome to come visit anytime. (Others need to take their business elsewhere.)