Fun is needing a recent picture of your dad, so you go to Google Images, type in his name in quotes, and ta-da! There he is, looking handsome as ever. 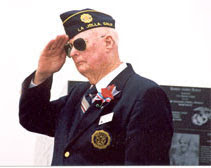 My dad's name shows up a lot in a Google search, because he is and always has been very active in his community: Boy Scout leader, Sunday School teacher, speaker, or on the board of what seems like countless organizations, or being interviewed in the local paper. Lots of interviews. Some times he shows up in public venues just for clowning around.

One year when I was living in San Jose I was listening to a talk show out of LA on the radio. The show was covering a crazy demonstration in La Jolla, my home town. A fancy gourmet club met there monthly to sample unusual dishes; on that particular day there was Lion Steak on the menu. (Farm raised lion...lions breed rapidly.)

The word got out and people were picketing the restaurant, outraged that lion meat and meat from other game animals were being served. The radio show was making fun of the picketer, and commented that among the signs was one sign that read

I knew, clear up in San Jose, that it was my dad holding that sign. Sure enough, as soon as he had heard about the ridiculous protest, he had hoped on his Honda motorcycle with his own sign and joined right in with the mob. It took awhile for the mob to realize what his sign said...but the radio hosts were cracking up.

My dad...the original "Thinks Different" guy. Whether he was being pulled to pieces by his older twin sisters, or living in an orphanage, heading off to boot camp (Navy boot camp...San Diego boy got sent to IDAHO!), and then to WWII, marrying the prettiest girl at San Diego State, raising two kids, running his own business, fishing, hunting, gardening...he has always been a busy man.

He tells me he is proud that I'm his daughter. 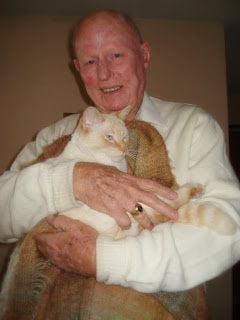 (Actually, he is absolutely crazy about cats and would never eat one. Not even in a gourmet dish. That's HIS cat, Rufus with him in the picture above. Rufus is my sibling cat.)

Posted by Thoughts on Life and Millinery. at 2:34 PM

Jill, I can see that you have much to be proud of in your Father. I can also see now where you get your spunk and fun personality mixed with intellect.

I'd also like to send up a Happy Father's Day to Bernie. Well done. Enjoy your day.

I see you take after your Dad, in all the good ways! Oh, I see Lovella agrees with me! Must be confirmation! I hope that he, along with the other man in your life, has a wonderful day!

OH JILL!!! I was getting histeric here thinking your Dad had actually eaten cat! I love cats!!! But you know? I HAVE eaten dog before! It tastes like VERY LEAN white chicken meat. And you Dad sounds like a very neat man!

(Jill I replied your comment on my blog, just under yours.)

Gotta love it! Great pics and fabulous editorial. I wish he'd have a blog too. Maybe it would be titled "How's your liver?" or "wanna marry my granddaughter?"
Probably he'd call it "I love Rufus best!"

I agree with the above!! You are obviously very like your Dad. And should be proud of it!