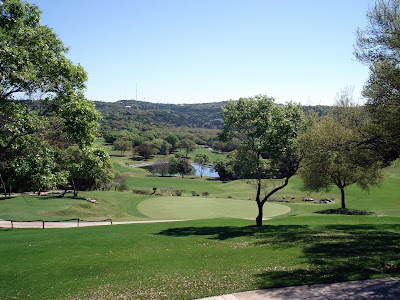 Bernie was invited to attend a conference with one of his customers that was held at Barton Creek Resort in Austin TX.

Lucky me, I got to tag along. Bernie and the men played golf on the course above (and Bernie won) while I flaked out around the pool and read up on Switzerland, sketching ideas of what I'd like to do when we visit there in May. 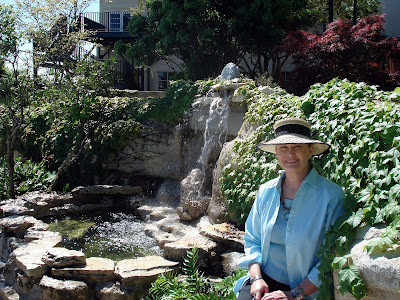 Bernie took a quick picture of me before he headed out. 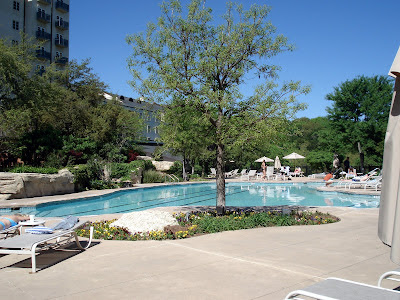 I got into my swim suit and got comfortable under an umbrella. The mockingbirds were singing beautifully, the waterfall sounds were refreshing, and the whole place was just perfect.

Then a woman sat down in the next chaise lounge and popped open her cell phone.

About the time she ran out of people to call and tell that she would call them later (?) two other women came and sat on the other side of me. They both wore elbow length tee shirts, light weight vests and knee length pants. I'd say they were in their early to mid 40's.

Since it was around 80+ degrees, I didn't quite get the vests, but hey, what ever, they looked nice. Apparently they were friends and were going to be chatting together, catching up.

I was busily reading in my book about Swiss cheeses and Swiss chocolate, so I tried not to eavesdrop.

But it was no use.

I only wish I could have had my watch with me to time how long these friends managed to chatter about their hair.

"I got the clip with the five comb things, I first thought five would be enough but I had to go get the one with seven prongs to hold it"

"The seven prong works! I don't think the five prong would do it"

"I know, that's why I went and got the seven prong one"

"I'm trying to wear it a little fuller now, I can almost pull it up, but mostly I'm just wearing it fuller"

"Now that I have some blond highlights...I thought I'd let them grown out, but I might have them put in again" etc. etc. etc......

They finally left after about 45 minutes. The topic never changed. 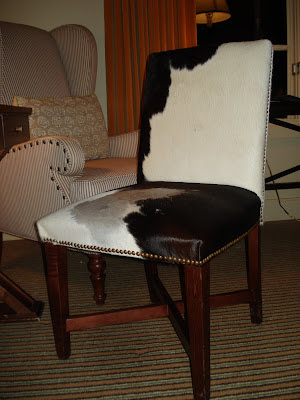 I headed back to our room. This cowhide (with fur) covered chair was a hoot. The room was Texas elegant. I loved it, and wished my camera battery hadn't died. 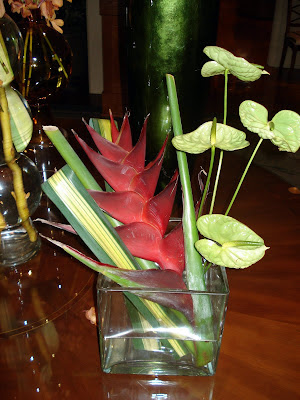 The arrangement above was one of several on a table in a room off the lobby. It appealed to me, and made me think of Laura, who worked as a florist as she went through college.

A glass floral frog held the green flowers in place. And I like the square shape of the vase.

You can see more of Barton Creek from their website photos. Tomorrow I'll post what I had for dinner there.

Posted by Thoughts on Life and Millinery. at 11:11 PM

How could you not eavesdrop? What a hoot.

Did you see anything in your Swiss book about Swiss Meringue? So many wonderful swiss things, and yet how could you not eavesdrop?

I'd forgotten about Laura's florist days! Will have to snap pix of some of the St. Gallen floral arrangements outside the stores. Florists are BIG here! They are getting ready for the big Easter Egg Hunt Sunday morning from 8 - 10 am. They promise 1,000 Ostereier hidden in the Old Town. Should be fun to watch from our roof if the weather is nice!
K Q:-)

I completely understand the dinner now! :) I guess I should read your blog in chronological order when I am trying to catch up for missed days! I'm back at work and a bit overwhelmed! I am sorely missing the luxury of reading blogs at will! The resort looks wonderful! One year, Ray had to go to San Antonio for a conference and I tagged along. It was heaven to lounge about the pool but I agree, when you finally have a bit of peace, and the opportunity to read, you crave the serenity of silent air. What is with the cell phone on vacation!? (not really a big cell phone user, and find most who use them raise their voice a few decibles too high!). Enjoy your stay!