It is a pity Picasa will only allow four pictures per post, and that I am too lazy to upload pictures one by one to make one long post.

I am just going to have to make do by posting over and over again, four pictures at a time, until I have posted all of the bluebonnets shots that I took on the road home from Austin last Monday afternoon. 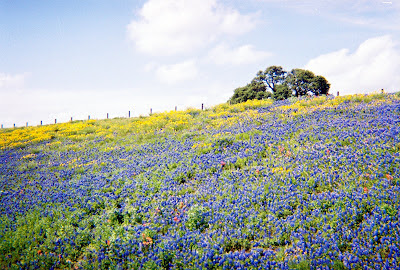 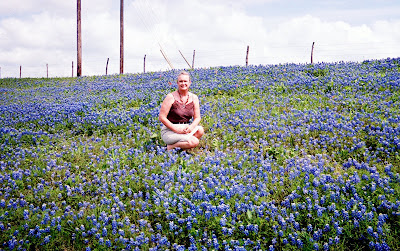 I took pictures of an elderly couple who pulled up behind us at this patch, and them asked him to take a picture of me. I usually *try* to have a white and blue and pink outfit on (with sleeves) or a dress, and certainly A HAT (specifically my bluebonnet hat...) but the older man was there and Bernie was doing his usual thing (answering phone calls) so this is going to have to do for this year's picture. 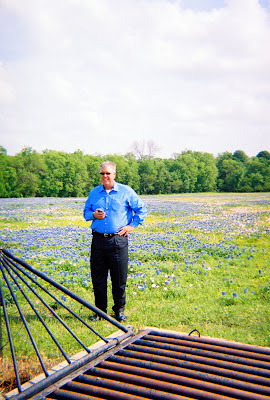 I did manage to catch Bernie between calls, he climbed out of the car, his phone permanently attached to his hand, and of course it rang as I was getting him into a great location. Once he's in a conversation, he's a little hard to steer, but I think it turned out alright. Since he is also allergic to bee stings, I try not to have him linger in flowery meadows any longer than absolutely necessary!

Enjoy coming along with us and enjoy traveling a Texas Bluebonnet Trail: Austin to Houston, April 2nd, 2007.
(And make plans for visiting us to see the bluebonnets next year! It is an experience you won't want to miss.)
Posted by Thoughts on Life and Millinery. at 2:49 PM

Pouring over the lovely fields of bluebonnet pictures, I realized I have never in my life seen so many blue flowers all in one place that were only there by God's design. Amazing! Now I know what the fuss is about Texas! Here, I thought it was a dust bowl sprinkled with cattle and oil wells. They are much tinnier (how in the world do you spell that?) than the lupins up north. Beautiful bluebonnets! (and I thought you just liked them for their name - you hat lover, you!)

Hrrrumph! You and your beautiful bluebonnets...and me and my foot of fresh snow.
I really am happy for you, Jill! Just wish the spring weather with the blooms would return and stick around.
!!
Wonderful photos, BTW.