Top o' the Morning to you! 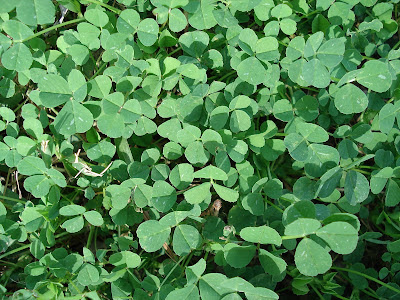 Are you wearing green?
I remember when I was a kid that the custom was that if you weren't wearing a bit of green on St. Patrick's Day, you were fair game for receiving a pinch from anyone who noticed the fact.

In these litigious time, a giving someone a pinch is enough to get you convicted of an assault charge.
Better re-think that one.

I used to get up early on St. Patrick's Day, and go outside on the dewy lawn, hunting four leaf clovers.
I would gather as many as I could, (my father's unusual dichondra lawn always seeming to have several robust patches of four leaf producing clovers for my pleasure) and placing my bounty into a tiny bottle, I would head off to school.

There I would offer clovers to my friends, and to anyone who had neglected to wear a bit of green.
If I had managed to pinch any one, I probably would have been slugged back.
It wasn't worth the risk.

Of course some of my classmates slyly let it be known that they were wearing green underwear.
A hint of a waist band was usually pulled out to prove that their claim was true.
Green socks were also popular. Anything where the green wasn't apparent that might cause a wrongfully delivered pinch that could be repaid with, what was it, ten pinches?

Or a wallop, if no teacher was looking.

As an adult I routinely cooked a meal of corned beef and cabbage on St. Patrick's Day, a delicious treat that my mom always made in a pressure cooker (the beef part, not the cabbage.)
None of my fellow wives bothered, informing me that they didn't like tough meat.
It wasn't until I began inviting people over to enjoy the traditional holiday meal that I discovered most people boil their corned beef, and indeed, that usually produces a tough slab of salty meat.

Pressure cookers, I have two in order to cook enough corned beef for a crowd.
Most people do not own even one!

The potato leek mix called colcannon was a part of the meal , with a small coin mixed in to be found by one lucky guest.

The night before I would make shamrock cookies, and Irish soda bread with fat raisins and a cross cut on the top.
I'd get out all our Chieftain albums, and the video tapes of "Darby O'Gill and the Little People", "The Quiet Man" and later the video of the Irish dancers in "Riverdance."

Brewing up a large pot of Irish Breakfast tea for breakfast, (and planning Irish Coffee for later), we'd open St. Patrick's Day cards, and look forward to an after school party.

If the day fell on a Saturday, we'd invite everyone over for tea and a plate of Irish food.

Now I know that in Ireland proper the day is lightly celebrated. A trip to church for mass, and that's about it my Irish born friends inform me. They scorn the green beer, green garb, green rivers and lunacy that America has engendered to their simple St. Patrick's Day.

And corned beef?
More likely would be Irish stew, or fish on the supper plate.

Today daughter Laura will be wearing outrageous green eyeshadow, a "Kiss me I'm Irish" teeshirt, and having a blast with her friends in San Diego.
Bernie, Jeff and I are headed to the famous pancake/waffle house that is locally owned here in Salt Lake.
Wonder if they'll serve green pancakes?

Then we plan to visit Red Butte Garden to see what is blooming, and look for a lamp shade for a lamp that came with the house.
A lamp that Jeff would never have purchased, not once in a million years.
But hey, the price was right (free!) and it looks great in the guest room, so I get to pick out a shade.

Luck of the Irish you know.

So tell the truth...
Are you wearing green today?
If so, please leave a comment and let me know.
If you're not, well, I promise not to give you a pinch.
Just type something in green on your blog and we'll call it close enough!
And in case you are wondering,
you "pinch" a blog by commenting
like this:
>>>>>PINCH<<<<
(Have fun with that!)
Oh, and here's a tip:
For a romantic St. Patick's day evening, rent the Pierce Brosnan movie "Laws of Attraction."
It is filmed in Ireland, and is a "put a big smile on your face" romantic comedy.
A perfect way to put a jig in your heart towards romance.
(Oh, and look!
Here's your lucky clover!)

Posted by Thoughts on Life and Millinery. at 8:11 AM

Sure and I am wearing the green - blouse, earrings and necklace. However, we're going out for Japanese Tepanyaki tonight. That Irish Soda Bread sounds yummy tho' and I have a great recipe. Will whip some up if I can find the buttermilk (Saurmilch) here. Better skeedaddle as the stores are closed here on Sunday.

Phew!! glad I saved myself from your pinch by my shamrock photo!!

Did I miss something? Did Hannah perish at the hands of the Indians?
I found your story fascinating.
How blessed we are today in so many ways we take for granted!
Happy St. Patrick's Day!!

'Even your toes! Fun! Enjoy your weekend!

I read only the first few lines of your post and quickly ran to put on the new green shirt that I purchased in honour of St. Patrick. Phew, that was a close one.
Perhaps, the movie will be sought out for this evenings enjoyment, thanks for the hint.
How fun to hear how you my Irish friend has enjoyed celebrating this day, and Of course . . ."top of the morning to you . . too."
Send a picture of the pancakes, and if Laura sends you a picture, pass that on as well.

Oh! Thank you for the four leaf clover :o)
And for reminding me about the pinching!

Happy St. Patrick's Day to you!

Amazingly, I am wearing my favourit green sweater! At 7:00a.m., I dressed and grabed it because it is offically my first day of Spring Break, and I am out to celebrate Spring. Glad I threw it on avoiding all those pinches! A whole party, and tradition I have been oblivious to! Thanks for casting a new view on St. Patrick's Day ~ the things one can learn by reading your blog is wonderful! Thanks!

Why does this NOT surprize me??? It's all about the green...down to the TOES!

Thanks for showing me your toes and for the clover...needed it on this green day as I only have a bit of green, oh but you saw that...aw I was trying so hard to hide the fact that I too have some Irish in me...somewhere.