Chapter 4: Back to Millinery

"But Jill," I hear you complain, "I don't care about boring old wars that took place hundreds of years ago. I'm only interested in hats!"

Well, of course you are!

And so were they. Back three hundred years ago a huge fashion fad was sweeping both Europe and the New World: Beaver Hats.

(The above style was favored by the Cavaliers, or Royalists, who were pro King Charles and anti Oliver Cromwell. My husband's ancestor was a Cavalier, and his portrait included a similar hat.)

Now these hats were required for appearing in court before the King. And the men looked mighty fine as they swept the huge hats with waving feathers off their heads, and "made a leg" of a bow.

But the Puritans (like my Dustin family) eschewed all that. Plain would do for them. How unseemly to deck yourself out for show instead of garbing yourself modestly and in fear of God.
So they wore hats like this one:

Both men and women Puritans wore that style of hat.

There now. Isn't that more modest?

Of course it is. Which I guess is the reason I was inspired to make this hat awhile ago: 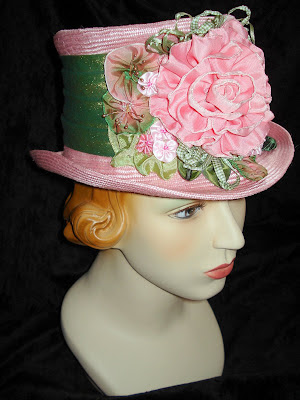 Same style. Modest pink. What can I say...my roots go deep.
I made this hat from straw, even though as an Oregon State University Alumni, I myself am a Beaver. (Don't you just love how all this is coming together???)

Regardless of the style, way back then the hats were all made from beaver pelts. The cavalier's hats took a lot of beaver. And the beaver hats cost in today's dollars around $650 USD. (or 816 Canadian, for the folks up north. Hi ya'll!)

All of the above information was abstracted from this site, which I found absolutely fascinating.

There is a link there that walks you step by step through the process of making a beaver hat, and another that explains the fur trade.

Russia (Hi Lovella!) played a role in all of this, as it was the Russians that developed a secret felting process needed for beaver fur, and created a monopoly on the beaver felting market until the early 1600's.

2. Europe ran out of beavers, and the European Beaver was identical. to the North American beaver.

3. Trapping and trading beaver with the best fur (which happened to be found in the Northern New England and Eastern Canada area) was very profitable.

5. And people were greedy, and so fighting broke out over trapping rights.

So in addition to the Catholic-Protestant issues, the French-English monarchy issues, there was also the Colonist versus Canada versus Native American each wanting the rights to the beaver fur trade.

And all because (sigh. swoon...) there is just nothing like a good looking hat to make you feel great!

Which will bring us to tomorrow's episode in the saga of the Dustin family:

Posted by Thoughts on Life and Millinery. at 9:55 AM

Lust and Cosequences? Sounds like a title more likely used in todays time.
Beavers? We had a few that you could use. We have a short walk to our mailbox where there are a lot of poplar trees. Terry and I are amused at the Beavers logging going on. There isn't much beaver trapping any more.
I'm liking that pink hat. I have a sweater to go with that.