Chapter 9: "Impossible to choose": Thomas and his children

I'm posting twice today, this being March 15th, and the actually 310th anniversary of the events which occurred in Haverhill, Massachusetts to my family on March 15th, 1697.

If you missed reading chapter 8, please scroll down if you wish to read the story in order.
If this is your first visit to my blog, or this story, you can reading the story from the beginning by using the side bar to find the post which was dated March 8th. 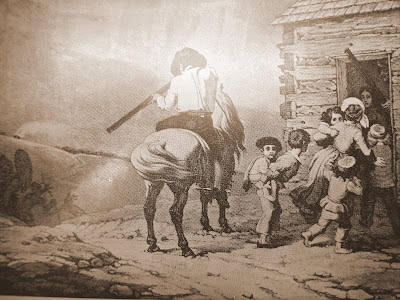 After Thomas left his wife and infant to their fate, he rode quickly to overtake his children who were escaping into the woods.

Thomas told this part of the story himself to a writer of the time, just a few weeks following the incident.

This is what was reported about the event published in 1697:


"Ere she (Hannah) could get up, the fierce Indians were got so near, that, utterly desparing to do her any service, he ran out after his children; resolving that on the horse which he had with him, he would ride away with that which he should in this extremity find his affections to pitch most upon, and leave the rest unto the care of the Divine Providence.


He overtook his children, about forty rod from his door; but then such was the agony of his parental affections, that he found it impossible for him to distinguish anyone of them from the rest; wherefore he took up a courageous resolution to live and die with them all.


A party of Indians came up with him; and now, though they fired at him, and he fired at them, yet he manfully kept at the reer of his little army of unarmed children, while they marched off with the pace of a child of five years old; until, by the singular providence of God, he arrived safe with them all unto a place of safety about a mile or two from his house."


The idea that he was able to get a shot off is questionable. The Dustin/Duston family book says this about the incident:


"Quickly seeing that he was too late, and doubtlessly urged by Hannah, he (Thomas) rode after the children, resolving to escape with at least one. On overtaking them, finding it impossible to choose between them, he resolved, if possible, to save them all.

A few of the Indians pursued the little band of fugitives, firing at them from behind trees and boulders, but Thomas, dismounting and guarding the rear, held back the savages from behind his horse by threatening to shoot whenever one of them exposed himself.

Had he discharged his gun, they would have closed in at once, for reloading took considerable time. He was successful in his attempt, and all reached the garrison safely, the older children hurrying the younger along, probably carrying them at times."

What Thomas meant when he stated that he resolved to save the one his affections "pitched on" is puzzling.

Perhaps he meant that as he rode he realized it was unlikely he would be able to rescue all seven children (presumably the eldest, Hannah, at 19 was not one of them.)

Perhaps he felt he would just grab which ever one he first encountered, or perhaps he secretly did have a favorite. Whatever the case, when he saw their faces, he realized he could not abandon any as readily as he had already abandon his wife and infant.

The mile to the Marsh Garrison must have seemed endless. Reading the book "Blink", I learned that in times of crisis, the heart rate rises, and changes in the human body occur to safeguard against injury. Unnecessary functions shut down, and often tunnel vision occurs, no sound is heard, yet everything seems to happen in slow motion.

As the family rushed into the Marsh garrison house, I wondered what Thomas did with his horse. Garrison houses specifically were built with small narrow doors, which would only allow one person to enter at a time.

Did Thomas jump off his horse, and run into the garrison, or did he discharge his weapon first?
Did the horse gallop away, or was it taken by the Indians?

How did he answer his children's questions concerning the well being of their mother?

And how long did they stay in the dark safety of the place, as other rushed in seeking safety.

How much could they hear of the mayhem that was being unleashed upon the neighbors and friends? Were the men tempted to go out and fight? Or did they wait until they thought the danger had passed before they ventured out from the garrison house again?

Two of my ancestors huddled in that garrison house so long ago: Thomas Dustin, age 45, and his son Nathaniel, age 12.

I wonder what they thought when they most probably read their father's report that he had resolved to save the one whom his affections "pitched upon."

In truth, I like to think it was Nathaniel that he loved the most.

And I am glad that they all were saved.

Next chapter: "When the smoke cleared and the dust settled."

Posted by Thoughts on Life and Millinery. at 4:55 PM

I'm certain it was Nathaniel. Thank you for the second post which I came upon with delight. Rest well tonight for tomorrow is the finale, . . right?

310 years . . what an amazing anniversary. How wonderful that the family has you to revisit and record for us all your rich history.

Wow, what a story! and what a rare privilege to have the story in so much detail!!
I am glad the children are safe..but I am still hoping the mother was somehow saved too...
I think Thomas meant that he would choose a child at the last minute.."pitched upon" doesn't sound premeditated to me....but whichever...I'm glad that he loved all his children!!!!
Can't wait until tomorrow!
Thank-you for sharing your story with us.