Well, Tiggie's back home.
We looked out the window, and there he was, sitting on his "Stump of Consideration", where he always sits when he needs to go about considering something. 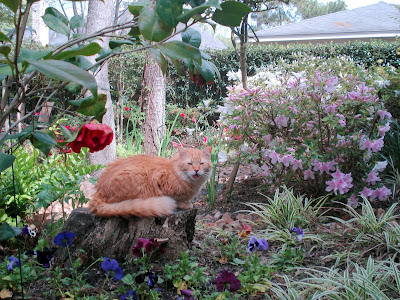 He knew he was in the kitty litter with us, and was talking up a storm even before we got to him.

"That bird THING was all a Fraud! It was just paper, and glitter and buttons and stuff. That Dawn woman must be an absolute lunatic. Why would she want to deceive a good old faithful orange cat, like me, like that? I'd heard about people in New York not being like folks in Texas, but if that didn't go and beat all, I don't know what would."

He reached up and scratched off a stretchy collar that we had never seen before.
It was made from a little bit of lace, some smocking, and had a few buttons and random old fashioned pictures on it.
It was pretty nice, actually.

"Glad to get the bit of sissy stuff off my neck." Tiggie said, giving himself a shake.

I noticed there were some papers stapled to the collar.

"Oh, Continental overbooked my flights. They needed someone who was willing to be bumped, and they said they would hand over free mileage."

He gave his paws a quick lick.

" I figured, "what the heck" and volunteered."

We told him he was one lucky cat that he got those free miles, or else he would have had to pay us back for the tickets he took, out of his weekly allowance.

Tiggie just slowly closed his eyes and gave us one of his smug expressions.

"Did you actually meet Dawn then?"

(Sometimes that cat has such an attitude.)

We told him he would have to stay outside on his stump and consider what he had done, and that he couldn't come back inside until he was willing to say he was sorry. 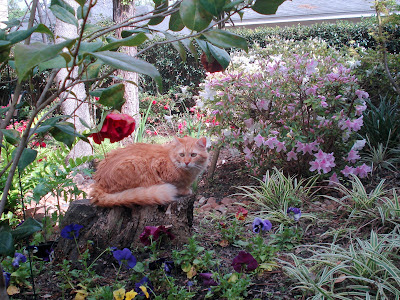 He was out there for quite a while.
He finally scratched at the door to come in.
"Fine, I'm sorry" he said, clearly not the least bit repentant.
Then he slunk off to the sunroom and curled up for a nap.

I'm pretty sure he saw Dawn.
He had glitter stuck to his tail, and his breath smelled strongly of coffee.
Hazelnut coffee at that.
Posted by Thoughts on Life and Millinery. at 4:36 PM

When he's finished doing his considerin' . . .do you think he could just use those free points . . .I have a movie I've rented for 10 days.
http://www.rottentomatoes.com/m/adventures_of_milo_and_otis/

I could use some company . . .and Tiggie could bring back a prize. Sound a little tempting?

I'll have to check to see if Tiggie's passport still has all those holds on it.
Last time he tried to go into Canada the border guard asked him where he was from.
Tiggie just kept saying "Texas, home of the free and the brave, God's Country, Remember the Alamo, Hook'em Horns.."
He went on and on, and was singing "The Yellow Rose of Texas' when they stamped entry denied on his card.

I'll let you know what I find out.

We keep telling him that Texas is PART of the USA, but since he was born in Texas, he doesn't really trust us, 'cuz we're from California.

I mentioned the movie though. After he catches up on his naps, I think he would be interested.

I think you are a much more handsome dog than the movie mongrel Otis.

Rusty & Roxy would like to come and dry out on that contemplating stump! It looks terribly inviting, cat and all!