I've got a funny feeling about this...

This morning this map was up on my computer screen:

When I hit the back key, it took me to the Continental airlines on-line ticketing site.

I noticed the little sticky note that we keep our super secret frequent miles user ID numbers on was knocked on the floor.

That was weird. So I checked our frequent flyer milage account and discovered a lot of our miles were gone.

I woke Bernie up, and asked him if he had booked a flight to New York during the night.
He rubbed his eyes, and grunted "No" at me, clearly disappointed that once again I was clueless about his travel plans.

Then he looked down at the foot of the bed, and asked "Where's Tiggie?"

(Tiggie is ALWAY next to Bernie. We call him our FOC: Faithful Orange Cat.)

I thought maybe Tiggie had just gotten up early and was using the litter box. So I went to check.

Tiggie wasn't in his "office." But there was a note attached to the litter box base. 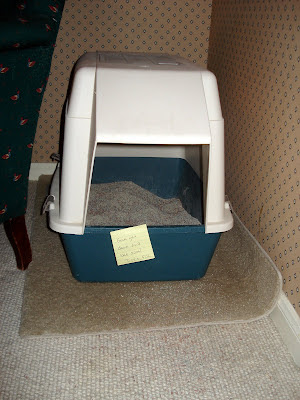 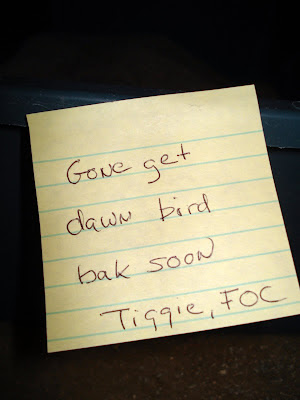 That really surprised me.

Tiggie usually doesn't go outside until after Bernie gets up. Why would Tiggie want to go hunt birds early in the morning, at dawn for crying out loud?

He gets Science Diet cat food and even the stinky canned cat food on Sundays, so he doesn't really need to go hunting birds at all.

I put together a cup of coffee, and went to check my favorite blogsites. That's when it hit me.

He's going to kill that bird thing she's giving away.

What can I say? 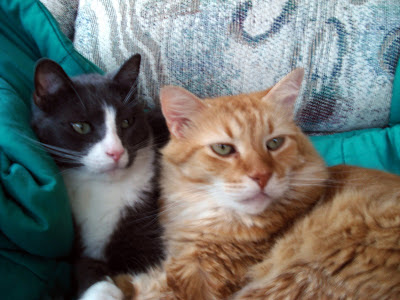 Posted by Thoughts on Life and Millinery. at 7:14 AM

Girl, you've got an over active imagination! After all those personality tests you just endured yesterday, it would appear that you have let loose. Are you going after Tiggy, and does he realize that Spring in New York is a wee bit of a change from Spring in Texas?? I hope he dressed warm, and wore a toque!

I don't think so, that bird is mine. I signed up for it. I would say more, but I have not a moment to spare. I must intervene. The bird is mine, I say.
I'll alert her immediately.
I hope I'm not to late.