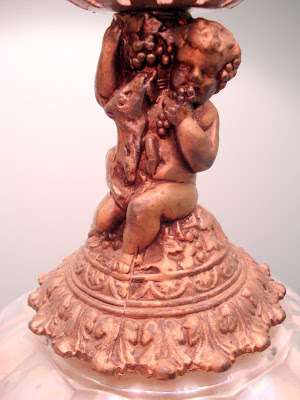 Isn't that just an adorable little cherub, or putti, or something or other?
I think so! 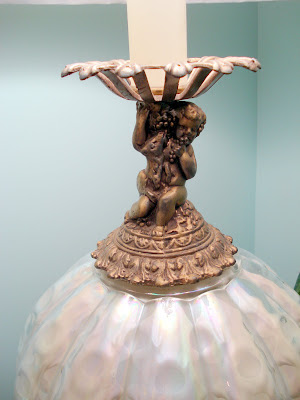 Look! It's part of a lamp!
The white globe is a pearlized glass, that looks kind of like lacy spots.
Doesn't it goes PERFECTLY with the polka dotted bedspread next to it in the guest room!? 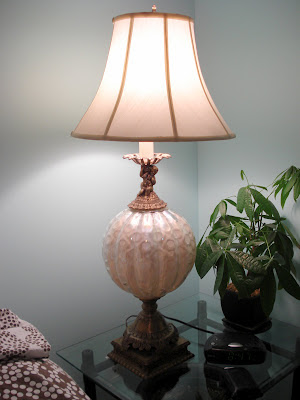 Of course it does!
And the best part?
It was free!

It had been sitting in Jeff's garage without a shade.

I thought it came with the house, a left over from the former owners.
Turns out there had been a company party at work, and for some reason, the party was decorated using junk from the local thrift shop.
They spent a total of something like $100 on JUNK, as kind of a joke for some reason.
(I wasn't there...just reporting what Jeff said.)
After the party, they were just going to throw all the junk away.

Anyway, there was this lamp. The shade was all junky and broken, but Jeff figured someone could use a lamp. So it sat in his garage without a shade for a year waiting for "someone" to need it.
Nobody did.

I'm not surprised. Most of Jeff's friends are in the 20something age group, and this lamp just doesn't quite fit 20something taste.

But then Jeff had some guys come and stay with him for a long ski weekend.
The guest room only had an overhead lamp.
He figured the guest room should have a nightstand lamp, but didn't want to spend money or take the time to go get one.
After all, there was the lamp in the garage...it would work.

So he screwed in a light bulb, and plugged it in.
(Didn't even bother to dust it off. After a year in the garage, it needed dusting, bad.)

When we arrived, there was the lamp.
Jeff said he figured I would know what kind of lampshade it would need.

I said we should take it to Target (a department store.)
He recoiled.
"No, we're not taking it anywhere" he said firmly. "We'll just get a bunch of lampshades and return the ones that don't work."
(I imagine the idea of walking into a store holding this big old lamp didn't appeal to him. Definitely not a guy looking lamp, I have to admit.)

The three of us stopped by Lowe's, a home improvement/hardware story to get a ceiling fan, and there we looked at lampshade.

The ones with the cute beads dangling on the edge were swiftly dismissed.
The scalloped edged ones were dismissed.

An oyster/beige one, and a white one with a little bit of a curvy edge.

The white one got an immediate thumbs down.

The beige one, I pointed out, was too short.
Neither lampshade worked.

"It is too short" I protested. "It needs to be bigger, the next size up!"
(This current shade, Bernie noted, cost $40. For a free lamp. That meant the lamp was no longer free, and a bigger shade would cost more. And take up too much space. Therefore, this shade is just fine.)

A little more discussion with my non-HGTV watching family members, and they allowed that the lampshade probably should be at the same level as the cherub. (I think they winced at that. Like most manly men, both the word and thought of cherubs make them wince.)

They also pointed out that the lamp works just fine just the way it is.

I relented, provided Jeff goes to Target and buys a new lamp harp there that will be three inches shorter than the one currently on the lamp.
He is to take the old harp with him to Target to be sure he gets the right size.

He agreed to do this.

There was no time frame negotiated for this task.

The other lamp shade (another $40 item) needs to be returned to Lowes.

Now let's do the math:

Need to return lamp shade to Lowes to get money back.
Likelihood of task being completed this week: 100%

Need to go and buy a lamp shade harp to lower a lampshade to the correct level with the cherub on the lamp.
Likelihood of this task being completed anytime before my next visit: Um...what is less than zero?

Awww...lamps with pearlized finishes and cherubs.
Can you say "Middle Age Women Love This"?

And to think we got it for FREE!
Posted by Thoughts on Life and Millinery. at 1:03 PM

I would venture to guess that your predictions are 100% right.

I can't help but notice the bronze shade on the cherubs and was quite excited since bronze and gold is coming back into vogue.

I like the lamp shade a lot and a shorter harp will do the trick.

Isn't Jeff fortunate to have you there to work out the details generally left to the women.

Terry was standing here while I was reading this post feeling bad for Jeff. Men.

I am so glad to read about the female struggles in a male dominated world! Such comfort was ill afforded me when decorating decisions were pronounced in this house! All I can say is, Jill, be glad you don't actually have to be reminded daily of the free lamp. May I suggest you purchase the harp yourself and mail it to him as an Easter gift? The cherub is adorable but it rather reminds me of Bacchus: Bacchus,
The Roman god of wine and intoxication, equated with the Greek Dionysus. His festival was celebrated on March 16 and 17. I think we should continue to view it as a cherub.:)

Say! Send some of that cute junk my way. You wouldn't BELIEVE the ugly lamps here! Everyone seems to be into super (ugly) modern and we are surrounded by putti and Engeli everywhere (perhaps that is why). In fact I live in the Engelburg building.

Yes, send him the harp.