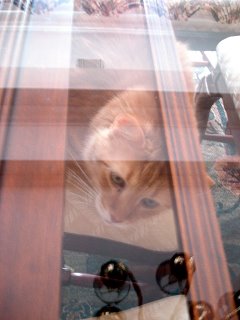 The good news is that I got an email from the Blogger Team out at the Googleplex.

They have fixed the glitch in my Picassa to Blog posting.

The bad news is that apparently I can only post small or large centered photos.

I haven't taken the time to write them again, or play around with it either.

Other than that, life is same-old same-old.

Tiggie is playing "Aquarium Cat" by sitting beneath the glass top of our dining table.

This is why I usually use table cloths instead of placemats whenever we have guests.

He sits looking up at our guests, following each forkful with his green eyes in a manner that is somewhat unsettling.

Othertimes he just looks like he is practicing being a "collectible" inside a glass display case.

The reflection below his nose is of the chandelier hanging above the table.
He's looking sad because Bernie is out running an errand. Sheesh. 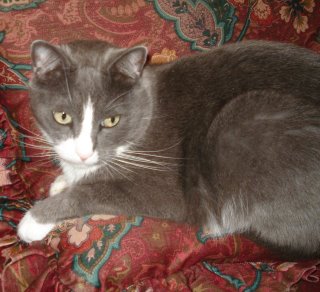 I'm trying to be fair and balanced.

I caught up with Hart as he was all cozy on the couch in the breakfast nook.

It took three tries to get this shot.

But he will sit on your lap and purr.
Something Tiggie never does. 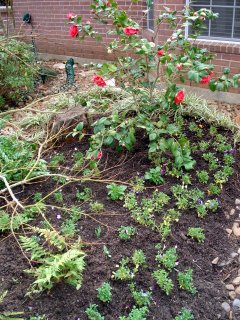 Both boys supervised me as I planted violas and pansies.

Bernie had worked the soil for me this weekend, and so all I had to do was dig holes and drop in the plants.

(You'd think the boys could of helped me there. You'd be wrong.)

I need to make another run to get another flat of pansies to finish up the bed.

There probably is a math formula I could use to figure out how many flats I need.

Instead, being nearly math illiterate, I just buy a few flats, plant, and then routinely make another trip.

(You'd think I'd remember from year to year how many flats I need to fill up the bad. You'd be wrong about that too.) 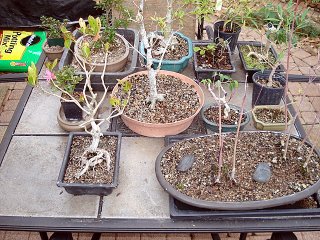 To thank Bernie for doing the heavy soil work, I weeded his bonsai.

You use tweezers to do that.

(That was new information to me. I was trying to pull the seedling weeds out with my fingertips, when B. caught up with me and told me Bonsai Masters use special tweezers to weed their bonsai. Ah so!)

I love the bonsai, because I love being able to have a tree on my coffee table, or counter.

Imagine, a tree that I can cart around with me the rest of my life.

Perhaps someday a great-grand child will enjoy these trees as well.

Wouldn't that be cool?

Posted by Thoughts on Life and Millinery. at 1:53 PM

OK Jill, if you were trying to eek out my jealousy, . . well done. Planting pansies in January? Today it has rained cats and dogs . .no offence to Tiggie and Hart. but it wasn't very fun at all.
I would think that Tiggie would be a entertainment feature for your dinner guests. Oh and not to brag but Tobee also entertained us yesterday by running up to himself in the mirror and then giving himself a little warning bark and repeated the game just for our amusement.

Thank you for the warm welcome, I won't likely be posting everyday just yet. I'm learning as fast as I can. It will depend on my tutor Lovella. The things that girl talks me into.
We typically don't plant a thing until May so we'll look forward to seeing your garden grow for now.