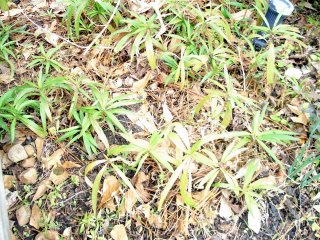 Some people, including myself at one point, BUY Mexican Petunia, because when they are young they have pretty lavender flowers.

Some people think dead leaves are great in garden beds.

Some people call a weed a volunteer. 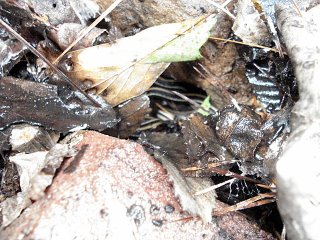 This is a collection of rocks, roots and leaves that was in the garden bed.


Oops, rock, roots and leaves, and a small tiny snake. 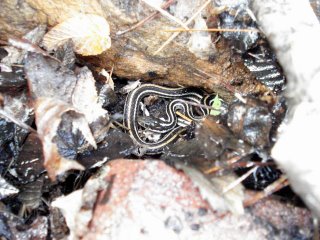 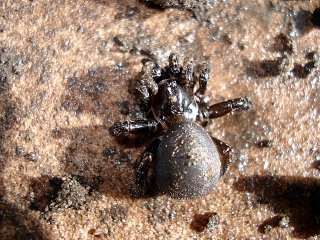 Harmless.
He's where he belongs, doing his job.
(giving the cats something to stare at...)

And what is this?
A big fat spider living under a rock edge.
I'm not sure what kind it is.
(Sure is ugly...)

This was our garden to tend.
Its boundaries to defend.
We knew what we were doing.

The petunias, despite their summer blooms had choked the garden bed with their woody gnarled roots and lanky leggy necks.
(We would not allow them to crowd the space.)

The leaves would harbor fungus, and not compost well,
(We wouldn't allow them to bank the borders, and clutter the view.)

The snake we checked to be sure it was harmless.
The spider we questioned, and noted its space.

We spread rich soil to enrich the native clay base, got gritty, and warm, and our faces became covered in smiles and sweat.

We felt good about our day.

A friend who has no time for gardens.
She tends those who are dying.
(Spending days without sleep, as only she know what the dying need.)
She cares for those who are sick.
(Spending years in that watchfulness, gone from her home multiple days each week.)
She fills out forms for those in need.
(Spending hours calculating, and filing, they wouldn't know how.)
She drives long miles to visit those in prison.
(Spending hours traveling for a brief visit and chat, who else would go?)
She opens her home to the homeless.
(Spending her understanding of alcoholism gained from a parent as a child to understand the alcoholic at her door.)

It's hard to say sometimes.

Weeds or flowers.
Dead leaf clutter or the beginning of mulch.
Space or snake.
Harmless or harmful.
Lost boundaries or open heart.
Exquisite care or expressed dysfunction.
Works for her or working her.
A call of God or comforting chaos.

Hard to know the boundaries of what to say to a friend.

She see flowers. I see choking weeds.
Posted by Thoughts on Life and Millinery. at 11:07 PM

I know people like that as well and my first instint is to think . .I should be working harder as well. At first I feel shame and then I remember who I am and what I am meant to do. I'm glad we have those people though, it must be their lot in life I suppose.
Give me the dirt and mulch and an afternoon with my husband (not so sure about the wildlife).
So, do you see a lot of snakes? We used to see more garter snakes but they are a bit scarce now. I saw one once on the road and I ran all the way home. I was only about 10 and home was a 5 minute run . .
I'm glad you had that time together. You built something as well . . .with Bernie.

In my gardening days I celebrated snakes (the good ones) and spiders. They eat the vermin that ate my fleurs and veggies. I'm celebrating winter here. Thank goodness it finally has come. Lovely, restful, full of promise. And soooooooo beautiful!
Kate Q:-)

Lovella-I'm SO not a fan of snakes. B. saw the snake first and cautiously guided me so I could see it.
If I had seen it first Otis would have been barking because my screams down hear would have hurt his ears up there.
During the seven years we've been here,in our garden I've seen one tiny (spagetti length) grass snake, and now this one
This is the first time in my life that snakes have figured into my world, in that I think before I reach before into leaves or plants.
Thanks for your observation about "lot in life". My friend's "rescuing" lifestyle disturbs me and has gone up another level. I hadn't consider it from the idea of it just being her lot in life to have that compulsion/calling.

. . kind of funny. I was thinking about when I first started lurking on your blog and I thought it was when you and Bernie went motorbiking but then I remembered about you writing a novel. I always thought that "sweet tea and Jesus shoes" was perhaps that novel . .so I checked it on the internet today and . . .found it wasn't you that wrote it. I had never heard of that novel before and now think I might like to read it. I read a novel called sweetgrass on holidays or vacation as you call it and I quite enjoyed the southern ways. Sounds so romantic.
Anyways, . . I scrolled down until I found your novel title and there it was. The funny thing is I remember seeing it now but at the time I thought what does that mean? "she pherds" . Now I realize it must be "shepherds" .. right? OK, I am off to poach some fresh from the barn eggs for our lunch.

I must say that this was a very neat, thought provoking post. I love your artistic photos. I found your link through Heidi's. I don't have a green thumb at all....actually it's more like black. I kill stuff. So good on ya. I'm a little jealous.