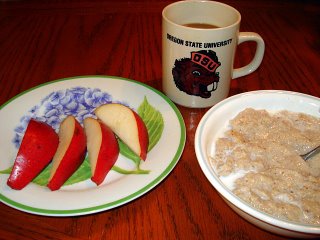 I miss blogging regularly. So I'm going to try to get back into the groove, even if it means just writing about the mundane. Or just posting pictures of the mundane.

Pictured: A nice hot oat bran cereal, the kind I got hooked on in Scotland, and finally found here as Red Mill brand.

I'm currently indulging in red pears. I think they are just extraordinarily beautiful. And they work well in our household: Bernie will only eat them if they are crisp, and I only like them when they are juicy ripe. A marital harmony feature that I imagine is rarely considered during the courtship process.

And coffee with sugar free french vanilla creamer in my Oregon State University mug (Go Beavers!) I usually have perfectly matched dishes and a place mat, but this morning, well, I have just let myself go.

As a means of recapping, I spent Saturday night in a fit of determination: I wanted to get that 5 inch wide mauve satin head band on the mauve straw hat. Using just one eye, I worked about three hours, trying a pleat at three points, adding beads on the pleats, ruching the ribbon, talking nice to the ribbon, speaking sharply to the ribbon...and at last the ribbon went ahead and warped in three places, each about the size of a pencil eraser. So bang goes twenty dollars worth of ribbon.

I now am raising my right hand and solemnly swearing I will never again attempt to use a ribbon for a headband. Or at least until I can go to France and study under some professional millinery expert who adds satin ribbons to all bonnets, using only one eye, regularly.

I will purchase some silk organdy and do a bias band as soon as I am up to making a run down town. 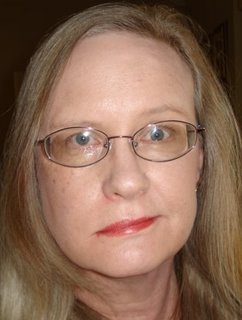 You may be wondering how I am faring otherwise with Bell's Palsy "jacking up my face" as daughter Laura RN put it.

Well, take a peek. This is as good as it gets. I'm holding my face completely expressionless. The slightest of smiles makes the whole thing degenerate into "stampede the horses and make all the dogs growl" awful.

Sunday afternoon I was coaxed out of my recluse mode by my friend Millie, who offered a good catch up, new grand baby pictures, and tea. How I wished I had thought to bring my camera!

I just hope my words will paint a good enough picture so that you can imagine what I saw:

Millie lives in a beautiful two story home, with two story windows across the back of the living area. The walls are cream, and all the accents are delft ware and dutch blue upholstery. That is fitting, as her husband is of Dutch descent, and still has family in Holland. Their blue point Siamese boy kitty Sam lounges in any place that needs an additional touch of perfection. Sam is a big cat, not the least bit fat, but with shoulders like a rugby player. He probably weighs about 16 pounds.

Millie has already gotten her autumn decorations up (I'm still in sea shell and sandcastle mode around here, I'll post my decorating later when the weather changes, supposedly this coming Thursday) and there were pumpkins and squashes and lovely fall floral arrangements around.

Ice tea was ready, as it was still in the very high 80's, and she had a three tiered hostess tray with butter cookies trimmed with orange and brown jimmies in the first tier, brownies in the second tier, and raisin cookies on the third.

Each of us had a ceramic plate shaped three dimensionally as a leaf. Mine was butternut colored, and hers was a brighter orange.

How lovely....and today is her birthday. Her husband spilled the beans by showing her the new bird house he was installing in her honor. Also, for the record, her new first grandchild Victoria is beautiful, with a mischievous smile at three months that reminds me of Scarlett O'hara at her flirting best. Victoria should have no problem living up to her name, she already rules her world with just a smile and a bat of her baby blue eyes. 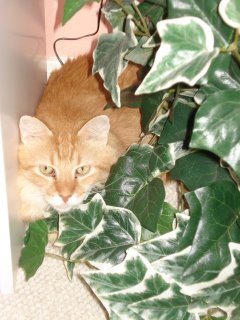 For all you Tiggie fans: He was in his own recluse mode.

Wish there was room in there for me too!

Posted by Thoughts on Life and Millinery. at 2:33 PM

Oh Darlin' you are SO brave! Hope that the Bell's recedes soon but please do keep blogging. I SO enjoy hearing what you are up to.

BTW: I have always loved bridal satin for draped bands - however, there is a wide variety of fabrics passing as bridal satin. The heavier the satin, the better the drape. Of course, Duchesse silk satin is the best but ridiculously expensive.