Roses, some cats, cherries and rain.

I worked at the library last night. When I went into my office, that is, the office that the adjunct librarians all share, (we with adversions to 40 hour work weeks), I found this rose in a glass vase and a get well card from Carolyn, one of the full time librarians who is so very kind, and helpful, and has a great sense of humor. She has in the past cheered me up in ways she would never imagine. Performing her duties, she is a bench mark of laser perfection in the profession 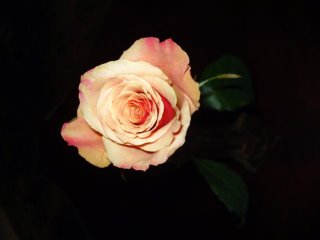 .
Her graciousness was futher demonstrated by the fact that the "Get well" wish was said to be from "all of us" (which I am sure is true....) even though it was she who thought to have the card and the beautiful flower too.

I love coral colors... something she couldn't have known.

It does drain me a bit being in a public setting answer questions with an eye taped shut, drooping mouth and slurred speech.

So having this rose with me on the desk last night was a real "awwww....." deal. 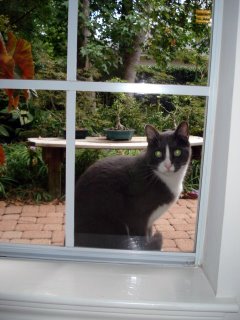 Today, Tuesday it is, Hart was staring at me from the window and mouthing his most whisker rattling meows.

I snapped the picture, and opened the window for him.

He shot inside, zipping past me to the center of the house.

Cats. Who knows what goes on in their little brains? 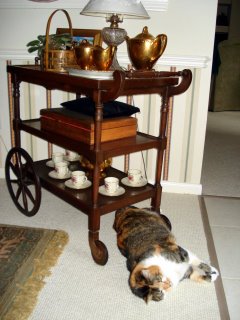 Tidbit, on the other hand, was her usual low energy self.

Clearly in need of a restorative cup of catnip tea?

I stepped into the garden and took a quick picture of the death defying volunteer cherry tomatoes.

Last June there was a newspaper article about growing tomatoes in Houston, and how they would never produce later than early July.

This bush thought differently about that, and is continuing to put forth two or three or four tomatoes a day.

Just the right amount for a salad ingredient or a quick snack.

As I took the picture it began to rain.

So that's what got Hart all stirred up! It was going to rain, and his weather whiskers sent out a cattish weather warning:

"Alert: All Cats: Get your tail inside, NOW!" 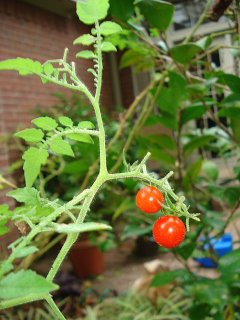 Posted by Thoughts on Life and Millinery. at 11:04 AM