An Heiress, a Lord, a Scottish Manor 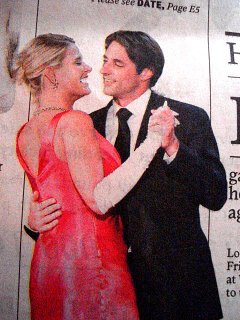 The local paper had this picture bumping into the following headline:

I thought they were so handsome and pretty dancing together.

So I read the article.

It seems Houston oil heiress Loraine McMurrey wed Lord Adrian Palmer in London last Friday, at Westminister Palace.
They had met two decades ago, when "he was married and she was living the good life as one of Houston's top-tiered jet setters."

When they met again, after his divorce in 2004, sparks flew, and Palmer proclaimed that he had adored McMurrey since first sight.

Her son gave her away in marriage during the formal morning ceremony.
After the ceremony the wedding entourage boarded a train for Scotland where Palmer owns a fabulous Edwardian country house, which is named "Manderston." (Don't miss seeing that last underlined link!)

Lord Palmer, the fourth Baron Palmer was educated at Eton, and is known for being an eccentric.

The entire write up had me in a romance novel haze/jealousy fit for several hours.
I imagined the train ride through the Scottish moors. I pictured the romantic walks up the silver staircase in elegant gowns, and sweet whispered endearments in the gardens.
Designers creating perfectly fitted attired for both of them. Handsome Adrian, and Loraine, her blond hair done up, wearing long white gloves, her chiseled jaw line tilted up in a classic pose.

If I had been that lovely, and an heiress, when I was young, could I have wed a baron? Could I have been the one to sweep into the ballroom with my hand held aloft by such a handsome lord?
I grumbled to myself...my pouchy tummy, saggy chin, total lack of grace on the dance floor...it would take a major overhaul to play in Loraine's league.

Then I re-read the second page.


There, in black and white was LORAINE! 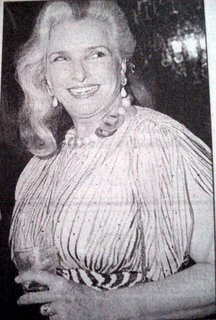 The dancing couple bumping into the headline went with a totally different story, about another fairy tale, the TV show "The Bachelor: Rome."

The blond in the red dress was also from Houston.

But the blond from Houston who scored a Lord and an Edwardian manor house...well, my urge to make myself over screeched to a halt. Re-write the script, alert the wardrobe department, we're featuring a plus size heroine in this romance.

I'll never be an oil heiress, so there's no point in even trying to compete with Loraine. Maybe she is just one heck of a fun gal, and money had nothing to do with the attraction. Besides, who knows what the eccentric Adrian looks like. And what do they mean by eccentric anyway?

I wish them well. I know by publishing this blog I have destroyed any chance of an invitation to any of their parties, on either side of the pond.

(Update below. Loraine really is quite the gal...likes to go bear hunting!
Thanks to Selwyn for sending the link!)

From the UK Daily Mail:

That's T for Texan . . .
Stetsons would not be inappropriate at the Palace of Westminster today when Lord Palmer marries oil-rich Texan millionairess Loraine McMurrey.
After a whirlwind romance, the bride-to-be for 55-year-old Palmer — heir to the defunct Huntley & Palmer biscuit empire — is an artistic divorcee who once dated CNN tycoon Ted Turner.
At 68, she is 13 years older than the groom and will be given away by her 37-year-old son.
The ceremony will be held in front of 100 family and friends in the Palace of Westminster chapel followed by a reception in the Lords.
Curiously for a peer who often joins debates in the Upper House, cross-bencher Lord Palmer has decreed that there are to be ‘no speeches’.
A regular at Ascot and Wimbledon with homes in London and Houston, blonde Loraine — formerly married to eye surgeon Louis — is a favourite of the Texan gossip columns, where she is frequently described as ‘perfectly proportioned for the décolleté outfits she fancies’.
She is an Anglophile who studied Art at Edinburgh University and once took a course at Cambridge on the British Secret Service. She also campaigns for the castration of sex offenders.
When she was swept off her feet by billionaire Turner, Loraine trilled: ‘I’m going bear-hunting with him in June. He really rolled out the red carpet for me, and then some!’
Tempting fate, she added: ‘He did have a couple of dates with Jane Fonda, but that’s over.’
Alas, Turner went on to marry Fonda in 1991, perhaps fortuitously leaving Loraine free to become the second Lady Palmer.
Loraine first met the peer in the 1980s when Adrian Palmer, whose family lost control of its biscuit empire some years ago, was already married. They renewed their acquaintance in March this year.
There is a marked contrast between the financial standing of the bride and groom.
She features in the Texas Big Rich wealth bible. He, on the other hand, struggles to find the £100,000-a-year necessary to maintain his magnificent 119-room country home Manderston in Berwickshire, which was the setting for the 1996 film of Andrew Morton’s book on Princess Diana.
The Queen showed her displeasure by dropping Adrian from the Royal Company of Archers, her official bodyguard in Scotland.
Today’s wedding will be followed by a gala dinner for 200 at Manderston tomorrow night. Palmer’s three children by his first wife Cornelia, whom he divorced two years ago on the grounds of her ‘unreasonable behaviour’, will all be there: Hugo, 25, Edwina, 24 and George, 20.
Says Lord Palmer: ‘It is a private, low-key affair.’
Says my man with the confetti: ‘Adrian is delighted. They are not having a honeymoon: he is taking his new bride to Manderston, where she will experience her first Scottish winter.’
Posted by Thoughts on Life and Millinery. at 3:19 PM

My, but it gets even better. The bride is 13 years senior to the groom.
http://www.dailymail.co.uk/pages/live/articles/columnists/columnists.html?in_page_id=1772∈_article_id=410169∈_author_id=230

I think there's a novel in this story.