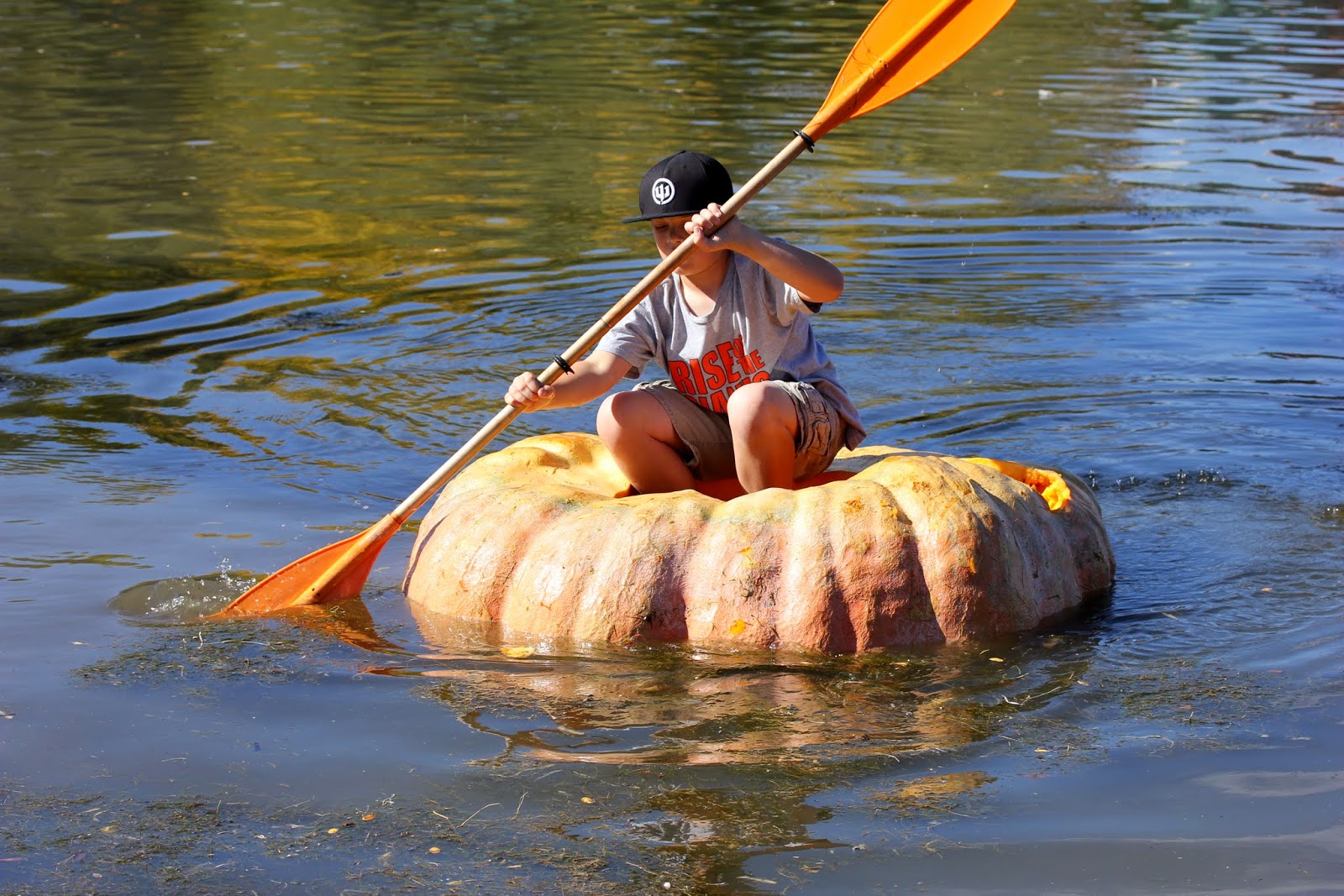 Saturday's newspaper had a notice of the 4th Annual Pumpkin Regatta that was to be held in our nearby Sugar House Park.
I imagined pumpkins would be floated in the park's duck pond, with some kind of contest related to the floating pumpkins.
I had NO idea that people were going to racing in pumpkin boats!

The Utah Giant Pumpkin Growers apparently bring some of their monster sized pumpkins to the pond each year. The pumpkins are hollowed out and folks paddle them through a race course track between buoys. 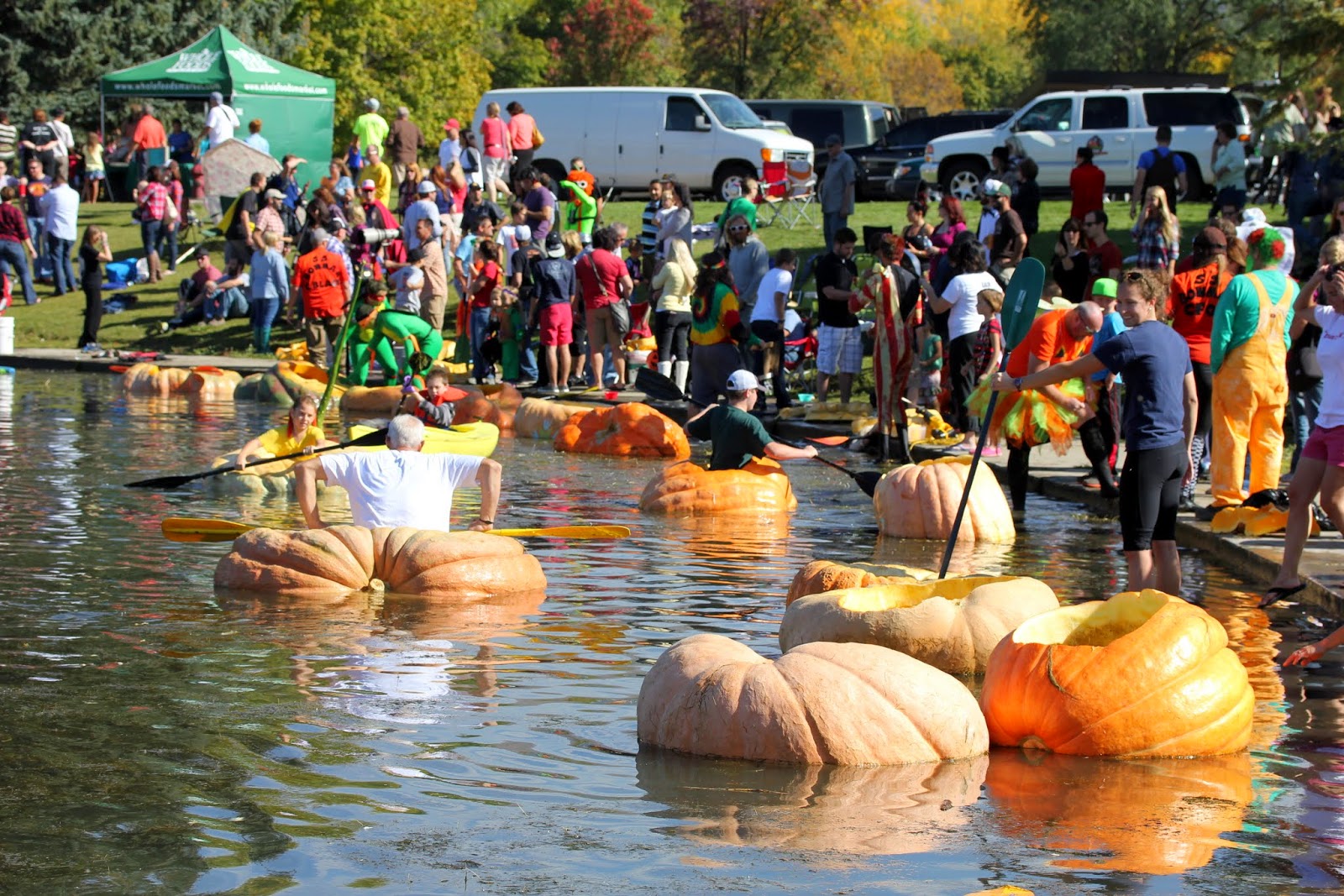 After the race (which I missed...) folks were welcomed to take a turn at paddling around the pond inside the various pumpkins.
There were folks in waders at the ready to assist with any capsized squash.
Next year I think I will go to the event in my own waders and take my own turn at pumpkin boating. 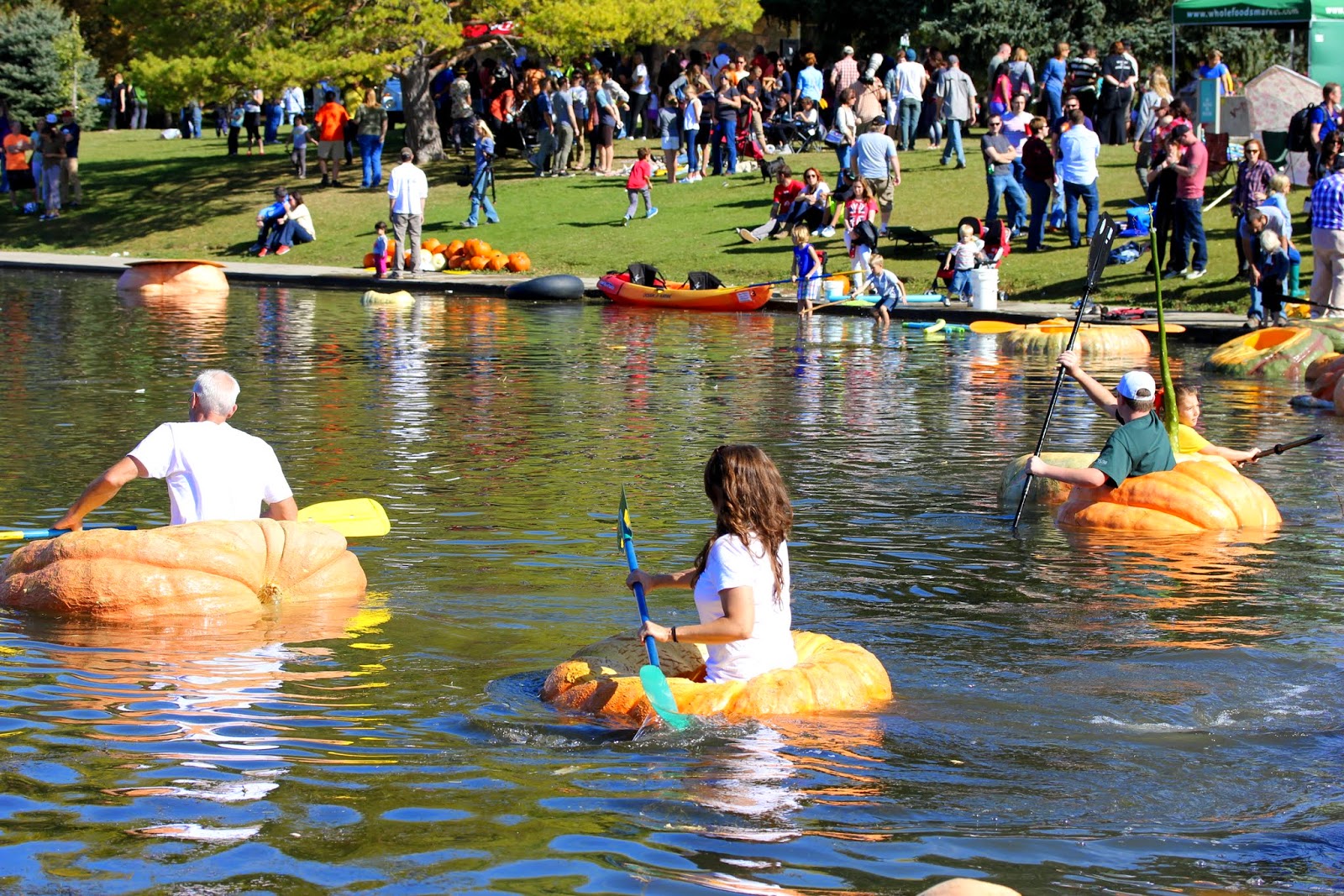 Full sized adults were paddling around the pond with ease.
I would love to see our grands taking a turn in a year or so. 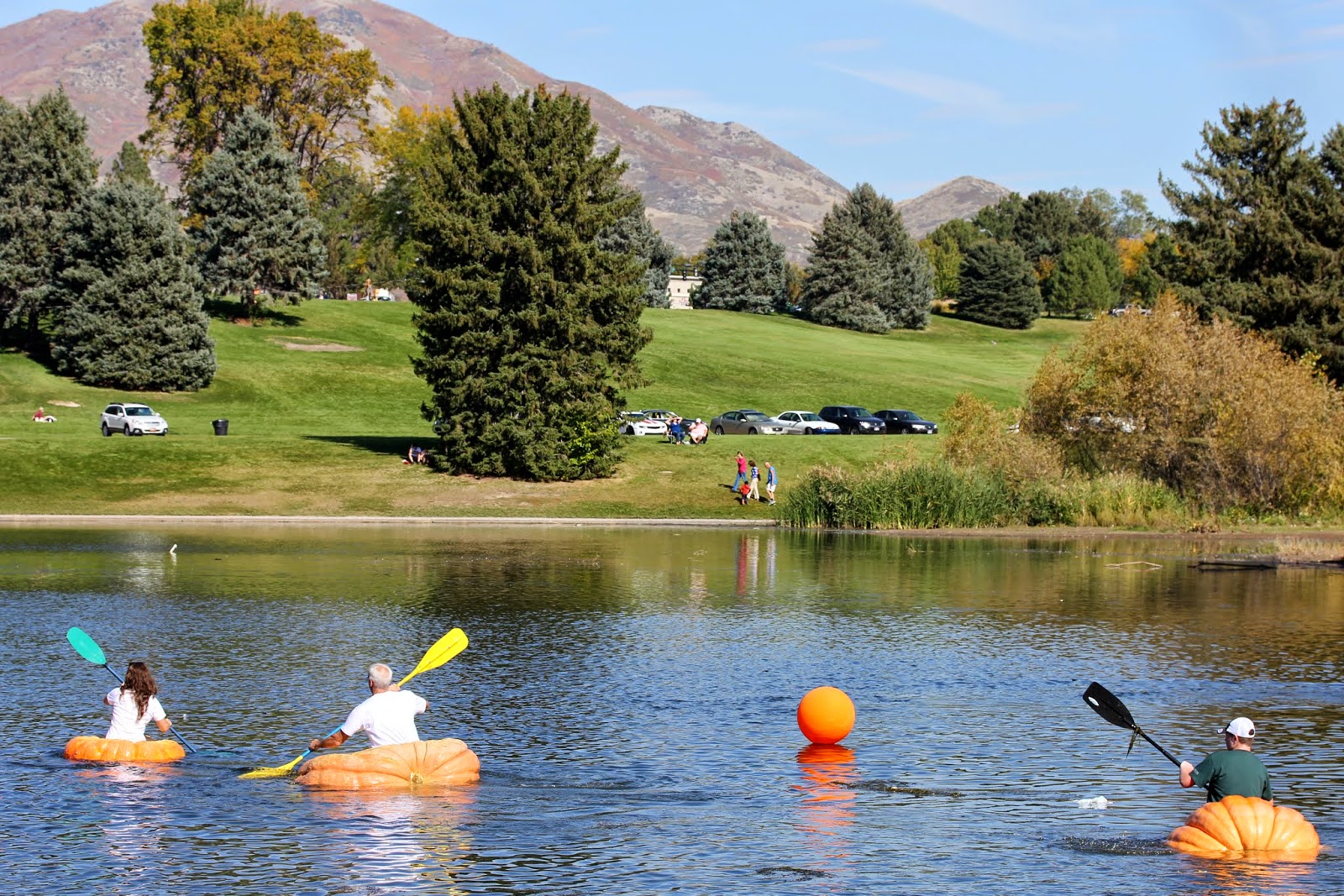 A beautiful setting...a fun annual event that was held last year in a downpour.
(The orange buoy was part of the waterway course.) 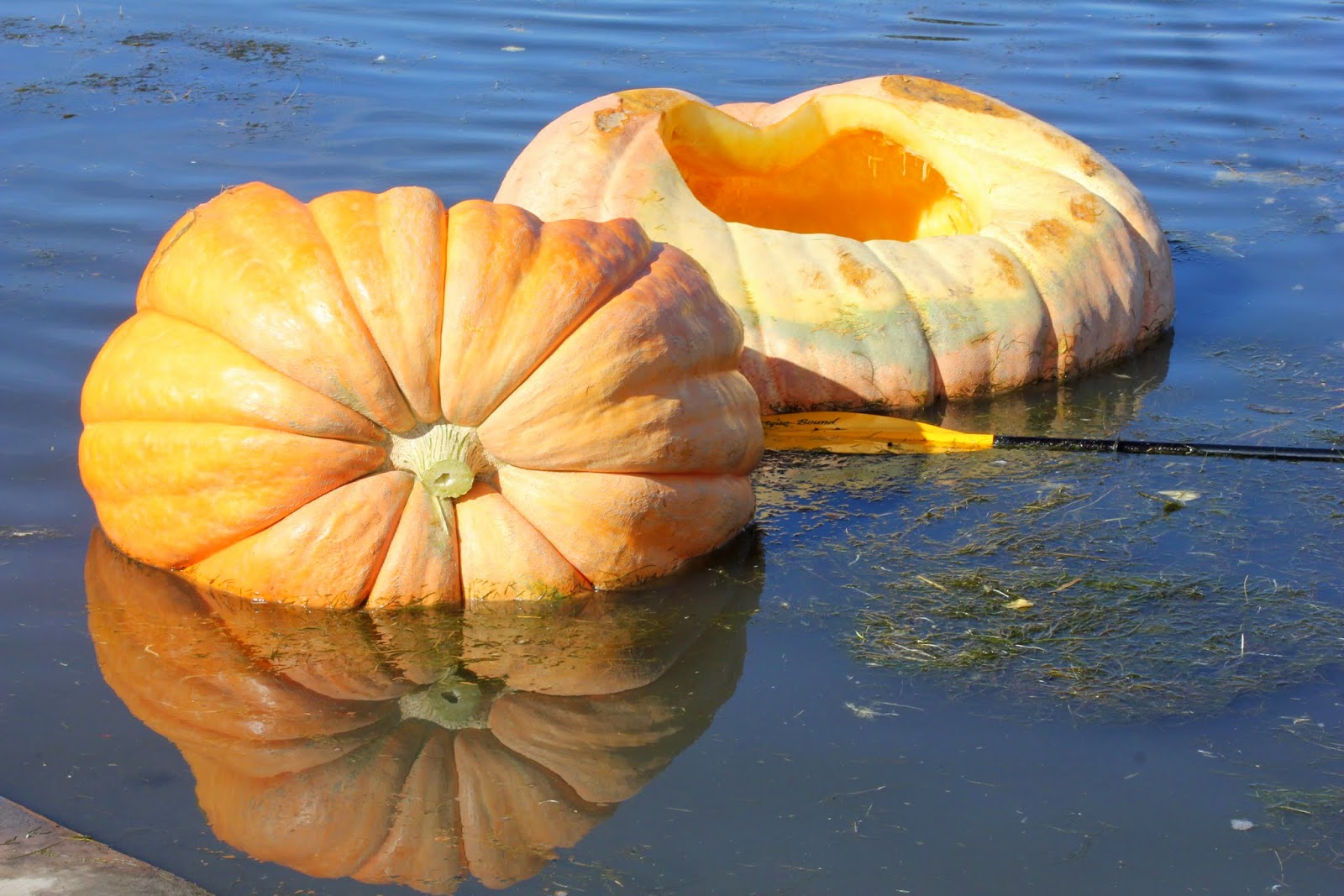 Gosh the pumpkins were beautiful and huge! 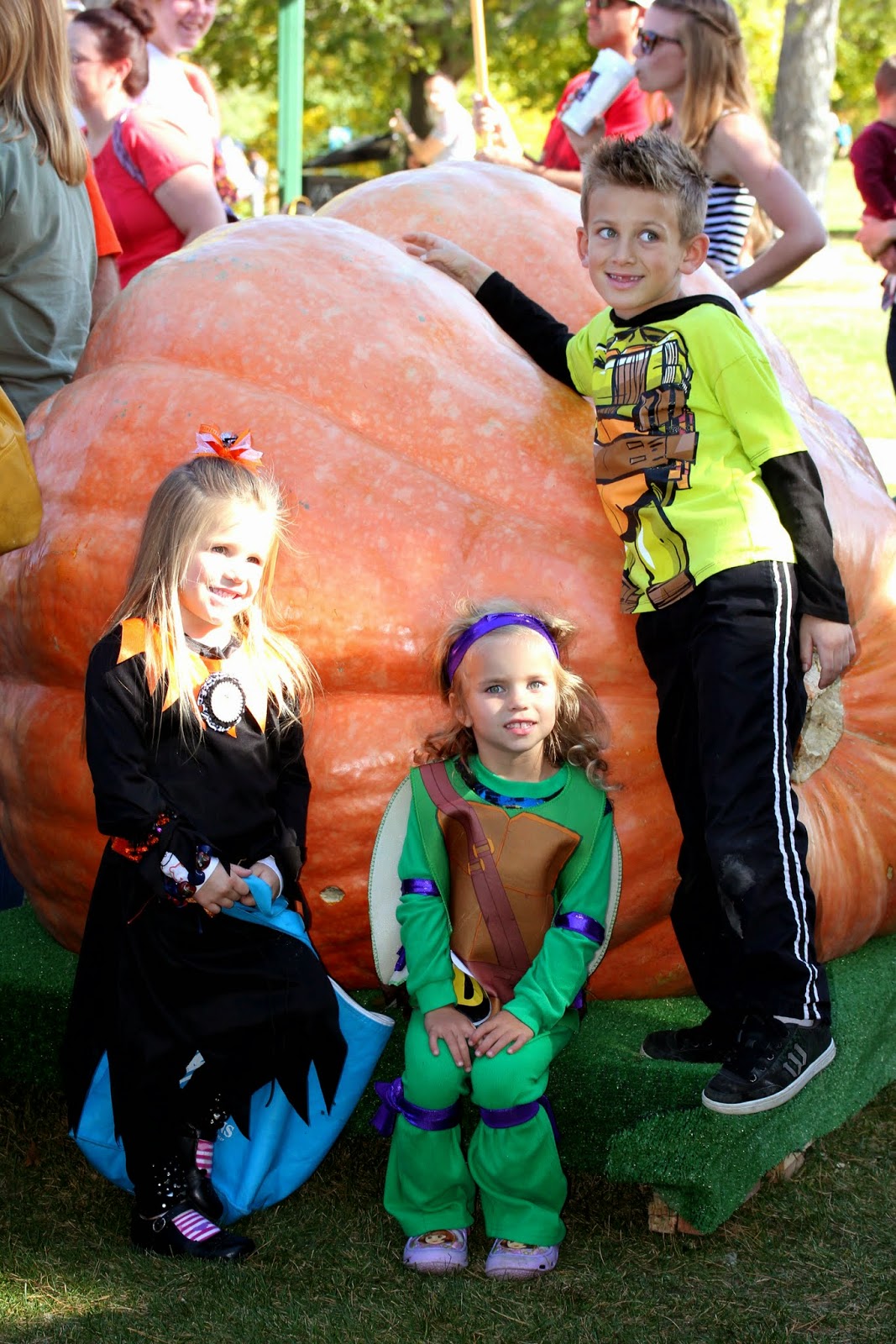 A prize was given to the largest pumpkin grown and brought to the event.
My jaws dropped when the winning grower explained that the pumpkin seed germinated and the pumpkin was harvested in a 45 day span, and it weighed 1,744 pounds.
How is that sort of growth even possible? 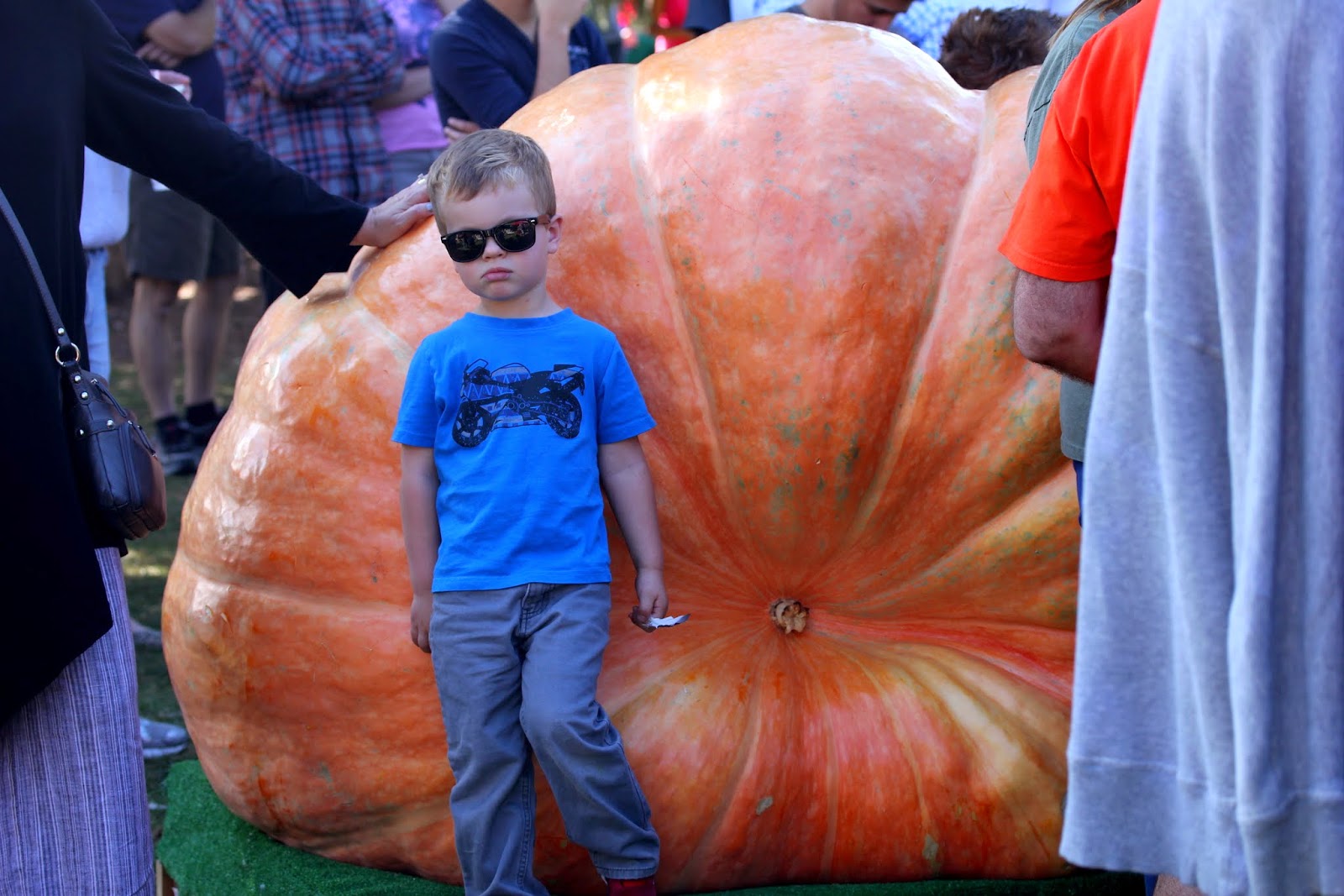 I would think if you stared at the pumpkin you would have been able to see it actually grow at that rate. 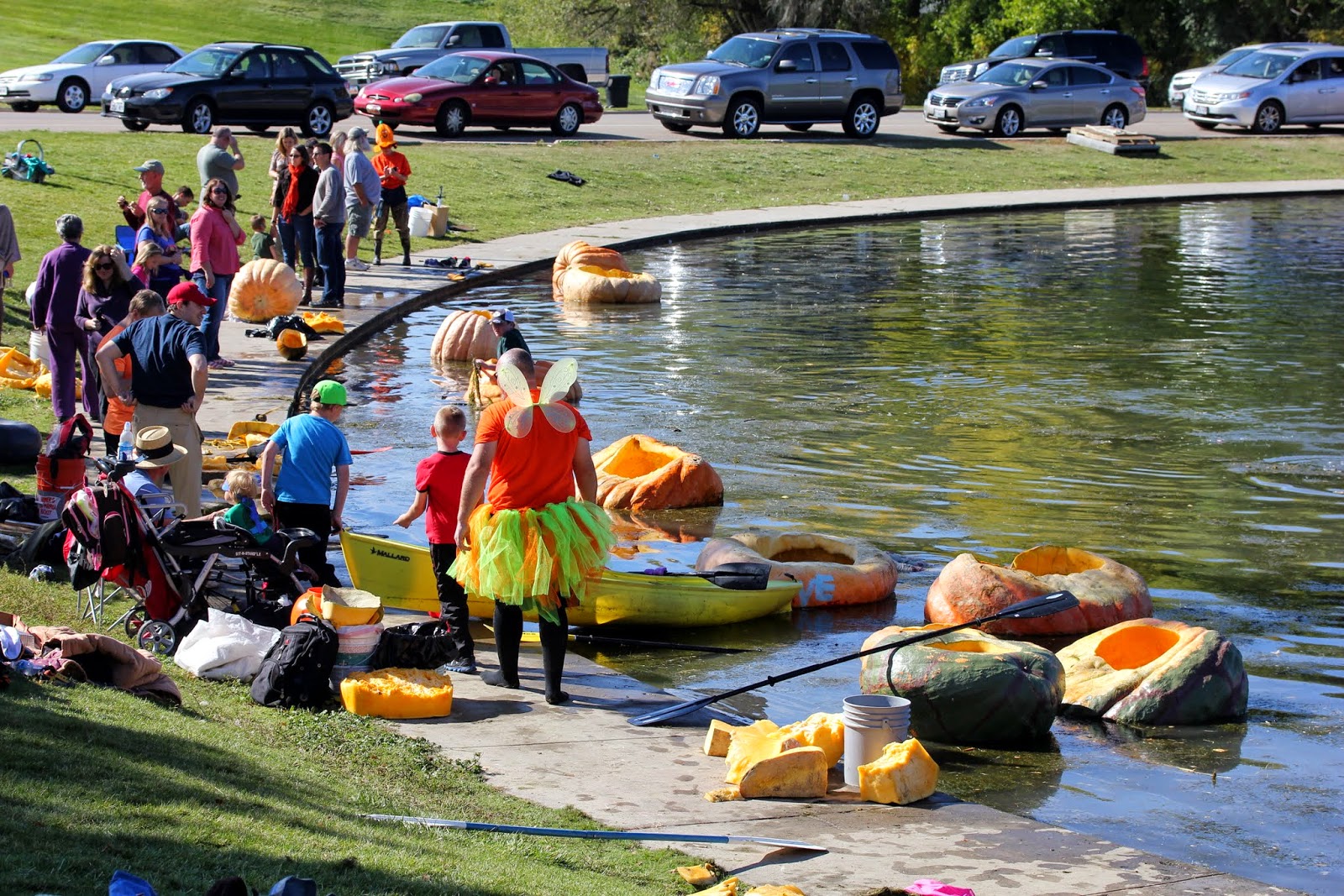 Fun costumes...and good (if not especially clean) fun for all. 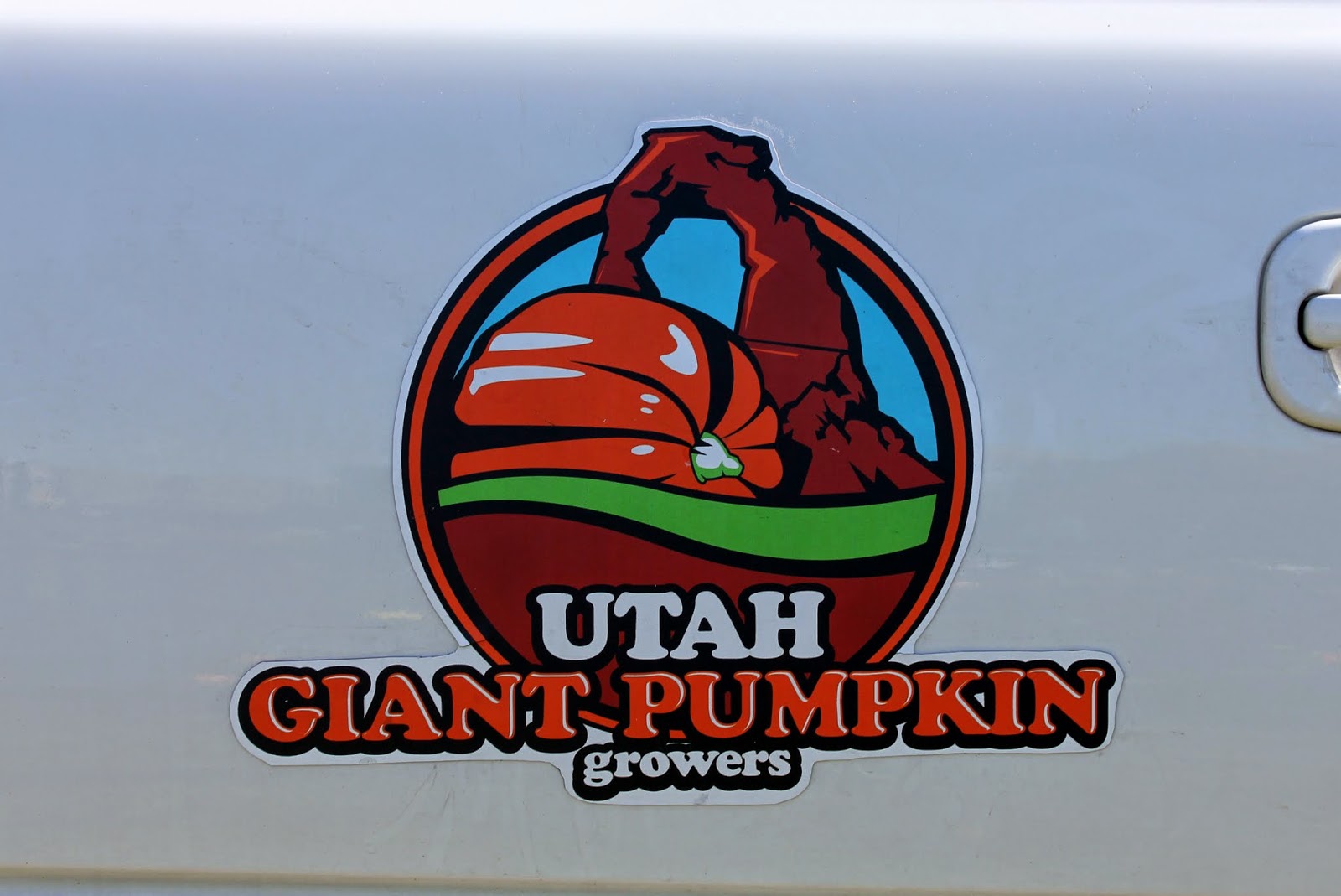 This was just one of three events hosted by the UGPG.
Next weekend there will be a giant pumpkin drop.
Apparently the giant pumpkins are dropped cars, pianos, and other objects for March of Dimes.
If only the two grandsons were a little older...what boy (or girl, at age 60 for instance) could resist wanting to see that sort of gory and mayhem happen?
Then later in November on Thanksgiving Day any pumpkin that was grown weighing over 200 pounds can be donated to the local Hogle Zoo for the elephants to have for their Thanksgiving Day meal.
Check out a video of the Feast:
https://www.youtube.com/watch?v=N1pJe9auvnQ&feature=player_embedded
Pretty neat pumpkin fun options around here, huh?

Posted by Thoughts on Life and Millinery. at 4:03 PM

I think this was a first for me to see a pumpkin regatta!!

That is too funny! I bet there were lots of laughs and good times had.

Wow, amazing! Floating pumpkin boats are totally new to me. I love it when new surprises like these come along.

The things people think of! This sounds like a hilarious event! I hope you do paddle around in one next year and have someone photograph the occasion!

Oh that is fantastic. I have only ever heard of giant pumpkins. It looks like it was a really fun time all around.

You folks do the neatest things in Utah! Gore and mayhem indeed!

I so enjoyed taking my time and reading each post. You make the documentary so much fun to read, and your pictures are so interesting. I never saw pumpkins used as canoes. Your little Calvin is adorable! I can see that he brings you all so much joy.