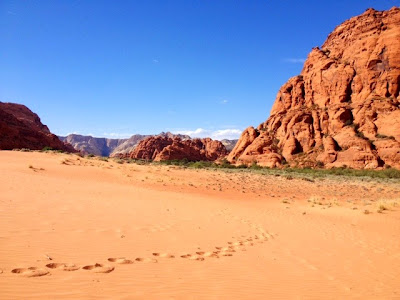 Saturday afternoon in Snow Canyon  after we got back from Pine Valley I went over to the regular, non-petrified sand dunes near the entrance of the park.
The soft, soft sands were softly rippled by a very light breeze.
My every foot stop left a mark on the pink sand surface. 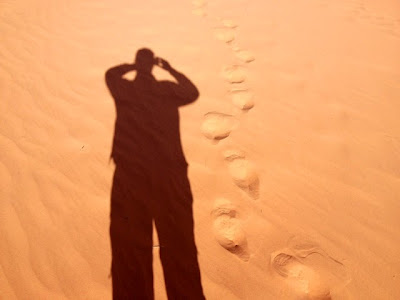 As a child my parents once took my brother and me to a huge sand dune in Arizona.
We rolled and romped and burrowed up and down the dunes at sunset.
Some of my favorite childhood pictures were taken as we played with the setting sun as our backdrop.
I was slightly tempted to do the same wild play in these dunes.
The knowledge that if I did so play in the sand there would be sand in every crevice my body had.
That thought gave me pause.
In the end I skipped wallowing in the sand after all. 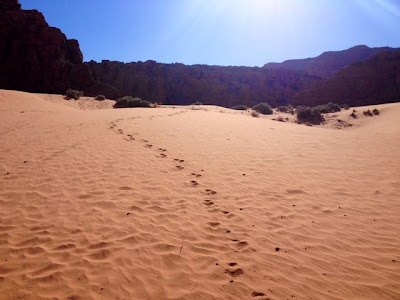 The dunes really were beautiful.
Isn't it amazing how many way the Earth can demonstrate beauty?
I returned to camp in time for dinner and storm watching.
That night was THE night of the huge wind and rain storm.
Drama, drama and more drama!
Well as you know from the last post we did survive the night. 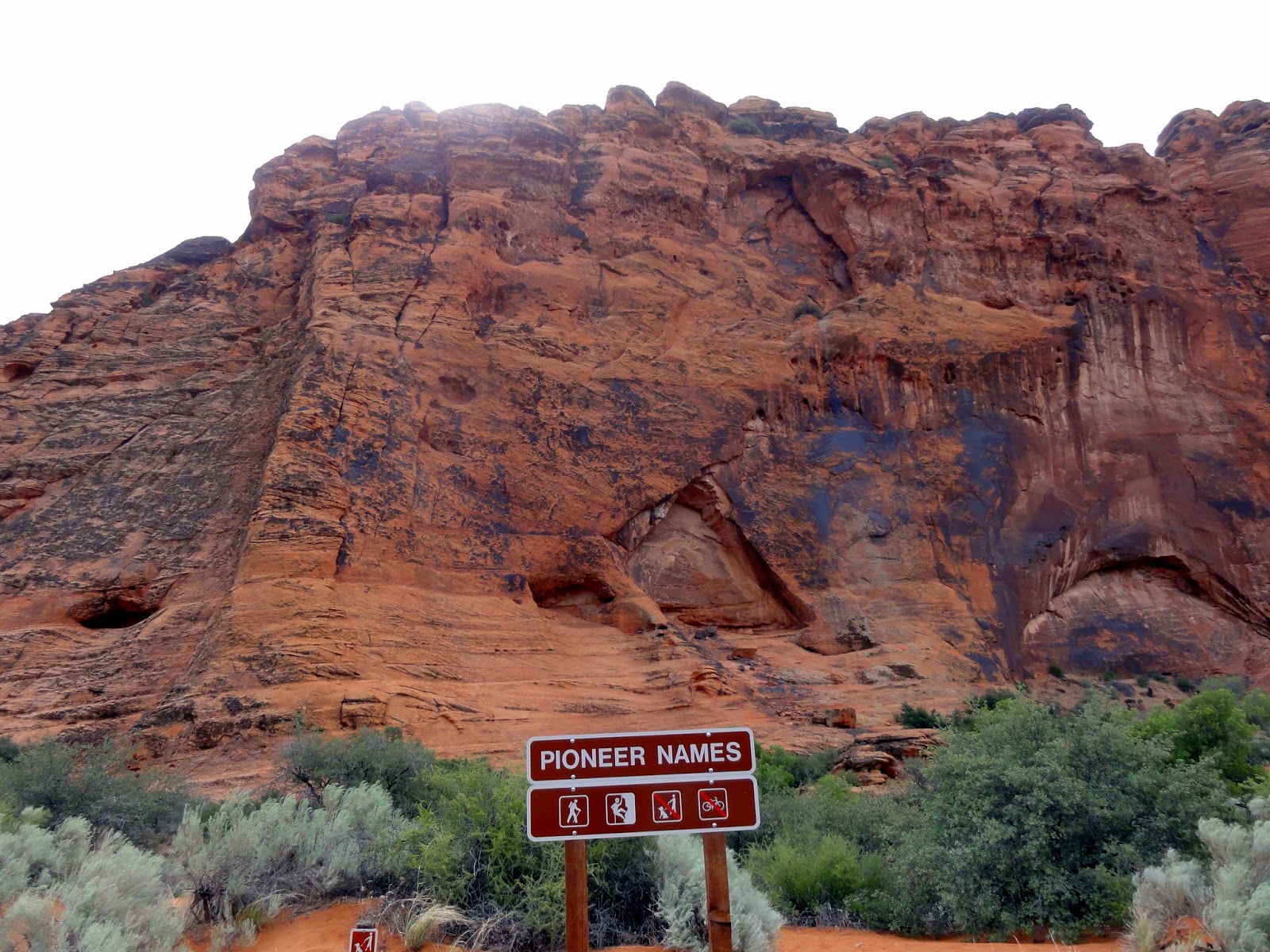 As we drove out of the camp ground Sunday morning the storm had calmed to just a light drizzle.
We had meant to stop and see the Pioneer Names while we were in Snow Canyon but had just not gotten around to doing it.
Since the weather seemed to be clearing we decided to go ahead and see what that was all about.
It was less than a quarter of a mile from the main road anyway. 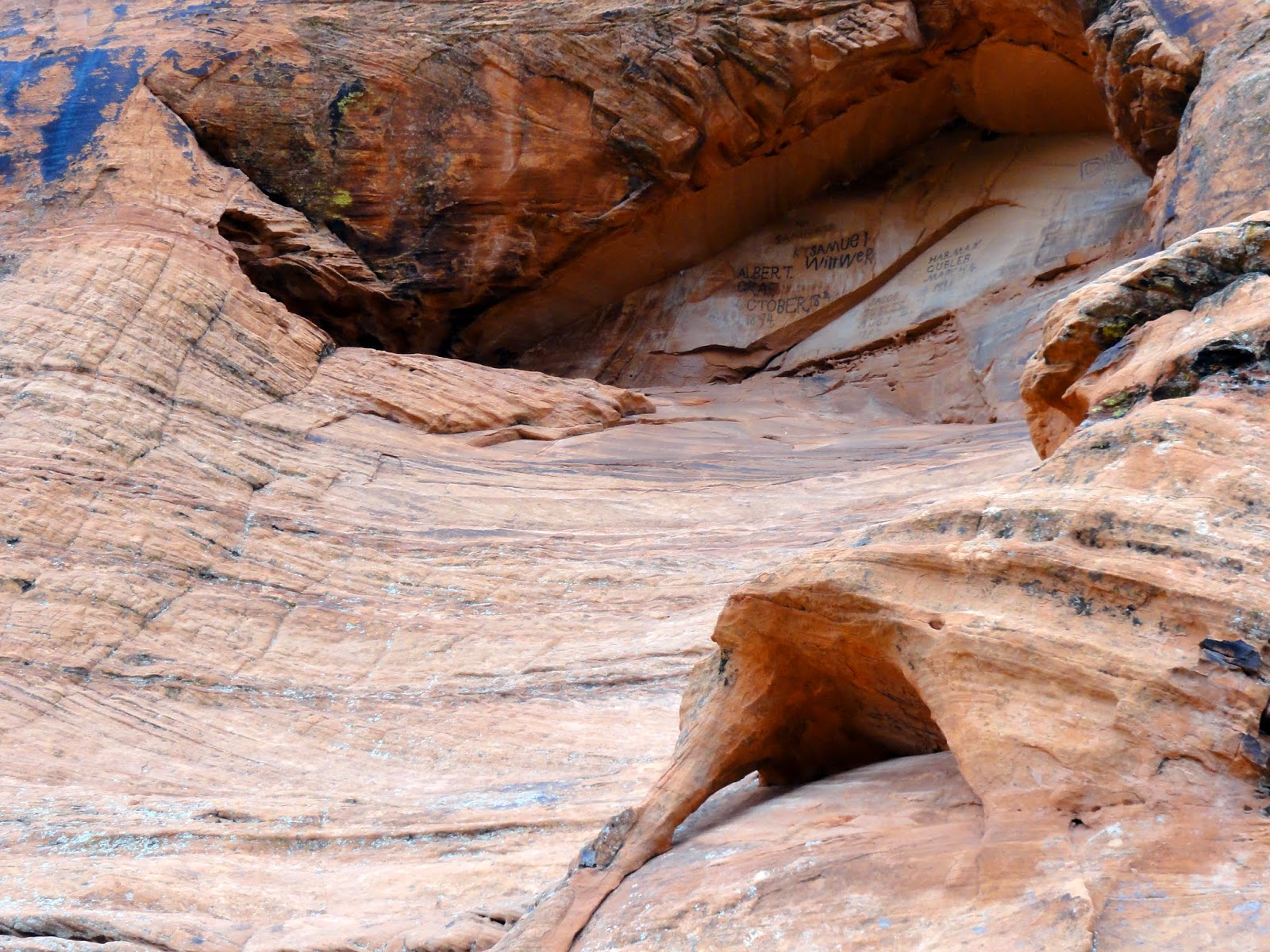 It took a minute to look UP high enough to see the names that the passing pioneers had etched upon the stone and then darkened with wagon wheel grease. 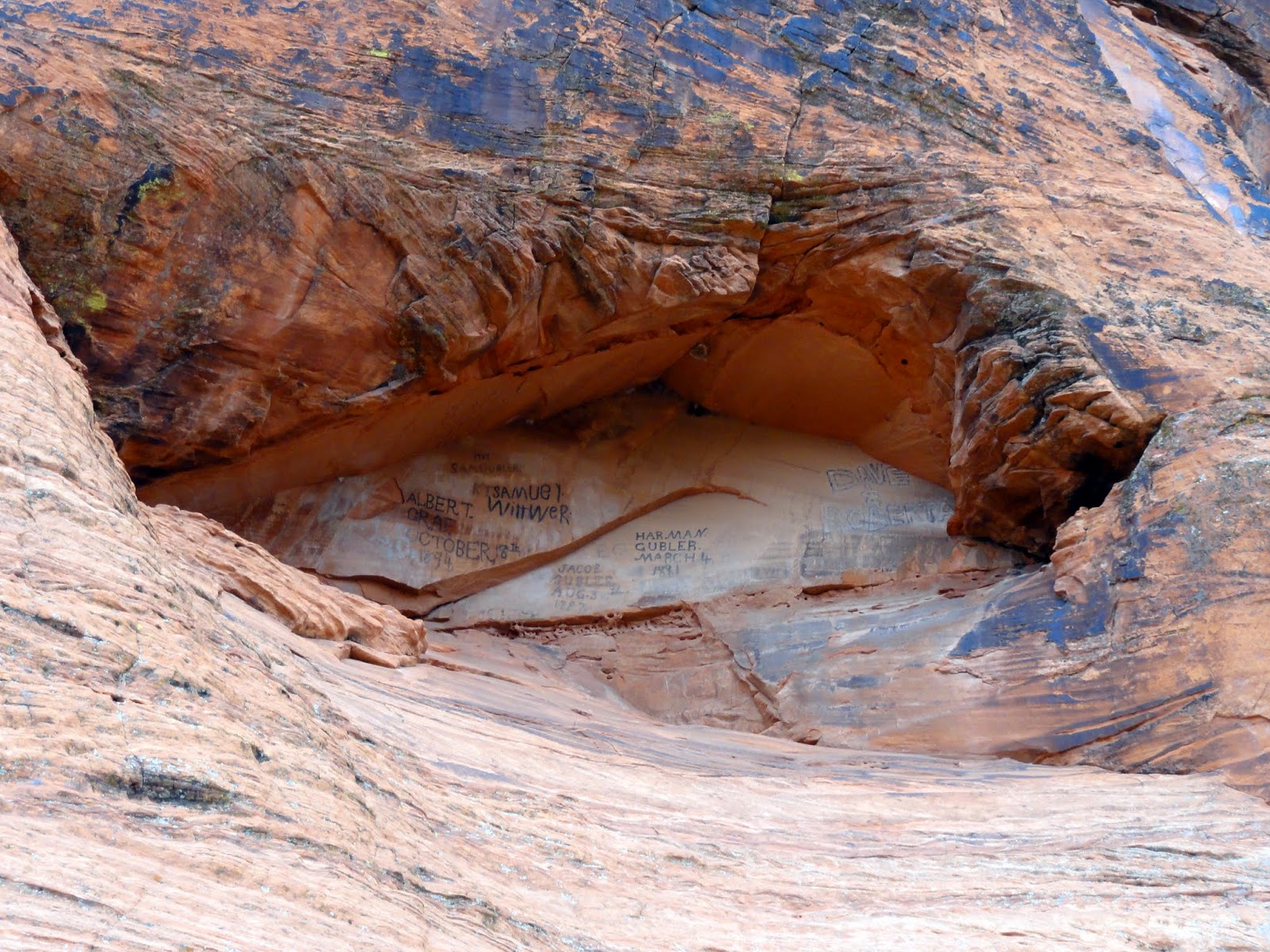 Pioneers that had come through here in the 1880s apparently were willing to risk their necks to leave their marks on the place.
I pictured two scenarios:
First:  A bunch of husbands deciding this would be something cool to do and their wives telling them to BE CAREFUL and DON'T GO BREAKING YOUR NECK!
(Imagine how it must have been to have traveled in a cover wagon in the heat of summer/cold of winter, pregnant with a couple of kids along.  Your husband risking life and limb after all that just to put his name up there? You have GOT to be kidding me.)
The Second Scenario:
Teenage boys with a little time on their hands.
This time their mom and their dad telling them the same thing as was said above.
I just can't come up with a different take on this.
Unless the pioneers were just plumb crazy, which frankly considering what they undertook to get to this canyon, is probably a spot on judgement.
Sadly I can see where modern folks have attempted to leave a spray painted note of their passing by.
Maybe in a 100+ years those spay painted bits will be thought of as historic too.
All in all I think we spent ten minutes walking to the Pioneer Names, taking a couple of pictures and then walking back to the car.

Right outside Snow Canyon State park are many housing developments that have beautiful landscaping, water falls and sculptures along the roadways leading to the development entries.
I was especially impressed with this circle of art created with natural stone, local flora and wonderful sculpture.
I had Bernie circle by it twice I could get a picture.... 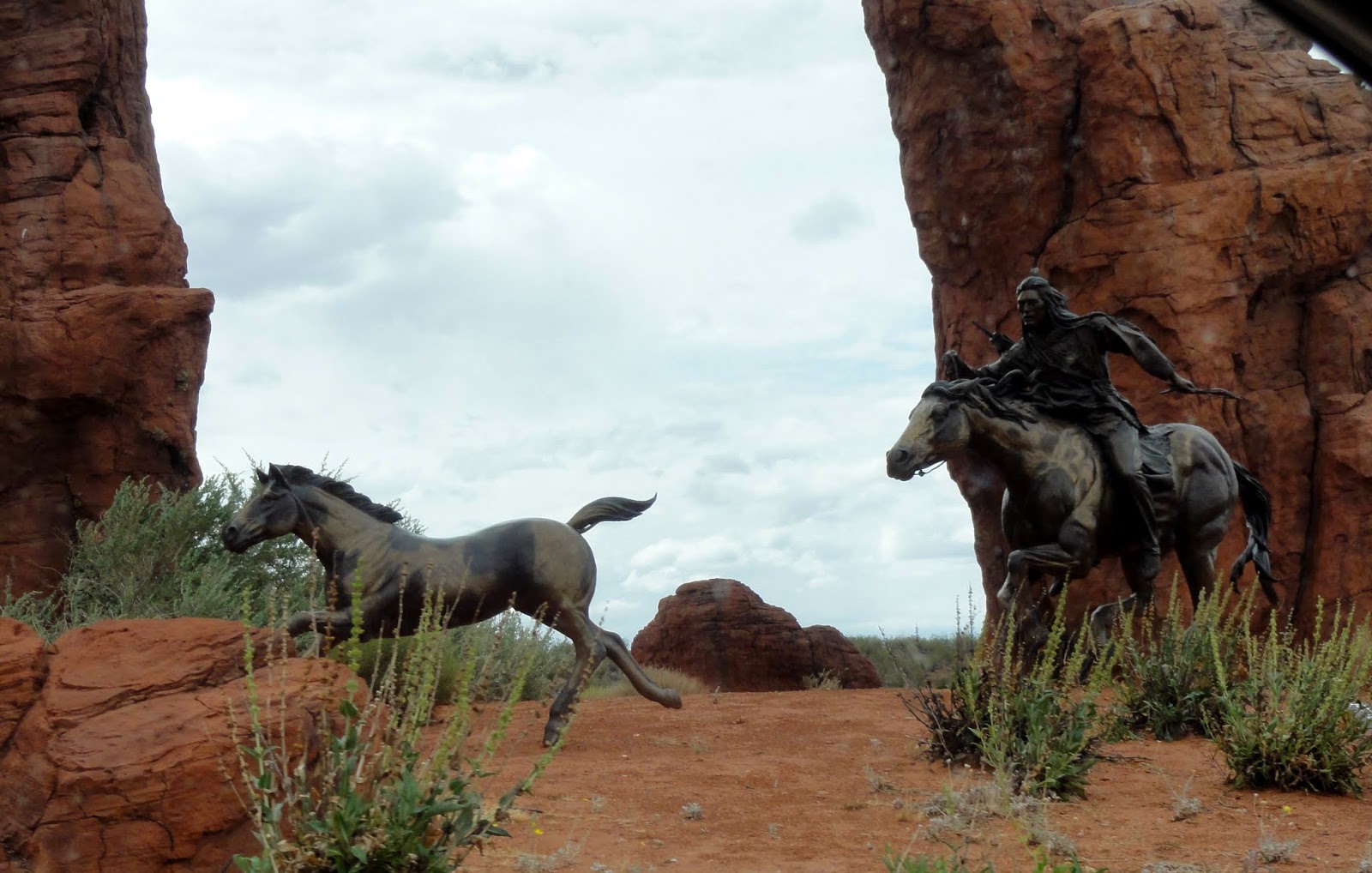 There were several running ponies in the installation.
Very well done!
Especially considering this is municipal art, and it is heads and shoulders above some of the "modern" art in other areas where we have lived/visited.
So we did go through a drive through fast food joint and got food for breakfast, since breakfast at our camp ground was out of the question.
It was smooth sailing after that.
The five hour drive home was off to a good start. 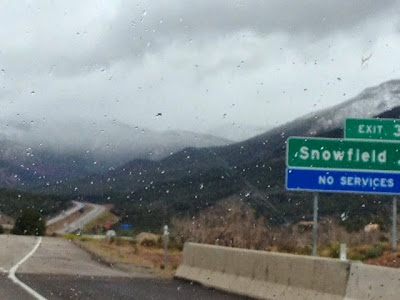 About two hours into the drive, as we approached what proved to be an aptly named town, we noted snow flurries and heavy weather ahead.
I giggled a bit...Imagine snow in the middle of May!
What a great Mother's Day gift to ME who loves snow! 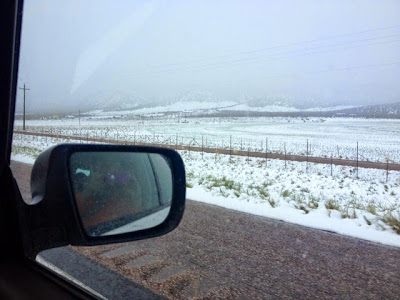 The flurries thickened and the fields around us that had been warm and green on the trip down were now buried in white. 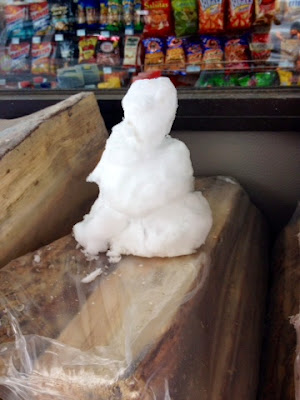 Bernie stopped for gas, and I swooped together a small snowman, singing the currently popular tune "Do you want to build a snowman?" as I worked.
I got in a small snowball fight with Bernie before we went back on the road. 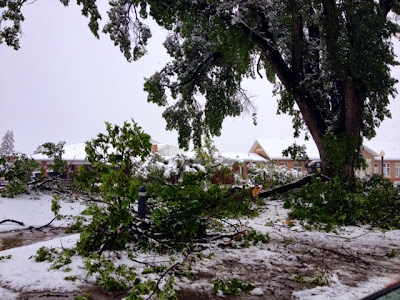 As we drove out away from the gas station and through town, the snow stopped being so fun.
Trees were broken and the power was now out in the town.
Radio broadcasts stopped as did service to my cell phone. 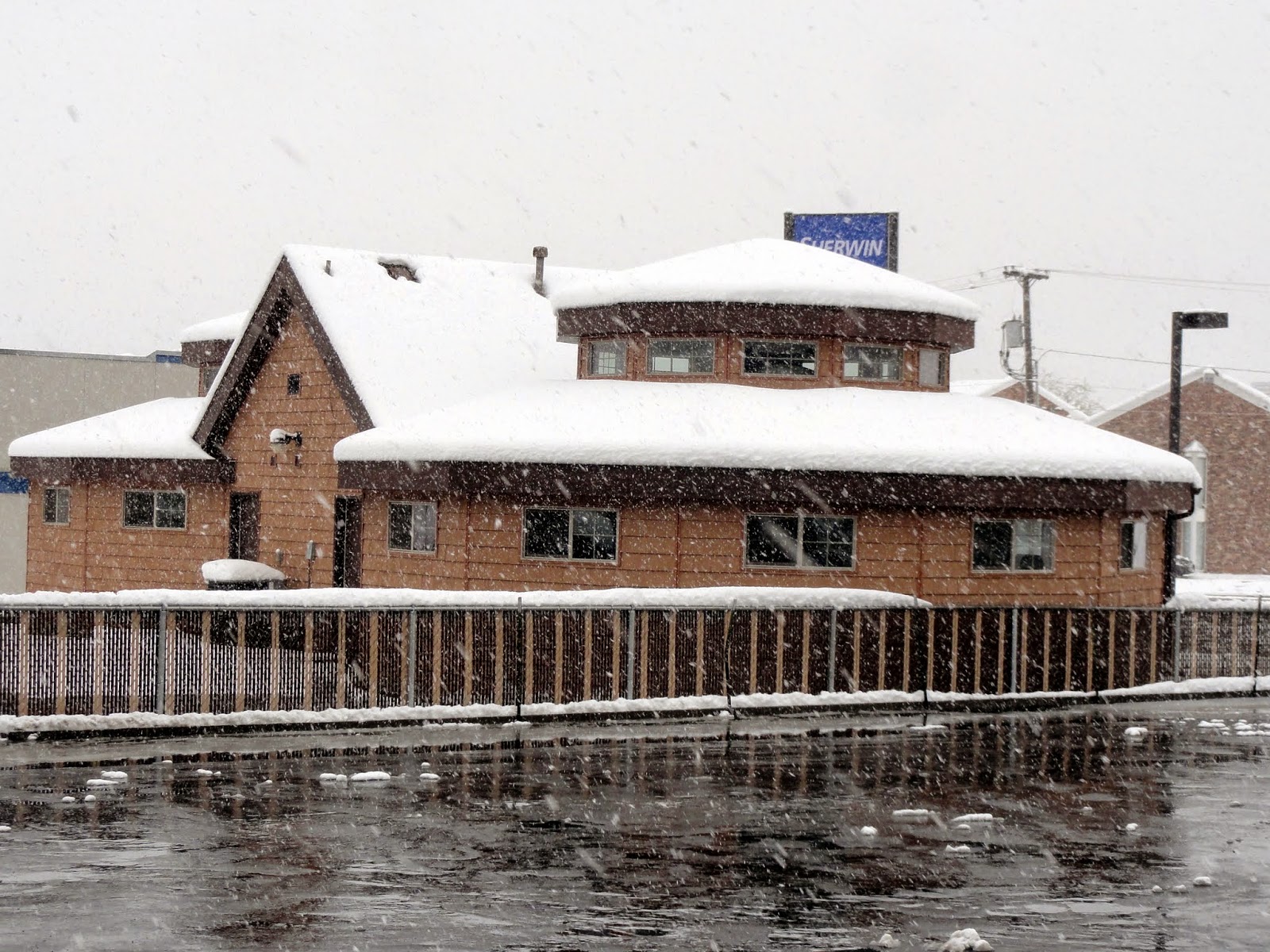 That was a LOT Of snow on that roof top and it was still coming down hard.
Remember, the day before it was hot and there was no snow to be seen anywhere, 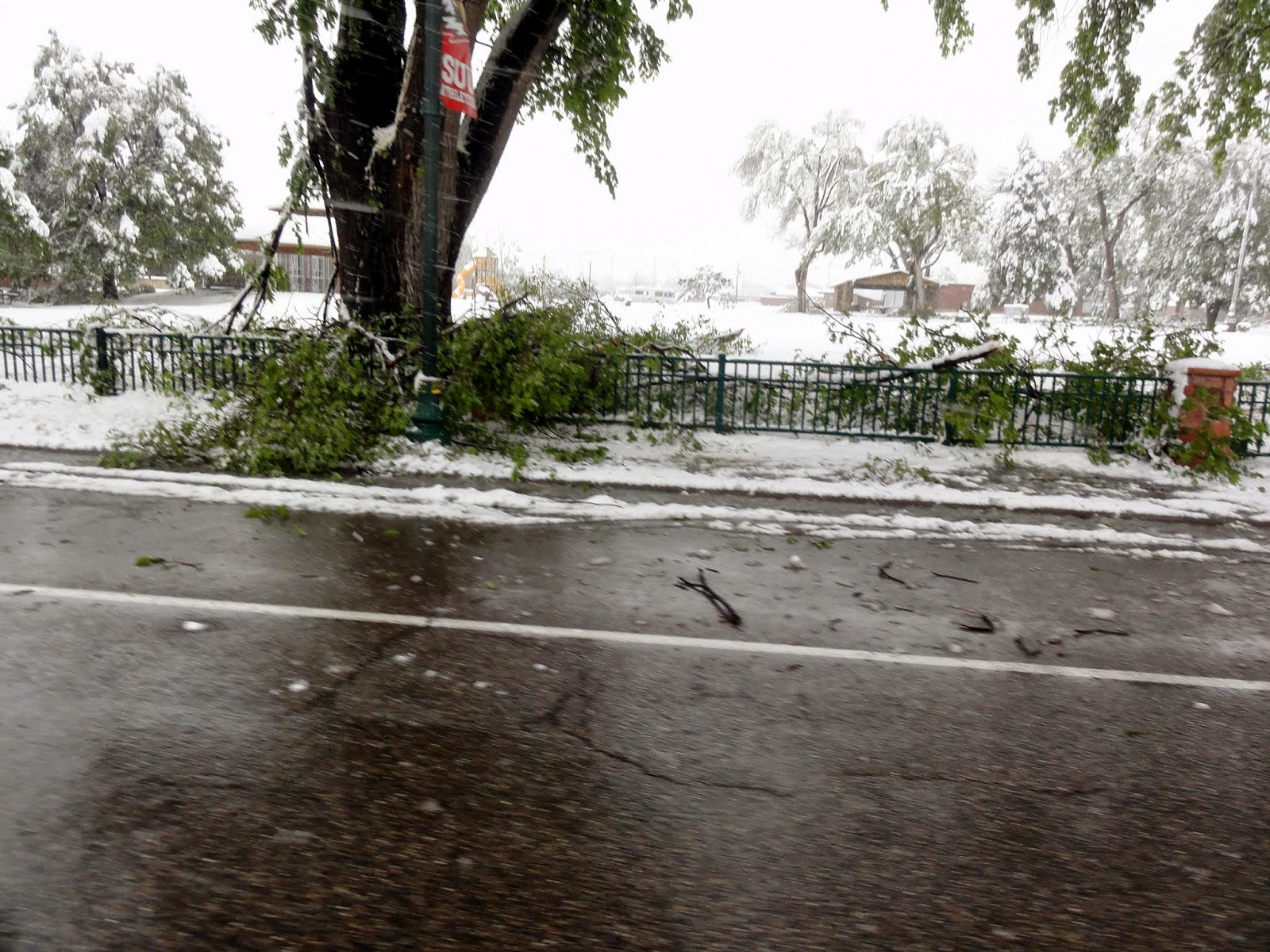 So much for Mother's Day plans for that area.
With electricity out and the sudden cold temps I imagined a lot of  Mother's Days plans were cancelled. 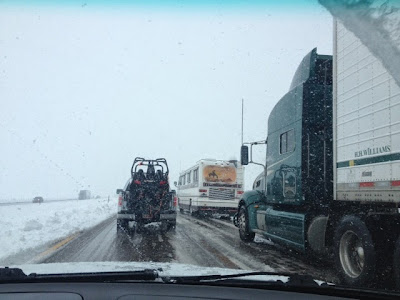 Back on the highway Jeff sent me a text message that the highway was shutting down ahead.
A few moments later we were at a stand still in a sea of traffic. 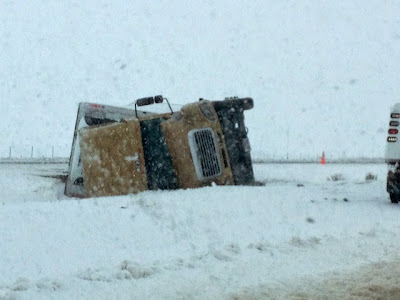 We crept along, traveling only inch by inch for a couple of hours.
Flipped over semis and car collisions, with emergency vehicles trying to get through the snow and blocked roadways had changed our cheer over the snow to deep concern.
I was posting our journey on Facebook, and it was interesting to get replies that friends had family members likewise caught in this same snow storm, now named Winter Storm Zephyr, in Colorado, Idaho and other places. There was a huge area of America that was being impacted by the sudden massive winter storm that seem to have come out of nowhere. 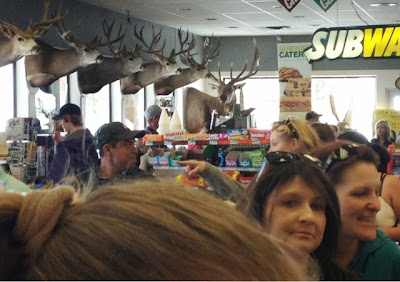 After a couple of hours we were able to turn off the highway and get to a Subway for a very late lunch and a potty stop.
(Do enjoy the fact that Subways in Utah have deer head mounts as part of the decorations.)
Well as you can probably imagine, EVERYONE that had been stuck on the highway for hours in this storm had the same needs as we did..
The line to the ladies room snaked out the front door.
The men's room didn't suffer quite the same que and yes there was a bit of chatter about taking over the guy's bathroom and making them use the snow covered bushes out back.
Bernie over heard on woman in a rhinestone encrusted tee shirt and glittery thong sandals telling everyone one that SHE couldn't believe this, SHE was from CALIFORNIA!
(Big deal sister...so I am, but I sure wouldn't be telling this crowd that nor would I be wearing a rhinestone tee shirt and thongs anyway in this weather.) 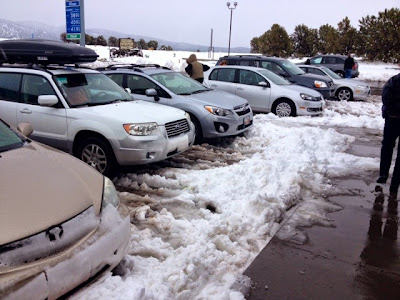 That's our white Subaru with the black camp box on top.
(And you might want to compare gas prices with ours by checking the sign in the background. Those prices are higher than what we usually pay in SLC by the way.)
Once again we were very thankful for our car's all wheel drive that served us well on the snow covered highways.
Shortly after this stop the snow stopped and the rest of the drive home was pretty dry.
I think we were on the road seven hours, maybe eight.
Jeff beat us home by about 90 minutes.
Getting a text message that they were home safe, and then being able to send the same message about us back to him was a real blessing.
We never imagined at trip to Snow Canyon in May would end with us actually in snow!

Posted by Thoughts on Life and Millinery. at 5:51 PM

Crazy weather! It changes from one minute to the next out there! It does make me wonder how the kids beat you by 90 minutes. Wonderful commentary on the pioneer names...it has to be just as you describe.

Now that is a road trip to remember! Glad your Subaru served you well.

I'm smiling at the mounted heads on the Subway wall. Only in Utah!

Just thought I'd tell you I thought about you yesterday and how I could have used one of your hats. The high tea I was at included a parade of hat wearers. You would have been disappointed in me. I had grabbed one out of the kids dress up box and kept it in my purse. I guess I had no sense of adventure.

One never knows in this country, what kind of weather one will find themselves in, and this was a perfect example. What an interesting adventure, and how nice of you to share it with us.