Second babies of the same sex as their older siblings too often get shorted in the baby shower department.
Not so in the case of our Calvin!
Rachel's closest friends made sure that Cal's upcoming birth got properly celebrated. 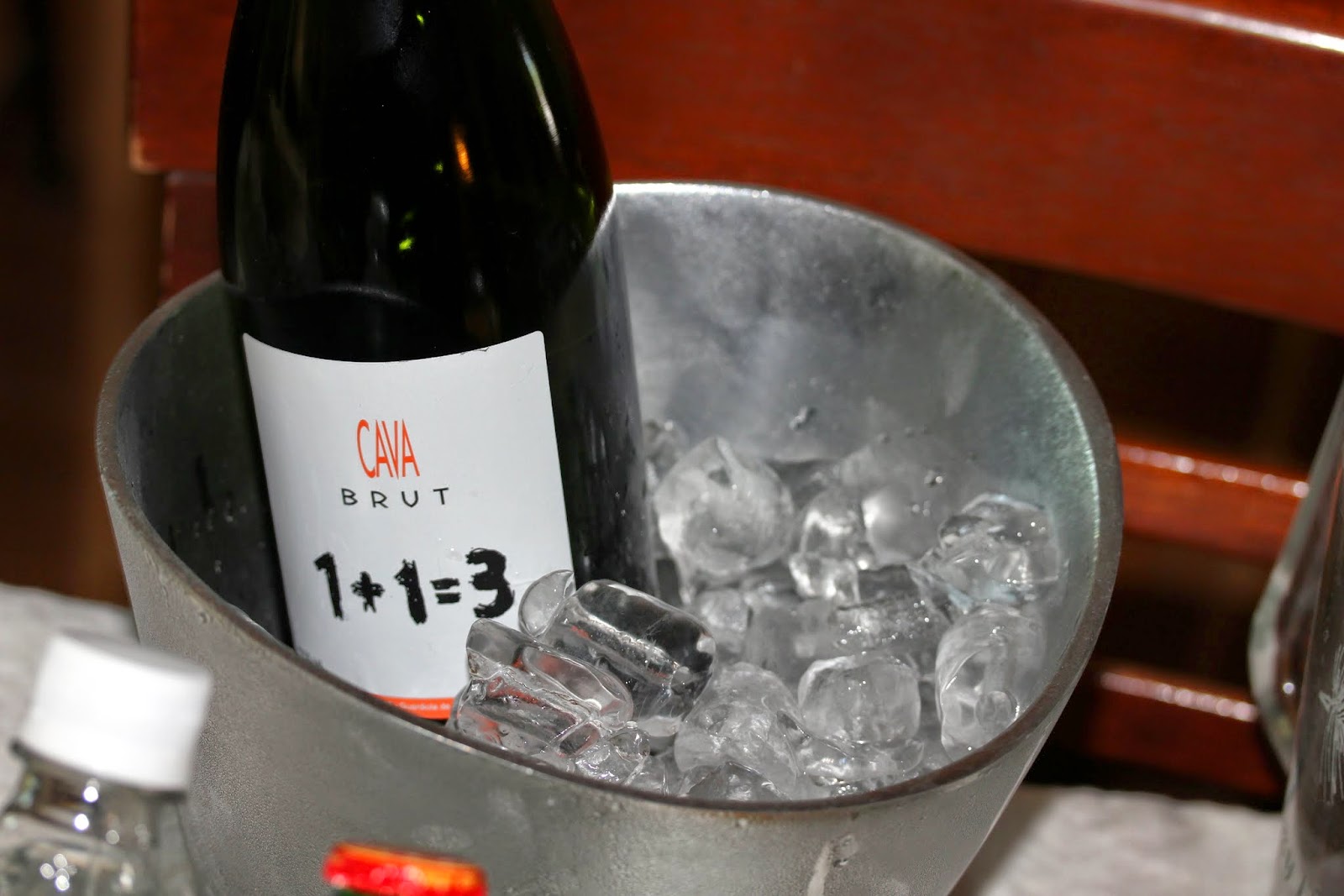 One plus One still equals Three in some situations. 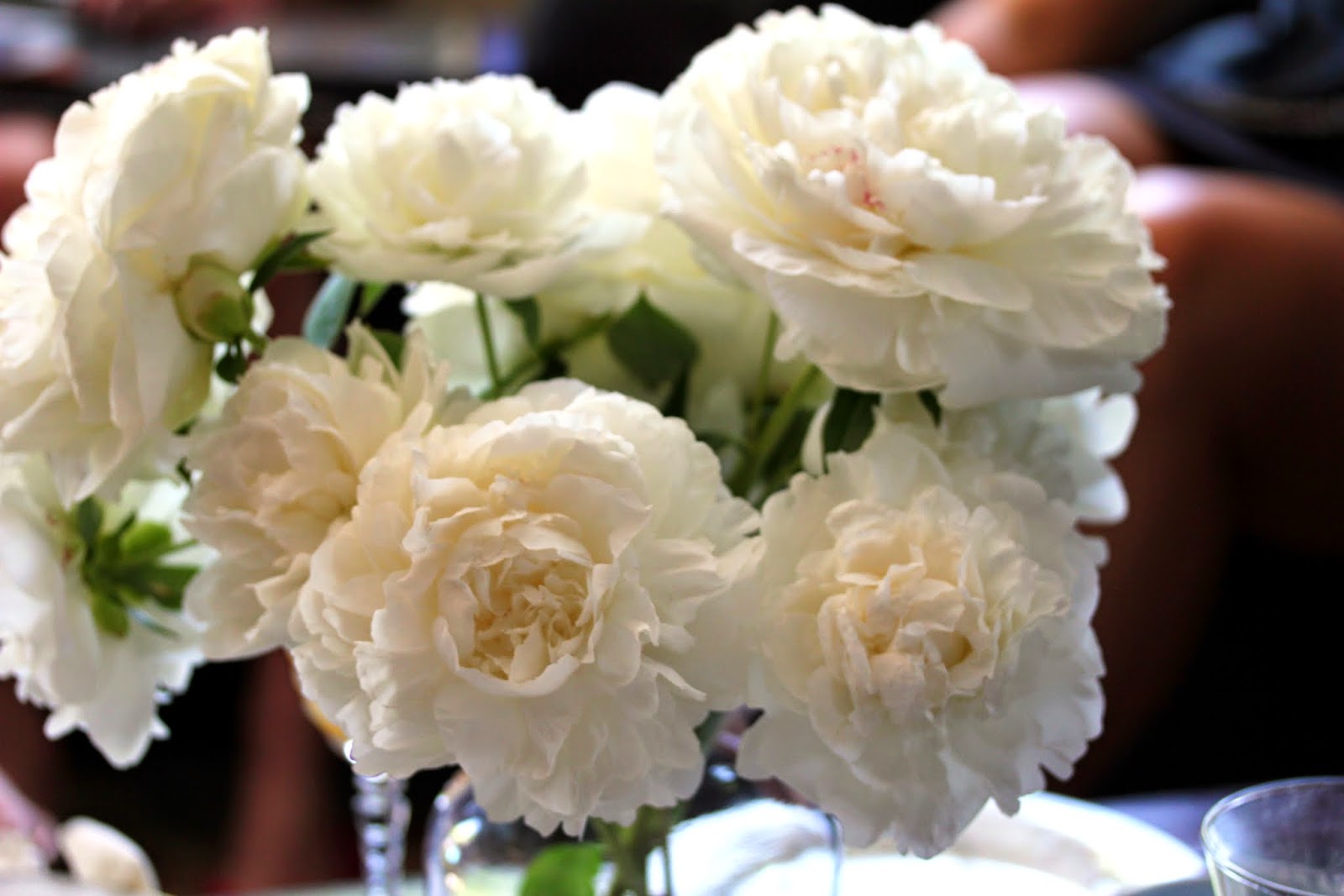 White peony scented the air and were a treat to our eyes at the party. 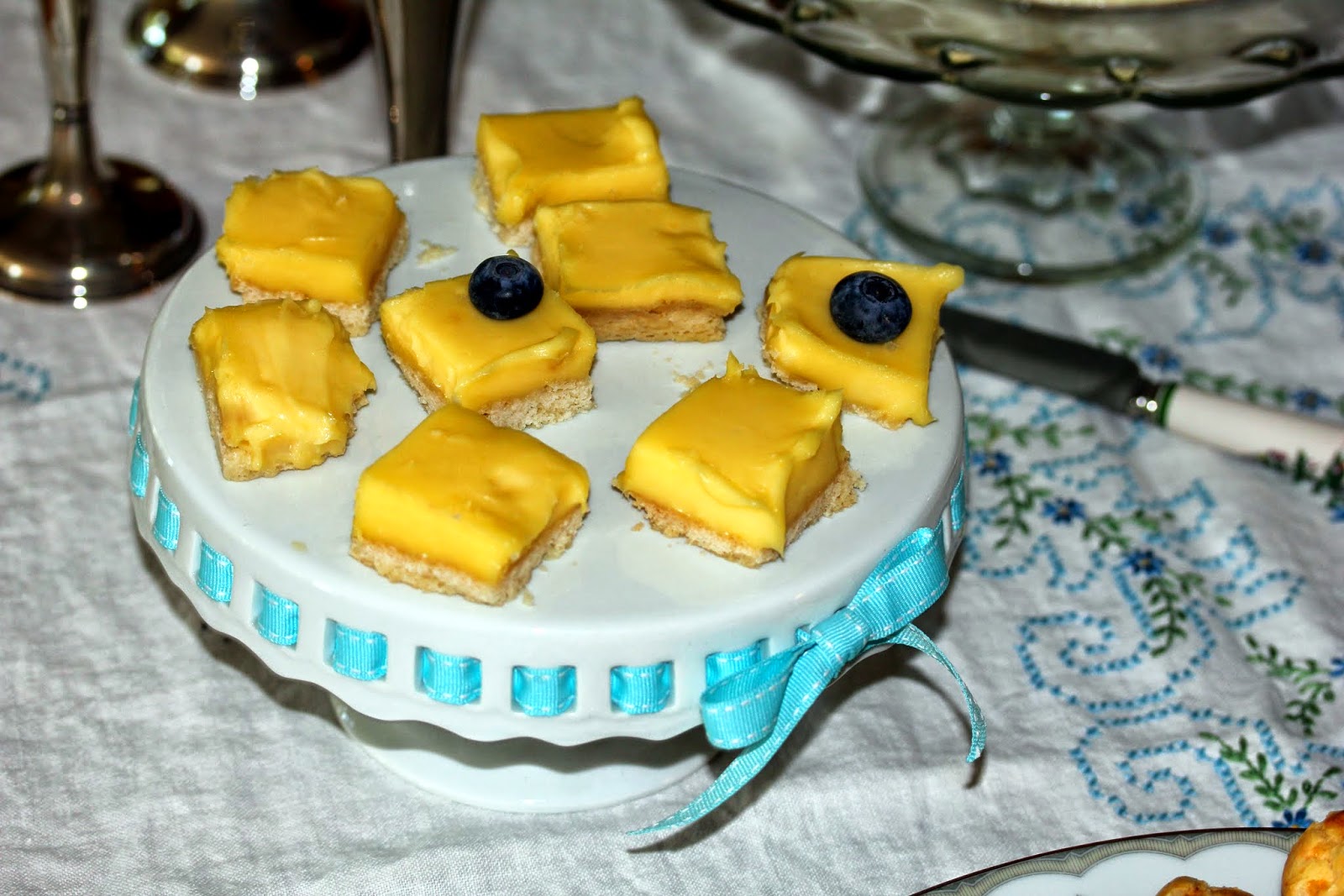 The hostess is a southern belle, relocated to Utah where she practices law,  flies airplanes for fun and teaches skiing in the winter as well.
The party table was spread with her vintage linen  neatly embroidered in baby boy blue.
Her antique milk glass cake stand got a touch of blue as well. 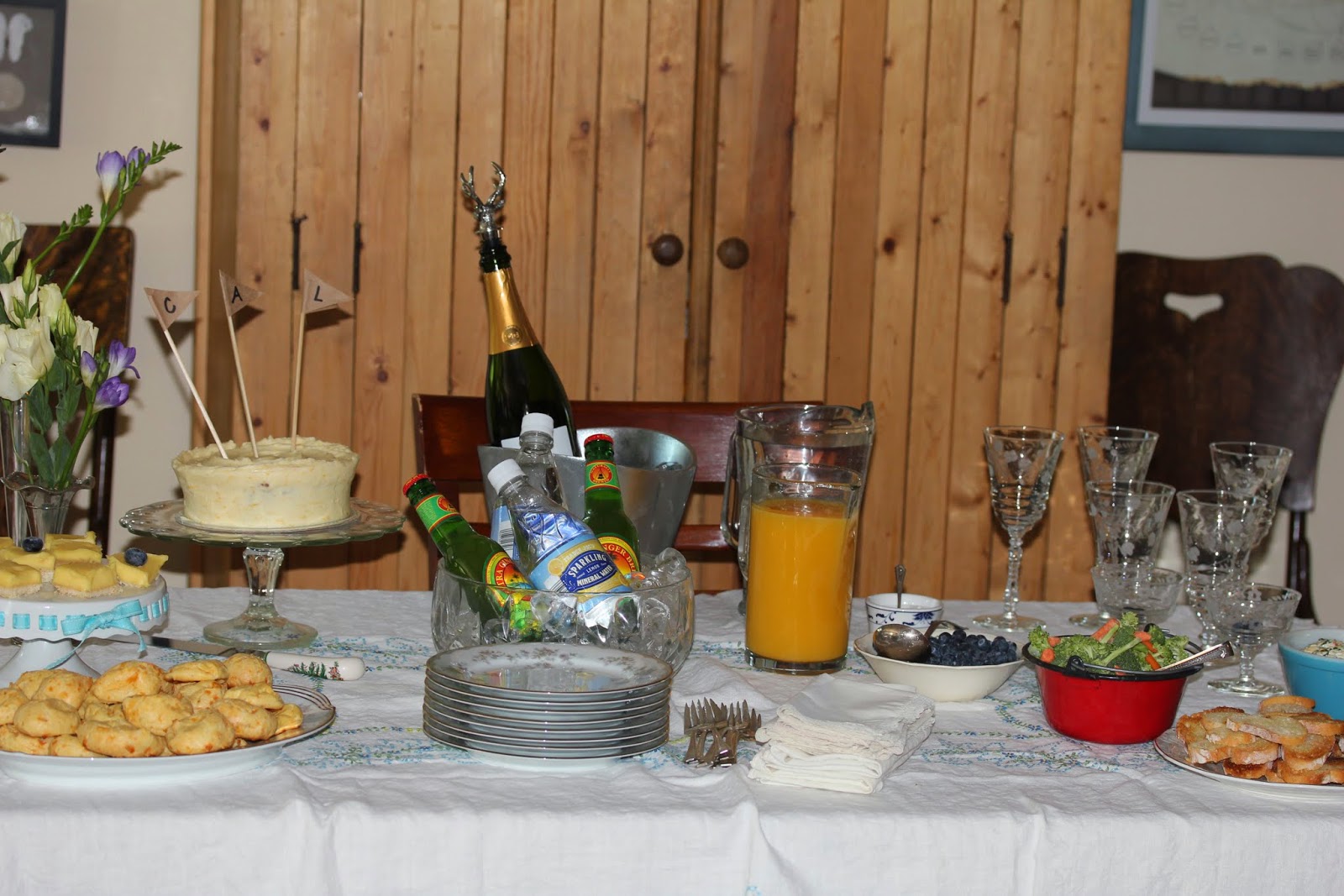 Sparkling white wine was poured over blue berries and served in old fashioned etched crystal stemware.
Eating yummy treats with monogrammed silverware lent a Southern Living vibe to the event.
(Southern girls use their silverware, linen and crystal every day with a casual ease that I wish more people would embrace.) 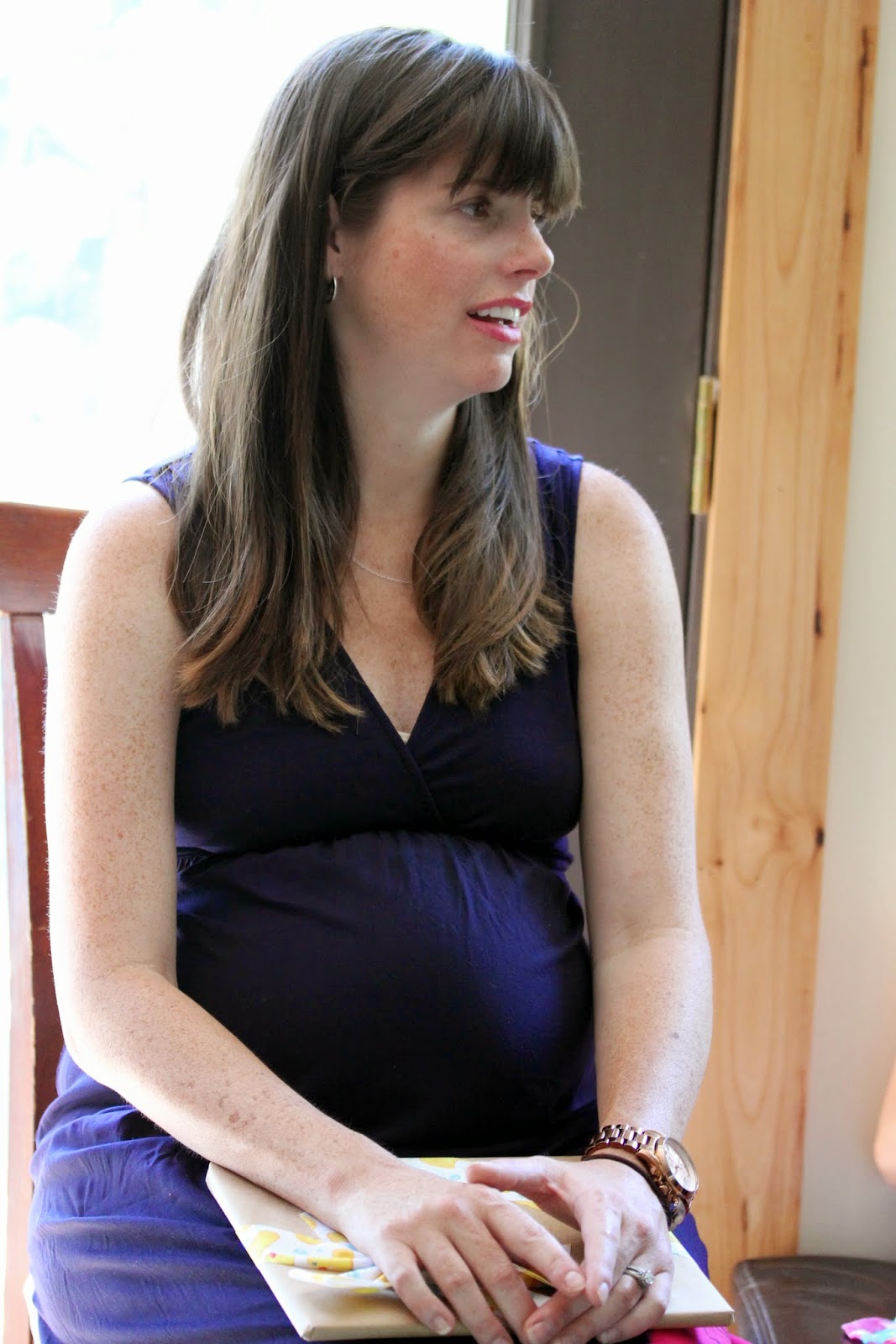 My daughter in law Rachel looked beautiful in blue, just like she does in every other color.
She already proudly speaks of herself as "A mother of two sons."
I think both her boys are quite blessed to have her as their mom! 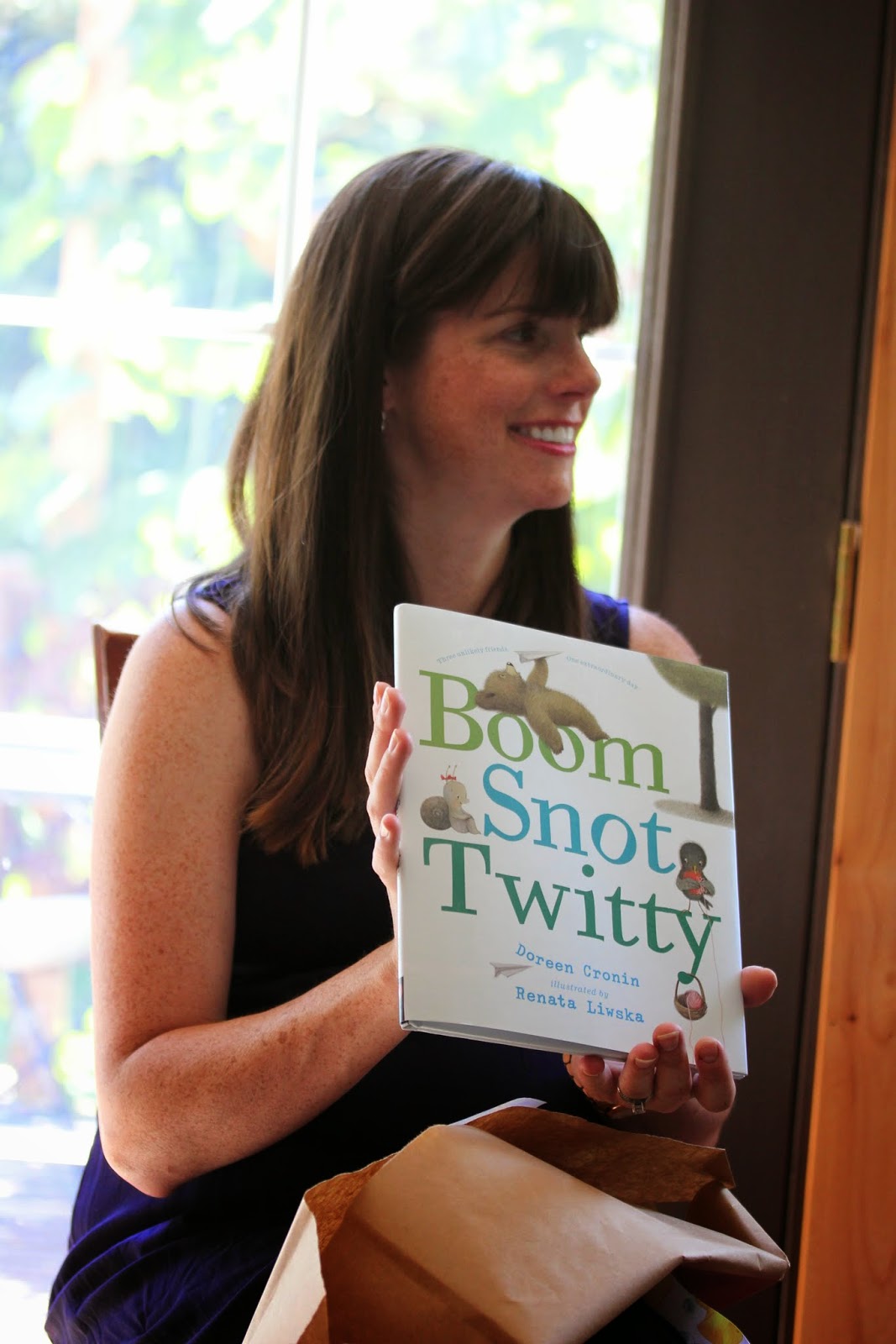 The gifts were fun. 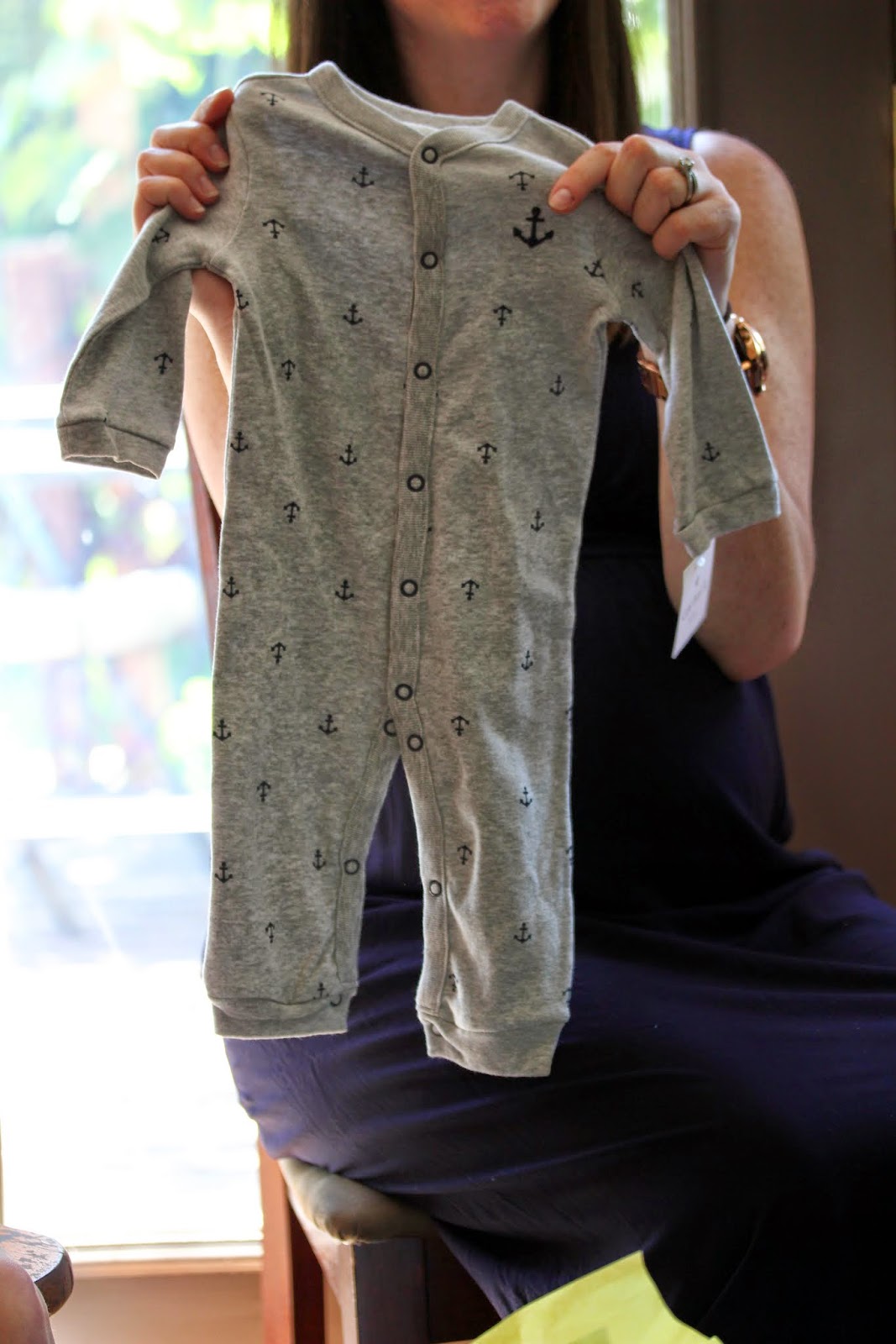 We all somehow felt led to embrace a nautical theme when shopping for baby clothes for Calvin. 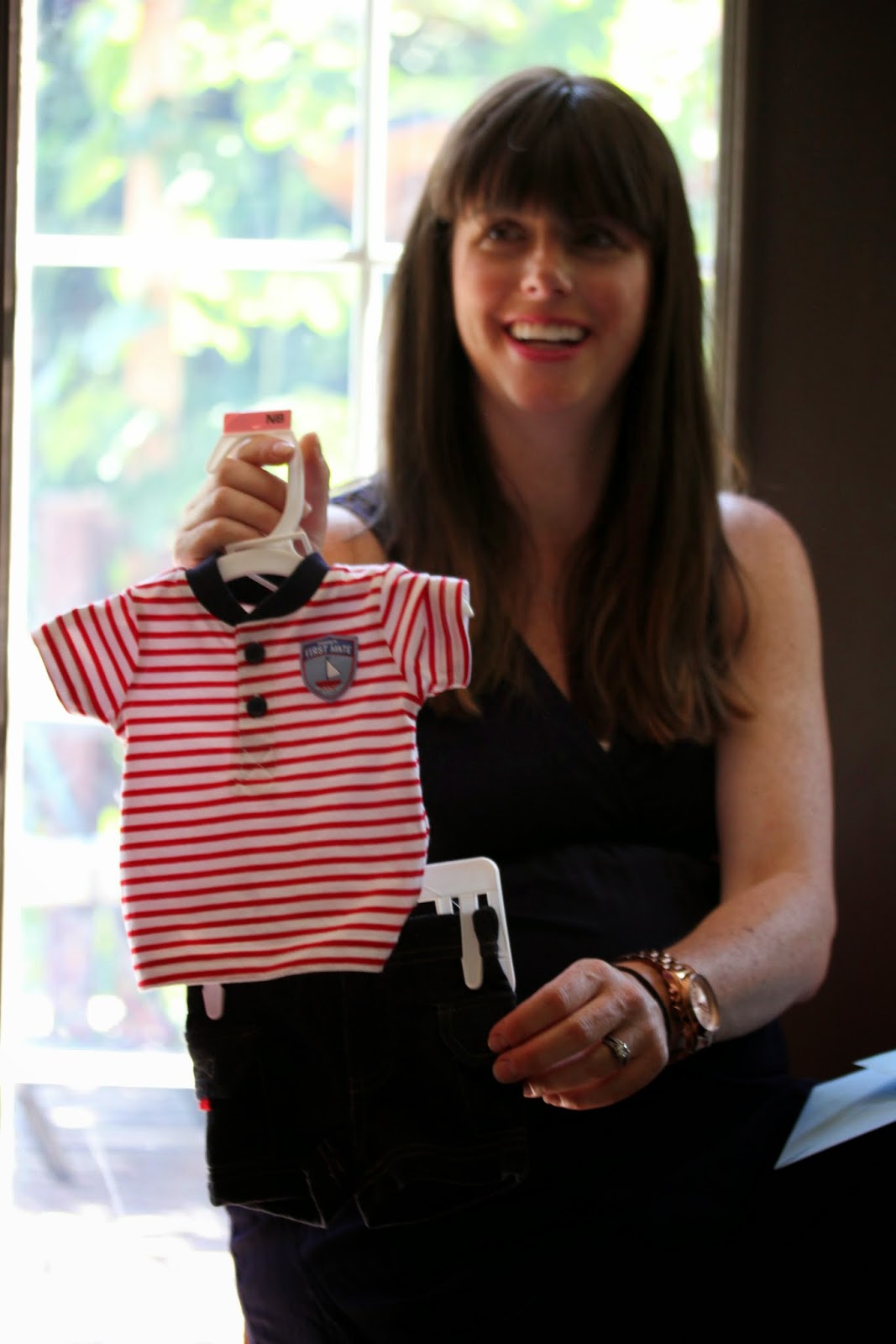 My gift was a red, white and blue "First Mate" shirt and shorts, mindful that Calvin will likely be celebrating his first Independence Day just days after his birth.
Rachel and Jeff traditionally host a blow out 4th of July party each year.
I hope this year the tradition can continue on with the addition of an extra tiny attendee. 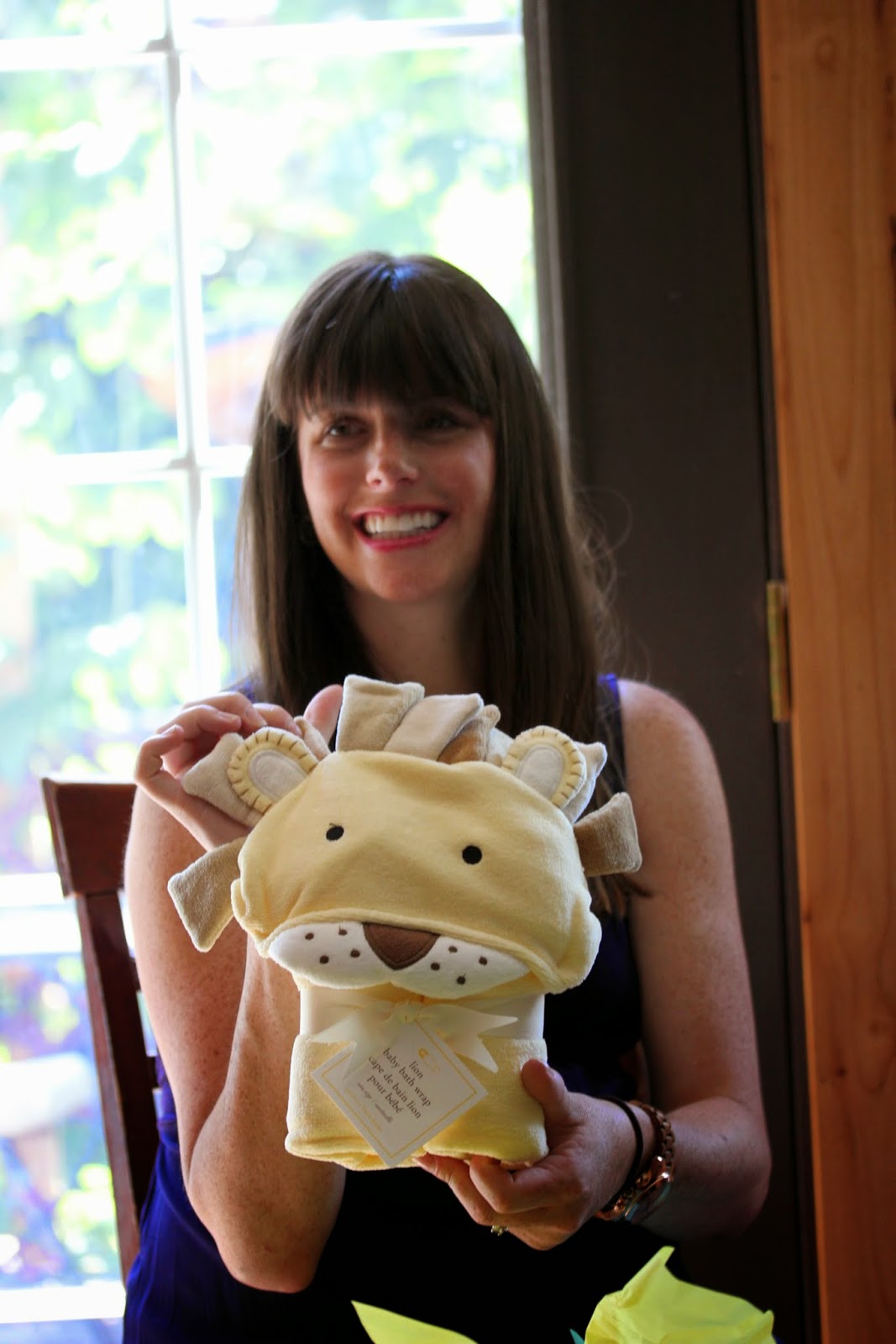 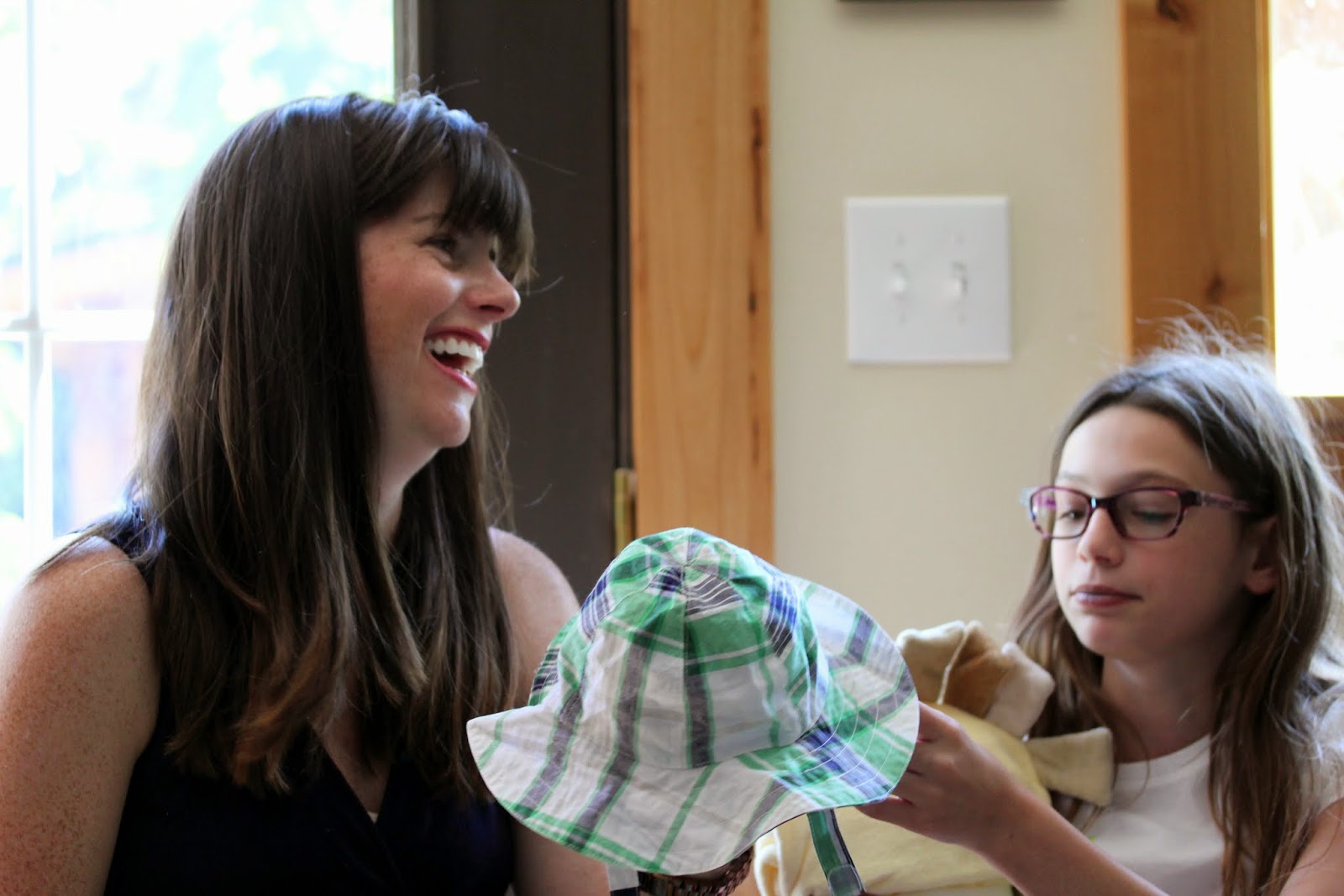 A sun hat that can be reversed to another color pattern to maximize wardrobe co-ordination is a good thing.
Think I wouldn't mind having such a hat myself!
As of today we count just seven more days until Calvin is scheduled to arrive.
I know most babies arrive at times of their own choosing.
Still...it is exciting to think our second grandson will be arriving quite soon.
Stay tuned....I will let you know when he is here of course!

Posted by Thoughts on Life and Millinery. at 5:50 PM

Ahh...so wonderful. What a fun name, too. I'm glad that the celebrations are continuing!

Your daughter-in-law is a beautiful gal...she's one on whom pregnancy looks great, though I am certain she is ready to welcome Cal to the world. Lots of fun gifts and great friends and family.

Aww - that looks like a fun time. What a beautiful mom to be!!! Love that you all unknowingly chose nautical themed things for the baby.....perhaps a peek into his future? Many blessings to your new grand baby!

Exciting times...as you all wait to welcome Cal! It looks like a fun celebration...in honour of the 'soon to arrive' grandson...and his beautiful mamma!

I am so happy for you and your family, on the gift of another little boy. The shower was beautiful and uniquely shared. You are right, your daughter-in-law does look good in blue! Thanks for sharing the shower and the ideas that were used.

Looks like a perfect way to celebrate the coming of Calvin! Champagne over blueberries would be quite lovely I think. It is fun to welcome in a new baby.

Baby showers are so much fun! Around here we only do showers for the first baby, so this little guys is blessed with not only hand me downs but new things as well. I love the idea of using linens and crystal more frequently as well. Oh, and the hat is a good idea! =)