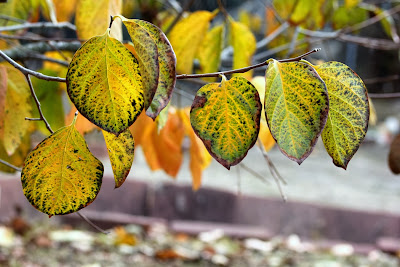 The second day of our San Diego visit dawned sunny and bright, as so often Thanksgiving mornings are wont to do there.
The persimmon tree leaves and fruit lingered on, catching the sunlight and creating small masterpieces thereby. 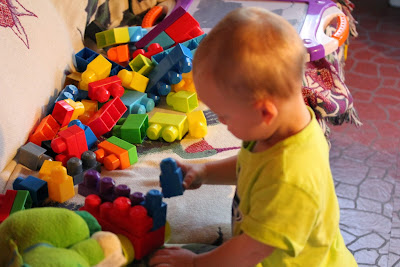 Our son, his wife and their son were also in town, staying with my parents over the holidays.
They joined us at Bernie's Dad's house for the day.
Luke amazed his both his great grandfathers during his visit by constructing complex creations using oversized Legos.
What a 19 month old can do now!
I guess when we were that young we mostly drooled and slept...this latest generation astonishes the eighty+ year old crowd! 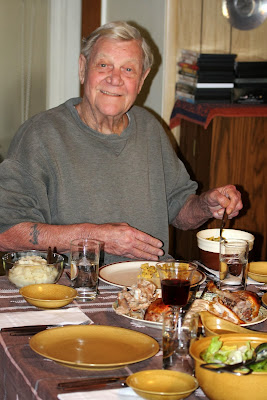 Thanksgiving meal was a combination of ready made store purchased dinner with additional home made pies and side dishes.
(Hal dug right in.)
The house's original stove was used to create its 56th Thanksgiving meal.
I recall the time the same stove once was filled with plastic blocks by Jeff as a two year old.
I learned never to pre-heat an oven without checking inside first after that disaster. 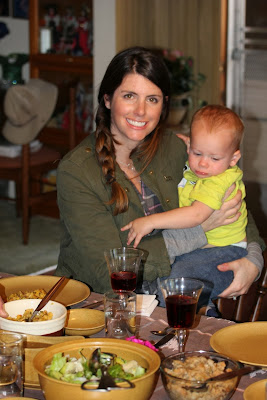 This year Luke enjoyed some table top food.
Last year he was not yet on such solid treats. 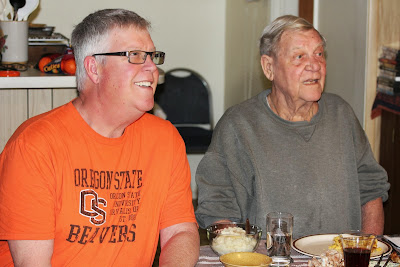 Father and son.
I was in charge of setting the table this year.
Six place settings I carefully placed, each with goblets, only realizing after we sat that there were only five adults there to enjoy.
It has been a year since Bernie's mom Barbara passed away two days after Thanksgiving.
Last year we were a much bigger group, with other grandchildren coming to be near their end-of-life grandmother.
Thanksgiving will always have that memory of loss woven in now.
As well as good memories of  the many years when twenty+ family members would crowd in to serve up food.
Memories of my first Thanksgiving at that house arose.
I was married but 11 months and secretly 8 weeks unexpectedly pregnant.
We had planned to announce the coming baby at Christmas time.
Barbara was working hard in the kitchen as I fought unprecedented prenatal fatigue.
Seeing me rest my head for a moment on the breakfast bar, she smiled and declared "You are pregnant."
Our secret was out.
I think she was the first person to know besides Bernie. 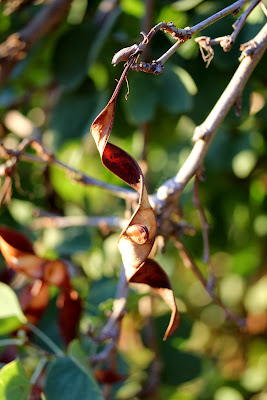 After dinner we took a walk up to a neighborhood playground.
Autumn pods curled, leaves scuffled as we walked and talked.
Bernie shared memories and stories of the neighborhood he grew up in.
We counted front yard cats and Christmas displays as we went along. 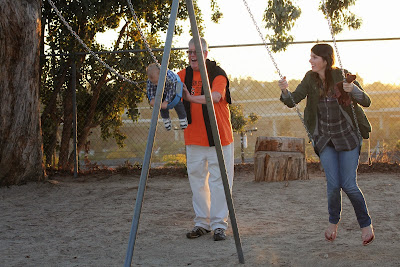 A first, I think.
Maybe a new tradition:
Heading for the swing sets after Thanksgiving dinner. 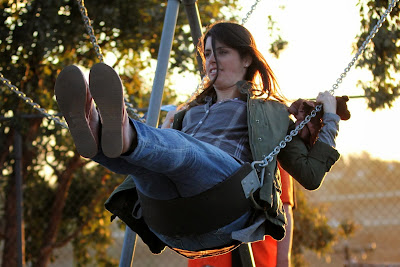 Rachel holds Luke's brown bear as she swings; the bear seems happy to ride along. 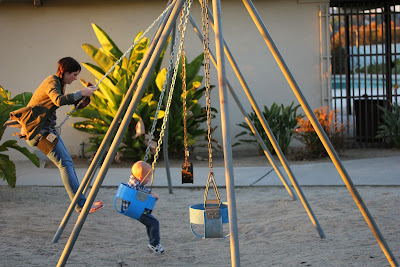 The low sun cast a golden glow upon us all. 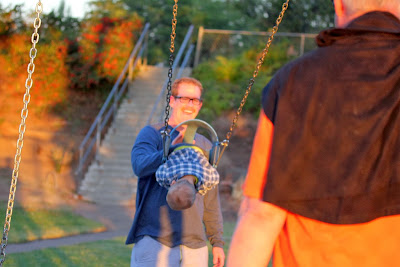 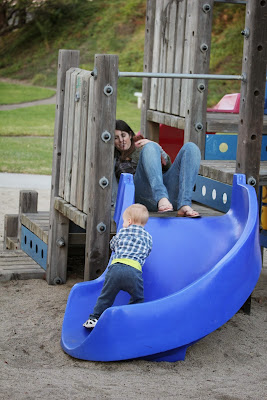 Varying sizes of slides were tested out. 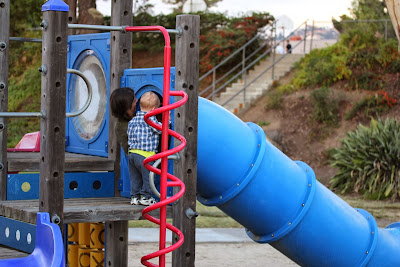 Mom goes down first, to prove it really is fun. 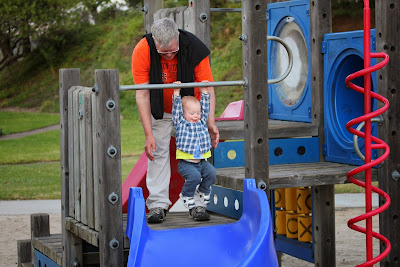 Grandpa Bernie helps Luke do a strong man routine on the bar. 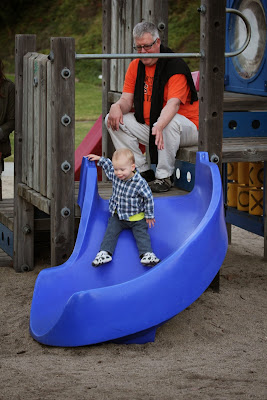 Luke has learned which edge of the slide produces the fast ride. 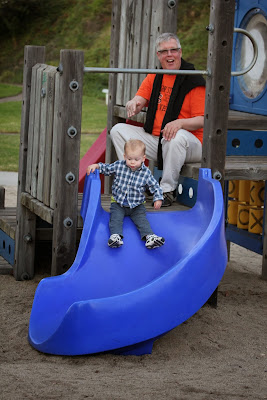 This sort of fun can go on forever, and will last forever in my mind. 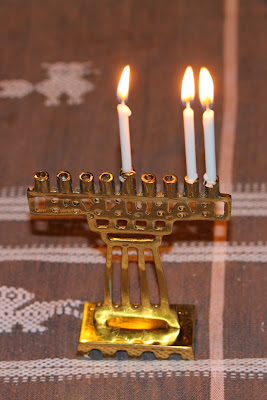 Back home after dark, we lit candles on the small Hannakiah. 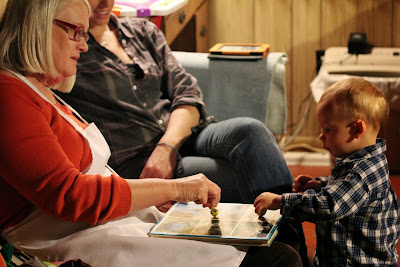 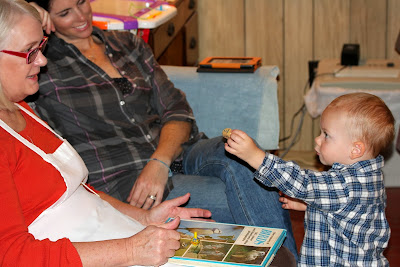 A few more years and it will matter to him upon which side the dreidle falls.
For now, he just wants me to spin the top again. 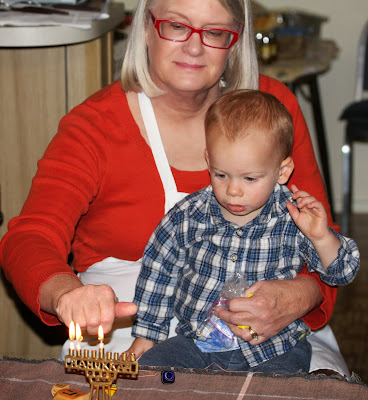 I know there will never be another Hannukah/Thanksgiving Day in my lifetime.
I don't know how many more Thanksgivings Bernie and his family will celebrate together in this house.
Fifty-six times so far.
How many more times in the future?
We know one day the great grandfather will also be gone, and the house will be sold.
One can never knows the timing of what the future holds.
In my mind's eye I see ghosts of family no longer with us; Bernie's grandmothers who used to sit on the couch as their nine great grandchildren scurried and chased about.
I see Bernie's younger brother, arriving late, leaving early, cracking jokes and charming everyone young and old with his wit.
And I see Barbara, as she was once captured in a photograph after Thanksgiving, with pots and pans and dishes piled high in the kitchen, with her exclaiming "I need to clean up the kitchen before I can clean up the kitchen!"

This Thanksgiving together was one more blessing in a long chain of blessings.
I was, and am, thankful for memories of the past and for memories that are still being made.
Posted by Thoughts on Life and Millinery. at 3:04 PM

A beautiful and vivid remembrance. Bittersweet comes to mind...

Thank you for allowing us into your family Thanksgiving and sharing some of what you remember from Thanksgivings past. Wishing you many more beautiful times as your family continues to grow.

Beach time at the end of November? That is hard to imagine right about now. It sounds like another wonderful Thanksgiving...to add to memories of Thanksgiving past!