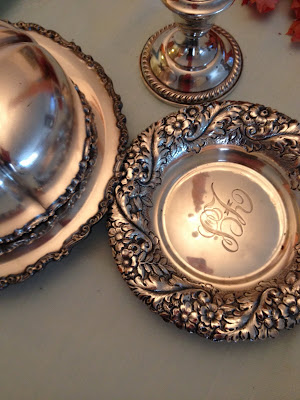 The day after Thanksgiving:
Another celebration, another gathering.
Another table setting, this time with family silver and candlesticks and festive centerpieces.
This time we gather at my parent's house to celebrate my Dad's 90th birthday.
Jeff and Rachel cook a birthday dinner for Dad, relieving my mom (and me!) of kitchen duty.
They are both really great cooks and enjoy planning and preparing meals together. 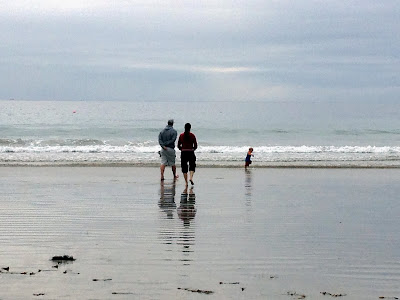 Before the busy kitchen time, a walk to the beach is taken.
The tide is low and the waves very small, perfect for walking about and for letting the toddler have water fun. 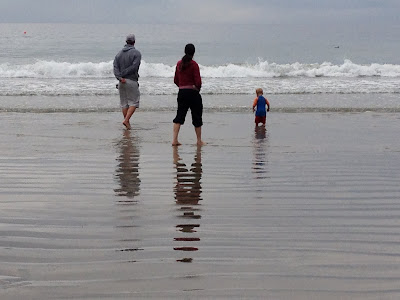 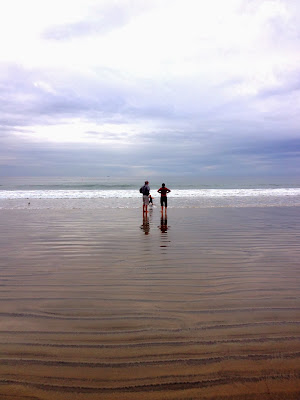 I think we have another generation who will swim and surf with vigor every possible chance he gets. 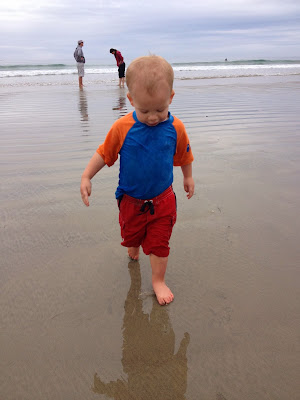 Beach time at the end of November.
The water actually is pretty warm.
Two days later I was in the water too, wading up to my waist...yeah, it was nice. 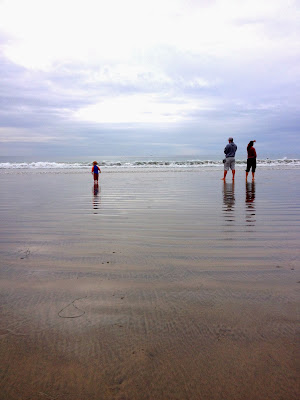 From being carried to the water, held tightly in his father's arms, to now racing in the water apart from his parent's reach.
Blink.
The snapshots of his first and current beach experience testifies how quickly a child grows. 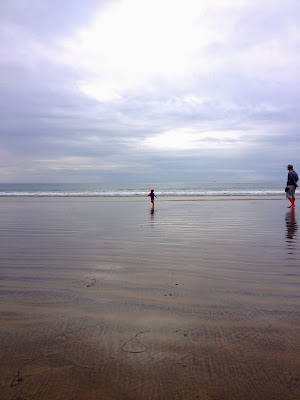 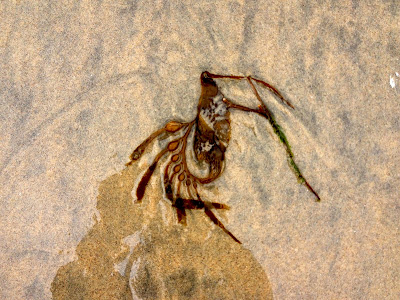 A random strand of kelp has arranged itself as cryptic script on the sand.
Whimsical thought:
Perhaps it is the ocean's message of praise, cast up upon the shore. 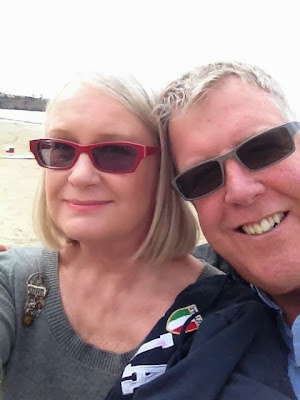 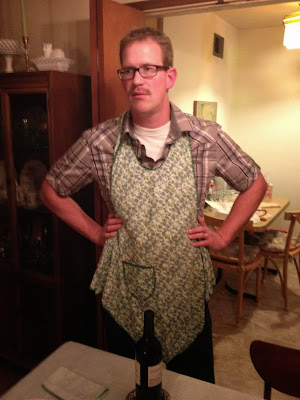 Back at my parent's house, Jeff has slipped on his maternal great grandmother Vida's home made apron.
She passed away when Jeff was about three.
How she would have laughed to have seen him wearing her rick rack trimmed apron now! 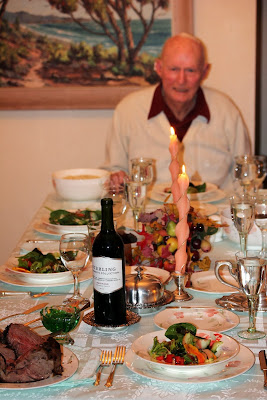 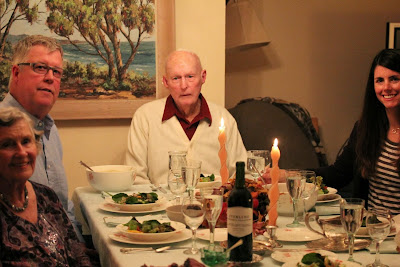 This house never held more than a dozen gathered together for Thanksgiving or any other holiday either.
There was a time when there was a children's table set up near by to hold the four youngest grand children, which always included me. 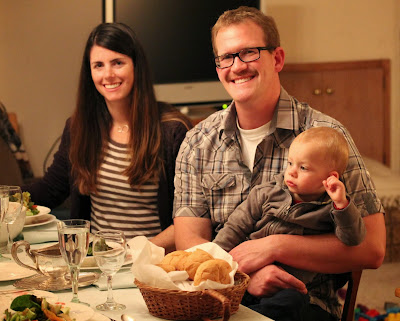 This gathering is for six, plus a rambunctious toddler too young for a chair at either a child's or adult table! 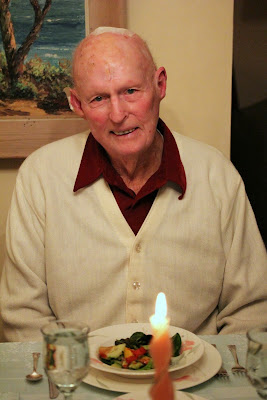 Dad looks dapper at his customary head of the table position.
It has been a tough year for him, and yet he is going strong, albeit with a bandaged ear from the latest skin cancer removal, and a massive skin graft replacing a five inch by three inch surgical removal of his scalp down to the skull.
The graft was a miracle of modern medicine and a very long difficult process to undergo.
He is just now freed of a vacuum pack that has been attached to his head for weeks and weeks.
Reason alone to celebrate! 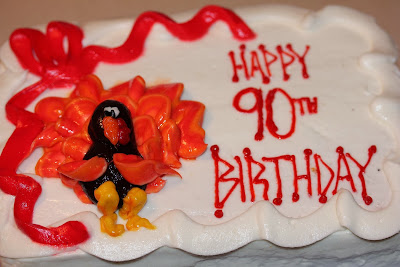 Not really suggesting Dad is a turkey!
It is his choice to routinely celebrate his birthday in conjunction with Thanksgiving.
Long story short-ish:
Dad's actual birthday is December 23.
He had twin older sisters, and during the grim days of the Great Depression, the twins would pool their money to purchase ONE gift between them to give to Dad that was to serve for BOTH his birthday AND Christmas gift.
He, on the other hand, was on the hook for a gift for each twin on their September birthday and two more come Christmas.
Tally:
He got one gift, he gave four.
He rebelled and demanded his birthday be moved up a month in order to at least get two gifts total (one joint gift from the twins for his birthday, and one joint gift from the twins for Christmas) from his sisters.
The childhood ploy has continued up unto this day.
(One twin still lives; she's 93 and lives in Oregon and I think she stiffed him all together this year!) 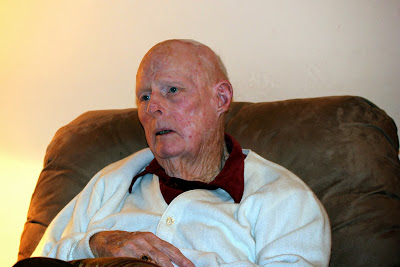 Dad has excellent health aside from the never ending skin cancer battles which has been fought with radiation, chemicals, and mostly with a lots of slicing away of his face.
Rare is the call home that doesn't include a passing remark about yet another place has been found needing surgery.
He reports it all in good humor and thankfulness that the cancer is not a kind that can kill. 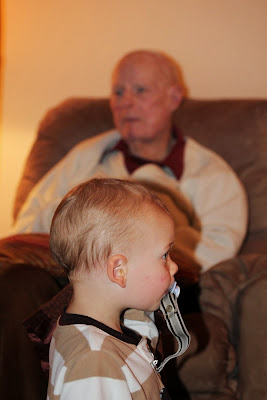 Great Grandpa Dustin and his first great grandchild Luke Dustin.
One is one, one is 90. 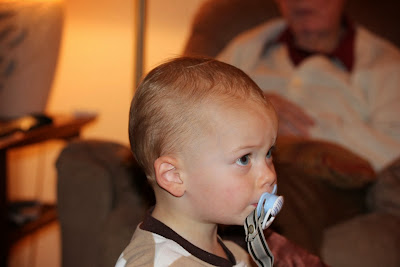 My Dad sees Luke and memories of his childhood arise.
They are mostly unhappy memories; Dad was raised in difficult years and the children of the 20's and 30's were treated harshly.
For a time my Dad lived in an orphanage.
He has memories of things that no child should experience or see.
Dad is astonished at the toys that Luke routinely enjoys, and the attention he receives from all of us.
It wasn't like that for him.
His own paternal grandmother raised him some of the time, with lots of Germanic strictness and little money to be had.
It wasn't an uncommon kind of childhood in that era. 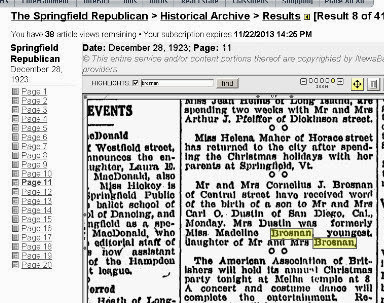 Dad's maternal grandparents lived far away from San Diego, all the way on the east coast in Massachusetts.
Last week I was looking through those grandparent's hometown paper's archives.
There I found the engagement announcement of Dad's parents, and their wedding announcement back in April of 1919.
World War I was being covered in the news along with those two cheery notices.
The couple had wed, gone to visit family in New York and two years later had moved to San Francisco.
I found the Springfield MA newspaper announcement of Dad's twin sister's birth in San Francisco, and later an announcement of my Dad's birth in San Diego as well.
It was the first time Dad's name made the newspaper.
It would by no means be the last!
It made me smile to think of those far away grandparents placing newspaper announcements of the birth of their grandchildren who lived so far away.
Later there was a blurry photo of their daughter posing with her twin girls and "Dexter", my Dad's middle name.
He was about four and dressed in a sailor suit.
Who knew back then that one day that same child would grow up to wear a real sailor suit and fight in another world war.
Seeing those announcements told me that those far away grandparents cared.
It was nice to know after all these years. 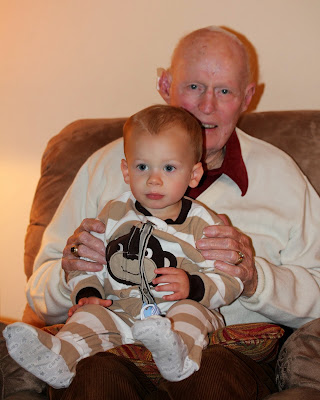 We take pictures of the oldest and youngest family member together. 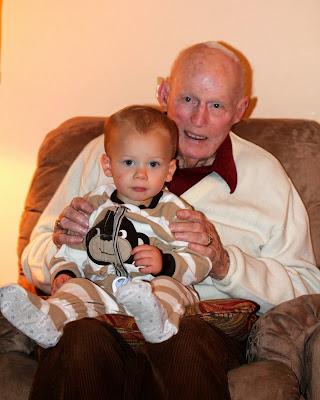 I regret not set up my camera with a bounce flash, and taking technically better picture. 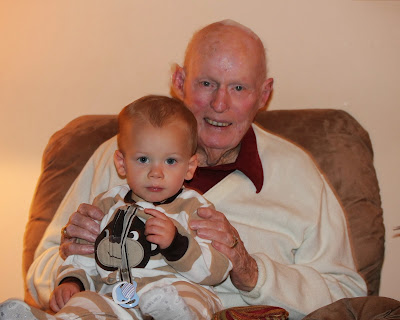 On the other hand...sometimes pictures just have to be taken as quickly as a baby will allow. 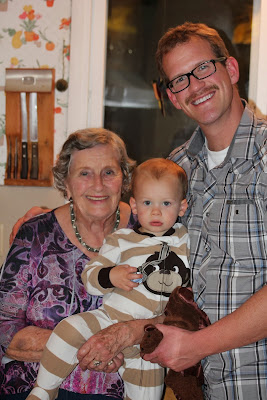 Great grandma Dustin gets her picture taken too, quickly, in the kitchen, as Luke is just about done for the night.
Jeff seems so tall next to mom! 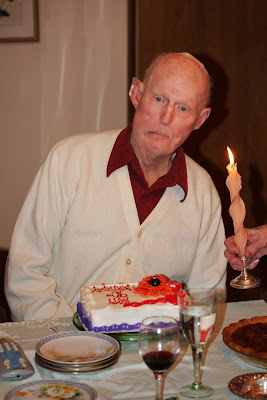 We took a break after dinner to watch a ball game played by Dad's and Jeff's college, San Diego State University.
The tv remote rests next to the dessert plates...the game is still going.
I had thought about buying a 9 and a 0 candle, but didn't.
90 singles candles?
How about one really big candle instead?
Dad clowns around, pretending to be a befuddled 90 year old trying to blow out a candle.
(I find it quite funny how my aunt expressed her disdain for eating dinner with the "old" people in her retirement/care center home.  Just try telling her that at 93 she is by definition "old" herself!) 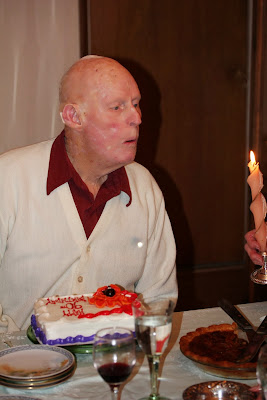 Not even a guess what one would wish for at age 90. 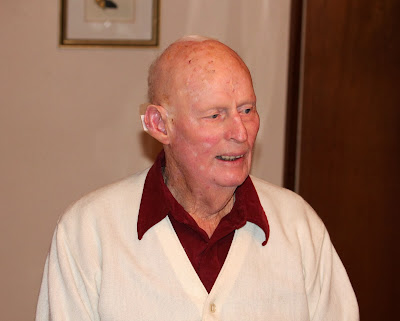 What ever it was, he seemed pleased. 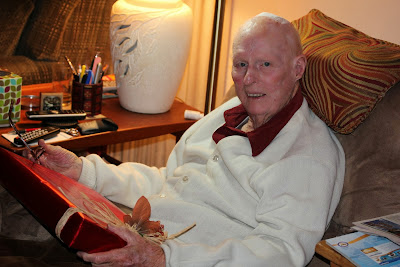 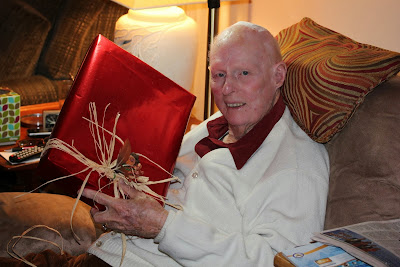 His gift: a long red plaid flannel robe, long enough to cover him down to his ankles when he sits in his recliner.
He also gets a pair of shearling slippers.
And a wild purple tie to wear with the purple wig he speaks of purchasing to wear in the future to cover his now ravished scalp.
That should be quite a look.
My Dad has never hesitated to stand out in a crowd.
While we waited for dinner, Mom handed me the latest newspaper write up on my Dad.
Dad is in a local newspaper article again, this time about the latest chapter his long life.
He has had an interesting life.
He may be (kinda of) 90 (we may be sending birthday greetings again on Dec. 23...) but he is still engaged in living an active life, making headlines, and getting the most out of life.
Posted by Thoughts on Life and Millinery. at 6:36 PM

Your dad is really a handsome man. He is making nearly 90 look great. What a lot he has been through and what a remarkable amount of grace in coping with it. How wonderful that you all could be together to help celebrate.

Wow - your Dad is amazing at 90!! Looks like you all had a great party and that little one who's one is so adorable!
I love the random kelp picture - it looks like ancient jewellery!
Have a great week!

I find it ironic that your dad was sent to Idaho In WWII and my dad, in CT was sent to San Diego!!! But that is a nice article about him and his D.C. trip.
S.

Wonderful photos, Jill. Love so many of them. The one of you and Bernie is great. The celebration table looks so nice. It's great that you could all join together. The apron shot is fabulous!!
Lots of fun history, too.