I am joining Vee's monthly note card party!
Be sure to check all the links to note cards on her blog too!
Who can resist a rainbow?
Not me! 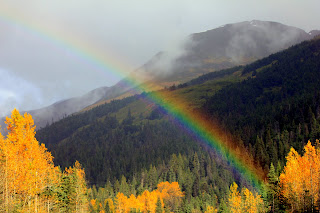 Rainbows arched before me up against the wild Autumn brightness in Alaska's Kenai in a post I did in September 2012. 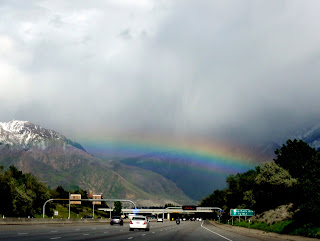 Another time a rainbow danced over the freeway between snowy peaks as I was running errands around town. 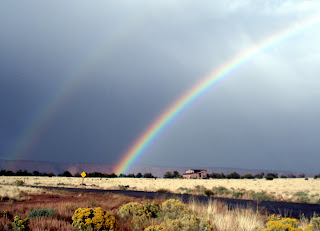 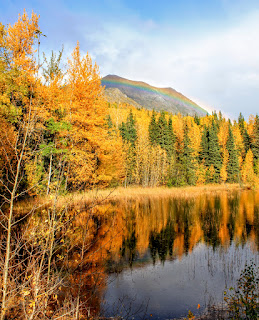 I was the one who danced when I saw an autumn rainbow resting on an Alaskan mountain top and then saw it also reflected in the pond below, which I wrote about in the same post as the other Alaskan rainbow.
Oh rainbows!
Most people know about the story in the Bible of the Ark and the flooding and the rainbow that God put into the sky as a sign of covenant that He would never again flood the earth and destroy it in that manner.
A few years back I learned a bit more about rainbows.
I learned that the middle color in a bow is always green...as in  Emerald green.
In heaven there is a rainbow as well.
It is an Emerald bow,  and it arches around God's throne.
Rev. 4:2-3, 5-6.


The  double rainbow likewise tells a story.
The royal purple is the top color of the top rainbow, and the bottom color is red.
The closer to earth bow tops in red and ends in purple.
The red band...blood red...marks the boundary between the two.
Each person sees a unique rainbow; the rainbow is created by the light being split by raindrops.
Each person's eyes sees the rainbow created from exactly where they stand.
Seven colors make up a rainbow.
Seven days were used to create the world.
One Jewish sage remarked that with the flood, God took aim with His Bow at His Creation to destroy.
When He made a rainbow, He placed the bow arched so that it aimed away from the Earth.
The emerald bow, a circle, around His Throne, is the ultimate rainbow I really long to see. 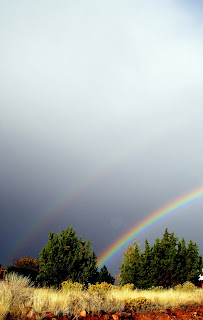 Posted by Thoughts on Life and Millinery. at 12:01 PM

Oh how beautiful! Rainbows in autumn foliage is exquisite. I also learned a few things...had never thought of the rainbow being complete in Heaven. That seven day analogy features prominently throughout The Word, doesn't it?!

Fantastic rainbow pics! I was amazed to see a rainbow arch directly over the bridge I was crossing on the way home one night... Could you imagine the traffic jam if I stopped for that pic:@)

Sooooo beautiful! I learned a lot about rainbows here. Thanks for sharing your fantastic note cards.

Brenda @ Its A Beautiful Life said...

These photos are absolutely gorgeous and would make beautiful notecards! I love the history of rainbows in scripture but didn't know they are seen as a circle above the earth. God is so majestic isn't He? Blessings, Pamela

You captured amazing images of rainbows! The first one is amazing!

You have captured the beautiful essence of the rainbow, I learned so much about the rainbow, thank you for sharing your photos and thoughts. Such a blessing for me.
Sue

What beautiful rainbows, lovely scenery too!

I enjoyed seeing the beautiful rainbows. Always reminds me of God's promise.

What a treat to see some photos from beautiful Utah! (And I had to laugh when I saw your barn board background since I have a board background too.) These are quite lovely and I learned out rainbows too!

I think "wow" pretty much sums it up for these photos. So lovely.

Rainbows hold so much meaning. And they are so beautiful. The one captured on the top of the mountain and then reflected in the lake is stunning.

Gorgeous rainbows. I enjoyed reading about them too, thanks for sharing.

Hello Jill
Rainbows are always special and these make a wonderful set of note cards.
Your photo of the Autumn trees on the edge of the lake is "drop dead gorgeous"!
You must print these off and send them to your family and friends!!
Have a wonderful weekend
hugs
Shane