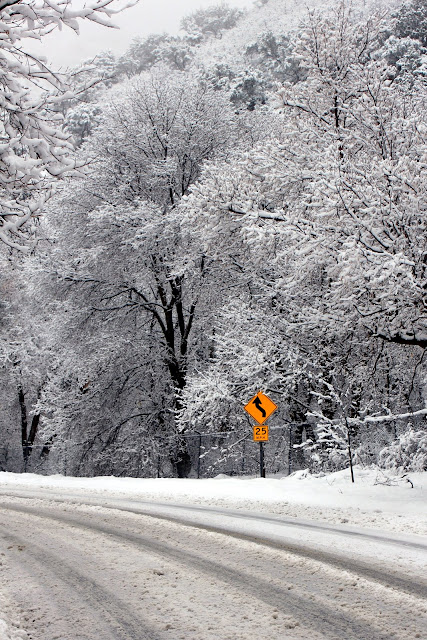 A heavy snowfall performed a white-out function in our world yesterday.
As we drove around a bend, a sign blasted colorfully at us, warning of curves ahead. 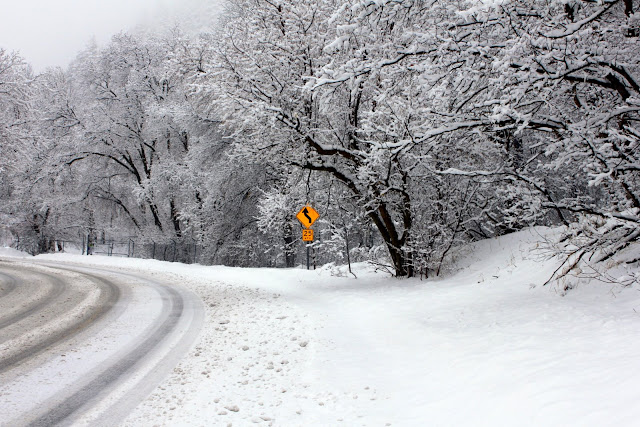 Each curve was posted; it wasn't hard to notice the warning when it was against such a colorless backdrop. 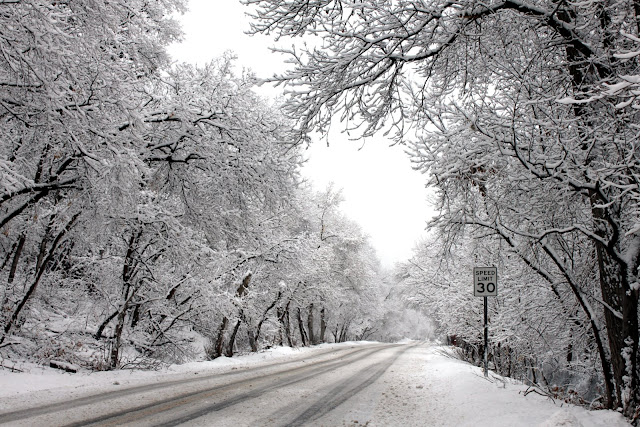 The speed limit sign was harder to see... and it advised a speed that was faster than advisable for the situation. 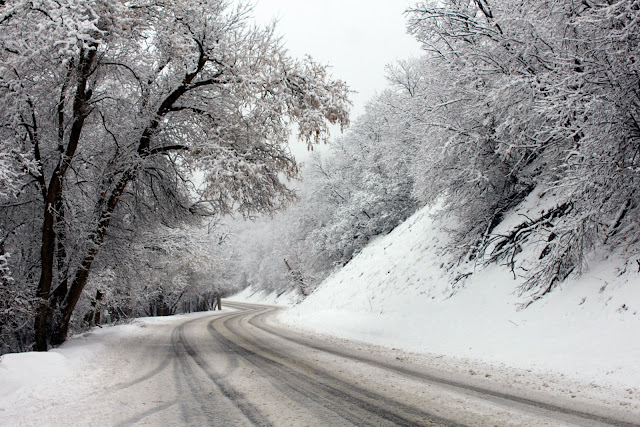 Slowing down was wise both for safety and scenic appreciation. 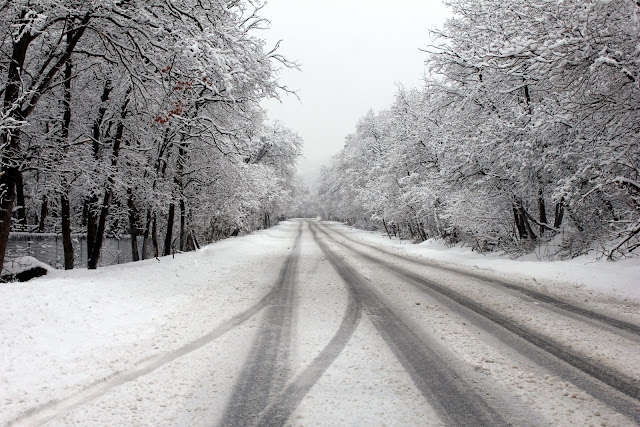 Coming upon a place to pull over was a bonus for picture taking. 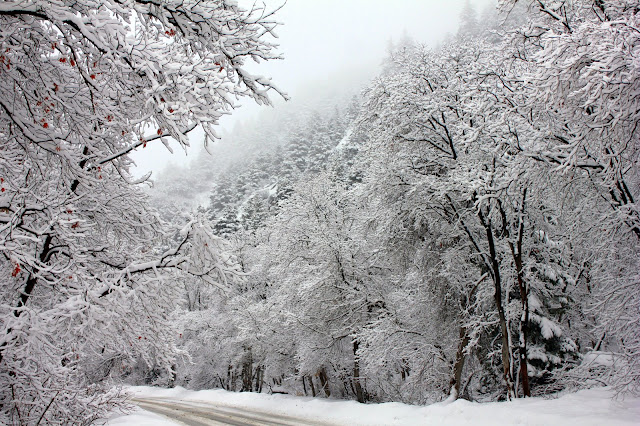 Most of the roadway was so snow banked as to make stopping an ill-advised plan. When we did stop, I found beauty everywhere I looked.
I looked all around me.
I looked up... 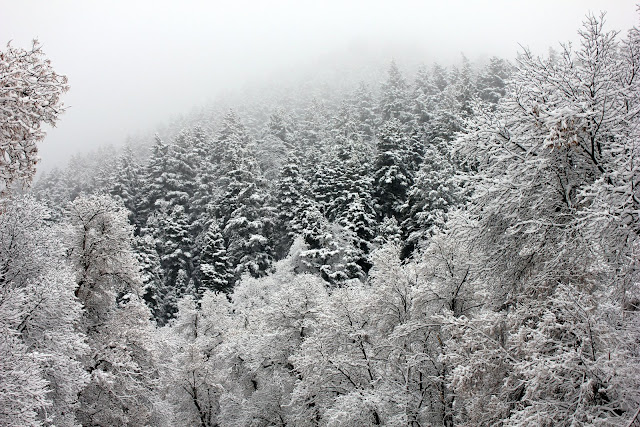 The furthest views on high were shrouded with snowy fog. 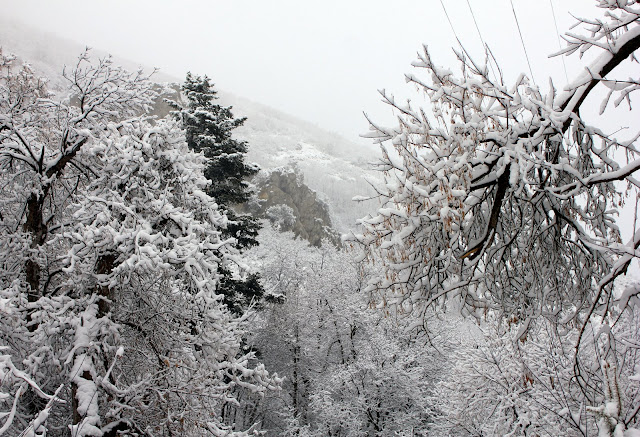 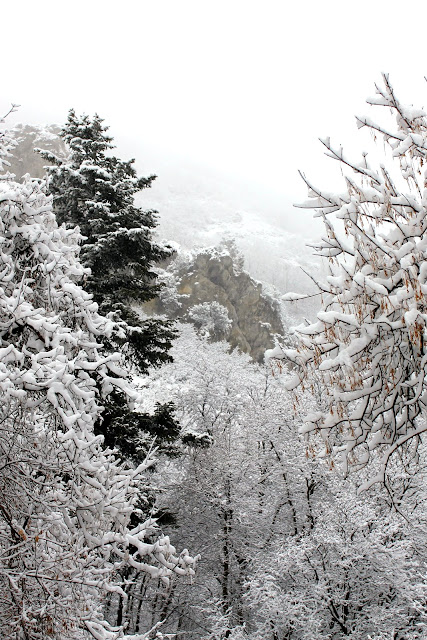 I was using a tripod and a prime lens; both seem limiting to me as I couldn't just swing my camera around freely as I do when I am doing hand held shooting.

The prime lens allowed no zoom.

The trade off:  learning to take the time to set up a shot, and then getting the shot in crystal focus. 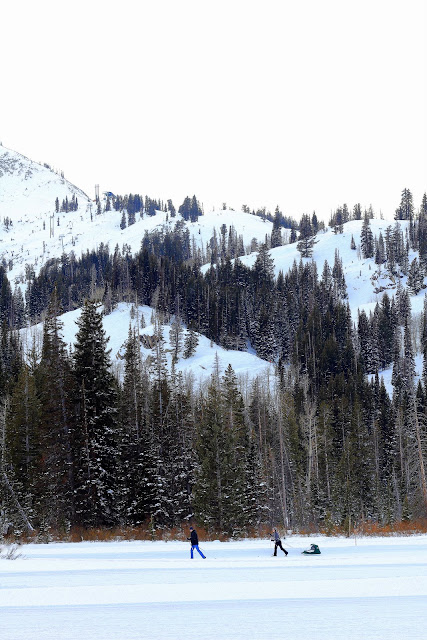 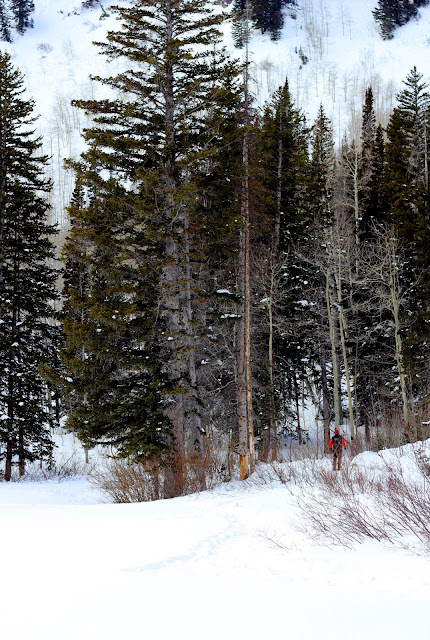 Sometimes the paths are flat and one can see quite far ahead. Other parts of life seem to have warning of curves ahead.   Then there are times when you are headed into woods that seemingly have no signs or warnings at all.

(I was on snowshoes here, walking around a frozen snow covered lake while Bernie cross country skied a different trail.)

All this snow...yet just two days earlier I found another sign of sort.

I had been walking through a garden, a winter frozen dull place.
The bare branches and bare flower beds offered little visual beauty to me.

As I rounded a curve on an up hill path...thinking that the walk had yielded nothing of interest... 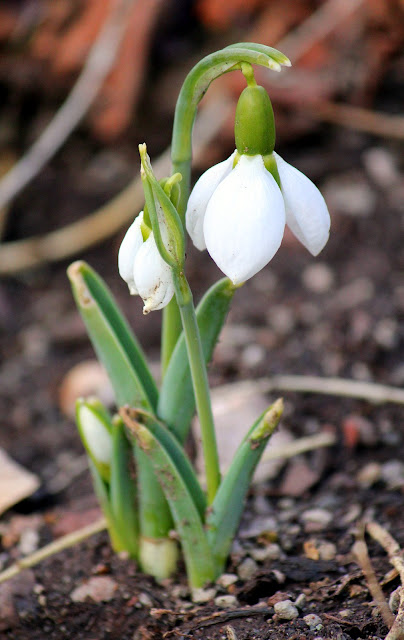 I found another sign.
The first blooms of winter.
The snowdrop! 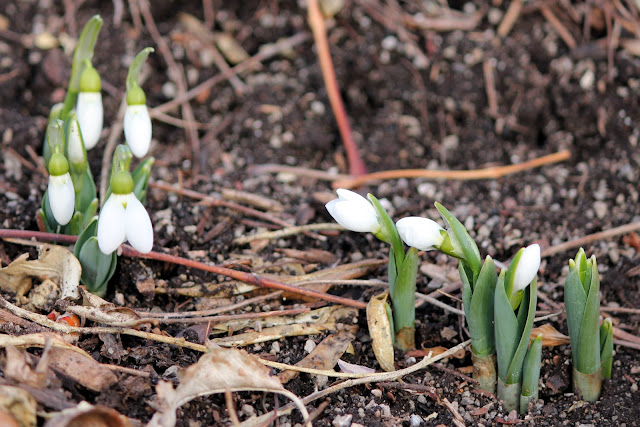 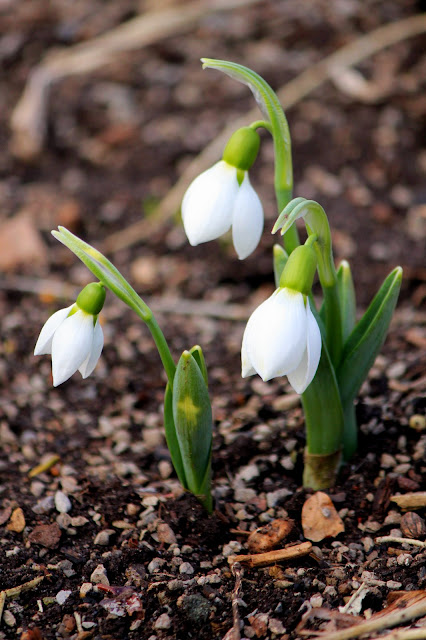 I sprawled flat on the path to nudge my camera close, then closer to commune with their bowed headed beauty. 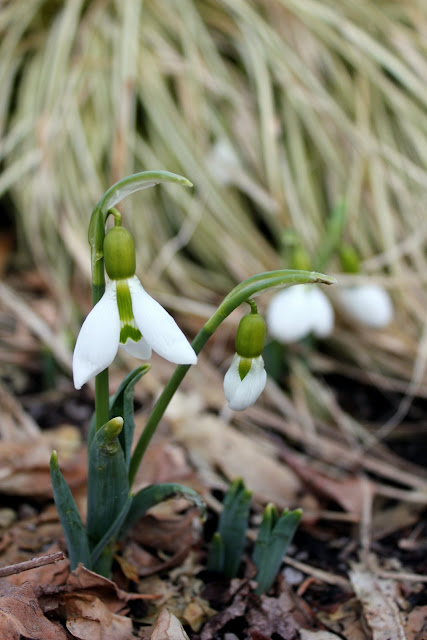 Up close...I saw an early Valentine!  A green heart, hidden away, turned upside down.
Perhaps the heart was a Valentine meant to be seen only from the view of the earth while looking heavenward? 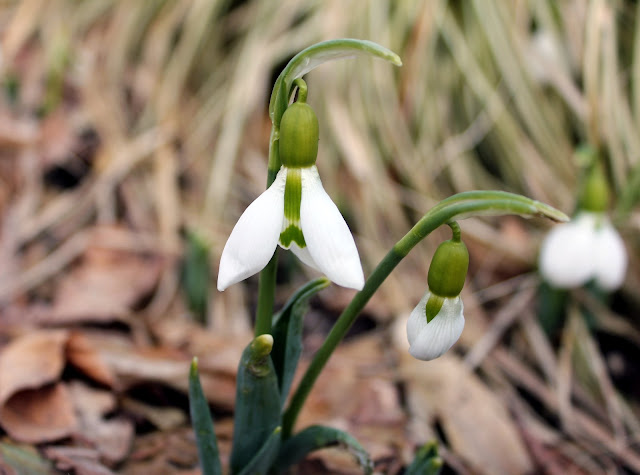 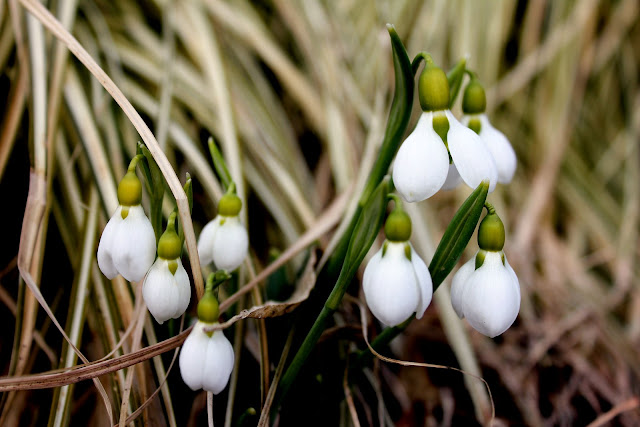 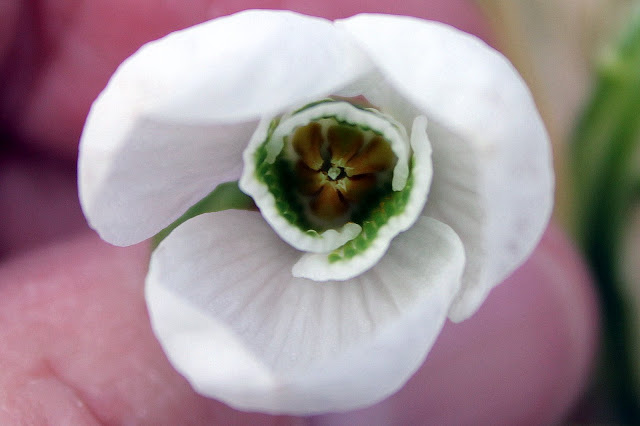 Lifting a blossom, I peeked inside.
How secret, how tiny is this winter braving bloom! 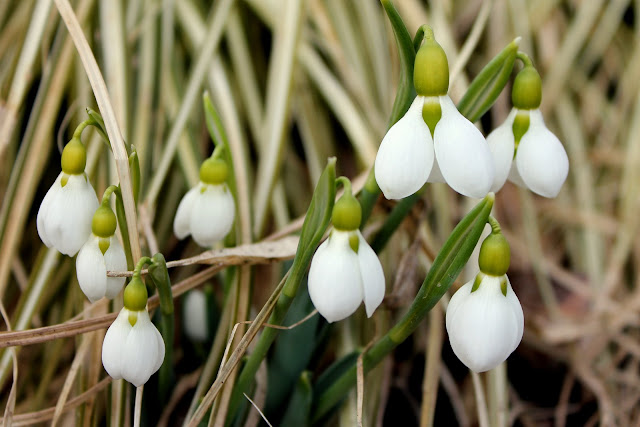 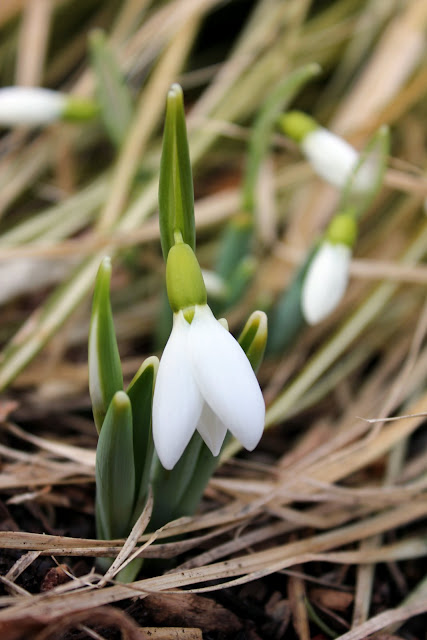 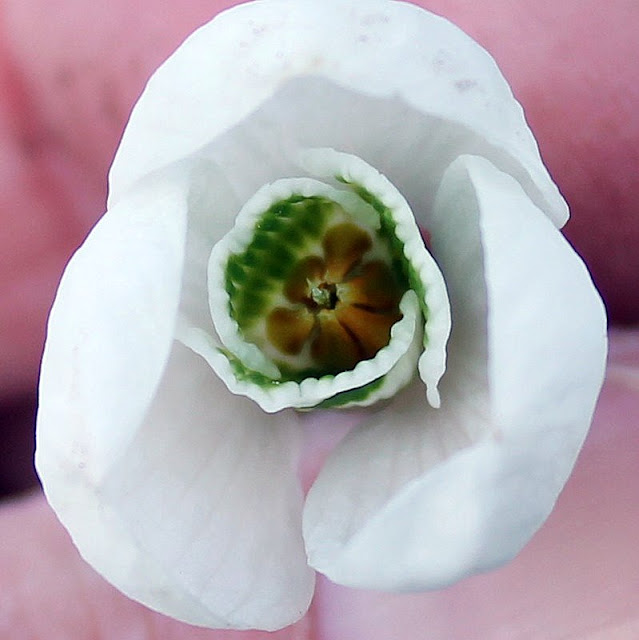 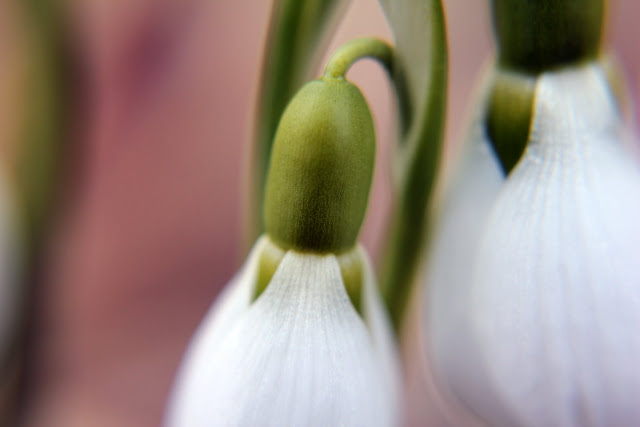 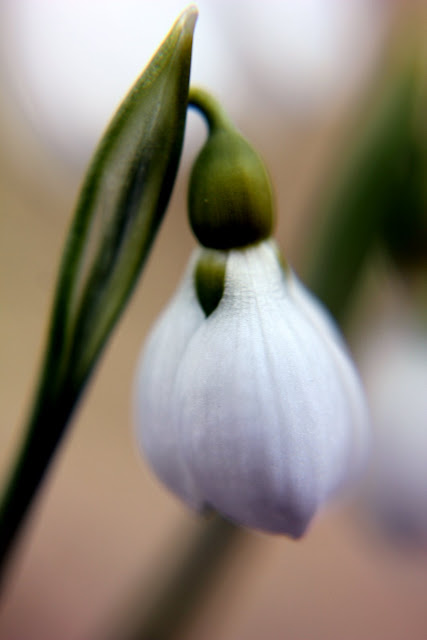 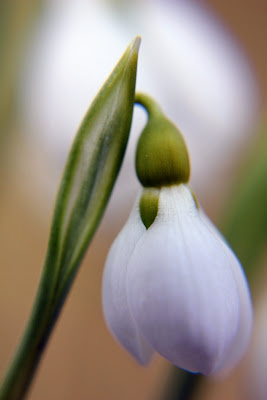 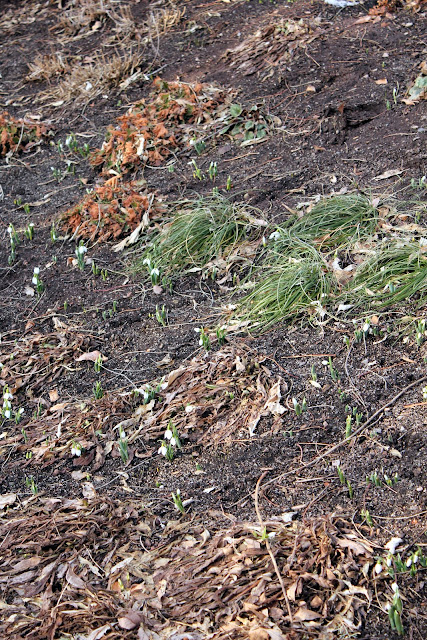 There were signs all throughout the garden; not a one was staked here to say that snowdrops were in bloom.
There wasn't much to see for anyone traveling swiftly by.
Sometimes to find refreshment of ones soul one has be humbly prone, with one's chin on the ground to really see life's garden hidden treasures.

Posted by Thoughts on Life and Millinery. at 11:00 AM

And the moral of this post is to look up, down, and all around. Wonderful photos, Jill! Did you use a selective color setting for any of them? Some just have one vivid color that predominates...the yellow, the red, a blue... Just wondering here now that I'm being so much more analytical.

No filters or color selectors were used. Thanks for the question. Next heavy snow I will try a filter or two to see what happens.

Amen to being humbly prone with one's chin on the ground! There is so much going on from that perspective that we miss otherwise.

Wonderful! You added joy to our day. Thank you. Love, mom S.

Love how the bits of colour pop out in the black/white snow pic's. Great signs too! (Especially the Valentine:)

A winter wonderland captured perfectly from every angle. Snow drops....wishing I had some in my garden...their centres Crafted beautifully!

Oh Snow Drops. That brings back so many memories for me. I really need to plant some again.

Your snow photos are fantastic.

There is nothing as beautiful as a world made white with snow, nor as beautiful as the first snowdrops of the promise of spring.
I much enjoyed your photos...I was hoping for one more snowfall here before winter recedes but it seems we are going to be denied.

Gorgeous photos, Jill! It is so interesting how so much snow and a cloudy sky makes the world look like a black and white photo, so much so that the yellow direction signs becoem a jarring sight.

I've never seen a snow drop flower in person. It is so beautiful!

So lovely Jill! No snowdrops around here yet.

Thanks for the camera tip!! I'm slowly getting the hang of this new one.

Apparently it's quite good and not too expensive.