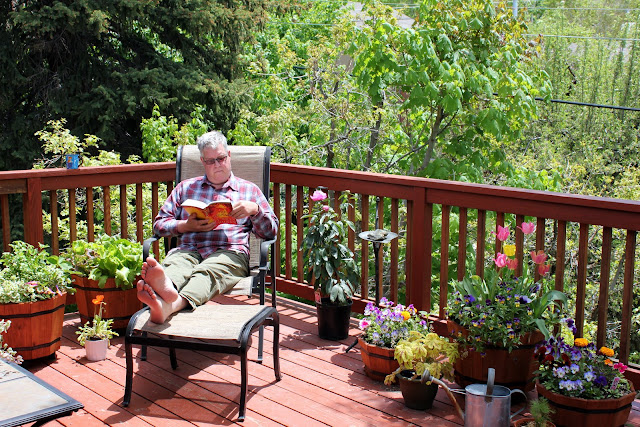 Beginning June 1st, life gets really busy here in Salt Lake City.
My calendar gets packed with so many fun things to do, cultural and otherwise.
Since Monday I have missed three cultural events: Bollywood Dance Night at Red Butte Gardens (sounds funny but I know it must have been amazing...), a reading by the 2010 Utah poet laureate, and an art film about the Great Salt Lake Spiral Jetty.
Those last two items were free to the public by the way.

My dayrunner runneth over....

So why begin this post with Mr. B. kicking back on the deck with a book?
(Hint: the book he is reading is entitled The Passage.  If you know anything about that title you will know why his butt was stuck to that deck chair for two full days...) 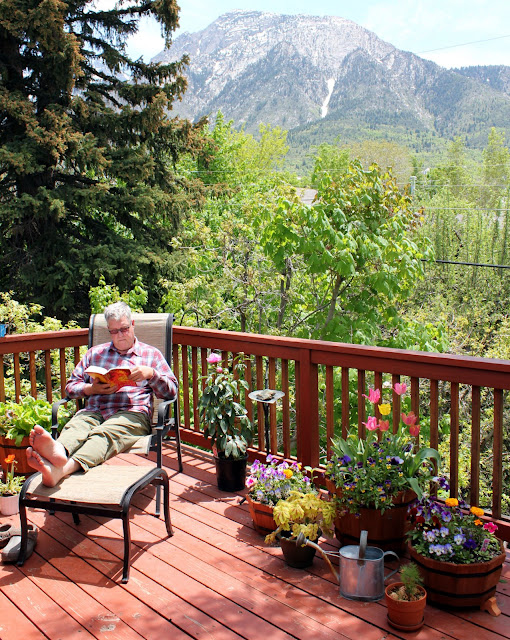 Let me backtrack a bit since last Thursday to catch you up. 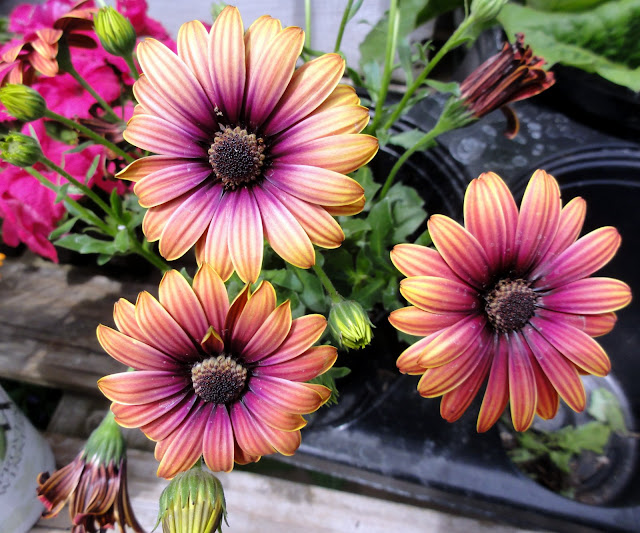 In the afternoon we dropped by our favorite nursery and tried not to buy every fabulous thing we saw blooming.
Limited ourselves to half off Lily of the Valley, some asparagus and eggplants, special bonsai and Japanese maple food and copper plant labels.

Those labels are such a classy way to keep name tags on our ever growing collection of Japanese maples.
Much better than the plastic strips that come with the plants originally. 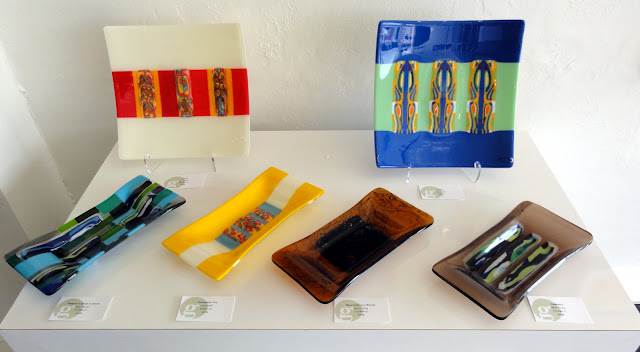 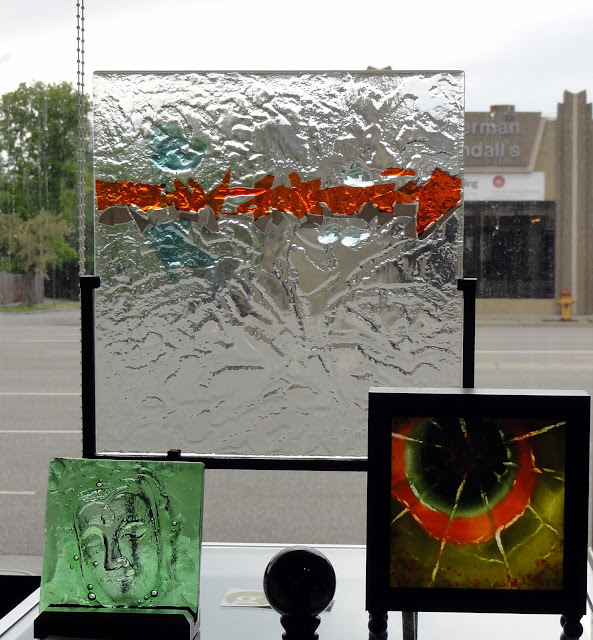 I feel in love with the clear and orange piece.
The show was housed in a larger gallery; we met the gallery owner and discovered that he had lived in San Diego for awhile, and had then moved back to his home town of SLC.
All the art in the gallery was interesting, and he was great fun to chat with about SLC houses and such. 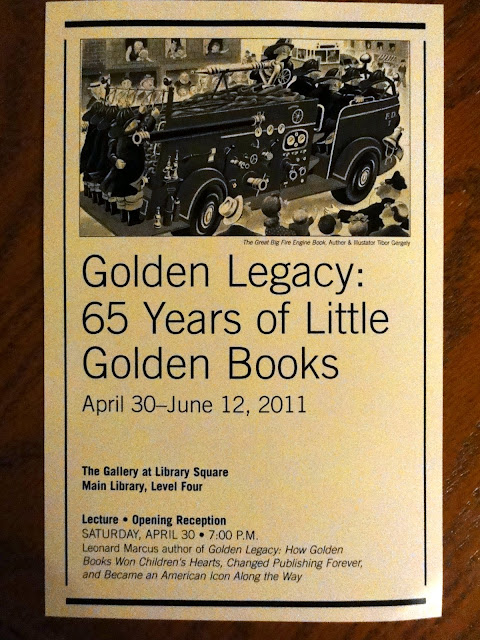 We raced home, I made scrimp scampi, then we headed downtown  to the library for the Golden Book show... 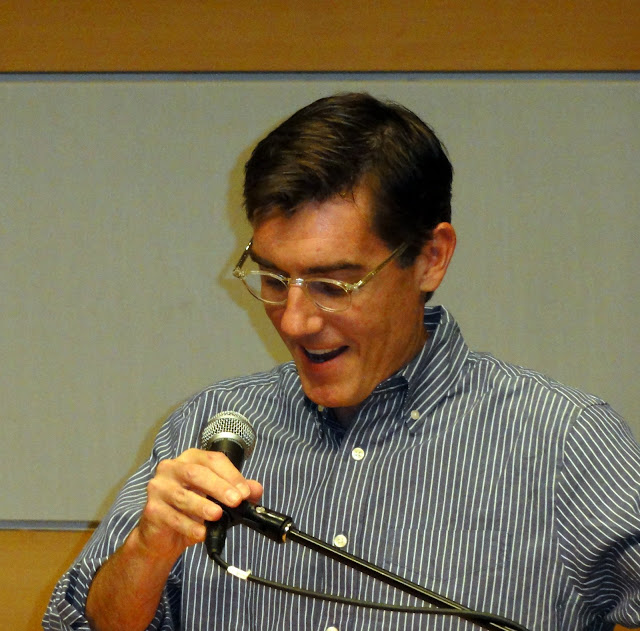 And to catch a reading by the author of The Passage, Justin Croin.
Can you believe this author of a MAJOR best seller and soon to me a MAJOR motion picture was reading from his novel and taking questions from the audience at the Salt Lake Public Library auditorium?
There were only about 40 people there.  Considering how long his book has been on the best seller list, this was quite a surprise.
Mr. Croin lives in Houston, teaches at Rice University, and has written two other novels.
As he shared: He had run out of interest for completing another one of his novels and had already spent the advanced money (whoopsie!) when his then 8 year old daughter said he was worried about him. He asked what she was worried about, she said that he wrote boring stuff.
Normally one would expect an eight year old to find an adult novel boring, so he asked her what he should write about that would make for an interesting novel.  She suggested a novel about a little girl who saves the world, (complete with a hair flick and spin, obviously meaning herself.)

Since the daughter needed to work on her bike riding skills, Cronin decided to go along with her on bike rides and together they decided what would make for an interesting story.

Eventually he had 30 pages of notes.  He outlined the story, and sold it.
The first massive book hit the best seller list hard.
The paper back publication is now out.
Oh and did I mention The Passage is book one of a trilogy?
And parts of the book (the part he read aloud) was set in good old Houston?
We could picture every bit that he read.  We bought the book, had it autographed and Bernie cracked it open.
That was the last I heard a sound out of Bernie for the next two days.
Later we learned our daughter in law Rachel had also read the book non-stop.  The two of them compared notes, whispering so I would not over hear, so when  I finally get a chance to do nothing but read for two day straight the plot twists won't be ruined.
The folks at the reading made it very clear that they were on pins and needles until second book comes out a year from now.
Oh and the guy who did the screenplay for Gladiators is doing the screen play for this book.
It is THAT big of a deal. 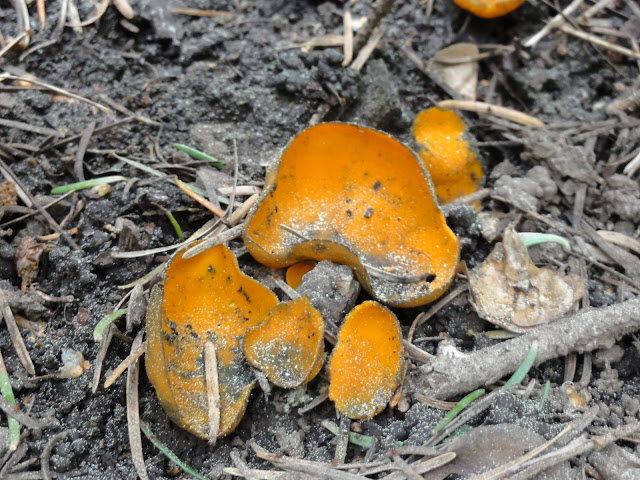 While Bernie read, I went mushroom hunting.
Doesn't it sound classy to say I was morel hunting in the forest?
I think so... 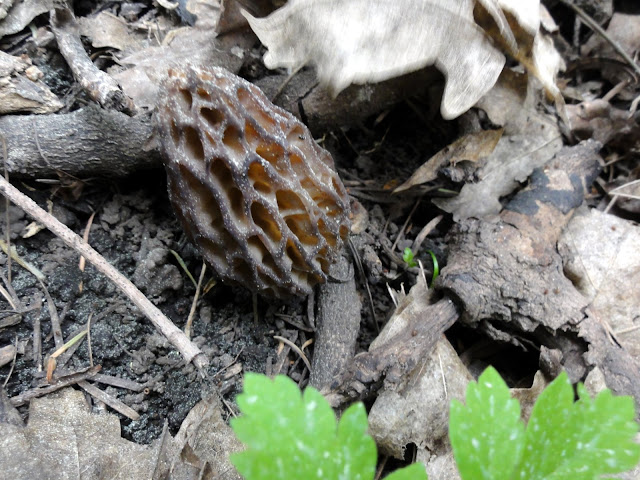 Monday evening I took Bernie out to the woodlands so he could find a morel too.
And he did.
The morel pictures above was the only one gathered; it was lovingly sliced into four pieces and enjoyed with dinner that same night. 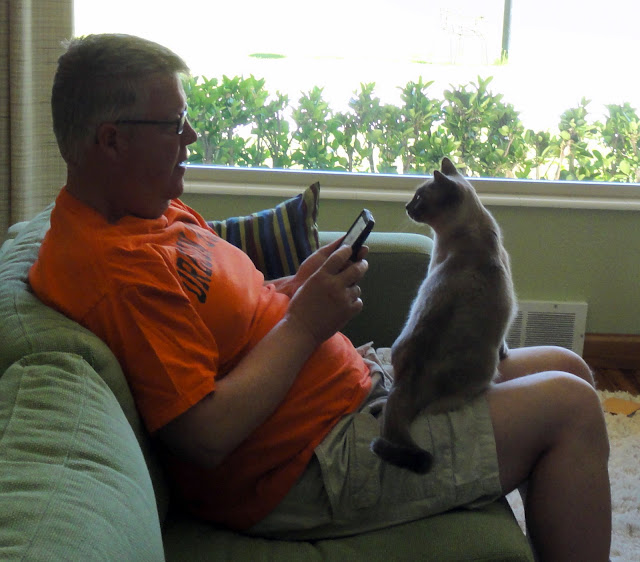 Then this morning another bit of culture came our way, via email, via my long lost distant east coast cat loving cousin.
She sent me THIS link to Duetto buffo di due gatti - G. A. Rossini
I played it.  Bitsy stared at me the whole time I was listening with a most concerned look on her face.
A few minutes later I had Bernie listen to the same thing on my Android phone. 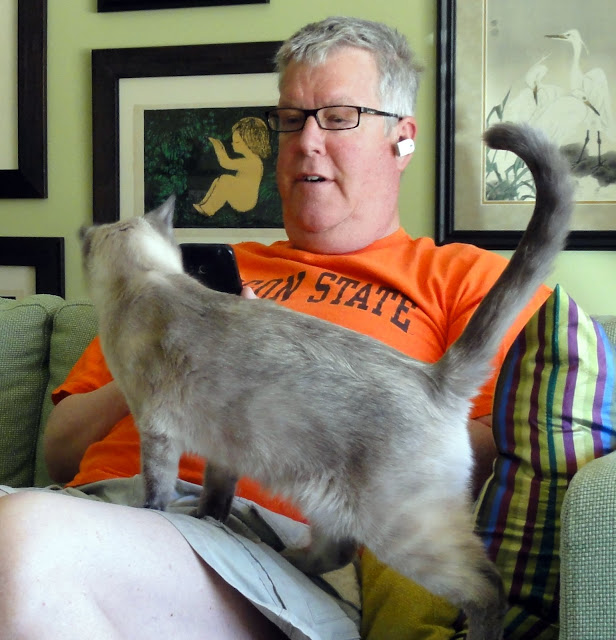 I think Bitsy understood what the boys were singing...and she found it quite disturbing!
We couldn't believe how hard she looked at the screen, fidgeted around and basically gave every appearance of deep concern.
It was hilarious, both Bitsy and the clip! 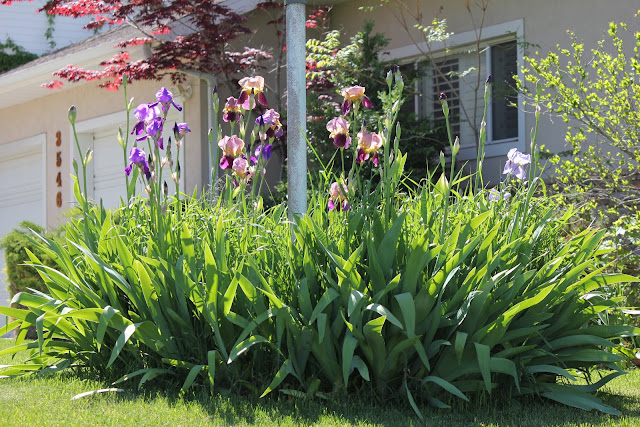 Bearded Iris are blooming all across SLC and our neighborhood.
Are they not the most show stopping "classy" looking flowers? The final round of late blooming tulips are showing up. 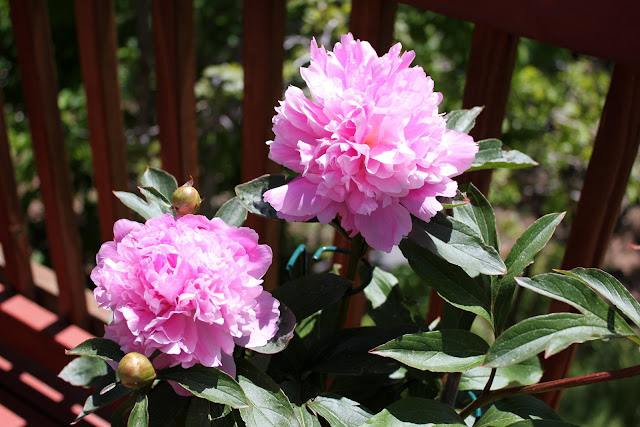 My first ever peony bloom is underway..
(And don't all classic gardens include peonies if the planting range is correct for their growth?) 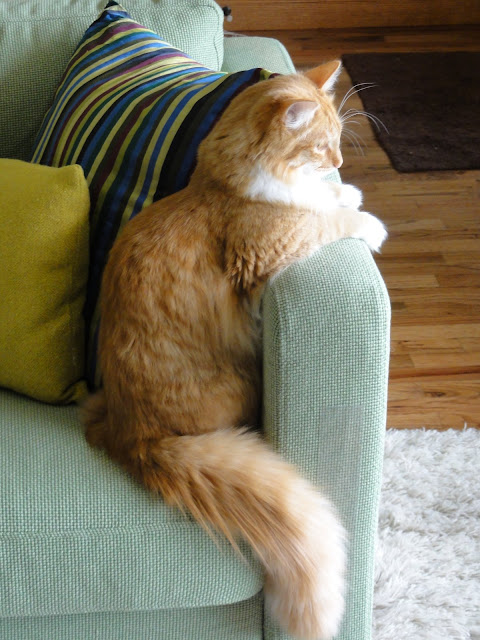 Tate has been involved in his "classy" cultural past time as well. 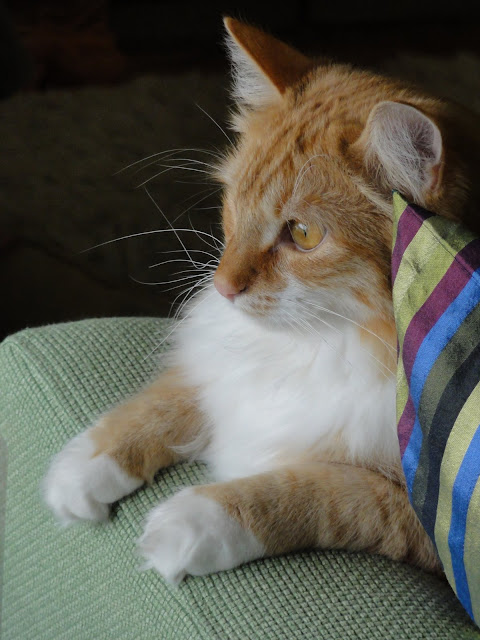 (He was sure I was going to forget to mention this...) 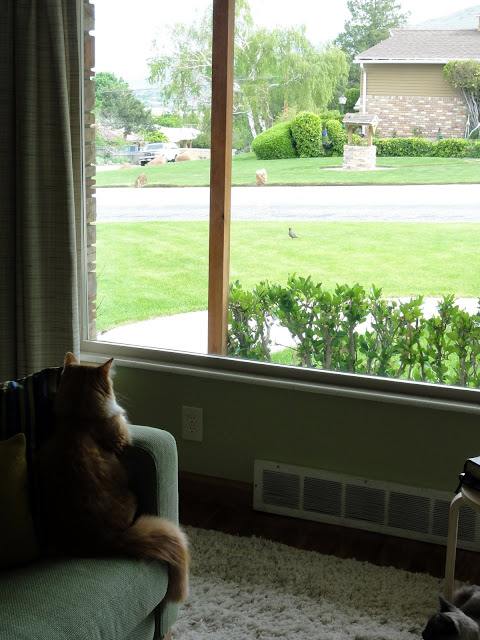 The robins have arrived!
They are outside on our lawn!
A classic sign of June's arrival: a robin has been seen. 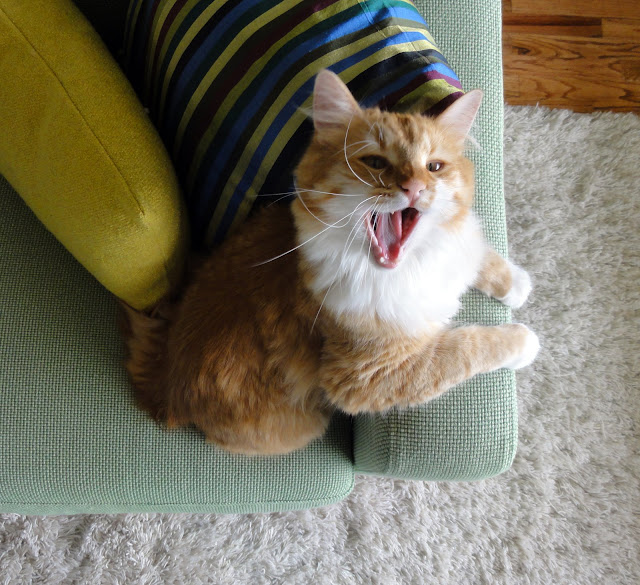 I've also been involved in some much needed interior decorating, another sign of culture and class.

I'll share about that too, a little later, once it is all done!
Posted by Thoughts on Life and Millinery. at 12:40 PM

What a fun post! I've apparently been out of the loop a bit...I've never heard of the The Passage. I guess I need to check it out now. ;)

I thought the young boys in the clip were extremely talented...and so cute! That was fun!

Ahhh...bearded iris. My favorite flower. When we moved from our home in Kentucky to Texas, I had to leave behind my massive collection of iris in every color imaginable. I just couldn't keep from ordering them and digging them up from old homesteads and asking friends to share a tuber...I do miss them. They just won't grow down here at all.

I'm looking forward to the pictures of your "project." ;)

One full post of a little of everything. That must be a good book!
It's great that you got so much in on your calendar. I'm feeling a little tired just going everywhere with you. Your deck looks very inviting btw...

What a whirl wind of cult-cher! Too bad about missing the Bollywood event...that would have been especially fun I'm sure!

Looks like your snow is gone for the summer - hooray!

I think Tate is hoping for some cultured haute cuisine - roasted robin on a silver platter perhaps!

OH you have been busy. The new book sounds fascinating. I'll have to look it up.
I am amazed that your peony is blooming with the recent snow. Your temps go from freezing to hot in one weekend.
We're just watching the canucks lose yet again.. ..very dissapointing. It is a good thing that there is life after hockey too.

One of the reasons I love SLC so much is the many things to do there. There is something for everybody's taste. And I swear . . . if my kids move up there like they are trying to do, I'll right on their tails. I'm not baking here till I die.

Good heavens! You've got so much going on, including the man in a chair on the deck, that my head is spinning. You're obviously folks who take the community up on its offerings. Good. Very. Now I'm intrigued by "The Passage" and probably must find it. I'll have to go back and see what Bitsy was so upset about.

Very cute. The boys did a great job, though they didn't draw my cat, and kept their wits about them as well. I'd have been cracking up throughout. Not quite the marvelous aria from The Marriage of Figaro, but terribly clever!

Lots of cult-cher happening out your way! Your deck looks like the perfect spot to sit back and enjoy a good read...I can see why Mr. B planted himself there. I plan to check out that book.

Congrats on your first ever peony bloom!