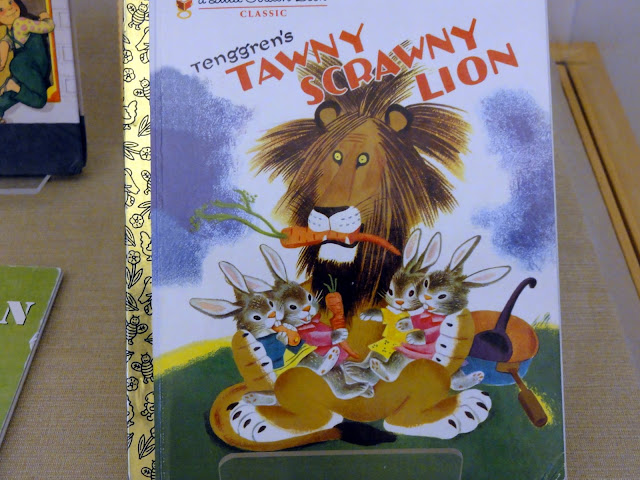 My favorite Little Golden Book: The Tawny Scrawny Lion.
My Dad used to read it aloud to me before I would go to sleep.
I just loved the lion who would chase one kind of animal on Monday, another kind of animal on Tuesday, and so on through the week, and how he never managed to catch his prey.
I won't spoil the plot by telling you more...

My Mom would allow my brother and me to get a new Little Golden Book at the grocery store from time to time.  Eventually we had quite a collection of the small books with silvery golden spines.

I, of course, later read the same little books to my own children.
A few of my Little Golden Books have my name scrawled inside, with the "J" backwards, my earliest attempts at printing my name.
Those books are still at my parent's house, so visiting neighbor children can have a book or two read to them when they come visiting.

It would likely be safe to hold the assumption that almost everyone who is age 60 and under in America has a memory of a favorite Little Golden Book from their childhood.

Last Thursday I got an amazing new yet old Little Golden Book memory. 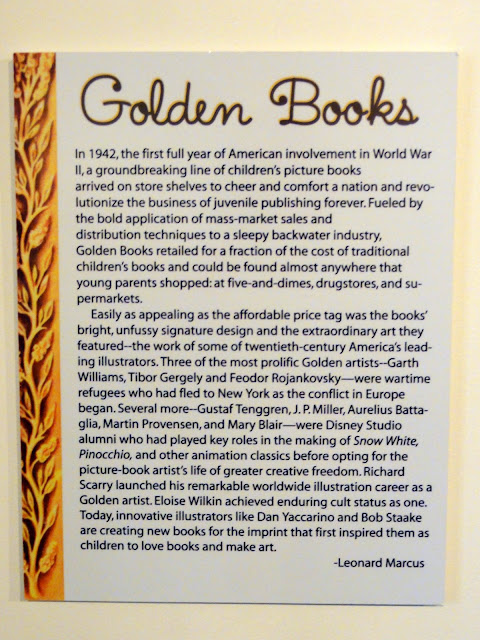 I can not include any photos of the illustrations as photography was forbidden.  A librarian was in the room to make sure no one managed to sneak a photo either.

Despite that limitation, the exhibit was so worth seeing.
Each painting stopped us dead in our tracks and created a yearning to own that particular illustration.
Why oh why hasn't the Little Golden book company released all those illustrations as posters?
The details...the details that we had missed seeing before in our own little book leaped out from the 11x15 inch (or larger) original work.

After we had finally dragged ourselves out of the room with all the illustrations we learned that the collection was the most expensive exhibit that the SLC public library had every shown.

There has been some pretty spectacular shows at the SLCPL before; the privately owned original LGB illustrations are valued at a price that falls into the serious investment level price point.

Since the Little Golden Book company no longer owns the illustrations, they have no way of offering re-prints of the originals.

Those folks who were lucky enough to acquire the illustration were very lucky indeed.

The librarian on duty steered us to a book that told the history of the Little Golden Books.  Apparently there was quite a story beyond sweet little books with darling little illustrations. I am not sure I want to read the history book; it might spoil my pleasant memories if I know what went on between adults back then. 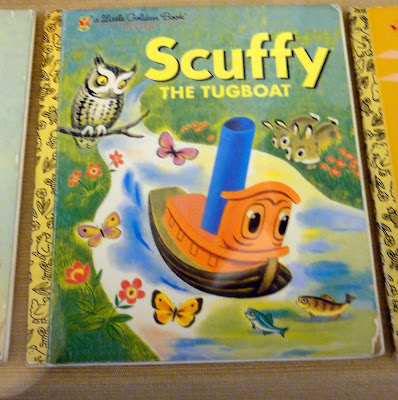 I didn't take a picture of every Little Golden Book that was on display inside a Plexiglas display box; maybe I should go back and do that just that.

Photography of those books were permitted, and that might just give someone an idea of how they could get a poster sized print made of their favorite LGB page. 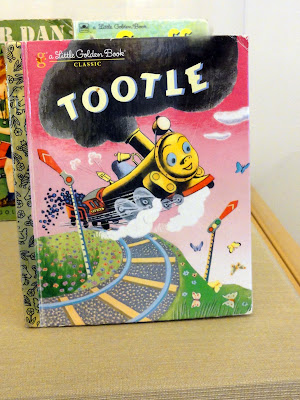 So now I have a question for you:  What was your favorite Little Golden Book, and why? 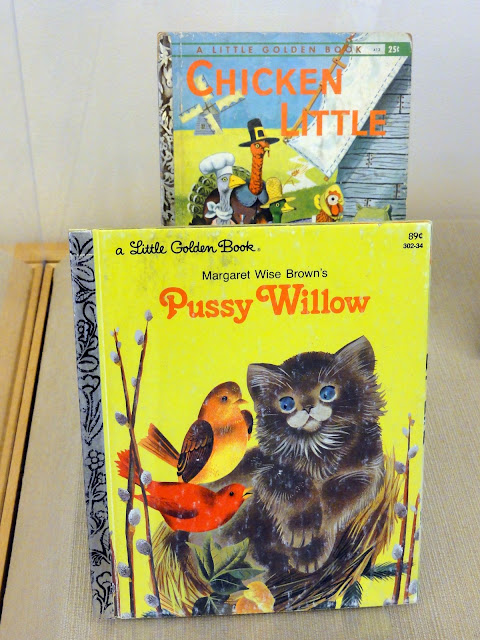 Bernie pointed out the cover price on LGB rose over the years.
I think they were about a quarter when I was a child.
Next time I see one at the store I will have to check and see how much they are going for today. 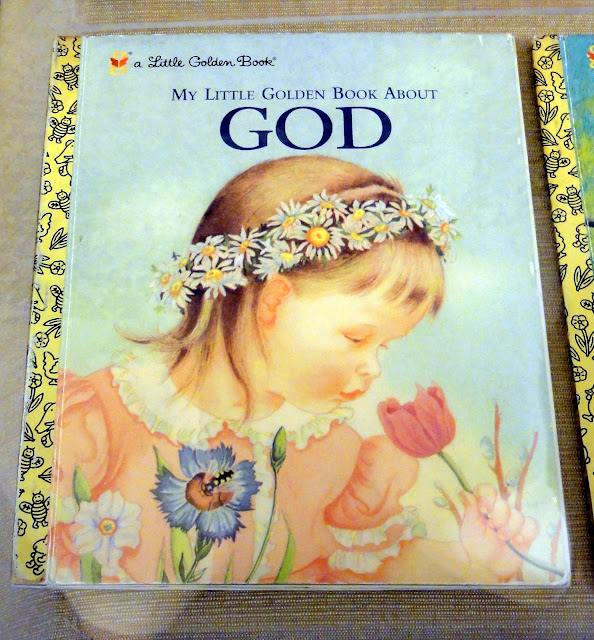 Some illustration earned a special place in my heart after I was all grown up.  If I could snap my fingers and make a wish come true, it would that everyone reading this post could see the original illustrations done by Eloise Wilkin.
They are breath taking beautiful. 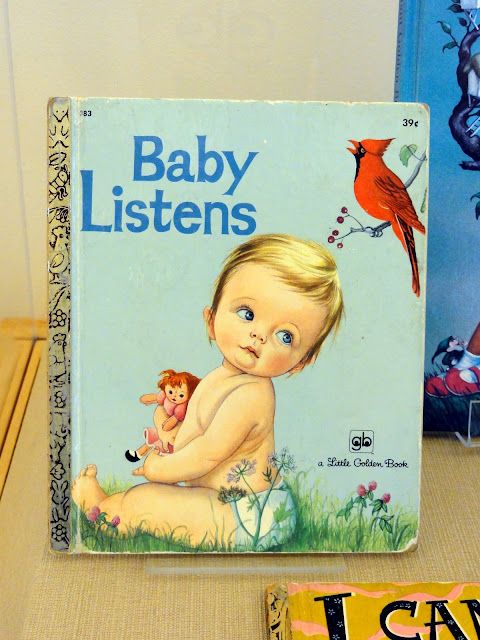 The children she painted looked like they could take a breath and come to life at any moment.  The pictures in the books are lovely; the original art...hauntingly beautiful 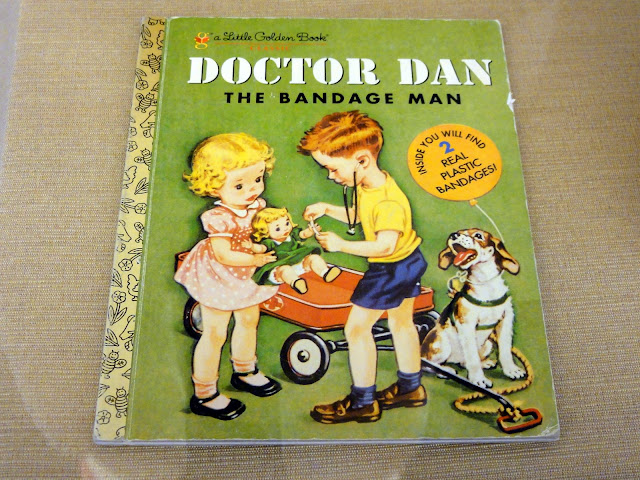 I don't remember having seen this particular LGB before.
As a seasoned mom, my first thought concerned how bandage distribution was managed in families with more than two children.
Or in families with only two kids, where one of the children was quick to peel and stick those bandages on something before the second child could even say "boo".

Did the book buying mom restock the bandage collection to make all the kids happy?
(I know my mom took a dim view of bandages being used willie-nillie.)

Anyone out there have a memory about "Doctor Dan the Bandage Man" as a child?  How did your family manage bandage distribution?

(Perhaps more significant: Could this problem's solution be applied to medical care distribution today? Did this book foreshadow a major health care dilemma for the young reader in later years?)

Looking forward to hearing about your favorite Little Golden Book memories.
Posted by Thoughts on Life and Millinery. at 9:09 PM

Oh, what memories! I believe there's a box in the top of a closet here in the house filled with Little Golden Books! I loved mine growing up. I can remember most of those you had photos of (but not Doctor Dan), in addition to the LGB of Prayers, LGB of Trees, and so on.

Both of my children received multiple copies of The Tawny Scrawny Lion as gifts (they must have been purchased in gift packs back then). I wonder if Aiden has his first Little Golden Book yet? I've been focused on building his collection of Dr Seuss and Einstein books.

I don't recall any Little Golden Books from my childhood...since books were not a top priority on my parent's list...it seems. But I wish I had kept all the LGB we had for our children. I think the one that got read the most times was 'The Little Engine that Could'.

What a great memory post. I bought new golden books by the pack. I love how the books are timeless. I am sure I know a few off by heart already and so do they. The two favorites are Scuffy the tugboat ..and Little Red Postman.

Love this post and love LGBs. I would enjoy this exhibition. Just wish it weren't so far away.
When my boys (23 & 25) were little I bought "We Help Mommy" and "We Help Daddy" by Eloise Wilkin. The boys enjoyed hearing them, but I fell instantly in love with the illustrations of Eloise Wilkin. That was before the internet so I remember sending a snail mail letter to Golden Books to find out more info about Eloise. Since then I have been on a hunt for any and all of her precious books. Along the way I have found several LGBs to add to my collection. I buy them from thrift shops mostly for the adorable and charming illustrations. I even have a copy of Doctor Dan. I don't remember it from when I was a kid.
Love the history you provided on how they came into being.

I do have some memories of the books. Call me strange but one of my favorite parts were all the little illustrations that framed the back hard cover of the books...

There were always lots of books around our house from my earliest memory, but I'm afraid I must disappoint you and say I don't recall any Little Golden Books in particular...perhaps this is because there were five of us kids all one year apart and my parents didn't seem to have any time to read bedtime stories to us...plus I graduated to the grown-up's section of the library at about age 11. Gosh, I'd really love to peruse all the illustrations and pick out those I like the most now, as an adult!

A Child's Garden of Verses was my favorite. I purchased many of the ones you've mentioned for my own children, though I don't see these books in grocery store aisles these days. Where are they? The last one I purchased was printed the year I was born and was about a bridal party. Interesting to read about the original illustrations.

Your Dad and I loved reading this blog as it did indeed bring back so many wonderful memories of reading the Golden Books to you and your brother. Dad especially remembers reading the Tawny Scrawyn Lion to you and adding different voices to the different animals in the story. Alas, that book didn't get saved as it finally was too worn out to save. But I still have three well worn Golden Books in my children's book basket. In it are books from your childhood and grandchildren Laura and Jeff's...like Pat the Bunny etc..and others I collect. When the two children from next door(ages 3&6) come over they go to the basket and the three books they always want me to read to them first are the Golden Books! I still have Mickey Mouse's Picnic...Donald Duck's Adventure and Tom and Jerry. And yes, I always smile when I see your J written backwards! Maybe we can find a replacement for the Tawny Lion. Love you, Mom

Thanks for the fun post. My favorite Little Golden Book was The Poky Little Puppy, one that was not on your list. Librarian in VA

Love these books! We've been purchasing several for Lizzy, in addition to my old collection. Our favorite is The Owl and The Pussycat, which I still have memorized from reading so many times as a kid. Lizzy and I both love the Tawny Scrawny Lion too, but reading it as an adult, I sense a strong vegetarian message in there!