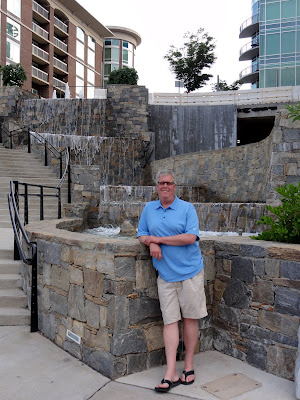 Downtown Greenville has a park that straddles a river; and it has some wonderful attractions for both visitors and locals to enjoy. It only took a few moments to find parking, (shock!) just about a block away (double shock!) and we strolled down to enjoy what was to be seen in Falls Park.

No, Bernie is not standing in front of "the" falls for which the park is named. 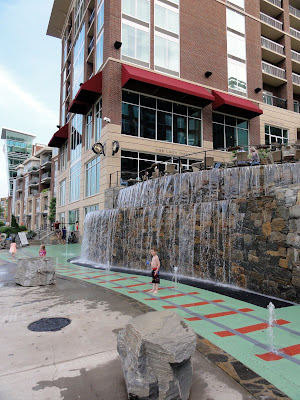 He was standing by these falls, which end in a rail road track motif child's fountain play area. The tykes were having a blast dodging the surprising water burst. I took a run through myself...it was hot and quite humid out and I was game to get wet. 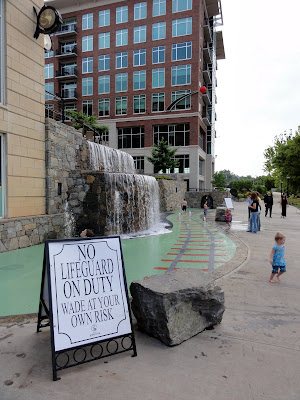 I have to wonder if there wasn't an element of over-cautiousness with this sign.

Do they have life guards on duty sometimes? Aside from laughing yourself to tears over the antics of the kids, this would have to rate as the easiest life guard duty ever. 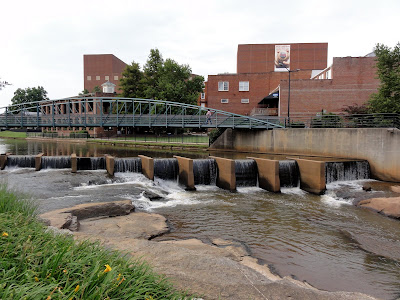 Well...to be open minded...perhaps the sign referred to the river just across the sidewalk and a bit of lawn.
My first thought was that these were "The Falls".
They weren't. 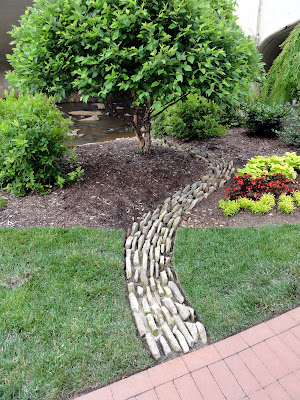 I'm always on the lookout for new ways to suggest a dry creek bed. This one works well using up ended flagstone bits. There's a spot in my garden at home that may receive this treatment. 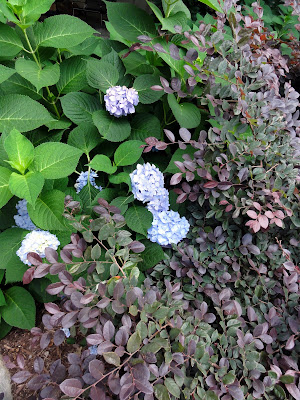 I'm also always on the look out for color combinations in the garden. The purplish shrub underscored the blue in the hydrangea. Nice!

Where we first entered the park there were art galleries, gift shops, condo units and restaurants.

Most of the galleries were already closed for the evening, but the restaurants were beginning to fill up. We decided we would explore the park for a bit and then figure out where to dine later. 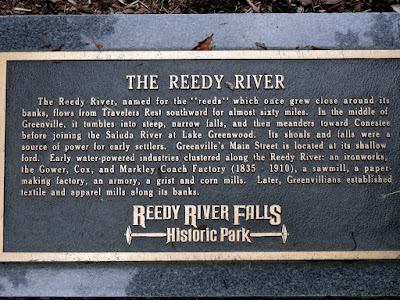 A bit about the river: It is called the Reedy River.

If you enjoy learning about such things, enjoy pausing and reading up on the Reedy River and Reedy River Falls Historic Park. 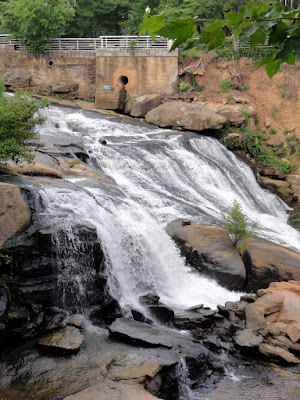 We had only walked along side the river for about ten minutes (s-l-o-w-l-y in the heat) before the "Falls" part of the name was visually demonstrated. 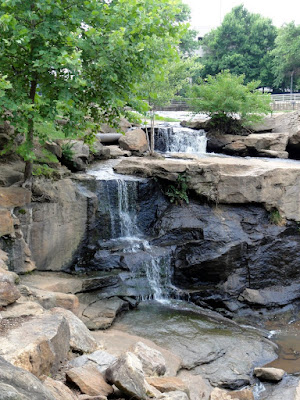 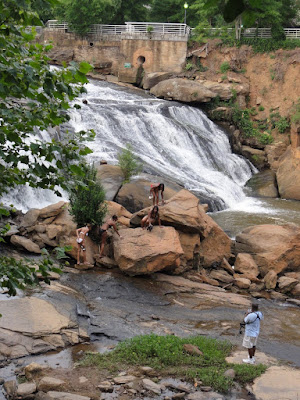 The river and falls had people out in the water (sans life guard guarding) all along the way.

A bevy of bikini clad babes were carefully easing their way through the shallows while a big fully clothed photographer was taking their pictures.

(And all the male readers said: Nice work if you can get it!) 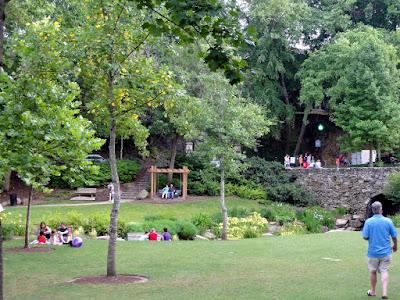 The river was edged with lawns that were being used for family and couples picnicking and playing. Crossing the river was possible over a suspension bridge that still baffles me.
Bernie did explain to me why the two leaning poles on the same side held the bridge upright.
It is probably a good thing that I am not interested in becoming an engineer. 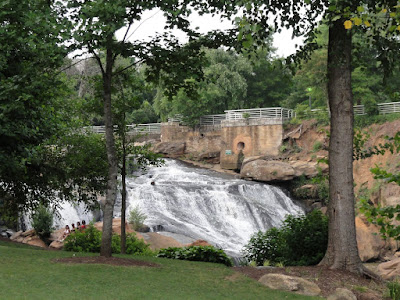 As we walked along falls after falls could be viewed between the trees. 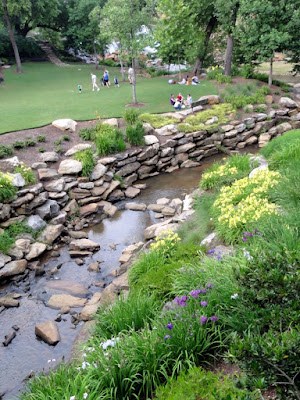 A small streamlet was well landscaped with iris and other waterside friendly flowers. 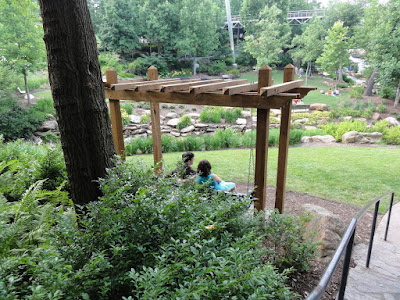 Every little bit there was a wooden bench swing that, yes, of course, we enjoyed for a moment or two. So restful, so romantic. I really don't understand how anyone in Greenville ever gets anything done with such a lovely option available to them. 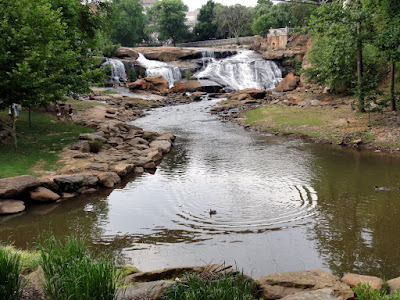 What more could you want for a view from a swing with your sweetie beside you on a warm June twilight? 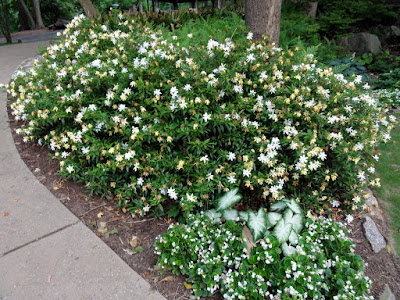 Well, obvious...gardenias of course. The air was scented with an amazing mix of gardenia, honeysuckle, mimosa, magnolia, freshly mowed lawn, and river water.

I'm here to tell you: The scent, the sound, the feeling of the warm heavy air on the skin...this is why people love the south. 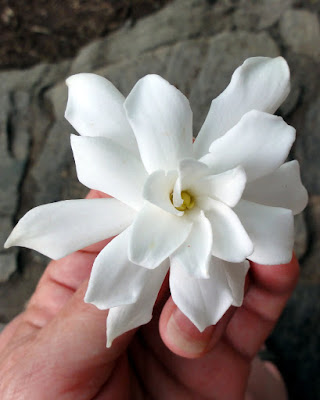 I picked a single gardenia blossom and breathed in as deeply as I could. It almost made me swoon, to use the old fashion word. Sneaking back to Bernie, who was taking a break on one of the swings, I asked him to close his eyes, then put the flower under his nose and told him to smell.

He nearly swooned too. 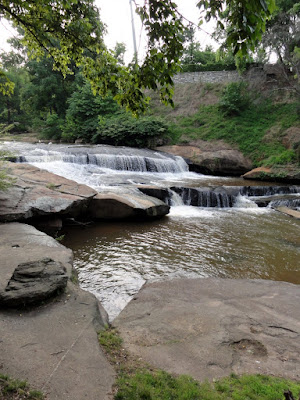 The worn warm rocks, the classic southern muddy colored water: every step we took presented another beautiful view of the old Reedy River...views that we imagined people have enjoyed in summer since before recorded history. 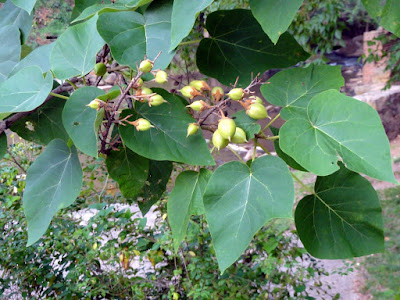 I am not sure what this tree is called. I looked up red bud...it definitely wasn't that.
The "fruit" is about the size of a lemon. 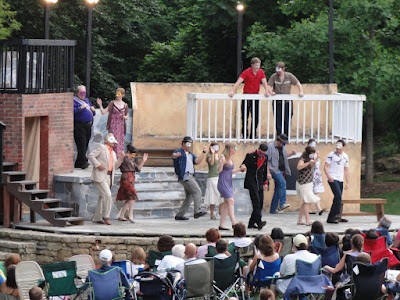 Also happening in the park: An open air play: a modern interpretation of Romeo and Juliet put on by the students at Furman University. Furman's campus borders Falls Park. Again...how do STUDENTS get anything done with such a lovely setting to visit so near by?

(And yes, we saw lots and lots of young college age couples strolling through the park hand in hand. The young ladies were nicely dressed in pretty summer dresses...like every southern belle is dressed, of course!) 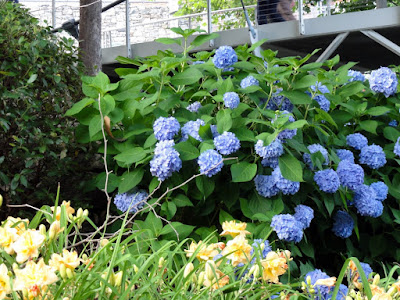 Being raised where all hydrangea blooms pink, I was really enjoying the blue coloration. I know hydrangea blooms either pink or blue depending on the acidity/iron content/something of the soil. This park clearly provided the best soil conditions for blue blooms. 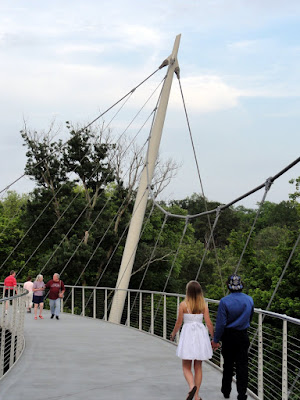 Of course we had to walk the bridge...

(Don't you think that girl looks sweet in her white summer dress?) 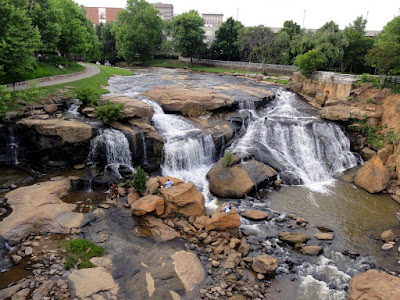 View of one part of the falls from the bridge. 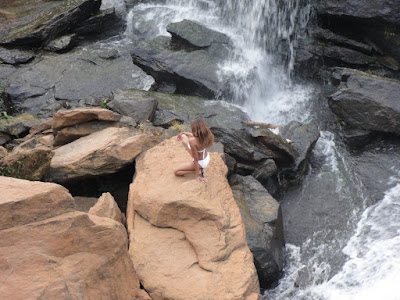 The modeling continued. How on earth did she dared to climb up on that rock in a white swim suit mystified me. 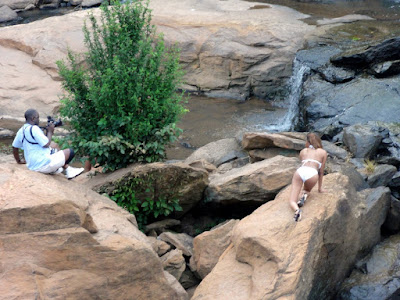 Five inch stiletto heels on her, because, you know, everyone wears high heels with their white bikini out in the middle of a river....

(I'd love to know what the pictures were used for. They were a little tame/modest for Sport's Illustrated...) 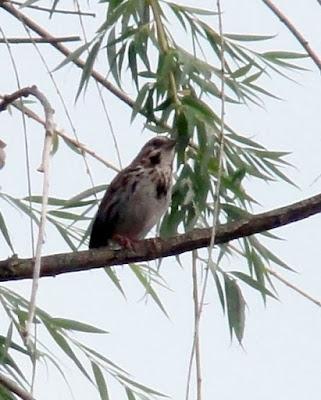 Adding to the sounds of the falls: this bird trilled beautifully overhead. 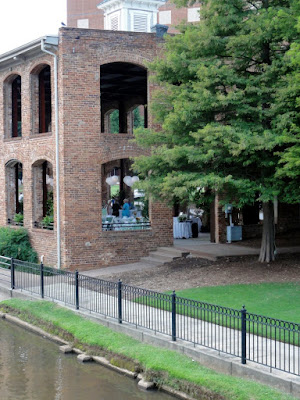 The opposite side of the river was a simple walk way and this old mill work building that had been reclaimed for receptions.
No windows...just a great river view which only improved as night fell.
To be continued...
Posted by Thoughts on Life and Millinery. at 9:05 PM

It really looks like a great place to visit for an adventure. Love all the water features.

I am back to admire the pictures once more .. so lovely and such a romantic looking place to visit.