You Know Your Friend Knows You When.... 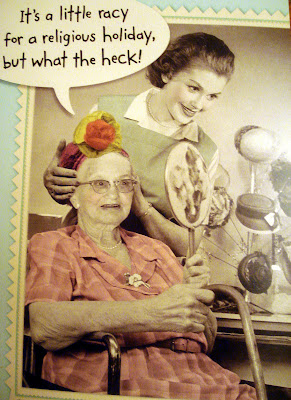 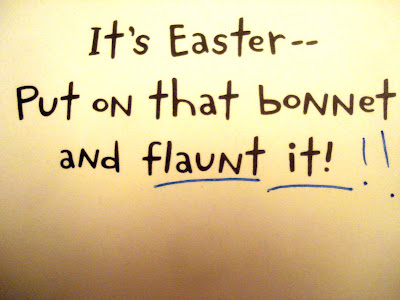 She has a knack of finding just the right card

at just the time.

(Like she did to me with the Easter Hat card pictured above.)

Let me tell you just how good she is at this:
One day she found a birthday card that was just perfect to send to her younger sister.
So she immediately bought eight of them.

Then, a few days before her sister's birthday, she dug out one of the cards, sign it, and dropped it in the mail.
A year later, she mailed off the next one.
The year after that...another one was sent.
And so it went, year after year the same perfect card was lovingly sent.
Year #7 Gail's sister finally figured out that Gail had been sending her the same birthday card every year.
Gail was called; the joke was out.
They laughed together, and all was well.

The next year Gail sent her the same card all over again.

That happened years ago...and I am still laughing about it right now.

(And now maybe you are too!)

Posted by Thoughts on Life and Millinery. at 11:00 PM

Now that's a great idea and I might just have to steal it!

I'm laughing about the same card year after year. Here's my trick...when I find the perfect card from my hubby, I am sure to file it together with the envelope once he is done with it. It is bound to come in handy again sometime...and he still thinks it is perfect second time around!

I love it. . the card is perfect. I actually bought your birthday card months ago . .but it isn't nearly that funny. . she really is the master card finder.

This is the funniest story. I never heard of anyone doing this. I am still smiling. What a dear friend.

What a great idea...I think I will try that card trick on some of my friends...Makes for a good laugh...especially if everybody else knows what you are doing.
We have a monthly birthday gab...so that would be perfect.

My mom and one her dear friends sent the same card to each other for their b-days - for years!! They kept crossing out each others' names and signing again - they thought it was hilarious and it suited their frugal personalities :)