Where Were You When It Happened? 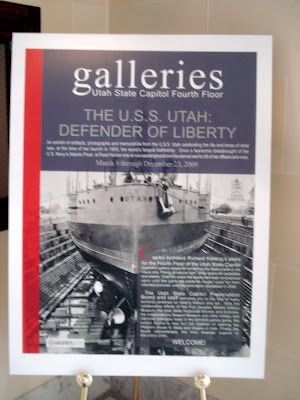 It was so odd.

I don't think I will ever get over it.

Maybe after you read this you too will feel the way I did that day.

To me...it is important that you do.

Last September, as I walked about the Utah State Capitol, I saw that there was a display about the USS Utah.

Of course, I thought to myself.

Why wouldn't the state capitol of Utah want to show off the Navy ship that bears the name of Utah? 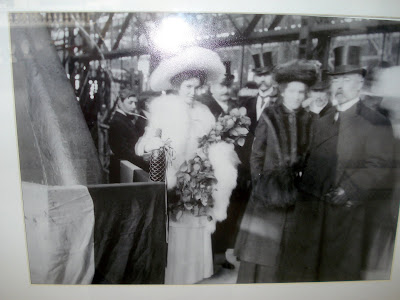 I'll admit it...the hat in this old photograph was what first caught my eye. 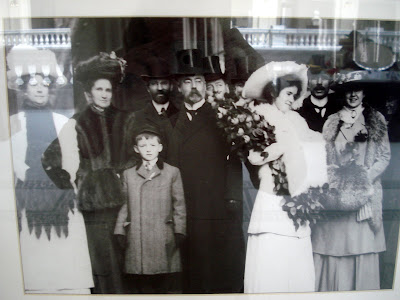 All the hats were amazing at the christening ceremony for the ship back in the 1920's or so.
Those roses must have weighed a ton!
And that sweet boy...how absolutely adorable he was that day in his formal coat and little cap. 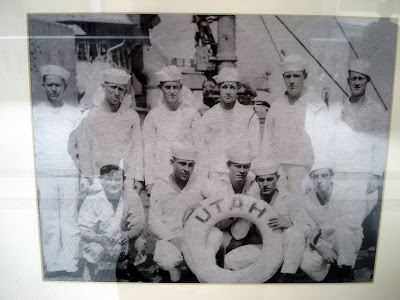 Then there were the faces of the crew of the ship.

I looked at them, knowing they were enlisted men, probably in the early twenties.

Were the youths of decades ago just like twenty-something young men today?

They were in their "whites"..the picture must have been taken in summer. 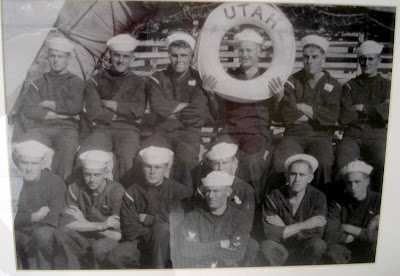 It couldn't have been very cold if they rolled back their sleeves like that.

And the prankster framing his face with the life preserver. Isn't there one guy like that in every group? 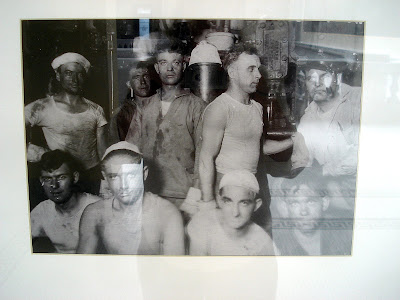 The engineering crew...shirtless against the heat of the engine room, working in the dark dirty spaces below deck.
There were other shots too...groups of sailors playing musical instruments, diving off deck for a swim, playing cards...the usual things that told me they were just like any group of twenty something men of any era.
As I went from picture to picture I imagined them as my father when he served aboard a ship.
I tried to picture guys I knew when I was twenty...
And twenty something guys who have married friends of my daughter.
I saw typical sailor's duffel bags displayed and woolen swim suits (made me itch just thinking about it...)
Carved metal pieces, letters home, trinkets and souvenirs.
I laughed at a display of gorgeous sterling silver....the service pieces used by the officer's dining room.
The children of Utah raised the money for the set...and each piece carried a bit of engraving about Utah's history.
When it was learned by the newspapers of the day that the Salt Lake Temple was one of the images, there was an national uproar.
People across America went before CONGRESS to complain about that detail!
In the end, the Utah governor said the complainers could just stick it in their ear (in so many words) as the Temple was clearly part of Utah's history.
Shades of later debates concerning the bogus idea of "separation of church and state"!
I was really getting into the history of OUR state's ship when suddenly....
unexpectedly....
sickening.... 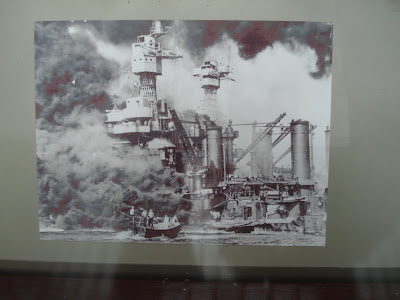 I saw this photograph.
The USS Utah in flames...with men scrambling to escape in small rescue boats.
Literally I felt ill. Shocked...horrified...protective of those faces I had studied...angry...helpless... 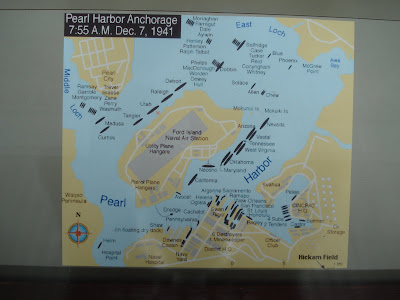 And yes, disappointed in myself.
How could I have not remembered the USS Utah was sunk at Pearl Harbor?
There were many photographs...
Each battered my heart.
It was as if it was happening for the first time...right before my eyes. 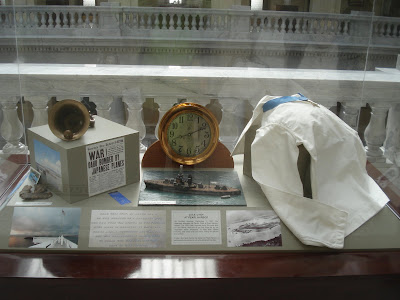 There were displays of the ship's bell set at the time of the merciless attack. The telegrams...the Medal of Honor displayed on the shirt of a man who had no family at all to mourn him.

Later when I went back to the Capitol with my dad we walked the gallery again. He told me more details about what I saw in each picture...a navy man knows more about what each picture says than I would ever guess.

He told me the story of his friend from boot camp who was at Pearl Harbor that day. His friend's ship sank in seconds...and he was saved only by ejecting himself through the tiny opening that spent shells were sent through. He was picked up the from the flaming oil slicked water moments later...one of the lucky ones who survived.

Later his friend had a chance to visit a similar ship. He had not gained an ounce...but could not even get his shoulder through that opening when he attempted to demonstrate his miraculous escape.

The survivors of the attack of Pearl Harbor dwindle every day. Many of their stories have been recorded in print and in digital formats. A quick search of any information resource will let you know their memories. 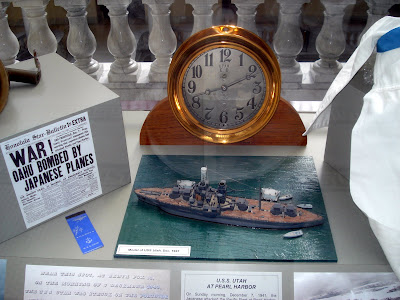 What I didn't know was that that day back in September, when I decided on the spur of the moment to take a trip to the State Capitol, that that day would become my own personal December 7, 1941.

Today, 67 years later....perhaps you will for the first time emotionally experience it too.
And like the generation before me, know it will be a day you will never forget.
(Thirty officers and 431 men were reported to have survived the loss of the USS Utah that day. They went on to serve on other ships during the war...the war was personal to them. At best estimates, six officers and 52 enlisted men were lost, some trapped aboard ship, others cut down by strafing aircraft. Today the USS Utah is still visible it its memorial at Pearl Harbor, rolled over on its side.)
Posted by Thoughts on Life and Millinery. at 8:14 AM

What a moving tribute, Jill, to the men of the Utah. Like many others, the only ship I was familiar with from that horrible day was the Arizona. Thank you for making this more personal and, therefore, even more meaningful.

Very interesting history indeed! It's always more menaingful when it becomes personal . . . I've never been a history buff, but as I've heard or read stories of my grandparents and what they went through, history took on meaning because I saw how if affected loved ones.

My dad was still in Navy boot camp on December 7, 1941, but sometime later he was in the South Pacific; that was his war....he saw plenty of action, including Kamikazi attacks on the ship, but never talked about it much.

I have a good friend who was 6 months old on Pearl Harbor day; she spent the first few years of her life in Manzanar; her parents lost everything.

War and all that it does makes me terribly sad.

Thanks for sharing this piece of history with us, Jill. The strange thing is that I was reading about Pearl Harbour in the 'Our Daily Bread' devotional for today...and some good that came from the whole tragedy much later.

Like you...I know eactly where I was when each of those tragedies ocurred.

Seeing the faces of the boys, really, makes the horror hit hard. Thanks for telling this so vividly.

I remember where I was two out of the three tragedies in my lifetime occurred - not the Challenger - not as vividly.