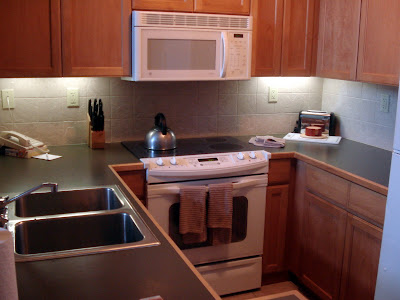 Let's see...what should I share. Here's the kitchen in our time share. I haven't made anything more complicated than a bowl of cereal in there so far. 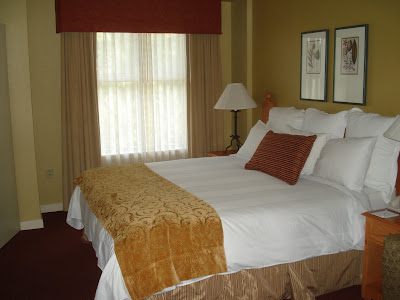 This is the second bedroom...which we are not using. It is actually its own unit, complete with bathroom and small kitchenette. 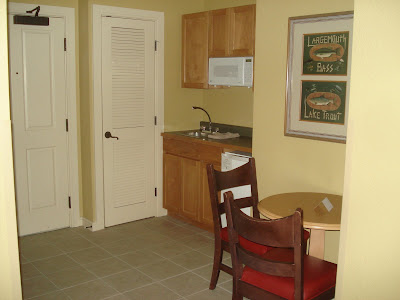 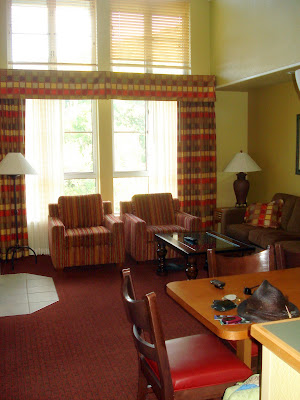 Main living and dining area. The couch is a sofa bed, as is the couch in the second bedroom. The timeshare sleeps eight.
(Not that I want to have six other people joining us...but for a group get-away, it would be fine.) 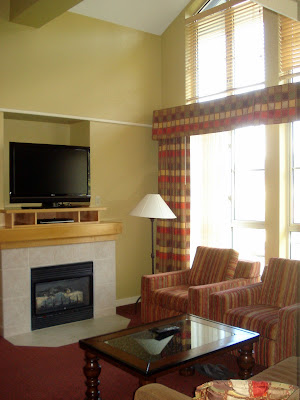 Fireplace, mountainside views...each bedroom has its own TV. We caught the movie "The Secret Lives of Bees" last night on HBO. Very relaxing way to catch up on movies! 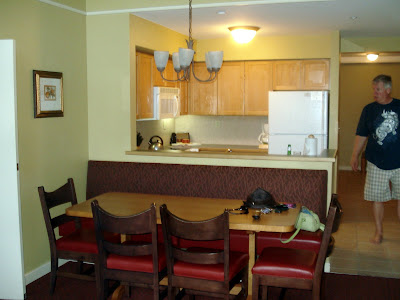 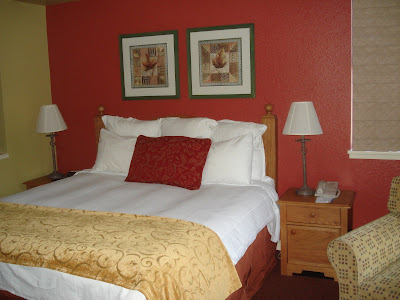 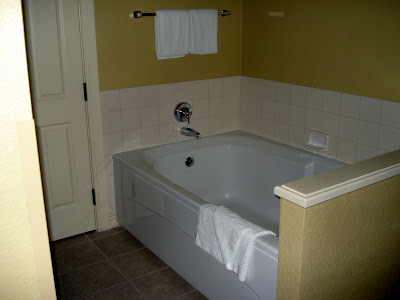 With huge double wide tub, and vanity area across from it. 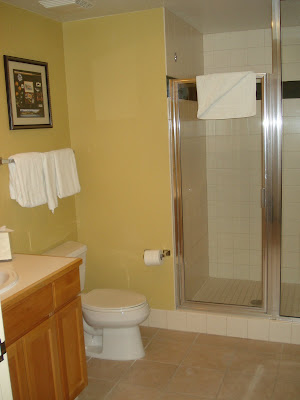 And another vanity, and huge shower.

The lobby had a story board of the upcoming re-decorating. Granite counter tops, new furniture, drapery, carpet etc etc.

We bought the Park City timeshare in view of using exchange privileges around the world. Not wanting to fly anywhere this year, we had to use up our "week" (we actually have four possible weeks) and this week was available at Park City...so that was that.

I have to admit that it is somewhat annoying to realize we have NO ONE who wants to come up to Park City and stay with us. Next year, we are going to try harder to make friends.

Or bribe strangers who might be willing cook for us in exchange for the second bedroom at a very reasonable rate. 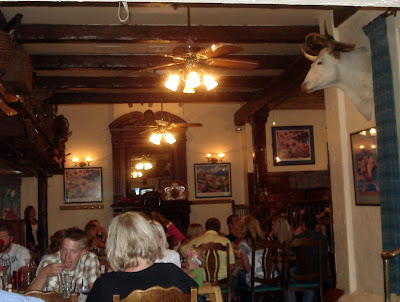 First night we walked over to a Mexican restaurant. That was Sunday night 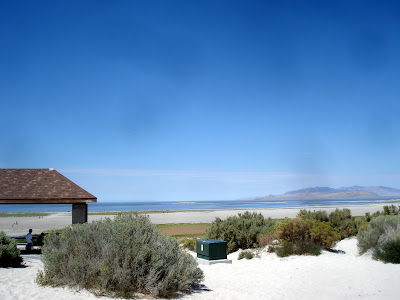 Monday was our dunk in the Great Salt Lake. It was quite different than last year; the water was cooler, the wind was blowing, and our "bob around" time was much shorter. 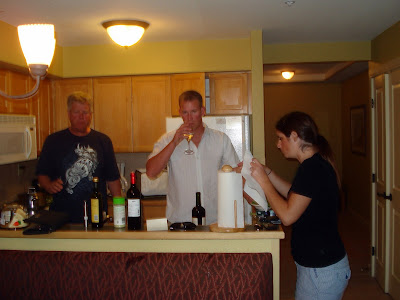 Jeff and Rachel came by and brought dinner to cook up. The guys got right to it, we girls set the table and did the small details, including wash up after dinner...(thank goodness for the dishwasher!) 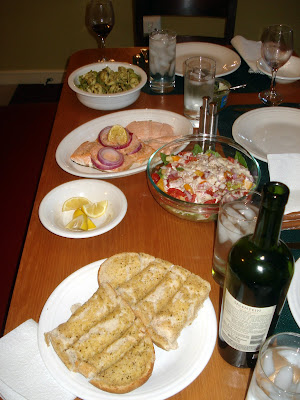 Tomatoes from Jeff's yard, cheese and basil for apps, grilled and steamed salmon, whole wheat garlic toast and pasta w/salad for dinner. Store bought carrot cake for dessert.
We are easy to please...l 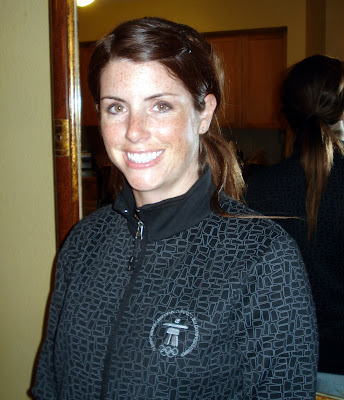 Rachel and Jeff both sported their newly purchased jackets from their trip to British Columbia last month. 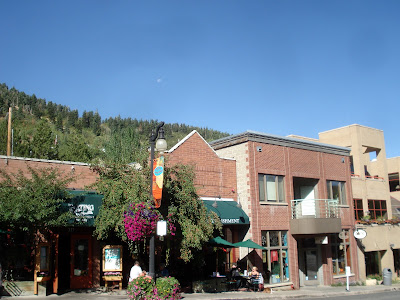 Tuesday I shopped the end of summer sales up north in Layton, while Jeff and Bernie got in a round of golf. This morning B. and I headed to our favorite breakfast shop behind all the hanging flowers. 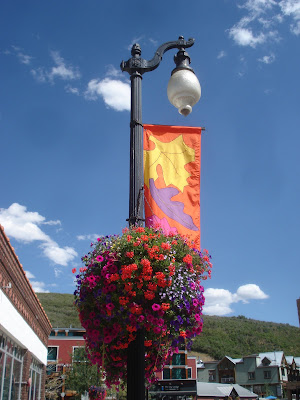 Snow could happen in a weeks time, or not for three more months. Be proud while you last pretty flowers! 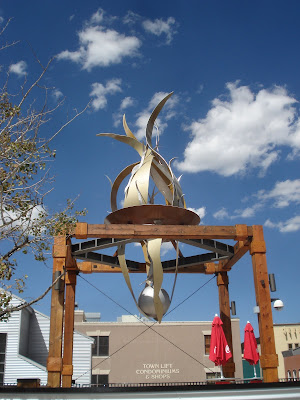 We mosey'ed around old Park City, taking in all the art galleries and ski shops. The sculpture above commemorates the Olympic meeting in PC a few years back. 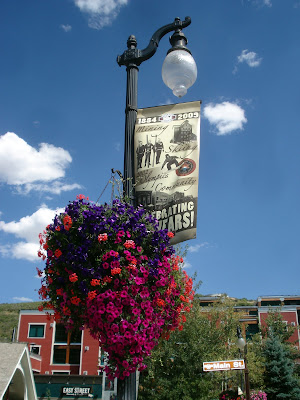 Park City was founded in 1884...they are celebrating that fact. 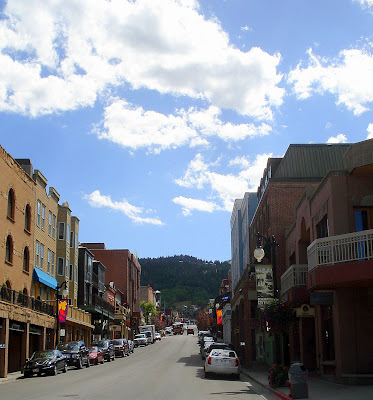 Nicely non-packed old PC. You can hardly move through town during the Sundance film festival, or during ski season.
So now it is 3:30 on Wednesday. The cats are being feed, the bonsai watered, then we will head back up the hill and probably go on the Alpine slide.
Catch you later!
Posted by Thoughts on Life and Millinery. at 3:01 PM

How fantastic that it is close enough to come home to water the bonsai . .

Oh it looks wonderful. I can't believe how much room you have. . it made me a wee bit sad to think that I am here and you are there with empty space.
When are you planning on going next year . .(said in a pretty please voice. . .)
It is so nice that your kids came up to see you .. (love the jackets and the smiley girl)

Enjoy the rest of your time up the hill.

Wow. Nice digs!
And as always, the landscapes are breath-taking.

I wouldn't say that no one wants to come stay with you! Even Doc was disappointed that this particular trip didn't work out. Now we've got to re-think things.

I have two timeshare weeks "in the bank" - I should see if I could exchange for PC. We do already have the plane tickets, after all...

Sounds and looks perfect Jill!
I love close to home vacations! Rachel and Jeff were in BC ?? Vancouver? what did they think of our province?
I do love Rachael's jacket!

So you weren't entirely alone the whole time - you had kids come visit. That is special company!!

Wow...the timeshare looks more than adequate! So glad your kids came to enjoy it with you. We have enjoyed our timeshare over the years. Ours has resorts all over the US and a few here on the west coast of Canada...so we have checked out lots of neat places. Enjoy your time in Park City...it sounds like a lovely vacation spot.

I quite like Rachel's jacket. I bought a similar one this summer...in off-white.

I loved those jackets. At least they sport the right ones for 2010.
Isn't it fun having time shares? It gives so much opportunity to travel and exchange.
I just finished checking out to see if Whistler was really ready...It's going to be amazing.

loved the pics, and the time share looked great! we are in a time share in lake tahoe right now, and your kitchen is MUCH bigger than ours, and yes I still do cook sometimes, this one has NO stove or cook top. so we bbq'd, worked well! thanks for sharing.!