Before and After: Hall and Stairs

I used to think redoing a hallway would be no big deal.

How hard can it be to redo a hallway anyway?

The BEFORE shot of our hallway: 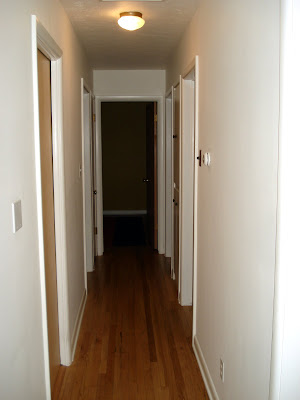 It looks perfectly nice, doesn't it?

A tad bland just painted white, but otherwise quite fine.

You'd be surprised what can be done in a hallway. I know I was surprised while it was all happening. Not only was there renovation being done on the hallway, the hallway was also being used as a messy construction storage area most of the time.

The floor was constantly covered with old carpet, sawdust, random nails and screw, bits and dabs of stuff everywhere.

It drove me nuts plowing through the mess every day. 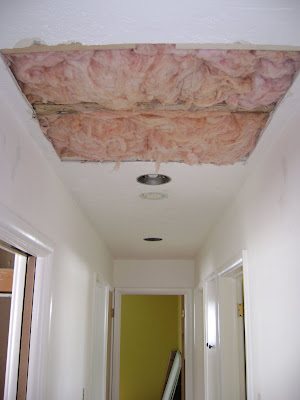 There was a leaky swamp cooler vent at the beginning of the hallway. Swamp coolers are actually very energy efficient and environmentally sound. They work great up to a point.

Once it gets too hot outside...all the swamp cooler can do is just make the hot air more humid.

We debated...and decided that this was the time to go with air conditioning.

So I lived with a pink fuzzy ceiling in the hallway for awhile.

The single light was replaced with what is decidedly not mid century style: can lights.

Oh well. The can lights work well, and stay clean.
That's all that really matters in a hallway anyway. 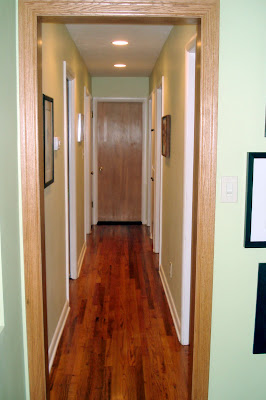 The original flooring had never been refinished. It was in beautiful condition, so we had it sanded, stained and sealed. Now it looks fantastic.

To cover the bland white walls (which a peek under the original thermostat showed to have originally been painted Army Green!) I selected a Sherwin Williams paint color called "Celery."
The paint color really is pretty close to the vegetable color, and is just a few shades lighter than the Sherwin Williams color Shagreen that we used to paint the living room. (In the picture it looks more like a yellow orange...it isn't, think green instead.)

We "nailed" it on the first try. No second guessing the choice, except that I'm now tempted to use the same color in the guest room. And maybe the master bedroom, downstairs, everywhere.
Celery is a great color!

A couple of prints and paintings were added, and the hallway was transformed for good from construction chaos to a pleasant place to enjoy a bit of art. So much nicer!

The oak trim around the door frame leading to the hallway will eventually be carried through the hallway as well. We have purchased the moulding already; it is stained and sealed and up in the rafters of the garage right now.

Between the cost of having it installed and the agitation of having men coming and going randomly through the house during installation...well, let's just say that for now we would rather have the money and the privacy rather than the moulding installed.

Bernie knows how to install the trim, and whenever he feels like he wants to tackle the project will be soon enough for me. Or at least that's what I'm saying right now. 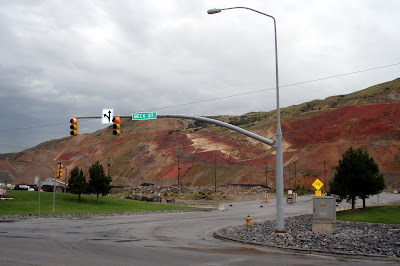 (Thought I'd insert a picture I took of a hillside with an amazing collection of colors. Isn't is interesting to think of all the colors that are hidden in the earth?) 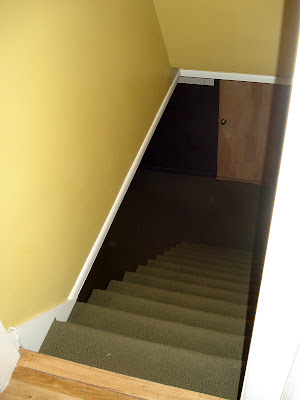 As long as I am covering the hallway, I might as well share about the stairwell right off the hallway. Originally it was painted a rather vivid yellow with drab army green carpeting. 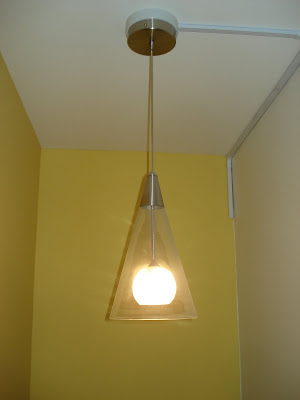 A modern light fixture gave some light...the fixture was more interesting than useful.

You can see the vivid yellow paint! 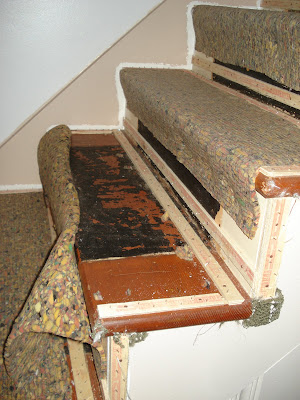 In mid February, just before we moved into the downstairs area we had the carpeting re-done downstairs, including the stairs themselves.

The plan was to re-carpet the stairs with the new carpeting, believing at the time that the stairs treads were just construction grade wood.

As soon as the old carpet was pulled up, I changed my mind.

This was GREAT news for us; the narrow treads had concerned us before. 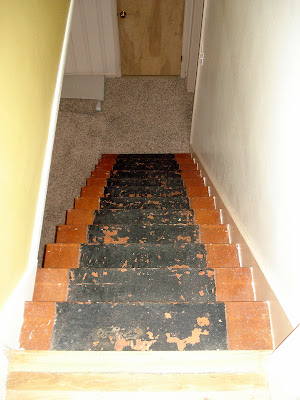 And so I got to live with stairs that looked like this from February until June 12th...after we learned that the black stuff that had been used to either anchor prior carpet or to prevent slip probably contained asbestos...which meant refinishing the treads was not going to be an option.

FIVE months of looking at this slummy staircase.

It made me feel like I was a ghetto dweller. Would I ever live in decent surrounding again?

We told our contractor that it was not negotiable: the stairs HAD to be done before our son's SLC post wedding reception that would be held at our house. Knowing that our contractor used a calendar system that clearly was different from ours, we told him the reception was June 6th.

He tore out the stair treads June 5th, and left us with out treads at all.

Great guns in the morning...we were in shocked disbelief. What if the reception really was the next day??? As it turned out, he did manage to put the stairs treads in place two days before the actual reception, on June 11th. We did a lot of tongue biting over that bit of timing.

The cats did a lot of leg crossing during that time...Tiggie for some reason could not or would not walk down the stairs without full treads. Bernie had to carry the poor guy down to his litter box every morning and again as soon as he got home from work.

Poor kitty...both cats did remarkably well with all the chaos over the six long months. 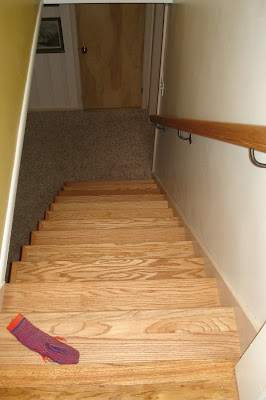 Lovely new oak treads AND a handrail at last. Did I mention that for five month there was no handrail in the stairwell? That I braced myself by pushing against the walls as I went down the steps?

Ahh...the little details of things that are taken for granted until they are gone.

I may be the only person around who walks down a short hallway and a stairwell and thinks "Man, this is just GREAT!"

Funny how living in a construction zone will change your thinking like that.

Still there. We've gotten used to them, and now actually we kind of like them!
Posted by Thoughts on Life and Millinery. at 9:40 PM

Amazing what a difference a little lighting and paint can make...and living with something for long enough almost makes it acceptable (I'm thinking vivid yellow paint and that stairwell pendant...NOT the icky gummy black stair treads).

Everything looks fabulous! And, yes, SW Celery is a great color. Hmmm. I still have one more room to paint...

Amazing difference Jill .. I had to laugh. . does your hallways not look just like mine. . with a few extra doors. I would like the doorway that leads to the daylight basement. ..which I also don't have.
You have done a terrific job. . .I like the celrey too.

My goodness you have a gift of redecorating! Well done!!!!!!!!!! I can't believe you didn't bail down the stairs without the railing. I should have come over and helped you out with that statistic. I'm terribly clumsy. I do love how you've restored the hardwood in the hallway. Beautiful.

The transformation has been fun to watch!
So happy for you!

Jill, only you could write a post on a hallway and stairwell and have me fascinated to the last word! :-)
They look great refinished!!!

Are you going to invite the original owners back to see how you transformed their house?

You sure have an eye for decor.
It's funny how once you start a project there's always the next one...Right now..I'm thankful for my flagpole. That was a long time coming.
We redecorated an old rental this winter and used similar decor for the stairs. It looks so sharp.