Before and After: Master Bedroom

The Master Bedroom BEFORE: 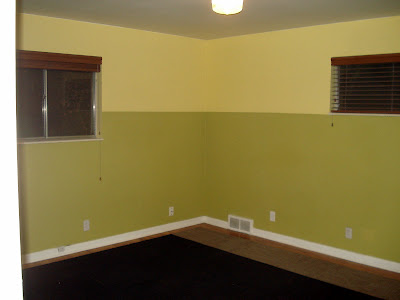 Master bedroom, in the front of the house. Yes...another room with two tone paint.
The "area rug" is made up of black carpet tiles. Ugh.
At least the tiles have protected the hardwood floor from scratches. 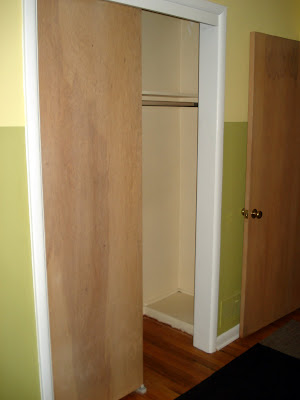 The room offered a single six foot long closet to share. We had been sharing a six foot closet in the apartment four months; we could do this...
(and use the closets in the other five bedrooms for rarely used or seasonally used clothes) 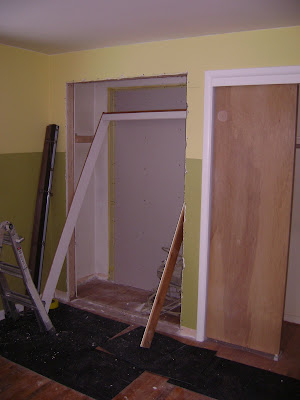 But...as it turned out it was easy to take the closet from the small bedroom on the other side of the wall, and make it into our second closet. 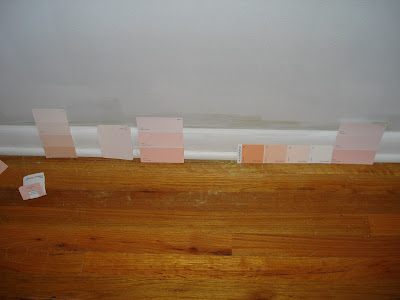 Once several coat of primer had covered the vibrate avocado and yellow walls, it was time to pick a paint color. I knew I wanted something close to peachy pink, thinking along the colors of a blush wine. 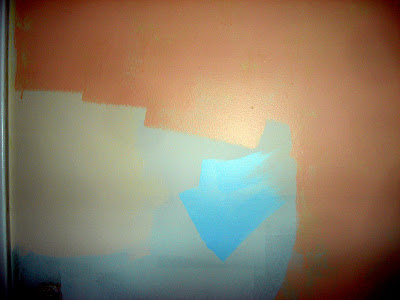 There was a brief flirtation with blue too... 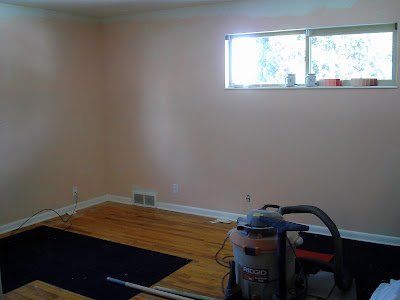 For quite awhile the room was accessorized with a shop vac.
Isn't that a romantic touch to a master bedroom?
I can truthfully say that artistically it sucked... 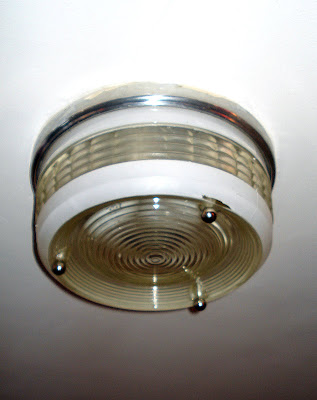 The overhead light fixture puzzled me. It looked like a kitchen fixture, and fine '50's style one at that. But in a bedroom?
Um...it just didn't tip my apple cart as the saying goes.

AFTER:
We moved into our master bedroom in Mid-March, the day after our furniture arrived. 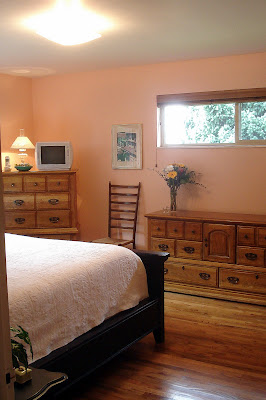 The vivid pink is actually a coral, according to the Sherwin William name: Koral Kicks. It is a typical '50s bedroom color, but get this: the same color used to be used on the doorframe and other wooden places on the house exterior. Blink! Hard to imagine with brick!

The windows still needs curtains...and I am still thinking of a large black and white check, but for now it is good enough with the wood tone leveler blinds. 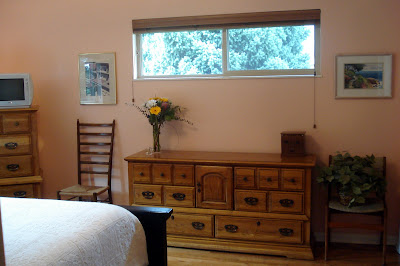 Bernie and I bought our oak bedroom set just before we got married 32 years ago.
The little ladder back chair with the woven rush seat is an antique that my mom got at a garage sale and refinished. The chair with the plant on it is a teak danish modern piece that I got here at a thrift shop for $5. I want to recover it, but for now it is a good sturdy chair.
There will be close-ups of the two pictures later. 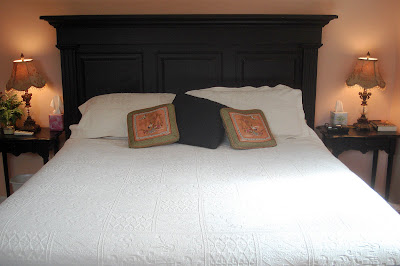 I still like our bedroom set very much, however we have since changed the matching headboard to one that accommodates a king sized bed. We started with a queen sized bed, and it took years to find a bigger headboard that we like. We had only purchased one nightstand originally, later we found the two small black tables to compliment the new head board. 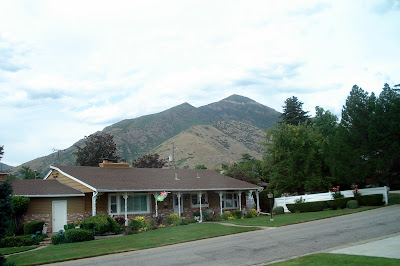 This is the view out of the narrow window when you are standing. We almost never pull the blinds as the windows are at chin level, and you'd have to push into the bushes in front of the house and stand on a small ladder to see in.

From the bed the view is to a mountain side. We loved waking up and seeing it covered with snow in the winter.

The two original 1954 closet doors. Aren't the patterns in the wood panels interesting? 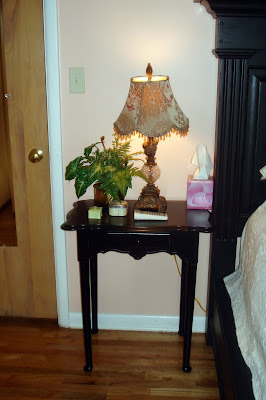 My night stand. We are just using lamps that we had in the entry way in Houston, they aren't "just the thing" for this room, but they work for now and are kind of cute anyway. 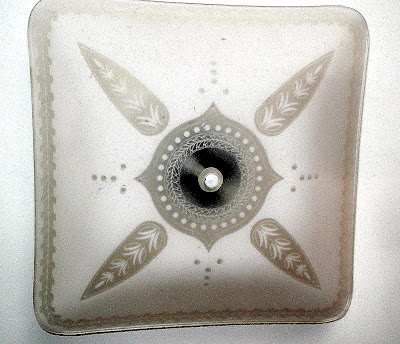 The kitchen light fixture got replaced with this diffuser after B. installed a different style of light fixture. Pictured with the lights off. 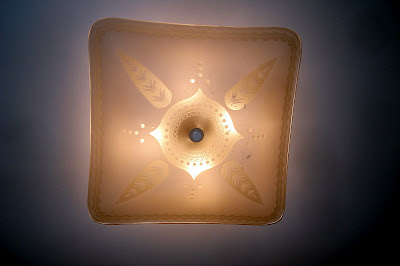 Lit up: It has a lovely pinkish glow!

Good old Ebay...it is such fun to find retro ceiling lamp shades for a song! 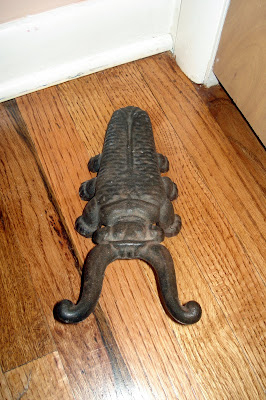 More details: Bernie's grandfather's boot jack works to hold the door open. We leave the door open during the day, and want to make sure a breeze won't slam the door shut and lock the cats in by mistake.

I only stub my toes on it occasionally...

An old oil lamp that has been wired for electricity that my mom or dad got for me somewhere years ago. I found the cut work shade in La Mesa, Calif. years and years ago...that was the town where we lived for 14 years, and where Bernie grew up.

The little bird belonged to Bernie's grandmother, the one who owned the Japanese art. The bowl was a student art project at the college I worked at in Houston, and the bird eggs were from a nursery in Houston.

I find having accessories gatherer over time become a lovely way to remember people and places of my life. 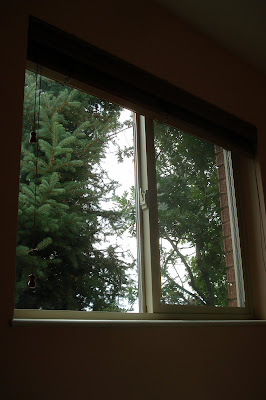 The other window in the room looks into a fir tree and a scrub oak. The oak will turn beautiful colors in the fall, and fir tree is lovely covered in snow.
While the slope of our lot makes this a second story window, it still feels more private having the trees break up the view. 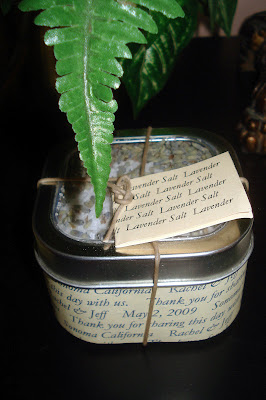 More details: on my nightstand is a box of lavender and Salt Lake salt that was a gift to each guest at our son's wedding. You can see Jeff and Rachel's name and wedding date wrapped around the box...the inspiration for the gift was lavender to represent the Sonoma area of their wedding and Salt Lake salt to represent the town where they met and would live together as husband and wife.

The idea is to use the mixture in cooking. I doubt I will ever do that...it is too special just the way it is. 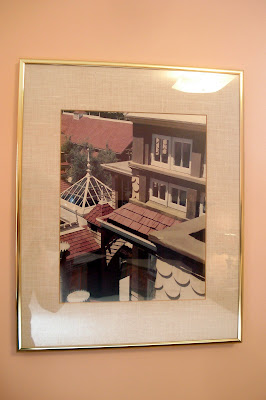 The picture over the ladder back chair is a photograph taken by Bernie at the Winchester House in San Jose. He took the picture during a family vacation, and I like it so much I had it enlarge, matted and framed. Little did we know when we visiting San Jose that we would later move there. Funny how things turn out. 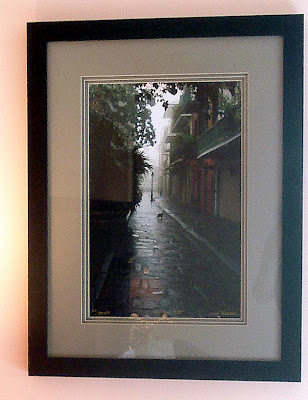 On a trip to New Orleans Bernie and I were walking down a street in the French Quarters, and both of us glanced at a display of framed photographs in a shop window. We walked about a quarter of a block more before we looked at each other, and turned back to show each other the same picture that had caught our eye. We decided to buy it on the spot; it caught the mood of the French Quarter that pleased us most: a misty foggy morning before anyone is up and about. The lone cat sauntering home in the mid ground of the picture sealed the deal for us.

I can't wait to visit New Orleans again. Especially during the Christmas season...anytime in December it is just the best! 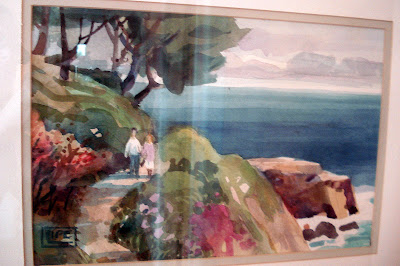 (I wish I could have taken this picture without the glare on the glass....)
The last picture is quite special as well. A woman who attends the church I grew up in is the artist. Georgianna Lipe began as a medical illustrator, and later focused on scenic watercolor. Over the years her pieces have become well know and much desired in the La Jolla community, and the paintings presented at a yearly show are quickly sold at even as the value of her works climb.
My parents purchased this painting as a special gift to us. It is of a walkway above La Jolla cove, with a couple that look a bit like us enjoying the view and the time together. My parents said it reminded them of us...and it brings us a memory of home each time we glance at it.
Turning a house of any age or condition into a home is a process. Adding accessories and memories from the past is part of making a room feel homey. We've only inhabited the master bedroom for four months, it still feels quite odd at times...we've never had our furniture arranged like this, there was no room for the mirror above my dresser, never before had hardwood touch our feet when we slide out of bed.
Eventually it will all become familiar. Eventually we will make memories in this house too, which will knit together with memories of other places, and will make this house become a home as well.
Posted by Thoughts on Life and Millinery. at 10:38 PM

Nice! Your master BR turned out really nice. I cannot wait to get ours finished (we're waiting till the master bath reno is finished).

A few of your photos wouldn't load. I'll have to check back later for those.

You've created a very lovely room. How great to see the mountains when you wake up in the morning!

Jill, your master bedroom is lovely. The color you selected is so similar to ours. . .I was looking for a old fashioned pink beige when I went to the store. . .and I think ours is a bit softer. .but I wanted the 50's look as well.

I'll be back later to check for the other photos.

The salt gift for the wedding is such a wonderful gift. . .what a smart couple they are.

I love seeing the 'before' and 'after' pic's. Your bedroom is great...may you enjoy it for a long time to come!

I love the old light glass! It's perfect!

It was definitely worth coming back for.

One of the things I really enjoy in life, are before and after pictures of room decor. What an amazing difference you created!! Your new room looks so warm, cozy and inviting. I smiled to when you mentioned that the closet doors were from 1954...they must be so old(just like me). I like the paint shade and the lighting. Great post!!

I dated Georgiana's grandson in college, so I had the privilege of meeting her. One of her signed prints hangs in my son's bedroom. It was a gift from her. She's precious.