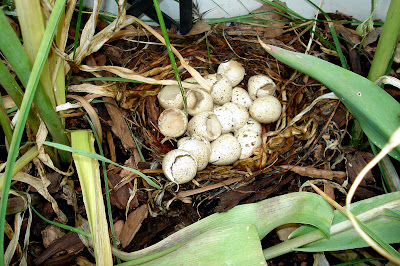 Oh was I ever jealous to learn that a California quail had nested in Jeff's flower bed while he was on his honeymoon! I saw pictures he took of the little mama on her nest...and was eagerly awaiting the news of fluffy little baby quail exploring amongst the flowers. 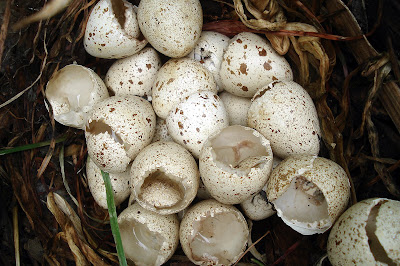 The big day came...Jeff watched the babies hatch, got some pictures...and then as he put it "Rachel scared them away."

She adamantly denies this...but as soon as the chicks hatched (I believe there were sixteen eggs, and a few didn't hatch and a few chicks didn't survive) Mama bird moved her little family somewhere else.

Somewhere without a big old Iraq gray cat...and people going in and out all the time. I'm sure Mama Quail was pretty dismayed to learn that the quiet garden had only been a temporary state of affairs.

There have been lots of Mr. & Mrs. Quail couples around our neighborhood this spring, and I am hoping that a least of few of them will eventually take their families for a stroll through our garden, just to modestly show off their adorable offspring.

(Jeff has a history with rescuing baby quail, you can read about it here. Recently he rescued baby ducks that had washed into a storm drain too. Yes, he is a legend in the avian world...) 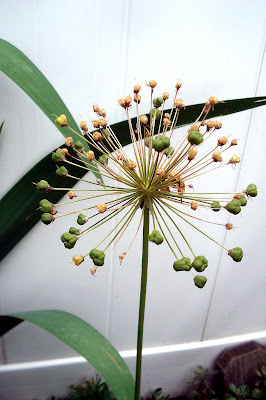 In other garden views: the pods left behind from the blue Lily of Nile bloom. Nice structure! 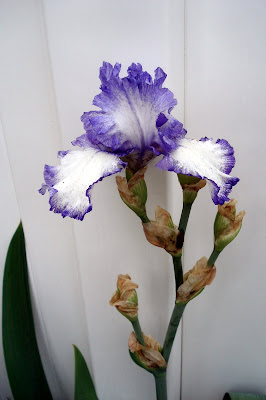 A blue iris, with spent blooms also adding their beauty to the view. 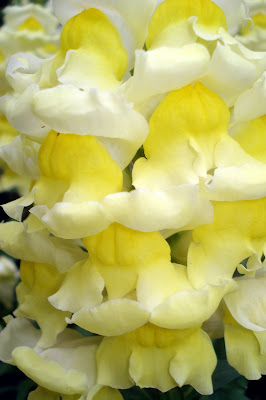 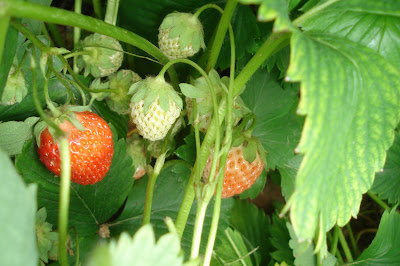 White, pink and red strawberries demonstrating riping progression.
Jeff brought a large ziplock bag full of his strawberries to us the other day. They are a small variety, with abundant fruit; his two plants are providing more than enough berries for them, and are sweeter than any of the large berries being offered in the stores.
Ummm...berry season!
Last night I went to bed right after work, around 6, and slept until six this morning. Maybe I will finally stop being exhausted from all the preparation work I put into the party.
Maybe this weekend I will finally just be able to relax and enjoy being home. (Especially if it will quit raining...this has been an amazingly rainy June according to all reports. I am hoping for an equally amazing wildflower season because of it.)
One thing I really do need to do around here is read all my new appliance manuals. Especially my microwave oven, that has more options that I can understand and works as both microwave and regular oven. Frozen pasta meals remain brick hard, while frozen chicken comes out wonderfully moist and tender. Clearly I am missing some technical detail!
I am also missing a new rug. The fabulous orange rug was to arrive in 7-10 days. Yesterday I called the company we ordered from, and quizzed the person on the line.
When we ordered, we had explained that we had already spoken to the company who is the vendor for that rug and that they were TOTALLY out of the rug...and that we were interested in ordering the rug from the company in Oregon ONLY IF they actually had the rug in their OWN warehouse.
We were assured that yes indeed they did own that rug, and that it was in their own warehouse, and it would be shipped immediately.
Yesterday's conversation revealed that actually they don't have their own warehouse, that instead they order from the rug vendor (the folks who we know are totally out of the rug...forever....) and that they were sorry for the mis-information and would refund our money.
Fercryinoutloud.
What is wrong with people these days???
So we are back at square one on the rug hunt.
Except I just don't feel much like hunting right now.
In other news: Our contractor has now removed all his tools from our garage....a clear sign that at last all work is DONE!
Well, almost done. The heated tile system isn't working...he'll still have to trouble shoot that before getting paid.
Every room still has one or two little details that we personally will need to address.
Maybe someday I will have the energy to actually want to do something about those little details.
But for now...I happy with things just as they are.
Posted by Thoughts on Life and Millinery. at 6:28 AM

OH boy! No more "get up quick so the contractors don't walk in on my shower" and tools everywhere!
Congrats!
And I do give seconds to "What is wrong with people?!?" Seriously.
Enjoy! This weekend should be thoroughly enjoyed

I came home one afternoon to find a pair of quail strolling across the driveway. They went around the corner of the house and I haven't seen them since. :(

YAY for the tools being gone!
BOO for the rug being unavailable!
YAY for getting lots of much-needed sleep!
BOO for still having a few little details and bugs to work through.

At least you're pretty much finished...we still have one big project to go.

Quail? Birdies? If it wasn't for that darn Iraqi Cat, I'd come over to inspect things.

Like a little kids who's all tuckered out .. .that is one long sleep and clearly demonstrates how exhausted you are.

Hooray for the tool man to take his tools. . and I hope he gets the heated floor sorted out . .. I recall being quite nervous when Terry installed his own in his shop. ..when the concrete coverd the pipes. . .it seemed rather .. . no going back .. but of course . .you hired a professional and it should all work out. . . in the end.

Yeah! Service is a thing of the past, it seems. Had to take little Poco to the Vet to repair damage done by PetSmart groomers. Never again!