I've mentioned that I can hear church bells from our apartment from the Greek Orthodox church on the west end of town, and that I also hear church bells as I walk from my car to my office at the other end of town (a three to six minute drive, depending on how I hit the traffic lights.)

You might recall the picture I posted the Catholic church towers in the snow fall. In that post I mused that I hoped to go inside the Cathedral some day.

Well, last Wednesday turned out to be the day.

I needed to hike up the block on a work related errand, and since I need to get some addtional exercise to clear my mind...I decided to cross the street and pop in on the Cathedral of the Madeleine on my break. 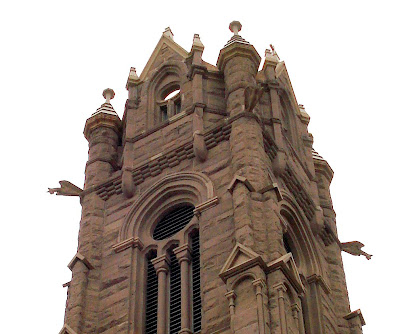 Yes, those are gargoyles peering out from the sides of the building.

Cheery little gargoyle, huh?
The church has a total of eight of them guarding from the four corners of the two towers.

(I managed to "borrow" this close up image from another blogger who was visiting from Texas...figured she wouldn't mind being neighborly to another ex patriot Texan...) 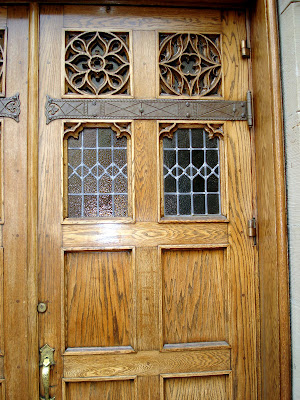 The front door is unlocked, but the one I entered wasn't the only one.

I'd love to know why the two circles are designed to be different.
They must have some special meaning, don't you think? 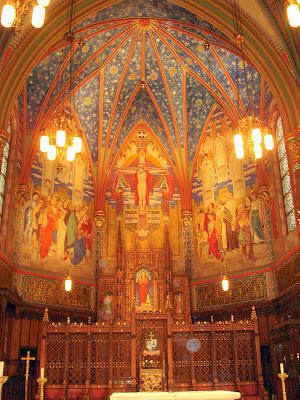 A woman was kneeling in the aisle. I thought she was having a moment of reverence, but it turned out she was setting up a shot with her camera, and her head was bowed as she figured out her camera settings. 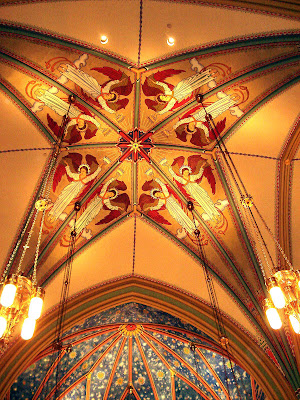 The church broke ground in 1899 and the Cathedral was completed 10 years later, at a cost that near broke the 3,000 Catholic congregants, although most of the funding came from wealthy local mining operators.

I thought I recognized the art style as coming from that decade. It is so similar to the cover art of books published during that time. 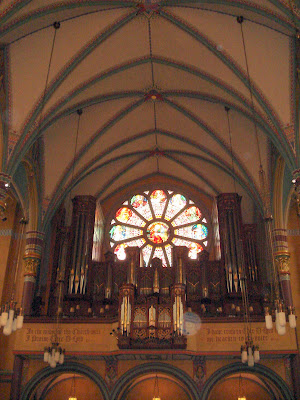 The big window that graces the front of the church as view on the outside seemed rather minor compared to the organ pipes.
I found it very comforting to see the Scriptures written out.

I miss seeing that touch in modern churches. 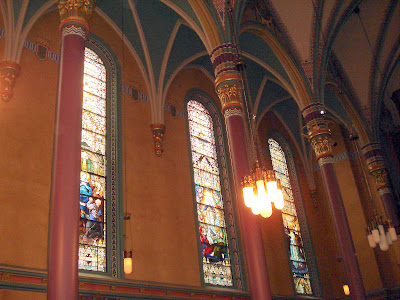 I sure wish my camera did better with the far away shots...
And that I had taken a picture of the baptistry in the entrance. It was deep enough to submerge an adult...and I had always thought Catholics were only into the sprinkle baptism. 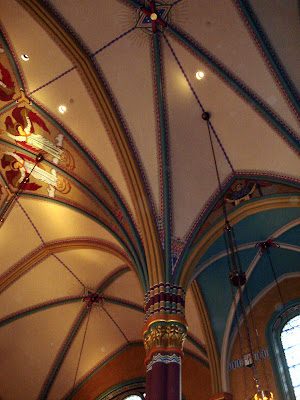 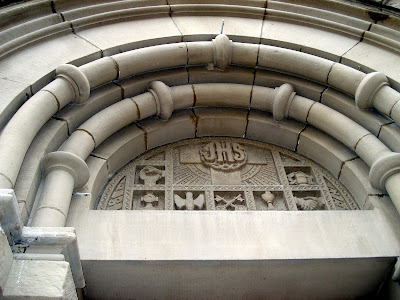 The Cathedral was lovely, even on a rather ordinary Wednesday early afternoon.
And while I am not Catholic, our shared scriptures and foundational faith was evidenced in the art and beauty of the place.

Well worth the walk, and I'm sure I will drop by to reflect upon the images on occasion there again.
(Probably when I have visiting friends with better camera than I have!)
Posted by Thoughts on Life and Millinery. at 6:26 PM

Wow...beautiful! I love church architecture...especially the cathedrals. I think the stained glass art is my favorite, however.

How nice that you were able to take a little detour during a work break!

oh wow!I'd love to see the inside of that cathedral. I feel very much a country mouse here, haven't ever seen the inside of any cathedral. . .a little untravelled. I think you did a great job with your camera.

I've seen a tremendous amount of churchies, especially in Europe, Notre Dame in Paris, Westminster Abbey in London etc, but the "worst" ones were in Venice, Italy!! The St. Marco Cathedral was completely in 24 carats gold, all the paintings on the walls and ceilings, even on the outside walls were golden! That is WOW!!! Looks adorable, but..what a waste!!! Not to mention the smaller palaces and churches!! You should see it all before it's history!
They are doing a huge job trying to keep the town floating, but we'll see; not many people want to live in a place with such a big humidity and mosquitoes like that. But in a sad way ..it's so beautiful! Sorry, I get so sentimental. But the good news I heard today was that your house is sold (my daughter was there just when I talked with her!)
So,good luck with house hunting! And by the way; it was snowing here today as well, but it was so wet, luckily!! Tomorrow my daughter Jannica is coming back from Houston, Texas! How I miss my daughters! Miss your Laura as well, she is a great personality!!
Love from Stockholm, Sweden. Pia

Sooo beautiful, Jill!
I was surprised too by the large baptismal tank... I did a quick google and found that the Catholic Church changed from immersion to sprinking in 1311 AD.. but then I found this on Wikapedia .. interesting, no?

In the Roman Catholic church, especially after its Second Vatican Council (1962-1965), greater attention is being given to the form of the baptismal font. Currently, the Roman Catholic church encourages baptismal fonts that are suitable for the full immersion of an infant or child, and for at least the pouring of water over the whole body of an adult. The font should be located in a space that is visibly and physically accessible, and should preferably make provision for flowing water.

Thank you for taking us inside this beautiful church. I wish there were more such churches around.