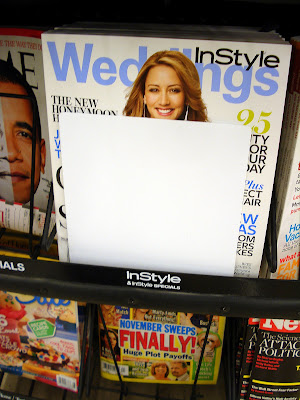 At the Smith's grocery stores, (in fact, come think of it, all the Salt Lake City grocery stores that I have been to so far) the magazine racks at the check out stands have blank out boards placed over the covers of some of the magazines.

These boards, (I think) are to shield innocent eyes from the magazines with lurid headlines, or sexually provocative article titles.

I can't say for sure though. I looked at the Instyle Weddings magazine cover, and I didn't see anything that I found the least bit titillating.

Maybe I am just used to the idea that weddings are followed by honeymoons to nice places. Is the word "honeymoon" too explicit of a word for what most newly married folks do after the wedding? Or like me, maybe someone thought that it is the wedding and honeymoon costs that are obscene.

As to the other magazine covers...maybe I am no longer easily shocked after years of life in Southern California, and living in college dormitories.
Or attending women's Bible studies for that matter.
(There is an awful lot of stuff that goes on in Christendom that would make a soap opera writer blush.) 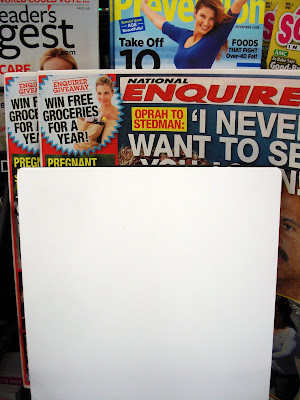 As an adult, I find my curiosity peaked by these blank out boards. If I wait in line long enough, I general find myself staring at the blank sheet, and reviewing what I knew about the publication in general. Sometimes I peek, and wind up wrinkling up my nose at what I see. Other times I am just mystified as to what about the magazine cover proved so distasteful that decent people needed to be shielded from the offending publication.

If it really that bad, why does the store carry it at all?

As a young mother, I would have appreciated this approach to some publications. Cosmopolitan has article titles that surely must be written by seasoned prostitutes. I could have done without seeing those with my 12 year old son. I've never understood that magazine anyway...why do they usually feature a woman with so deeply revealed breasts that when toddler see them, they start salivating?

Southern California has "men's magazines" out in plain sight at most convenience stores, and often right next to the candy displays. I've made a point to inform those store owners that I would be taking my business elsewhere until they rethought their merchandising.

But then sometimes I start to think that ALL woman's magazine should be blanked off.

Seriously, I detest those stupid magazines with headlines blaring "Have The Best Christmas EVER! With Our All New Recipes for 100 Festive Holiday Cookies For You To Bake!" which, of course, is right over the words "Lose 15 pounds over the holidays!" followed by "Great New Ways to Look Your Holiday Best!"

It makes me want to weep for women with such tiny worlds that such articles would entice them to buy the dribble.

Any one with two brain cells still functioning knows that you can either bake 100 kinds of cookies OR lose 15 lb over the holidays OR look your holiday best.

Any sane woman knows that those three activities are mutually exclusive.

Unless you are on crack. 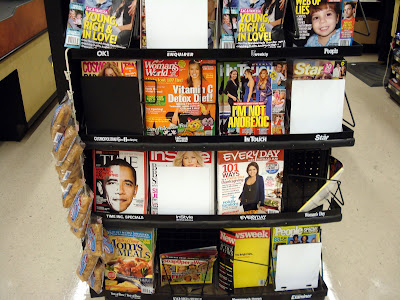 I wonder what on earth was on the cover of People magazine that made it deserve a white out screen? Cosmopolitan got a black one...is there some kind of visual cue as to what the blanks indicate?

Salt Lake City sensibilities are actually pretty nice.
It is strange to think that I actually found it strange to see that salacious material here would be shielded.
And stranger still to wonder who it was who went about deciding what is and is not fitting for my eyes.
Posted by Thoughts on Life and Millinery. at 11:45 PM

You are so funny!

You know, in that last photo, I spotted a couple of magazines that I'd probably put a blank-out board over, too.

Jill this post was read aloud worthy and it proved to be perfect coffee reading this morning. . .we both had a good laugh. Loved this post.

Wow, that's really interesting. I'm wondering if they just place those over repeat offender magazines, regardless of a particular issue's content. Seems like it only allows you to see the title. Also, do the libraries do this too?

I had a weird one today at the grocery store, along oddly similar lines. A 30 something man was in the grocery lane, apparently without intending to purchase anything, just flipping through all the women's magazines. He'd make intermittent moaning noises as he read them. Seriously gave me the creeps. These were just your typical grocery store magazines, nothing unusual.

In hindsight, I probably should have alerted the store manager. I just was so creeped out wanted to get out of there, quick.

Piqued into peeking? I wonder if it's (GASP!!) cleavage. Cosmo is noted for it. Ahhhhhh the censors. How they protect us from ...... human nature. And what about those babies nursing? How do we protect them? What a world! What a world!
K Q:-0

Those magazine articles that try to cover all the bases are a little like going to garage sales where you can buy one of everything that didn't work for the household! You read the article and wonder where you went wrong if 'living a stress free life' can be solved in just a few paragraphs. Great thoughts on this topic!