Happy first day of Fall! We had a cool rainy morning, a perfect kick off for fall weather! My mini-patio balcony garden (created on Freaky Friday) looked correctly autumnal in the gray morning light this morning. 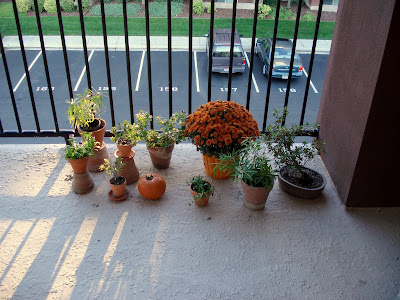 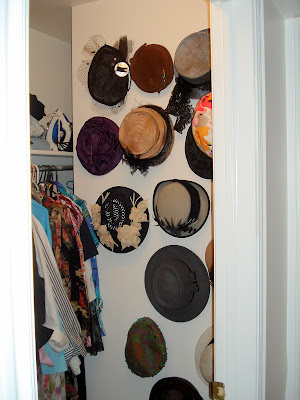 Another Friday task: Organizing my one box load of hats. I used "T" pins pushed into the dry way, two side by side, and they work perfectly to hold my hats where I can snatch one easily as I finish dressing and head off for work.
(And people wonder where they could store their hats. Don't that look great doing second shift duty as decoration inside an otherwise boring closet?)

Well, the FABULOUS Saturday afternoon news that I wanted to share was this: 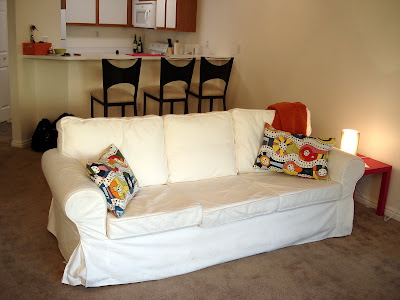 After a week of playing musical chairs between a gray plastic "leather" recliner and two folding chairs that are too small to support our backs and too hard to cushion our tushes, we now have an IKEA Ektorp couch!

It went like this: I was hoping to find an Ektorp couch or loveseat on Craiglist (read: for cheap), but I had had no luck with that.

Since we are not sure how long we will be here, we were reluctant to spend much on furniture, as we would just likely need to get rid of it when our house sells and we get our old furniture moved here, yet we also couldn't bring ourselves to buy a yukky old couch from a thrift store.

After my morning at the Farmer's Market, I drove down to Draper (a town just south of SLC) to purchase two small lamps, a basket (to hold assorted cell phones, wallets and keys that tended to sprawl across the breakfast bar), and two more lime green bowls to hold fruit and small food items.

I also was shopping for a particular duvet cover that B. had spotted, not wanting to use Jeff's continuously while we were borrowing his guest bed.

As I headed toward the check out area, I glanced over to the "AS IS" area of the store. And there it was, the exact model of sofa that I had been wanting to buy!

The "as is" meant it was a floor demo model; the washable white canvas slip cover was a bit smudged, and there was a spill of what looked like coffee on the back side. Shoot, nothing that a little laundry pretreating and soaking wouldn't get out in a jiffy. I flipped the cushions over: the back sides were pristine in any case.

I called Bernie to ask him what he though about getting it.

He was just finishing the charity golf event; he said he would have Jeff drop him off at the store.

As soon as he arrived, we measured the couch. B. had earlier measured my car interior so we knew it would fit, sort of, and then we tried lifting it to see if we could carry it...and determined that yes, we could carry it, and that it would stick out the back of the car about 8 inches.

It looked stormy out, and it was raining a bit. I said a prayer that we could get it home safe and sound, then we paid, loaded it up, tied in down, and took off on the road to home with the couch sticking out the back.

Upon arrival home I check: Not one drop of rain was on that couch!

We did make several young 20 somethings become wide eyed to see us oldsters schlepping a couch into an elevator. Let 'em stare...we've done much harder things than this in our life time!

We've even raised teenagers! Moving a sofa is nothing compared to that!

We put it in place in the middle of our mostly empty apartment, and got busy lounging on our new sofa, marvelling at what a difference it made in our sense of being settled in.

(It was difficult to know that back home we have FOUR couches, one of which we want to get rid of...and now we just bought another one! Oh well, Hello Craigslist when the time come to decamp from the apartment!)

So now we had cozy seating in a room with lots and lots of blank white walls.

Hmmmm....what ever could we do about that little flaw in our interior decorating bliss?

B. suggested I have some of my photographs blown up into posters to hang on the walls. I love that idea....but actually that costs money too. To get enough pictures to really work on such big walls, it would run into more than I was willing to spend.

Now it just so happened that while I was tidying up, my eye fell on the SLC public library brochure which happened to have a blurb on it about the massive collection of art prints (I'm talking thousands here...) that are owned by the library, and which are available for check out, for 28 days at a time. 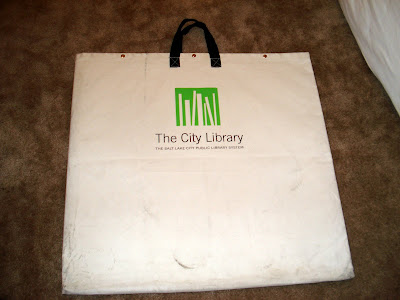 Today I headed back to the library. They not only check out prints, they also check out a HUGE canvas bag to carry your poster sized prints home in.
Isn't that cool? 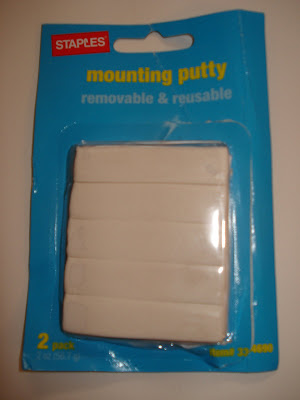 A quick stop at the office supply store to pick up a pack of mounting putty (a stretchy clay like substance that works perfectly to hold up paper on a vertical surface.)

And about thirty minutes later..... 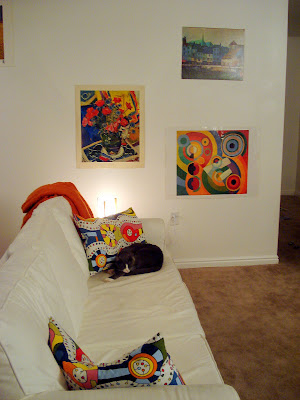 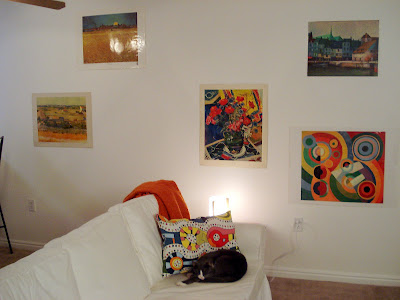 I only got 13 prints, thinking I would divide them between the living room, our bedroom and my office.

I should have gotten twice as many...the more B. and I hung up, the more excited we got about this plan: We could make our apartment an Art Appreciation Class; selecting art, researching the artists, discussing the prints, enjoying them, and then next month go check out an entirely new collection! And not a single hole in the wall to deal with.

(Only next time B. will have to go with me to the library. Those prints are HEAVY!) 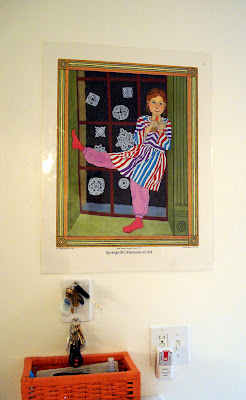 I adore this little lass.
( And think B. was very clever to just back out the screws to the phone jack so we would have a place to hang our keys!) 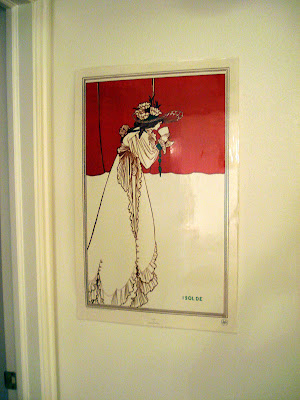 This lady is over the fuse box in the hallway. Isn't she much prettier than a gray metal door? 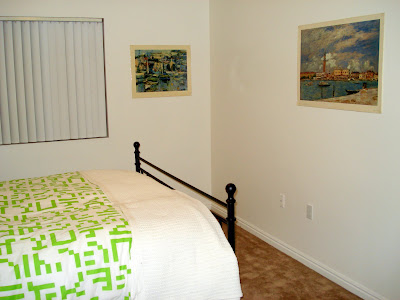 We only have two prints up in the bedroom so far. 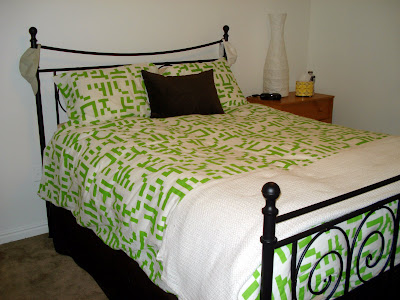 B. picked out the duvet cover: $14 for a KING sized cover with two pillow cases. Such a deal!

(Yes Laura, I can hear you groaning about my IKEA fixation....) 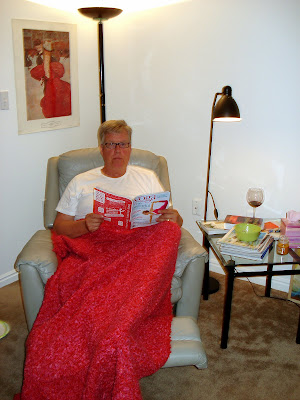 The gray recliner looks much nicer with the cherry red cheery throw that miraculously is LONG ENOUGH to actually cover Bernie from his lap to his feet and then some.
A nice mohair it is too....
A Russian painting of a man and woman skating together is a nice romantic touch to the room. 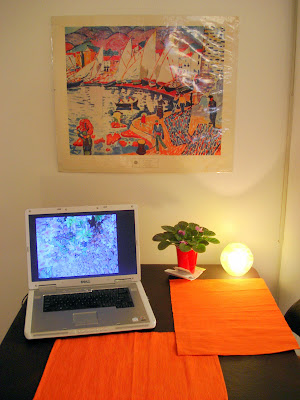 We have never had modern art in our home before. This is such a fun treat! What a change for us, and how lively it all is! 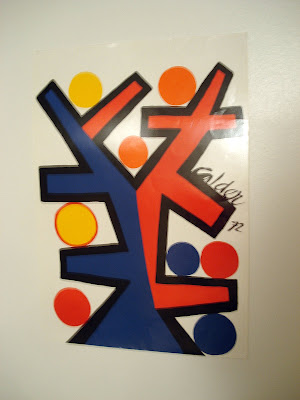 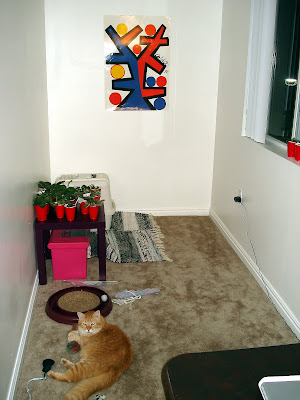 Perfect for the little alcove off the living room that we are using for the cat's "office," if you know what I mean....

Nine years ago I was working as an Art Librarian for a school district in Texas. My job was to manage a collection of 12,000 art prints, slides and books. Every day I would look at art, and I became familiar with many of the new artist that I had not studied during my Art Appreciation classes in Elementary School. (Those classes were put on by the San Diego Museum of Art; I now know they were college level course work, and I have never stopped being thankful that I had an a opportunity to study art while I was young.)

The job at the school was a daily visual feast for me.

I feel now like I am revisiting those days, and this time Bernie is able to enjoy the lively works along with me.

This is a wonderful thing!

(PS: If you know of young people renting on a budget, give them the word that almost all public libraries have art collections to check out. Spend two bucks on mounting putty, and they can have art their hearts content!)
Posted by Thoughts on Life and Millinery. at 8:39 PM

Oh! Wow! I can't believe you heard that groan all the way up there! I will have to keep to eye rolling next time...less noise.
It looks like a world of fun though.
It's good to see Tigs killing that snake. Good kitty.
Love you both.
Glad you got a couch. I was thinking of sending you mine from storage and sending your dad up to deliver it. Loves you!!!

What a great idea! It's like having your owning rotating art gallery, and being able to study each piece in depth! I remember trying to decorate the dorm walls in my college days - I bought several oversized calendars and neatly trimmed each page and hung (using putty!) each "print" in a checkerboard pattern on the walls. Much cheaper than buying posters like everyone else did.

The sofa was definitely a lucky find! Who knows - it might be a perfect addition to your next home.

Those hats on the wall look just wonderful, enough to make you smile every time you open the closet!
And I really like your sofa, but I think would never dare to get a while one... you're brave!

i've definitely learned something today! i applaud your creative solution (and cost-effective!)to decorating. you should submit that to some decorating mag. you might make some money off that idea!

That's a wonderful idea - I don't think our library has a program like that but our school always had borrowed prints for the school year - it was a program supporting local artists.

Your apt. is looking very cozy - I wish wish wish we had an Ikea here on the Island - it's a great store!

I say; you both are getting more Swedish than I have done after 26 years in Sweden!!! Wow, I'm getting very interested buying a couch like that because I'm always sitting in my kitchen watching my smallest TV, although I have two sofas in other rooms.But they are antique and I'd like to have something more comfortable,like the Ikea one you have!!
And the art collection is sooo fine,it was a marvellous idea!! Good for you!!;)))Love, Pia P.

Your temporary digs are looking very colorful and welcoming. Did you bring your Ikea pillow from Texas or buy two new ones? I do love all the color.

Looks like the cats are feeling more at home too.

That fuse box lady looks like an Aubrey Beardsley drawing...