I got my African violets trimmed and watered yesterday. AND I made dinner: Egg salad sandwiches. On white bread.

Being on a low residue diet is so weird: all those crunchy whole grain healthy high fiber items that I have always included in my diet are off limits for now. Angel food cake, white bread, rice and noodles are required instead. Weird. This will likely be changed big time in a week or so, but for now white flour reigns.

Other household members are telling me that poultry is a necessary addition to their diet. Poultry as in the feathered babies that flicker between our tree branches and bird feeders. We are not buying into this at all.

Since I am still in low speed, I'm going to let our orange cat Tiggie, (AKA "Harper Lee", am I the only one who gets this joke?) of Tiggie FOC blog here today. As we all know, he is a cat with a lot to say. So I'm going to just let him say it today and head on back to bed. 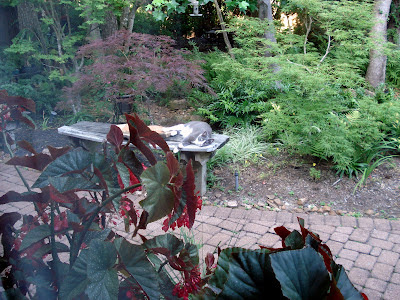 I saw Hart loafing on the bench outside yesterday. He looked like someone had let the air out of him.

He is a great hunter, but pretty lax on keeping up with his outside snoopervising duties. 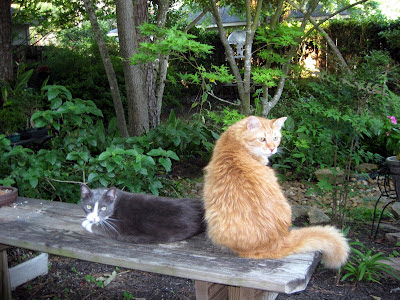 Hart is way too involved in baby bird catching. It just about wears him out racing up and leaping to the bird feeder, then running when Bernie knocks on the window and yells.

Baby birds are too easy; they sit near us and look at us like they don't know what we are. They learn though...

I personally caught a Carolina wren and brought it in to show Bernie. He was ticked off, and took the bird away from me. The dumb wren now sits on the patio chair and smirks at us.

I wasn't going to hurt it or anything; I just wanted to show Bernie that I could catch a bird if I wanted to. 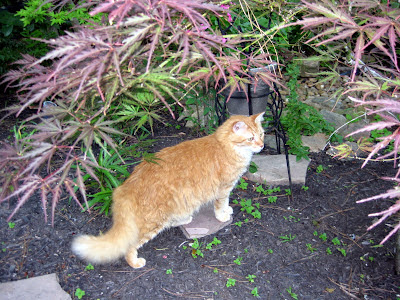 I got going on my rounds..,..everything was just fine. The raccoons had stopped by and left some trash behind, but that isn't my problem. 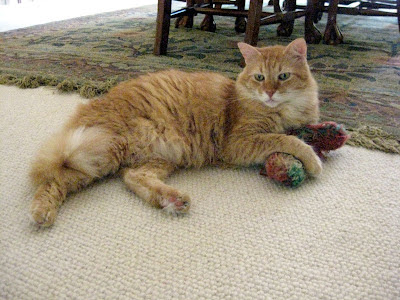 I am allowed to hunt snakes though. Inside snakes. Ones that are knitted by Grandma, and have 'nip and crinkles and bells inside.
Man can those things fight.
I have to re-kill them every day. 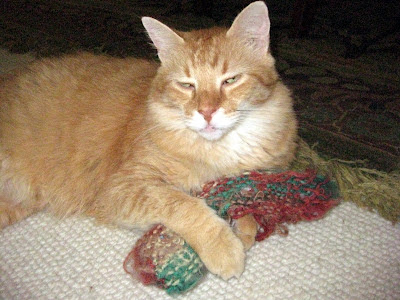 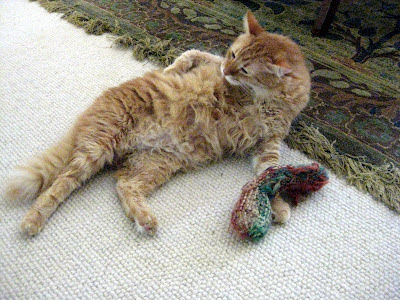 It is a lot of work killing snakes. I always work up a bit of sweat, and my fur gets all tangled up. A nice long bath followed by a good nap makes for the perfect ending to a successful hunt.
Posted by Thoughts on Life and Millinery. at 10:12 AM

Glad to see you are back at home and up to (well almost) your usual antics. Sorry I haven't stopped by nor e-mailed of late. Thanks go to Lovella for keeping me posted and praying! Hope you are back to life with great celerity!

No, you're not the only one who gets the "Harper Lee" joke...I laughed so hard the first time I read that at Tiggie's blog that I nearly fell off my chair!

What a diet! So you can eat all the no-no stuff... for a little while anyway? When do you return to the doctor?

Tiggie, your day looks much more interesting than Spooky's. She just sits with her head poked through the vertical blinds (I hate those plastic things, but it's part of apartment-living, I guess) watching all the anoles, birds, kids, and whatever. Either that, or she's snoozing. Perhaps I should find her one of those knitted snakes.

Now, Tiggie, the red-head has it right...go help Blondie with her napping!

Jill, I feel soo bad for your diet. . yikes that sounds nasty.

Scrambled eggs. . that's what you need .. .or softly poached .. or a nice simple omlet.

So, tiggie. . good job on entertaining the blond lady, keep it up, don't let her get too busy over there. Stay away from baby birds,

You inspired me to make egg salad for lunch today....but not on white bread; can't stand the stuff. I'm sorry you have to eat such a diet and hope you can get back to "real" food soon.