Anniversary of being in pieces 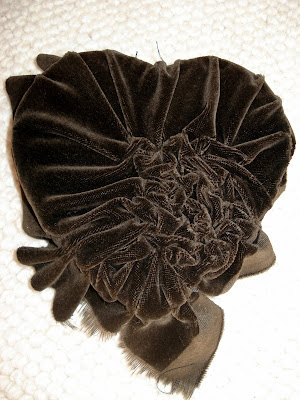 A chocolate velvet cocktail hat.
Above after ruching the top of the hat. The side of the hat is incomplete. 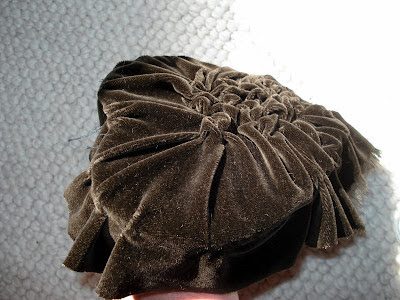 I had purchased the velvet last November; at the time I was thinking of some other design that would require less yardage. Not having enough yardage made this project problematic; the yardage was not wide enough to cut a true bias strip for covering the side. 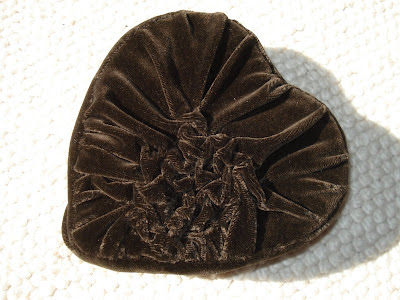 Here is the hat with the side almost bias band just tucked inside. As usual, I am now facing engineering issues: the side band is not as smooth as I would like, plus the seaming is irregular.
The red heart hat that is pictured at the top of my blog was being created on this day a few years back. It was my first attempt at making a heart hat. I had intended to have it completed for a Valentine's Day date.
Instead I found myself being discharged from the hospital on that Valentine's Day after having major surgery. The red heart hat actually is my Hysterectomy Hat.
You can read the story about that hat on my post on this day a year ago at Red Heart Hysterectomy hat 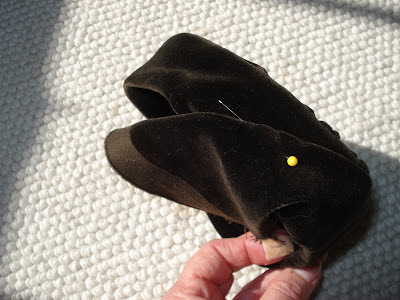 I apparently have learned little since I created the red hat. I didn't even try to use bias on the red one; I just scrunched the fabric and it turned out actually pretty cute.
I did learn from the red one to shape the edge to match the contour of the forehead.
Duh.
I made another error in this brown hat: I began edging this hat at the heart's point, and after stitching half way around the hat realized that would leave a seam at the point, at the bottom of the hat where it would be very visible.
I should of begun at the top of the hat so the seam would be at the top of the hat, in the cleft of the heart.
Double duh.
The thought of tearing it out crossed my mind, and that made me cross, so I decided instead to just make a diagonal fold on the side as a design element. Actually I like that element. 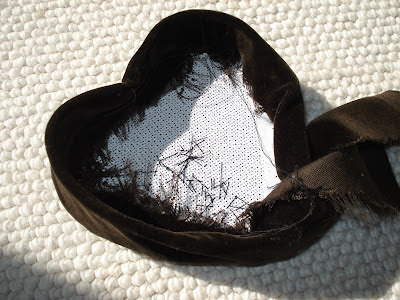 I've been sewing inside the hat, through the edge of the velvet (which leaves little brown specks EVERYWHERE!) and stabbing my needle (and myself in the process) through the buckram (the white screen like materials), trying to slide the needle between the wire outlining the tip (top of the hat) and the edge, catching a stitch in the seam.

I am sure that there has to be a better and easier way to do this.
Sewing on a curve inside a heart shape, stabbing blindly...somebody help me, please? 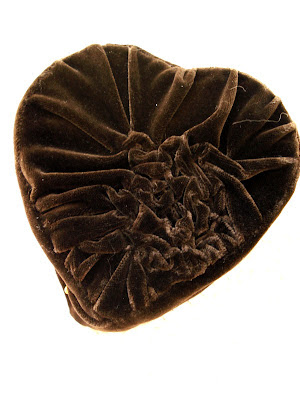 I wanted to use some brown french veiling, but it really doesn't work with this design, so I'll save that for another project. I also wanted to use beads and feathers; today I am still pondering how to attach the feathers. 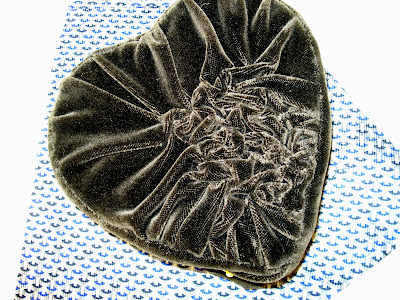 The silk lining....another "I'm not sure how I'm going to make that part work."
Anyway, this is after all a work in process. There is no pattern to follow. It is all learn as I go.
I still have about half of the side to tuck inside and attach. I've already jabbed my finger once today, and I am feeling very critical of the piece. I wish I had not worked the ruching so tightly against the edge, (working tight is always an issue for me, whether I am painting or doing millinery work. I have to remember to loosen up.)
Right now it is a gorgeous day outside.
I'm going to put it aside for now and head out to the sunshine.
It is too pretty of a day to stay inside anyway.
Posted by Thoughts on Life and Millinery. at 9:43 AM

Amazing! You are so creative!

I went back and read your anniversary post from a year ago...I'm not sure if the tears were from the laughter or the frustration or your loss. I'm glad to know there's a story tied to your pretty little red hat.

I'm looking forward to seeing how the little brown one turns out. Meanwhile, I'm with you...the weather is incredible and the outdoors beckon...

Oooh, chocolate velvet is so rich, rich rich....I see a lot of potential in this hat and am curious to see how you continue the design. Don't let it get the best of you! I know it will be fabulous when finished...

Yes, clearly with my millinery expertise, I have MUCH to say about the matter at hand.

I know nothing......except the hat is beautiful.

I love the brown velvet and the ruching design you have chosen. I feel for you in the sewing challenges. Oh my goodness how many times have I been sewing apparel and have nearly hucked it away. Keep going, it will be beautiful and I imagine perfect for your Valentine date.

The hat is gorgeous already! You are creative and brave for just learning and doing on the fly. I can hardly wait to see how you add finishing touches -- I hope you'll post pictures eventually. It definitely looks like it shaping up to be a very glamorous hat that I would llove to wear.