So...on Thursday I was riding my bike around the neighborhood after getting the mail.
I enjoyed the sunshine and the last of the colorful fall leaves shimmering against a vibrant blue sky.

I noticed one house still had a Christmas wreath on the front door, and I wondered how long it would stay up.

Then I saw this tree: 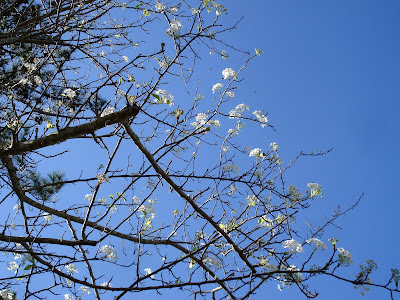 White blossoms bursting forth on the bare branches. 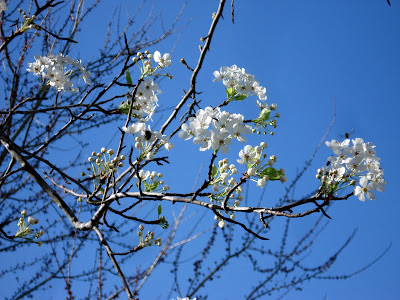 Bees buzzing from flower to flower. 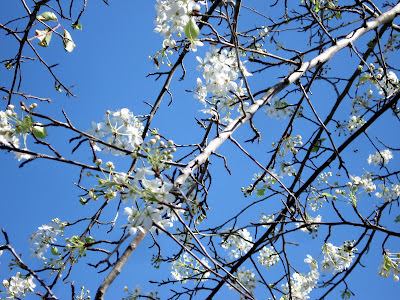 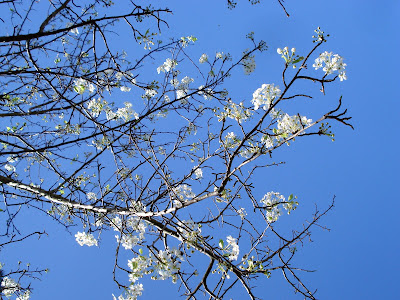 Oh COME ON...Give me a break...YOU have GOT to be kidding me!
It's not even half way through January yet!
This is just wrong.
No trees should be allowed to bloom until at least mid January... pul-ez! 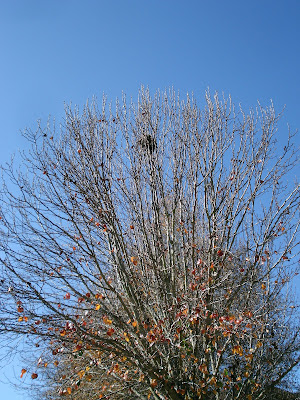 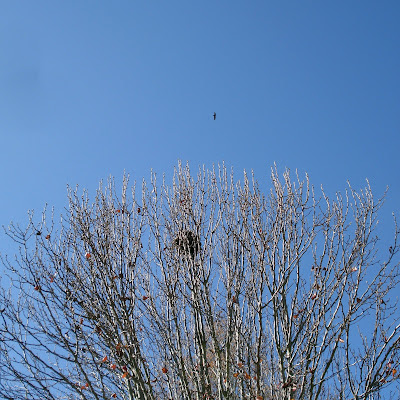 As I snapped a shot, a turkey buzzard sailed through the picture. The buzzards are usually seen gliding in circles over the forest, twenty or thirty of them at a time.

Guess this one wanted some alone time or something. 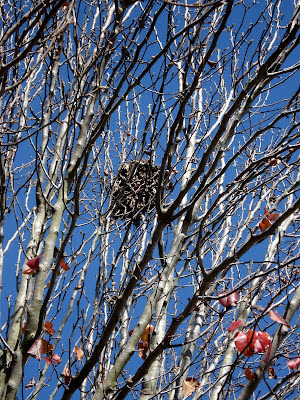 Man, would I love to peek inside that squirrel's nest. 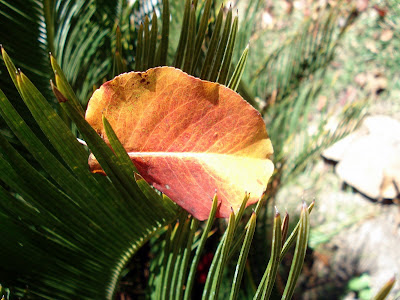 Beneath the pear tree was a sago palm tree, with a multicolored leaf wedged within it's fronds.
Later I took B. to the doctor, who said surgery is not going to be needed on his injured knee.
PTL!
Three more weeks in a brace, then rehab. It is still very painful for him, and it is difficult for him to get a full night's sleep.
Or any sleep at all for that matter, even with the prescribed medications.

Two nights ago he finally tried taking the prescribed painkillers, a glass of wine and a couple of melatonin tablets.

And then was able *finally* to sleep through the night for the first time in three weeks.
. When asked about adding the wine with the med, the doctor nodded sagely and said "yeah...I know...it does help..."
Now the three of us are enjoying sharing a nice bottle of wine each night, and exploring various vintages and types.

Definitely less side effect are likely to occur with a glass of wine than with your typical prescribed medication.
And wine is a lot more interesting to talk about too. 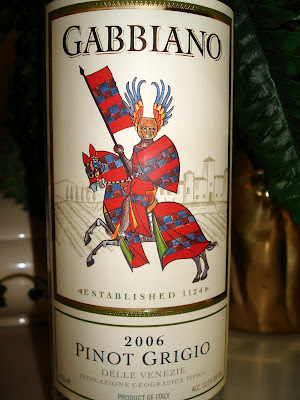 Like was this winery really making wine in 1124 AD???
On the way home from the doctor's office we stopped to get a refill on the pain management prescriptions, and to pick up another bottle of wine.
It was a tad chilly as the sun was setting, and I commented that I would enjoy having a fire in the fire place later on.
B. said "Yeah, we should probably have a fire before summer gets here."
And it took several moments for my brain to register that summer is SUPPOSED to still be six months away, yet we are already thinking it is almost here. 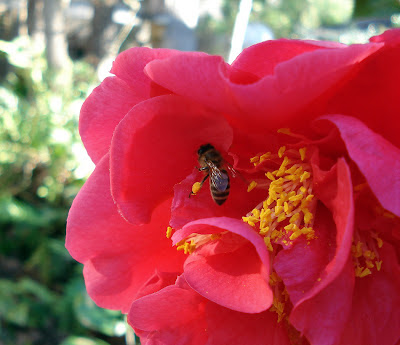 And as promised: the bee going about his business on the camellia.
Love that golden pollen anklet he is wearing!
Posted by Thoughts on Life and Millinery. at 4:08 PM

What fabulous photos - all that lovely blue sky, and blossoms too! I guess the bees are happy about it anyway.

Glad to hear that B will not need the surgery. CT has been through that, it takes a very long time to recover to "normal," even though he did walk out of there on his own power right afterwards, which amazed me.

Wine, yes, wine! A little wine is a good thing, in my book.

Jill, I have given you a You Make My Day Award. Thank you for making my day!

OH MY!!!
Do you live on another continent? How could you boast about your spectacular spring like weather when we are slogging in gum boots where ever we go? Your weather looks so delightful.
I'm so glad that surgery can be averted. Good job on the recovery efforts. Soon, he'll be joining you on those bike rides. Oh, now the jealousy is creeping back in.

Cruel and unusual punishment posting those blossoms and blue skies! Bike riding?! So, when can we escape to your utopia?
Glad to hear your cripple will not be lounging about forever. I'll continue to pray for his recovery as I am sure you are hoping to end the Nurse Nightengale scenario in the coming weeks.

Don't you just love the brilliant clear blue skies? It's been like that here for the past several days (and HOT! 82 degrees!)...until last night, when we had a thunderstorm and heavy downpour!

The photos are great...I'm not ready for summer yet, but I'm afraid our winter may be past and our spring may be very short.

So many wonderful photos. Thank you for the taste of spring. Also, hurray for Bernie and no surgery- what great news.