Blessed art Thou O Lord our God, King of the universe, who has given us holidays, customs and times of happiness, to increase the knowledge of God and to build us up in our most holy faith. 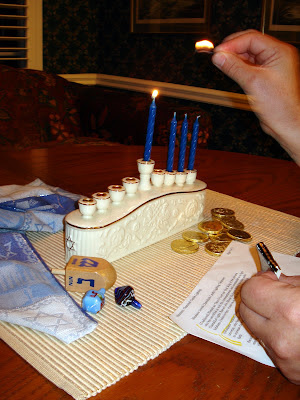 Blessed art Thou O Lord our God, King of the universe, who performed miracles for our fathers in those days at this season. 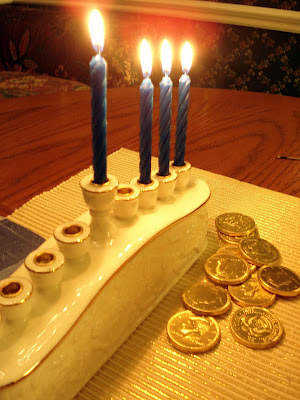 King David reminds us that God Himself is the source of our own individual light:

The Lord is my light and my Salvation (Yeshua: Jesus); whom shall I fear?
The Lord is the defense of my life; whom shall I dread? (Psalm 27:1)
For You light my lamp; The Lord my God illumines my darkness. (Psalm 18:28)

Hanukkah, also known as the Feast of Dedication; is primarily celebrated by candle lighting and prayer.
It is also, like many of the Jewish festivals, a mini re-enactment of a time in Jewish history.
A recounting of a time when the coming of Jesus was almost destroyed.

As I have mentioned before, Hanukkah celebrates a miracle.
To re-cap the setting of this particular miracle: During the Greek reign (during the 400 years between the writing of the Old and New Testaments), the Jewish people were forced to curtail their ways of worshipping God.

Reading God's Words, worshipping God, and praying to God were all outlawed.
The Scriptures were destroyed.
Jewish people were being slaughtered for being observant Jews.
Even keeping God's command to circumsize their baby boys resulted in the Greeks killing the baby and flaying, or skinning the parents to death.

The final blow came when the Greeks entered the Temple, looted it of its treasures and then desecrated it.
They brought in a sow, which the Bible said was unclean, and slaughtered it on the temple's alter.
Then the Greeks put up a statue of their god Zeus in the temple, and sprinkled it with the pig's blood.
They forced the Priest to drink the blood, and to eat the flesh of the unclean sow.
(Does "eat the flesh and drink the blood" remind Christian readers of anything?)

The Jewish people had tried to "blend in" and not raise a ruckus up to that point.
But after that, enough was enough.
The affronts were no longer to the Jews as individuals, or as a people.
The Greeks had now trashed God.

With an unclean and inaccessible temple, the Jews no longer had an alter upon which to offer their own sacrifices, pure and without blemish sacrificial lambs, among other sacrifices.

Without being able to offer sacrifices for their sins, they would have no way to reconcil with their God, according to the Laws of God that they carefully followed. 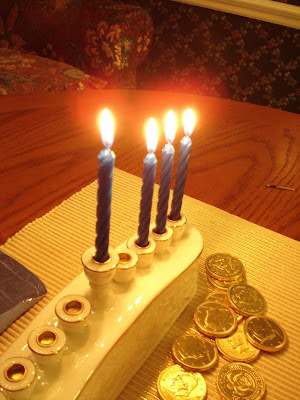 The Lamb of God, Jesus, had yet to be born at this time.

Had the Greeks been successful in wiping out the Jewish people, I would not have The Sacrifice needed to reconcil me to God either.

Here is why: The Greeks were not only making the temple's alter unaccessable, they were also systematically attempting to slaughter ALL the Jews.

Had they been successful, the lineage of Jesus would have been destroyed.

As we light the third candle, we think about the three temples that the Bible speaks of.
How Daniel, and Jesus speak of them being destroyed.
How we watch for the rebuilding of the temple in Jerusalem, the third rebuilding, knowing with its rebuilding will come another destroyer, when the Anti-Christ will seat himself upon the throne there just before Jesus returns to earth. 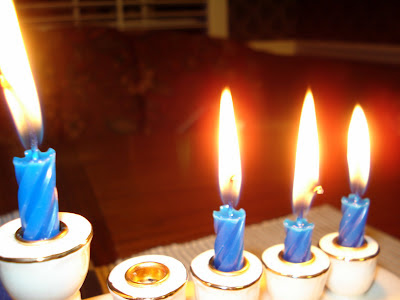 Tomorrow I will explain more of how the battle was mounted against the Greeks by an old Jewish priest and his five sons and a bit more about the meaning of the lighted candles.
*******
(I had a thought: If you wish to begin lighting candles in your own home, you shouldn't have to wait for me to post the progression. I am using a sedar or order of events, from this site. Feel free to light your own candles at your own timing if you wish.)
Posted by Thoughts on Life and Millinery. at 12:00 AM

It never ceases to amaze me how God will not be defeated . .then or now.

Beautiful, Jill. Thank you for bringing these lessons to us.