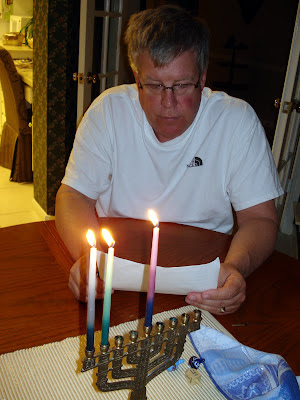 Blessed art Thou, O Lord our God, King of the universe, who has given us holidays, customs and times of happiness, to increase the knowledge of God and to build us up in our most holy faith.

Blessed art Thou, O Lord our God, King of the universe, who performed miracles for our fathers in those days at this season. 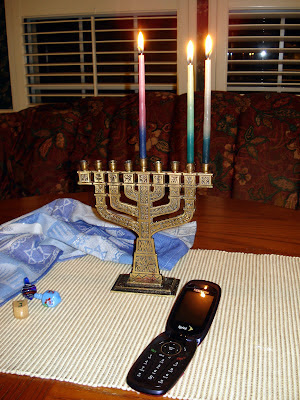 Tonight I was blessed; Bernie was able to catch an earlier flight home, so he was here with me to light the candles.
It felt good to be together, and just as he lit the candles Laura called. We put the cell phone on the table, and on speaker phone, and three of us talk and enjoyed being together.

As we read about the way God helped the Israelites as they traveled, providing light for them in day and night, I thought about my husband who travels a lot, on business and my daughter who travels to various cities as a nurse.
I am always thankful that I can call upon God to be with them and sustain them while they travel.
It isn't always easy for them. A lot of times Laura isn't sure where she is going to be assigned next; sometimes Bernie isn't sure what the flight schedules will be like.
I guess I can say we can relate a bit about needing to be lead as they travel. 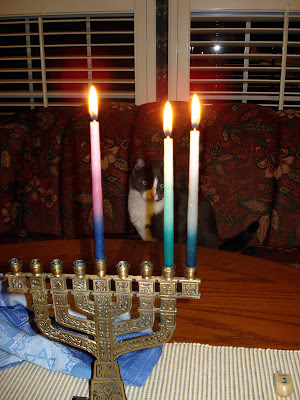 While we talked with Laura, Bernie and I spun dreidles.
***
Those are the little tops beside the Chanakkiah (candle holder)
In case you don't know why driedels come into the Hanukkah story:
While the Jewish people lived amongst the Greeks, the Greeks insisted that they stop worshipping, studying Torah (God's Word) and praying together.
Jewish law requires that ten Jewish men (minyan) be gathered when certain prayers are to be present to God. Jewis
********
(I like this: Imagine how strong the fellowship of Christian men would be if they had to find nine other men every time prayer was needed. Imagine Christian men in airports and businesses calling out: Hey, we have a prayer need, I don't know you, but will you be willing to stop a minute and pray? The Jewish men still do this; you can sometimes see it happening in airports.)
********
Anyway, because the Greeks outlawed prayer, the Jewish men knew that the Greeks would accept the explanation of their gatherings as getting together to bet on spinning tops.
Gambling was a very acceptable past time.
A simple top could be kept in a pocket, if they were gathered to pray, and someone approached them, wham out would come a driedel top, and it would be spun, giving their pray time a cover.
***
The dreidels make me think: If I was not allowed to pray with my friends in public, what could I do to get around it?
Yes, I know I (we) could pray silently.
***
But why should we not pray aloud to our God when we are together?
******
I don't have much of an answer for this question. But I am thinking about it.

And spinning dreidels, enjoying light, and enjoying being with my family.
******
(And for the record: Hart had a blast with the dreidel too. He shot one way under the couch. I'm going to have to pull the couch out to get the dreidel back. That will requrie me to get down on my knees.
Hey, maybe that is the answer: We could all have cats, and when we are on our knees praying, and someone asks, we could pull out a dreidel and say the cat shot it under *whatever* and we were just getting it back!)
Posted by Thoughts on Life and Millinery. at 8:51 PM

Hmmm...maybe Hart's purpose in life is to get you on your knees more often.

Thank you for providing more of the background of the dreidel. I've often wondered at its importance, but never took the time to find out.

How blessed are we to be in a place where we can stop to pray in public - alone or in a group - or kneel beside a sofa or even think a prayer while sitting in a business meeting.

Yes, we are blessed to be able to pray publicly with only our pride and lack of desire to pray . .stopping us.
The story behind the dreidal was so interesting. I've learned something new once again.
How special to be able to share together with Laura you time with the candles.

I did not know the dreidel story either. But, hey, I'm all for having cats. And cats will play with dreidels. And we will get on our knees because of that.

And may we also get on our knees before our Heavenly Father in gratefulness for the freedom we have to worship Him without fear of being hauled off to jail or worse. And may we remember to pray for the persecuted church around the world, because so very many do not have our freedoms and they suffer greatly for their faith.

Hart! Good for you! Play with the spinny thing. Make Blondie play, too. Just remember, those sticks with fire on top are so pretty to watch but they will singe your paw!

Very interesting post...I did not know the story behind the dreidel.

Jill,
Email me at ny.mimi.5@gmail.com.
Thanks.

Would love to know what you find out about our grandmothers' pixies. My red one has a "Japan" sticker on the bottom but there are no other hints about their origin or dates.

I noticed your very talented cat has his own blog.

Jill, laughing here with your last paragraph. Oh your mind........

Have I mentioned that I love you?
Hee hee.