First day of Autumn: A walk in the woods

Bernie has been under the weather with a horrific cold. He was on an airplane (as usual) flying from San Diego to Phoenix when he said he felt a tickle in his nose; by the time they landed his whole body ached.
He just feels rotten, so he's laying low, trying to get well enough to do what needs to be done in the upcoming weeks.
Since he and the boy cats had been snoring away together for two days, I decided on Sunday afternoon that I would take a walk and see if I could catch a glimpse of autumn color in our area, to celebrate the first day of fall. 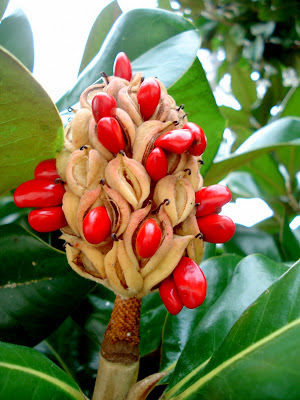 The magnolia pods are already casting their shiny red seeds.
Aren't those seeds just gorgeous?
The pod is about the size of a woman's fist.

When I was in Canada visiting Lovella I asked her what was the name of the tree in her front yard. She said it was a magnolia, and I blurted out (with a shocking lack of good manners and grace) "That's not a magnolia!"

Turns out there are several types of magnolias; hers was a kind I had never seen before. Our southern magnolias have dinner plate size creamy white flowers that smell like a cross between lemon and jasmine. One blossom can scent the whole neighborhood. 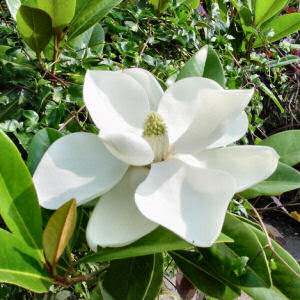 The center of the blossom always drops tons of stamen as it ages. As kids we would gather the stamen and play with them. (The photo above was from the internet, not this walk.) 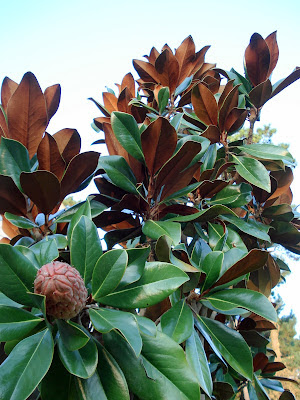 The magnolias around here have large glossy leaves, with rust colored backsides. I used to dislike the rust tones on the leaves, thinking they looked too autumnal as a backdrop for the beautiful white flowers. Now I think the rust color is a rather elegant touch.

(Oh, and another thing I used to do as a kid: I'd pull the glossy red seeds from the pods and a slightly sticky spiderweb like string would stretch between the bead like seed and the pod.) 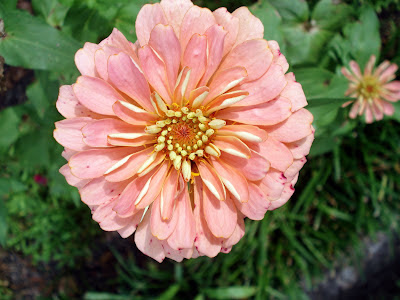 Our neighbor's zinnia's are still blooming nicely, and the pipetail swallow butterflies are usually to be found indulging in zinnia nectar. They are an extremely active butterfly, black with an iridescent blue wing that sparkles as they continually flutter. 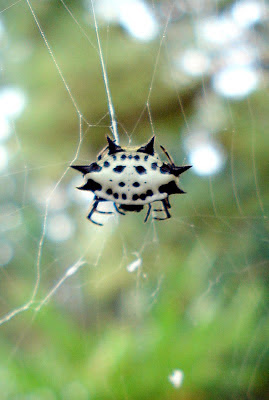 We've had this guy hanging around out front for about a month now.
I starting to really get a kick out of our spiders with their weird smiles.
Isn't that a great goth look?
(The spider is actually very tiny, about the size of a baby pea.) 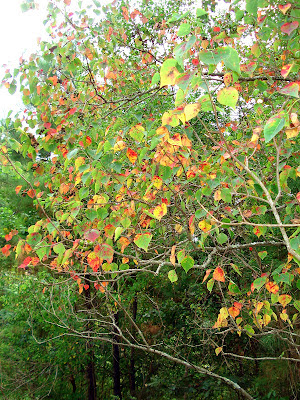 The Chinese Tallow tree is always quick to throw bright fall colors. It is considered a "trash" tree as it never gets thick enough branches to do anything with.
It is also an invasive species, but everyone is so pleased with its color change that they don't want to get rid of it! 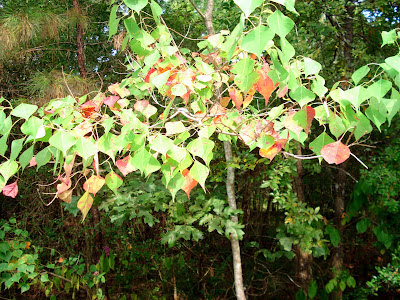 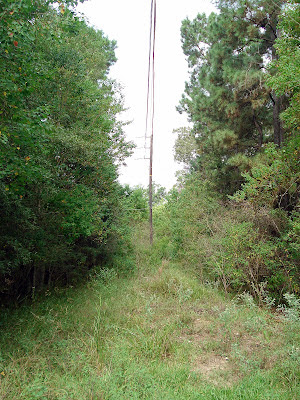 A clear cut area for power lines. I can position myself to take a picture each week and watch the seasons change over the coming weeks. 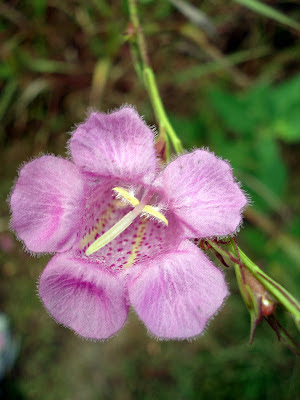 One of the flowers that are blooming along the path through the prairie area.
Kingwood actually has a budget for prairie land reclamation; trees that grow in the prairies are pulled up. It makes a nice mix to have both woods and prairies to explore. 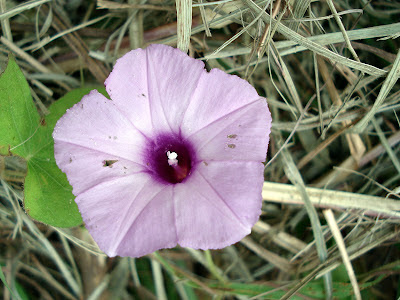 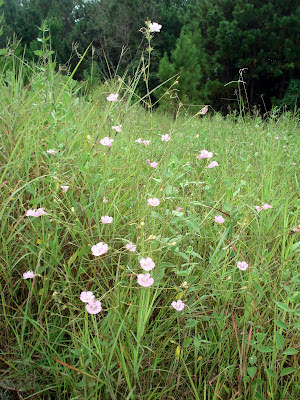 How the flowers looks along the way. 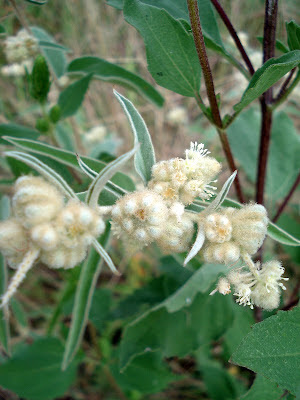 Another very soft looking kind of flower. It has an herbal sweet fragrance 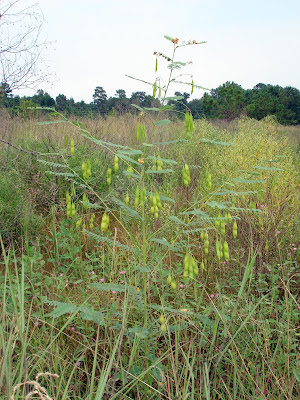 The prairie with a small locus tree in pod. 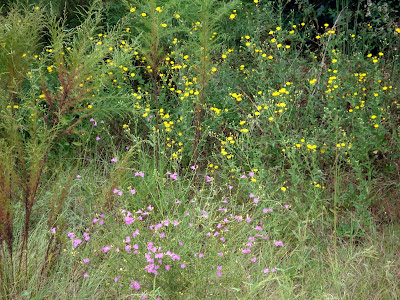 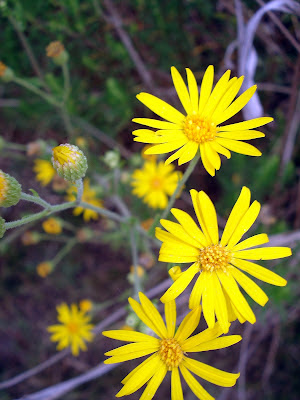 Close up of the yellow flowers. 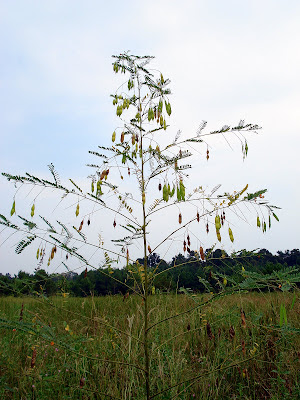 Another locus on pod with slightly overcast sky. The temperature was just vaguely not hot.
"Not hot" is a good thing. Something like 88 degrees. 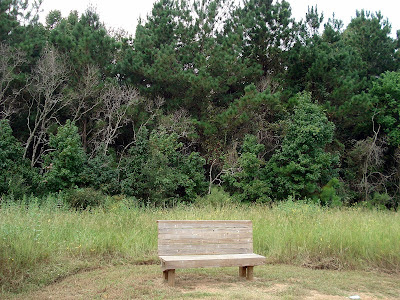 Another place with a view that I want to use to track fall color change. 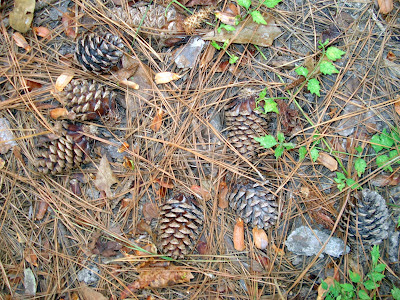 Pine cones are suddenly on the forest floor. As a Southern California child I used to just adore the idea of walking in the forest and picking up pine cones. These pine cones were cute, plum sized and there were a few larger ones, but since I have to pick up pine cones that fall in my back yard anyway, a bit of the thrill is gone.
Isn't that sad. 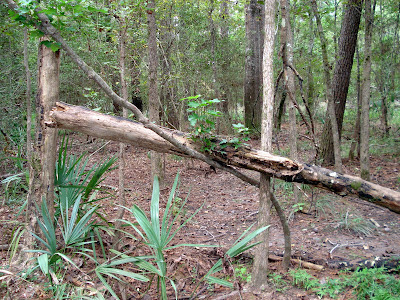 I was amazed by this: A big tree had fallen, and it was caught by a tiny tree, which was supported somehow by another tree.
There's a sermon in there somewhere.
The tiny tree's tip has turned brown, but elsewhere it is putting out new leaves nicely. 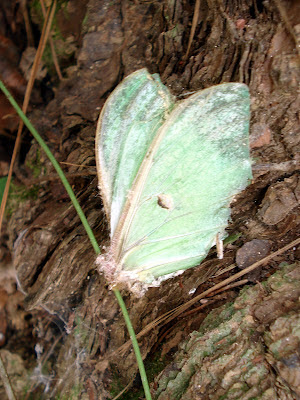 Only the wings are left of this beautiful insect. The wings are very large, about three inches in length. I wonder what happened to it that it could be so very neatly eaten. 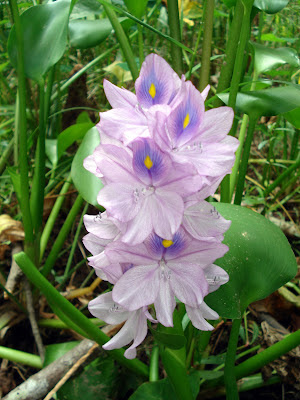 Water Hyacinth above is an invasive species as well. It can spread and choke out a body of water in nothing flat.
Gorgeous though, isn't it? 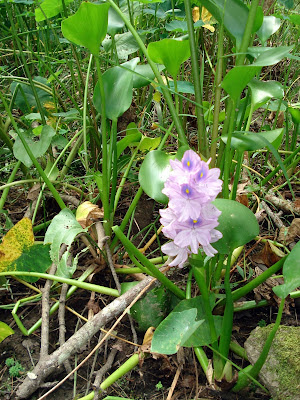 If the plant spreads, the forest management people spray the leaves and it disappears. One day a whole inlet will be covered in the flowers, the next day it will be all gone. Amazing. The flowers look so much prettier than the murky water, but the water when covered with the plant can no longer support fish and wild life. 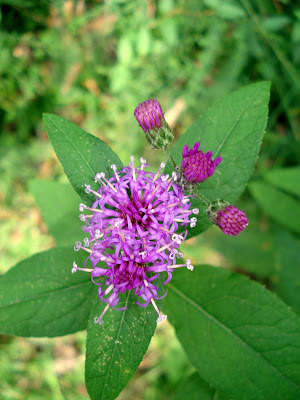 (Don't know name...must get field guide...funny how so many things in the woods right now are purple!) 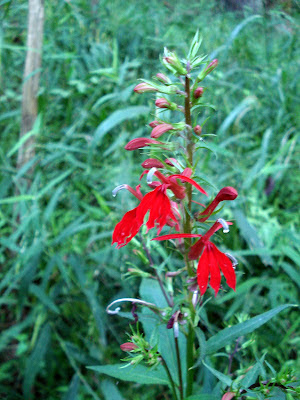 There was only one of these plants. 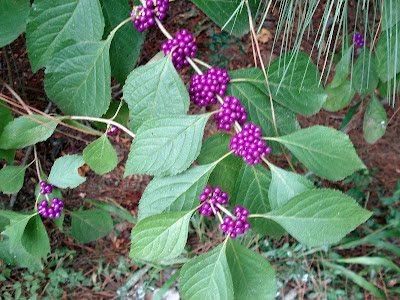 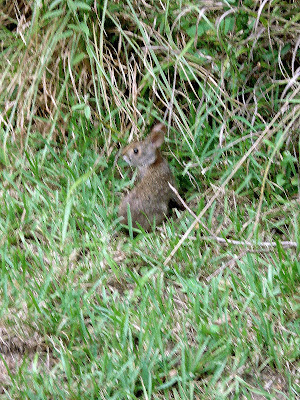 Well, I'd better be hopping along now.
Hope you enjoyed my tail, er, I mean tale of my walk.
Posted by Thoughts on Life and Millinery. at 12:17 PM

Ooh those flowers are so great. I really enjoyed my walk. Your magnolias are the ones that are sold as silk flowers here. They are the real ones I'm sure. Our Canadian varieties are just cousins.
I also noticed the purple berries. I've seen fake ones of those here as well. Here all along I thought they didn't truly exist.

Beautiful pictures, Jill! Poor Bernie. I hope he gets over that cold soon. There's nothing worse than being completely incapacitated by a cold that comes with aches.

We have those same spiders here in Florida, too. They build their webs up high inside the pool screen enclosures. They're called spiny orb weavers. (Doc says they remind him of the evil and ugly Darth Maul from Star Wars, episode 1.)

Hi Jill, thank you for taking us on the walk with you. Beautiful things to see. That spider is something else! Never thought I'd say a spider is "cute" but he is. Texas seems to have some very interesting looking spiders. I've never seen anything like them here. Just black widows and violin spiders and daddy long legs...

Loved your walk! Your shot of the magnolia pod is spectacular too. My first ever "art" hat was a Southern Magnolia. I puzzled for a long time about how to represent the stamens (petals were satin and leaves that clutched the head were felt). I ended up using a small piece of red felt with beaded pins for the stamens. It made the show.

Love those fuzzy little prarie flowers too. Yes, we do need a Field Guide for the splendid variety of flora.

Thanks for sharing the walk, had a good time on the trail with you.

I had a great time walking along with you... I wish I had really been there! (I almost felt I was there which brought a smile to my face). I hope Bernie gets well soon!