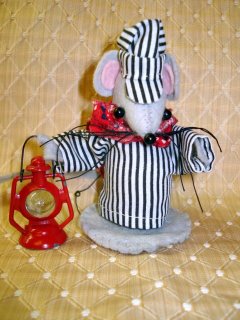 In case you are wondering, I have fifty mice.
Roughly.

The train mouse; how cute is it that Bernie's grandpa, the one who started the Christmas dishes, retired from the Union Pacific Railroad. The little lantern fascinates little kids (and me too!) 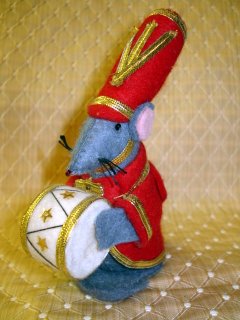 My brother-in-law Mark played drums for years. He even had a video on MTV and a picture in the Rolling Stones magazine. Of course, he dressed in rock and roll drummer garb.

I think this is MUCH cuter on drummers. 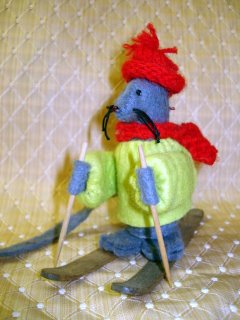 Ski mouse was a gift the year Bernie wanted to start skiing; finances, small children and common sense kicked in. If he broke his leg we would have had no income as he was in construction at the time.

Bernie skis a lot now. In fact we'll be in Salt Lake City the day after Christmas so he and Jeff can carve the slopes together.

I eschew skiing. Ow. Scary. Cold. No. I've tried to like it, and tried it several times. Last trip capped it for me. 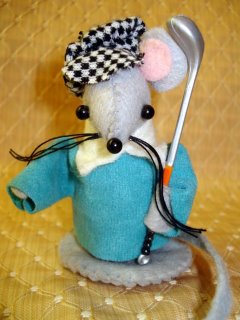 Oh no. We're in San Diego right now, visiting LauraRN, my folks and Bernie's folks and his sister's family. Saturday Bernie will head to the links with friends.

Skiing and golf. Ah, life is good for a Bernie.
Posted by Thoughts on Life and Millinery. at 11:00 AM

Niiiiiiiiiiice hats on these mousies! No wonder you've become a milliner. K Q;-)