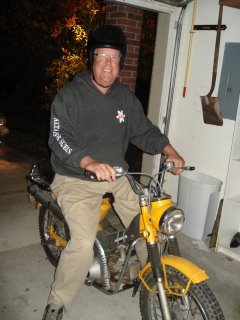 We're a pretty dull couple, to tell the truth. Bernie will slump in front of the TV most evenings while I read or surf the Internet.

Occasionally though one of us will get up the energy for a date night that goes beyond just heading out for Mexican food and a run to the mall.

First we took a walk through the woods and lake front down the street from our home. The mosquitoes were tolerable, and we needed to get our heart rate up, so by walking briskly we avoided being bit and simultaneously enjoyed the warm foggy late afternoon.

I guess that invigorating walk pumped my creative energy up too.

After returning home I was messing around in the kitchen, trying out a new bread recipe when the door bell rang.

I peeked out, and there on our porch were four boys, the "Our Gang Comedy" set that plays ball and ride bikes and generally does all the stuff that eight to ten years of age boys ought to do. Complete with a crazy dog named Sunny.

I opened our door, preparing to be hit up with a candy sale or some other kind of fund raising pitch. Instead, the boys opened their mouths wide and belted out a rousing chorus of Jingle Bells!

What a hoot! WHY didn't I take a picture??? Grubby boys in sneakers and tee shirts caroling, with nary a parent in sight. How delightful!
I rewarded them by offering them chocolates our candy dish, and they seemed genuinely amazed that they would receive anything for their serenade.

Is that wonderful or what?

So with "dashing through the snow" music still lingering in my ears, I asked Bernie out on a date.

"Wouldn't it be fun" I told him "if we could drive our illegal as heck Honda Trail 90 bike around the neighborhood and look at all the cool Christmas lights?"

Yes, that would be fun! So we put on our helmets and like Heck Angels, putt putted around looking at all the pretty lights. Children playing in the streets laughed hysterically at the sight of us tearing along at 20 miles an hour. 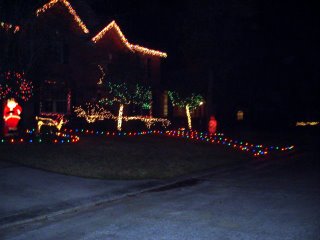 The neighborhood really does have some wonderful displays. 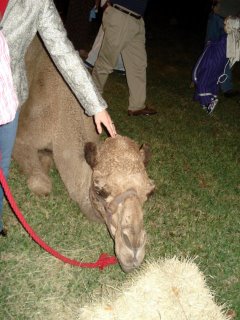 And as long as we were out running around, how about we drop in on our church's living Nativity scene and Bethlehem market?

Yeah! Let's do that too! That did mean actually going on Kingwood Drive, a four lane road, for a little bit. Daring!

The Living Nativity had sheep, goats, and a patient camel named Teddy.

His fur was wonderfully soft, and his odor was terrifically pungent.

While we were enjoying listening to the Nativity reading we bumped into our neighbors with the one year old.

Joseph was dancing and bopping around, but was not about to touch the camel.
Uh uh. No way.
Every time we suggested it, he grabbed his hands to his chest and violently shook his head. He did put his arms up for me to hold him. That was really neat...with all the people milling around I was surprised he recognized me.

I loved that small town feeling that came from running into neighbors at such a homey event as a living Nativity. There was even a real baby as Jesus! 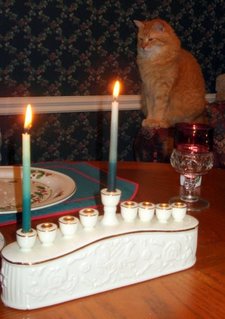 Once we got home we lit our Hanukkah candles.

We celebrate Hanukkah because Jesus did, as recorded in John 10:22. We like the celebration of a miracle that followed a group that stood up for their beliefs so long ago.

And we like how simple it is; light a servant candle (the middle one) and that candle is used to light the candle to commemorate the days. The idea of The Servant is so ingrained in Christian theology, it is lovely to have it so delightfully demonstrated in this ceremony.

That's why there are two candles burning for the first night of Hanukkah in case you were wondering.

Bernie went to Israel in 1974 while he was in Bible college. He bought what he thought was a menora, but it actually was a Hanukia. Menoras have seven candles, Hanukia's have nine.

This is a different Hanukkia than the one Bernie got in Israel. I usually use this white one when I use my fine china. Last night Bernie requested we use it, I don't know why. Just a whim I suppose.

In today's paper I learned something new about Hanukah. I'll quote the lesser known story here:

"On the first day of Creation, God created light. It's a special or "hidden" light that only lasted 36 hours. During Hanukkah, every Jew has a way to tap into the hidden and special light. At the end of the eight-day holiday, the candles have been lit 36 times."

Bernie and I had to get out our Bible to figure this out. At first we thought three days of creation before the sun and moon were made to make light as we know it. But that added up to too many hours. But then we re-read the first day of Creation, and indeed there was dark and light, evening and morning, so that would make the math right...three twelve hour portions of light that was present before the creation of the sun.

Interesting. I had never noticed that before!

While the candle burn we have a quiet family time, and often it is the most peaceful part of our Christmas season.

I usually make latkas one night during the season, and we enjoy spinning a driedle or two.
Tiggie really likes that part. He has his own dreidle that he likes to spin under things, so we have to go find it for him each night.

We haven't told him about betting on how the dreidle falls. Knowing Tiggie, he would probably find a way to win each time. Even if it took giving a little nudge with his whiskers.
Posted by Thoughts on Life and Millinery. at 9:45 AM

A camel! Cool! I haven't commented in a while so I thought I would say Hi!

Love those Jingle Bell Boys! Picture would have been fun but you paint a wonderful picture with words too. The date sounds like a hoot too. We had a date with a Christmas tree yesterday. Fun too. K Q:-)

I loved your blog. I couldn't stop reading. It great to read other middle aged stories. I'll be sure to visit again.