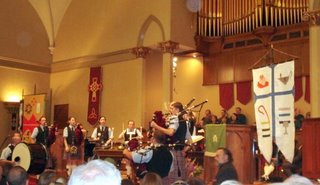 Attending church with my family.

Kirkin' of the Tartans: A two for one!

The Kirkin' of the Tartan has an interesting history. Allegedly, in Scottish history, after the Highland clans were forbidden to wear their plaids, the families kept a swatch of their tartans against their breasts, and at a certain point in the church service would touch the swatch as the clans were blessed.

This legend was told by Peter Marshall, the chaplain of the US Senate back in the 1950's. He was a Presbyterian minister, with Scottish roots. 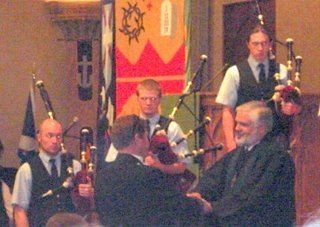 Soon there was a yearly tradition of having clan tartans brought to Presbyterian churches in America for a blessing.

A lovely tradition, don't you think?

And the fact that no one in Scotland has ever heard of such a thing is absolutely NO reason whatsoever to discontinue this "historical" tradition.

Now the First Presbyterian Church in SLC puts the "legend" on their website, and also all the astonished statements of Scottish and Canadian Scot communities explaining that they have never found a historical instance of this event on either side of the Atlantic.

I appreciate FPCSLC having the sensibility to admit that it is most like a recent invention, and a lovely one that they intend to continue celebrate yearly anyway.

And I suppose that, even though the day was also the factually historic "Reformation Sunday", it was a polite thing not to re-enact that day by going next door to the Catholic church and nailing up Martin Luther's observations all over again. Wasn't that whole Catholic/Protestant thing part of what caused the tartan banning in the first place?

It would be kind of funny though to every year try to sneak over and hammer on the Catholics door once again. Give the Catholics something to watch for and try to prevent, in a friendly rivalry.

Anyway, back to the Kirkin' ceremony.

The Utah Scottish pipers arrive. The Governor of Utah arrives, he, a staunch Mormon with Scottish roots vibrant enough to risk seating himself in the midst of the "abomination" which is what all but Latter Day Saint churches represent before God, at least according to Joseph Smith. 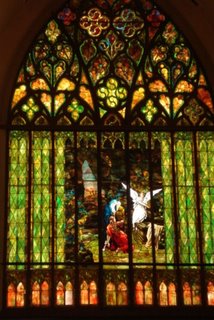 The banners of the Confessions of the Presbyterian Church are brought into the church along with the pipers and drummers.

Scottish hymns are sung. Then the SLC representatives of the various clans come forward, wearing their kilts, and carrying their tartan, which the Pastor touches and prays a blessing over each clan by name, over each member of each clan around the world and here in Utah.

Many of the presenters were the "official" clan representatives, commissioned for the event by their clan chieftain in Scotland.

I was touched by the blessing over the tartan of the US Marine Corp. I didn't know they had one.

Afterwards we all trooped down to the fellowship room where there was homemade Scottish short bread and tea to enjoy.
Lovely it was. We missed the Keile (I don't know how that is spelled) which is a party on Saturday night, which had a tea room and pub, and silent auction. Next year, when the painting is all done, that is on the "to do, don't miss list!" 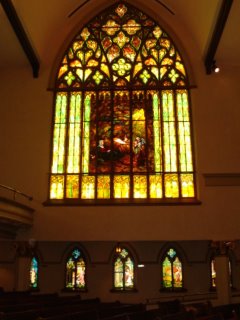 The best shot of the event I missed by having my camera set on movie setting. I'll tell you about it instead:

The sight of an older Scot, in kilt with a white background, walking up the hill, kilt pleats swaying, while all around him drifted down golden yellow leaves of autumn, glowing in the sunshine against a brilliant blue sky.

Posted by Thoughts on Life and Millinery. at 11:45 AM